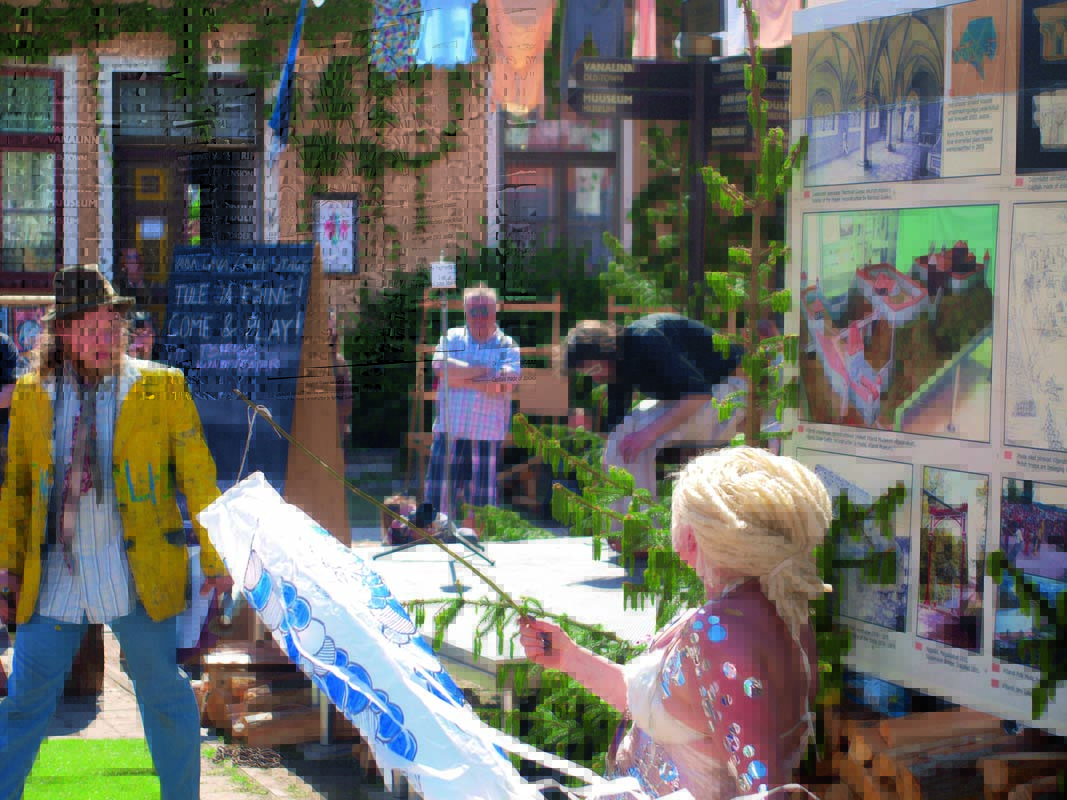 Viljandi, a town of 18 000 inhabitants in southern Estonia, and other historically significant county centres have been known amongst architects as the nodal points of the spatial settlement structure in the country. Towns such as Rakvere, Haapsalu, Kuressaare and others have been the supporting pillars of several Estonian areas and they will continue as such in the future. The architect Toomas Paaver believes that due to Estonia’s small size we are in fact privileged and should not call these towns small, but medium, normal-sized towns. In order to reanimate ordinary towns, we should emphasise each town’s specialisation and spatial peculiarities. Viljandi has chosen traditional handicrafts and keeping music alive as its speciality.

Talking about Viljandi’s (visual) art life, it must be admitted that it is either lacking or, even if it exists, it is not in my opinion self-sufficient, but is linked with broader topics, such as maintaining and developing the living environment, and fighting against sinking into the periphery. However, viewing the situation from a more positive and wider aspect, we see a lot of top-quality urban space, and various important cultural institutions; there is an audience who enjoy culture, good entrepreneurs/wealthy supporters and a strong identity directed at creation.

Viljandi Gümnaasium (grammar school) is the first of its kind to operate at the rural level in Estonia. The school’s annex received several architectural awards and its interior is adorned by the best examples of commissioned artworks: the paintings of Merike Estna. With the seven study plans the school offers, the pupils can choose the best suited to them out of a dozen optional subjects, plus it is possible to enjoy nearly fifty free subjects. During the last study year, I was fortunate to supervise the subject called “curating contemporary art”, which is probably not taught in any other secondary school in the world. The result of the course was an exhibition, which attracted a lot of attention, in the Viljandi town gallery on the topic of bodies. Several prominent Estonian artists participated as well. Secondary school children do not, on the whole, take part in social life, but their contribution to cultural life in Viljandi is quite remarkable, both as audiences and creators.

The Viljandi children’s art school represents a special species in the Estonian hobby schools scene, trying to interpret and reinterpret the supporting pillars. On the initiative of the director, Kristjan Mändmaa, the teachers are young and talented artists who, besides developing children’s manual skills, instruct them in how to critically and conceptually relate to making art. In addition to the Waldorf school, which offers more extensive education, a new school will be established in autumn 2015. Supervised by the educational activist Piret Anier, the school in its utopian (spatial) programme aspires to integrate basic and hobby education, synthesising traditional with the most radical teaching methods. I mention this educational establishment opening in an old factory building because Viljandi’s alternative education, just like its art, theatre, dance and literary life, largely proceeds according to the rhythm of ecological communities as described in the research compiled by Airi-Aliina Allaste.

The Viljandi Culture Academy is a college of the University of Tartu. The bold and straightforward aim of the four departments (performing arts, culture education, music and native crafts) is to honour and develop traditional knowledge and methods. The clearest results of perceiving the primal spirit can be seen in music: several graduates have skilfully synthesised the wisdom of tradition with contemporary rhythms. Unfortunately, no artistic sparks are flying among the young performing arts in Viljandi. It seems that it is easier for musicians to relate, via the internet, to the rest of the world and to position themselves than it is for young actors, who must first justify themselves to the local conservative theatre audiences.

As Viljandi is known in Estonia as the capital of the self-taught and outsiders, it is not surprising that the country’s only naivist museum, the Kondas Centre, is here. Besides the permanent exhibition of Paul Kondas’s paintings, the museum organises over 30 exhibitions a year, half of which introduce marginalised creators. The art museum, which examines cultural borders and the topic of the periphery, is a community centre for Viljandi’s art people, a place to pop in any time for a chat.

The Viljandi Town Gallery operates in the conference hall of the town library. Although the room is all right, it’s pointless to exhibit space-sensitive contemporary art there because once a week the hall must accommodate up to one hundred people when the town rents the space out for extra income. The absence of a proper town gallery is also the main problem in the art life of other Estonian towns.

Enn Põldroos’s private museum opened in 2014. The grand old master presents his recent work there, and the public might not even be aware that this is one of the most significant Estonian painters of the second half of the 20th century. The museum, with its enchanting interior, exudes the aura of provincialism, which is quite ironic as Põldroos as an artist has always been emphatically cosmopolitan. In a museological sense, the room is certainly packed with meaning, but will probably bear true fruit only in a few decades’ time.

Rolan Paul Firnhaber’s home gallery Imagi opened at the same time as the Põldroos Museum. Firnhaber is an American anthropologist with German roots, an authority on cave paintings, whose PhD on shamanism was supervised by Mircea Eliade. A decade or so ago he decided to buy a summer house in Viljandi County and a few years later moved permanently to Estonia. His home is a magical treasure trove for Viljandi’s art people, where the enthusiastic host has gathered many artefacts that have travelled with him all his life. He can now archive them at home at his leisure. He has enough stuff for several exhibitions, if not for a museum. Firnhaber is the miracle of Viljandi, and we do not quite know how to look after him and introduce him to others.

The Koidu community house, the White Hall in the aeroplane factory (in the 1930s, aeroplanes for civil use were produced in the Viljandi town centre), and Wimka, curated by students, are the most recent project spaces in Viljandi. As non-institutional efforts, they are still struggling to find a place in the cultural arena. The community house was built in the early 20th century as a grand theatre building. It is now warmed by choreographers, artists, art historians and theatre people, who besides the regular cultural programmes are trying to get an international residence programme going. In recent years, the building has been a stage for notafe, an excellent example of local activities with a global reach. The White Hall is the public rehearsal room for experimenting students in the performing arts. Experimentation is crucial in a town the size of Viljandi, as it indicates that people believe in working in the local context: spending and investing time, energy and money. The litmus test of the experiments is the number of interested people. Performing to empty halls crushes the spirit of even the most ardent enthusiast. I have delivered what I believe are exciting talks to an empty room at the Kondas Centre and, trust me, it gets you nowhere. On the other hand, even five eager listeners are enough to have a very encouraging effect. Still, is an art programme for five people really sustainable? The main issues therefore are: for whom, why and what to do? 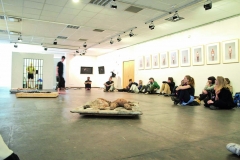 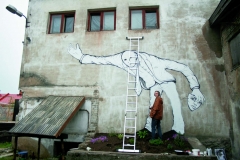 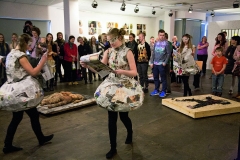 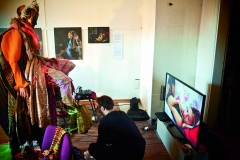 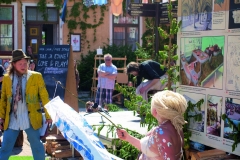 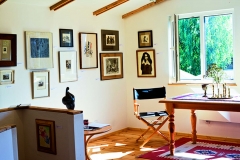 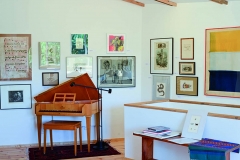 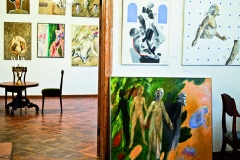 3 The list of Imagi’s upcoming exhibitions, and an overview of Firnhaber’s art collection are on http://www.thegalerii.com.

Gregor Taul read semiotics at the University of Tartu and art history at the Estonian Academy of Arts and at University of Technology and Design in St Petersburg. Currently works as a curator at Kondas Centre in Viljandi and teaches at various schools.