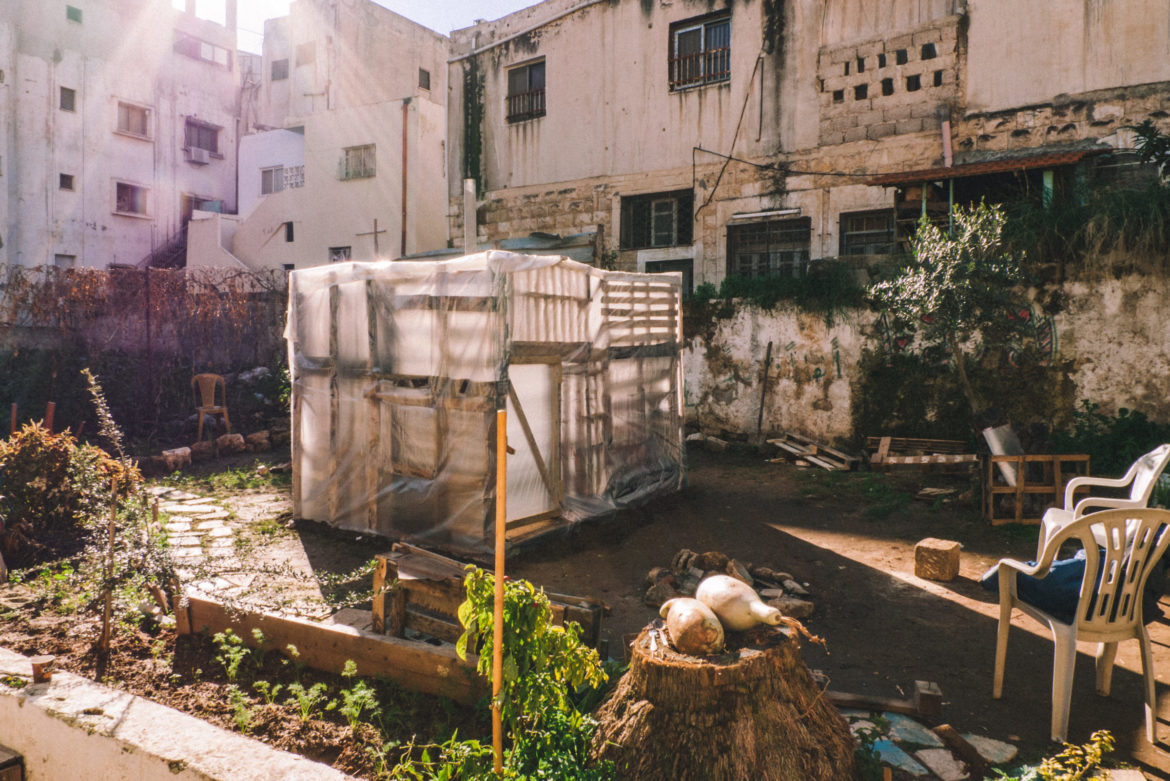 The Transformation of Interior Architecture Studies by Professor Hannes Praks

Why should a university department of spatial design be an object of study in an art magazine? We know of cases where fine arts faculties or whole art academies have acquired such authority and influence in the art world that the creative output as a collective author has made a big difference in art history. Internationally, some of the first institutions to come to mind are Vkhutemas in 1920s Moscow, Black Mountain College in the backwoods of North Carolina during the 1940s and 1950s, Joseph Beuys’ tenure at the Düsseldorf Academy of Art in the 1960s and, of course, Bauhaus, with its studios reflecting the mindset of respective tutors. The case of Hannes Praks, a professor in the Department of Spatial Design at the Estonian Academy of Arts since 2014, bears a structural resemblance to the Bauhaus legacy. Praks has turned the otherwise pragmatic discipline[i] into a trendsetting hub of visual arts and design in the region. It has been said that he runs the department like the bewildering front-man of an up-and-coming rock band, which, alas, may signal a similarly meteoric downfall. However, this is not likely to happen, because, as we will see, Praks and his academic staff – despite their experimental methods – are rooted in tradition and preservation. To prove my point, I will mention some key aspects of the work they are doing. 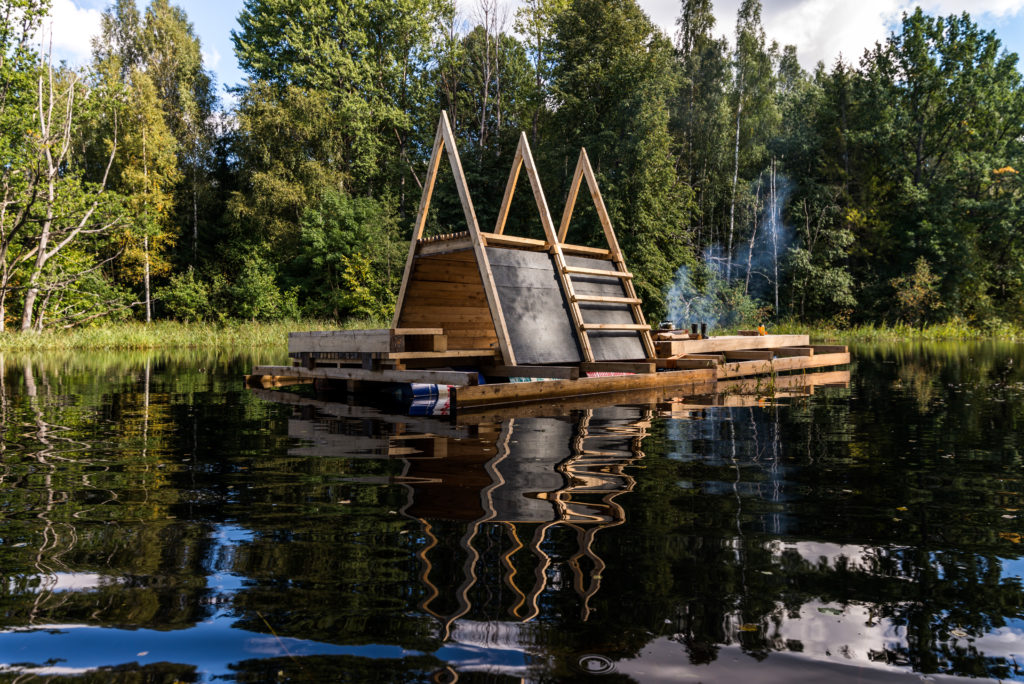 With an emphasis on the wilderness and the unpopulated Estonian forests, it is not surprising that most of their courses focus on wood as the primary material and resource. The semi-public sauna opened in the school’s courtyard (in fact students tend to leave behind DIY saunas where-ever they go, whether Palestine, abandoned houses or a river deep in Soomaa), the exceptional scaffolding around the Baroque altarpiece in Tallinn’s St Mary’s Cathedral or the yakisugi (traditional Japanese burnt wood) – style exhibition design in the Museum of Estonian Architecture. Besides timber, other archetypal materials include straw, different leftovers and human bodies (crucial in the aforementioned exhibition). The employment of primeval materials reveals that the department is oriented towards the beginnings of culture. The cultural semiotician Juri Lotman argued that young cultures tend to highlight their origins, wishing to present themselves as immortal, or at least the fact that they are at the very beginning of their journey. We could say that this is also the case with Praks and his department. Even if the history of teaching interior architecture is much older, Praks has managed to present his field as a novel discipline that has much to say about the contemporary world. 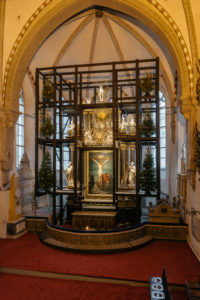 On the other hand, the prioritizing of traditional raw materials and working methods indicates a denial of the synthetic screen-glued idiotized world. Actually, one of the formulas of the department could be: any tool, method or text younger than 200 years should be regarded as a suspicious element! Indeed the professor goes around with an ancient mobile phone, freshmen are required to keep diaries and their sketchbooks are assessed at the end of the school-year. What should we make of such romanticism? I would like to borrow a song title from Vaiko Eplik and call this kind of strategy “erotic realism”; it is an approach which unites the utopian imagination of magic realism with the eroticism of architecture, demonstrated by the likes of Roland Barthes and Bernard Tschumi. According to the latter, the ultimate pleasure of architecture is that impossible moment when an architectural act, brought to excess, reveals both the traces of reason and the immediate experience of space. I presume that the department’s sublime barley field grown in the middle of Tallinn’s largest residential area, its special emphasis on drawing classes, its preference for walking and cycling over other modes of transport, and its insistence that these are trustworthy methods for meaning making all have one goal: to prove that these are all real things which matter, that erotic realism turns thoughts into matter.

Most of the publicized student works don’t look flashy and contemporary, but rather old-fashioned and elegant. Tutors seem to have stressed that the ideal visual form does not precede, accompany or follow our time, and that, furthermore, there is no need to browse through design magazines in search of examples. Rather the ideal – the quest for the ideal – is hidden in the nature of all things. The ultimate model always escapes us; some try hard to catch it, while others get tired and give up. It is important to demystify such social constructions by broadening students’ perspective on these issues. Inviting enormously experienced old school masters, such as Vello Asi and Leonhard Lapin, to give classes, has been, in my opinion, perhaps the most positive change instituted by Professor Praks. The biographical exhibition of the department’s history at the Museum of Estonian Architecture was another event which brought much sought-after historical knowledge closer to the students. On the whole, the department has made good use of the exhibition genre as a specific educational platform and a tool for knowledge production. Exhibitions legitimize the seeming disorder of things and bring the viewer’s experience into the spotlight. Designing and co-curating exhibitions is an essential part of resolving universal problems for future experts of spatial design.

Human beings not only inhabit space, but also think spatially. How to guide students so that eventually they will know what they want a certain space to be? Praks suggests that one of the key methods is to frequently shift in space. One simple example is drawing, i.e. moving one’s mind and body in relation to the image on paper. Another possibility is having classes anywhere but the school. It is a custom that freshmen start their studies with a week-long bicycle trip to a place they are completely unfamiliar with; drawing courses take place in a deep forest in the middle of winter; second-year students start with a survival trip with no money or telephones to a megacity; entry exams take place on a remote island; and the school has opened a project space on wheels. 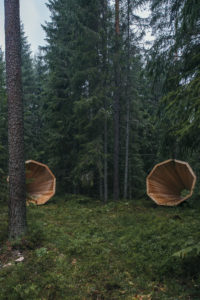 Last spring the project space, which is actually a long-distance lorry trailer, took senior students to Amsterdam’s Gerrit Rietveld Academy, where they were assessed by the teachers of the prestigious design school. This was, in my opinion, maybe the most problematic project of all, especially when we compare it to the other undertakings. If the mountain won’t come to Muhammad, then Muhammad must go to the mountain, right? I would have thought that the department’s recent activities might have suggested a more unconventional and certainly less expected “mountain” to be climbed, although it may be that the idea behind the straw-furnished lorry-school was to tease the Dutch institution. Perhaps I am over-emphasizing the department’s peripheral anti-establishment discourse, and it was all about giving a great experience to students.

Yet the centre-periphery question is of great consequence from poetical, ideological and political perspectives. Some years ago I gave an utterly failed speech in the Estonian parliament hall in front of a conservative, 100-strong audience, suggesting that in order for our culture to thrive, some things have to be done in English, and suggesting that the Estonian Academy of Arts should be an entirely English-speaking institution. I guess everyone in the room was against the plan, as would have probably been the 101 MPs who otherwise inhabit the space, and who have, however, managed to do everything to support further internalization (or “Englishization”) of higher education. I believe this to be the case in every non-English speaking country in the world, or at least in Europe. National support for science and culture in the local language is strong, but practical and economic reasons overwhelm it. In any case, in 2016 spatial design became the fifth MA curriculum at the Estonian Academy of Arts to be taught in English, with four of its first six students arriving from overseas. These are minute numbers on the international scale, but in a country with a single MA programme in the field, it is understandable that the conservatives feel annoyed. All in all there are no convenient ways to estimate cultural impact, either in numbers or words. We can take a more objective look at our time in 50 years.

To balance the glorifying rhetoric, I want to provide some criticism, or at least address some of the dangers apparent in Praks’ professorship. An elderly German teacher once told me this joke: in the 1920s teachers intended to turn pupils into socialists, and out came the Third Reich; Nazis pushed right-wing upbringing, and the result was socialism. Perhaps this story shows that it’s OK for education to lag behind 20 years. Galloping ahead may have undesirable effects.

Secondly, I am wary of the fact that practically each new project, workshop or exhibition by the students has (successfully) targeted (international) media attention. In contrast, I have heard that theatre schools do not allow their students to publicly perform before the final year. There must be a good reason for this. Some of Praks’s students have already had more publicity than most architects get throughout their careers. What about the less outspoken students, or those who work hard but do not get any attention and feel stressed about it? Probably by now introverts are even afraid to apply to the school. At the end of the day we need to bear in mind that publicity forms only a small proportion of a phenomenon’s cultural relevance.

Finally, perhaps the main context of Hannes Praks’s radical professorship is the discussion launched by the Estonian author Valdur Mikita’s trilogy about the wild linguistics–linguistic wilderness of Estonia. Mikita, an original and independent thinker writing about the natural and cultural history of the land, has managed to create a popular parallel reality in which the oddities, absurdities and shortcomings of the regional psyche are presented as the esteemed “new normality”. He has managed to turn upside down the basic binary oppositions which define the normative spatial relations we use for making sense; the use of the wor(l)d “down” (caves, fields, tunnels and chthonic forces) replaces “up” (paradise and progress), left becomes more right than “right”, East turns out to be deeper and more useful than West etc. In a way, the students and teachers of spatial design have continued this playful dismantling and replacing of the “binary pillars” of the society. All things considered, it is a master class in translating entropy into knowledge and then voluntarily messing it all up again to provide yet another chance to form cosmos out of chaos.

[i]   Spatial design – or interior architecture and furniture design as the programme was called before Praks took over – has for years been the most desirable programme at the Estonian Academy of Arts, possibly due to the profession’s imaginary position between creative bohemia and luxurious lifestyles.

Gregor Taul (b. 1986) is a critic and curator currently living and studying in Lisbon.