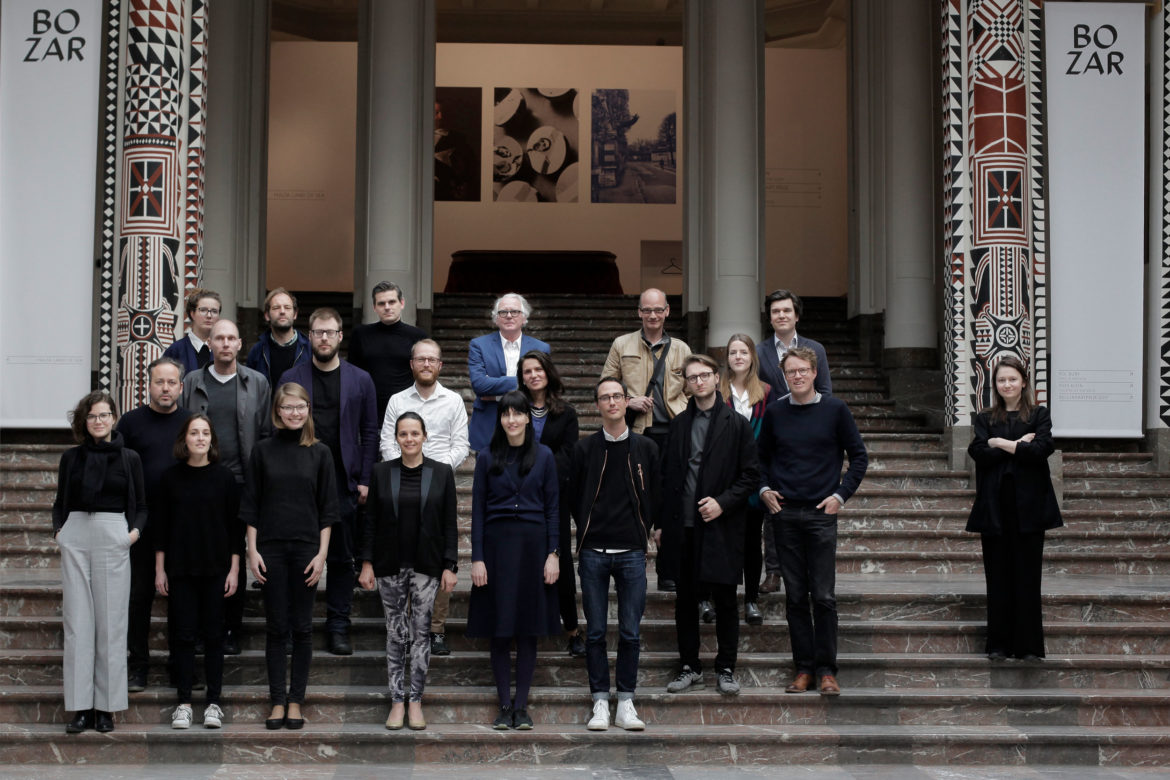 A Laboratory for Symbols. Reflections on Today’s Europe[i]

Ah, all is symbols and analogies!

The wind on the move, the night that will freeze,

Are something other than night and a wind –

Shadows of life and of shiftings of mind.

Everything we see is something besides.

The vast tide, all that unease of tides,

Is the echo of the other tide – the sea

Alluned – there, where the world that is is real.

Everything we have’s oblivion.

The frigid night and the wind moving on –

These are shadows of hands, whose gestures are the

Illusion which is this illusion’s mother.

Fernando Pessoa, Ah, All Is Symbols[ii]

In Search of Symbols

In April 2017, on the advent of the Estonian Presidency of the Council of the European Union, the architecture workshop A Laboratory for the City of Europe brought together practices from Estonia (Salto, PART, Arhitekt Must, b210 and Kaos) and Belgium (L’escaut, Lassa, Delmulle Delmulle, Bogdan & Van Broeck and AgwA) to tackle the spatial culture of the European Quarter in Brussels.

After four days of group work, five cross-national teams showcased their initial ideas, which they will eventually present in physical form at exhibitions during the Tallinn Architecture Biennial in September 2017 and at the Centre of Fine Arts, Brussels (Bozar) in early 2018. At the time of writing this text, participants were still working on their projects and there was a long way to go before they applied the finishing touches. Therefore my task here is not to critically engage with the architects’ proposals, but to continue the discussion of the urban challenges in Brussels, with its many international institutions.[iii]

The curators (Aet Ader, with help from Bozar and the Estonian Centre of Architecture) suggested re-imagining the capital of Europe from five research angles: the symbolic deficit of the European presence in Brussels, the public space of the “EU valley”, security, e-government, and Brussels as a mirror of Europe (the city consists of various neighborhoods which in their diversity resemble European nation-states).[iv] Eventually b210 and AgwA addressed the characteristic debate concerning the Normalnull, i.e. the United European Levelling Net, which standardizes the height systems of the European countries. Salto and Bogdan & Van Broeck targeted the representative Station Europe, a former train station in front of the European Parliament, with the sole function of housing an interactive model of the Parliament. Kaos and L’escaut  proposed that Brussels follow the example of the Vatican as an emblematic self-sufficient entity. Must and Delmulle Delmulle suggested that the European institutions be scattered around Brussels to give them a more meaningful presence. Part and Lassa advocated for an e-bureaucracy sprinkled all over the continent.

In general, most of the groups focused on the ever-present question of what constitutes the European Union, how its identity is constructed and what this peculiar “Europeanness” is that demands to be translated into architecture and urban design. Fernando Pessoa said in 1932 that “Everything we see is something besides.” I do believe that this matter of symbols is at the core of any discussion of a unified Europe. Although dealing with symbols is tricky, as ideological narratives tend to simplify arguments and make them one-dimensional, we need to take extra care of our symbols.

The Belgian literary scholar Antoine Compagnon, a co-author of the notorious The Death of French Culture, has noted that “Ironically, what remains to this day undeniably European is the nation-state, the historical construction of national identities, of national differences, and their resistance to globalization.”[v] In his essay on European culture, he writes that a national identity requires a whole binding symbolic apparatus, whose elements include: a long and continuous history, exemplary heroes, an idiom illustrated with literature, emblematic monuments, folklore, sites and landscapes, a mentality, an anthem and a flag, a currency, a cuisine and costumes. According to Compagnon, a unified Europe is missing the inherited patrimony that fosters attachment to a territory or to a shared ideal: the absence of a European identity became obvious on the printing of the euro, which depicted fictions, not real places but abstract architectural styles, in order to harm no one. The question is whether we need to create and develop a “transnational” identity apparatus for a unified Europe as the separate nation-states did in the 19th and 20th centuries.[vi]

Jürgen Habermas, the “Last European”, who has devoted his entire academic life to a united continent, has interestingly argued for a European Union where supranational political culture and local national traditions are somewhat kept apart. In his vision, there should be a common political culture, while the other cultural formations, such as the arts, philosophy and literature, would remain national (for the time being). Unified Europe’s political culture should be based on the idea of the universal rights of man, while the local cultures, religions and mentalities should be protected in their diversity. Compagnon summarizes his ideas in the following words: “Habermas speculates on a double culture or double truth of Europe, unified in the political realm – Europe, we might want to remember, is the only political organisation where the death penalty no longer exists – but plural and diverse in the community space.”

This is controversial and provocative. Habermas’ concept of a common political culture curiously relates to the idea of “political technology” – a term largely unfamiliar in the West – which is the euphemism commonly used in the former Soviet states for a highly developed industry of political manipulation. Why not treat the European Union as a no-nonsense apparatus for large-scale professional bureaucracy, instead of trying to adorn it with a cultural identity of its own? When it comes to the architecture of the European Union, shouldn’t we also treat it as a means of “political technology”? Although I deliberately exaggerate Habermas’ perspective, I sense that the more practical stand we take towards the EU, the more good we will gain. Hence, in an unpopular fashion, I would declare: we need more pragmatic, bureaucratic, inflexible administrative architecture obsessed with facades. Long live the Brusselization of architecture![vii]

Given the ambiguity of its physical status, Europe can only be an idea, an ideology. There is no symbolic architecture, nor public art without a guiding ideology. What is the European ideology? I can think of both deplorable and pleasant examples. First, this discussion reminds me of a story about Mahatma Gandhi’s visit to London. When asked by a journalist what he thought of British civilization, Gandhi replied that it would be a good idea. Keeping in mind all of the atrocities Europeans have carried out around the world, this story characterizes the tainted history of the whole continent. On the other hand, there is the European Enlightenment project and the promise of radical humanism, which at the moment is championed by such pro-European politicians as Emmanuel Macron, Sigmar Gabriel and Guy Verhofstadt. These guys seem to know the symbols heading the European ideology.

When Gandhi set forth to build up India as a modern nation-state, he understood that society would only arrive at democracy and equality through the inner struggles of its citizens. For Gandhi political life was not about large-scale political decision-making but lay in a process in which each and every member of the society would overcome his or her weaknesses. As Martha Nussbaum has put it: “Gandhi repeatedly drew attention to the connection between psychological balance and political balance, arguing that greedy desire, aggression, and narcissistic anxiety are forces inimical to the building of a free and democratic nation.”[viii]

I presume that Gandhi’s ideas would work for the European project as well. How can we represent and promote the idea of inner self-development in urban space? Could it be through a museum (such as the House of European History), a school (European schools are extreme examples of institutions which have already raised several generations of pan-Europeans)? Would an art academy in the middle of the European Quarter foster democracy, innovation and economic growth?

[i]        The title refers to Jacques Derrida’s seminal book on Europe: The Other Heading. Reflections on Today’s Europe. Bloomington: Indiana University Press.

[iii]       In fact, this is an age-old discussion in the European capital. Since the late 1980s a great deal has been published on the symbolic deficit of the European presence in Brussels. See, most notably, Vittorio Aureli, Brussels – A manifesto towards the capital of Europe, Rotterdam: nai Publishers, 2007.

[iv]       It would be tempting for me to point out some of the (more) crucial issues which were not approached but should be part of any discussion concerning the European space, such as Europe and globalization (instead of European values, one ought to speak of universal human rights and Europe’s responsibility in defending them globally), alterity, memory, and the pejorative model of the phantasmic Muslim, which has replaced the once infamous stereotype of the greedy Jew, and is driving Europe into moral collapse.

[vi]                   Currently, the budget for culture and the audiovisual represents 0.1% of the total budget of the European Union; hence, there is very little movement towards a common politics of culture.

[vii]       The art critic and historian Hal Foster recently referred to the political commentator Corey Lewandowski, who has said that we take Trump literally but not seriously, while his supporters take him seriously but not literally. These are important words to keep in mind while making fun of the Union, which we all owe so much.

Gregor Taul (b. 1986) is an architecture critic and curator currently living and studying in Lisbon.