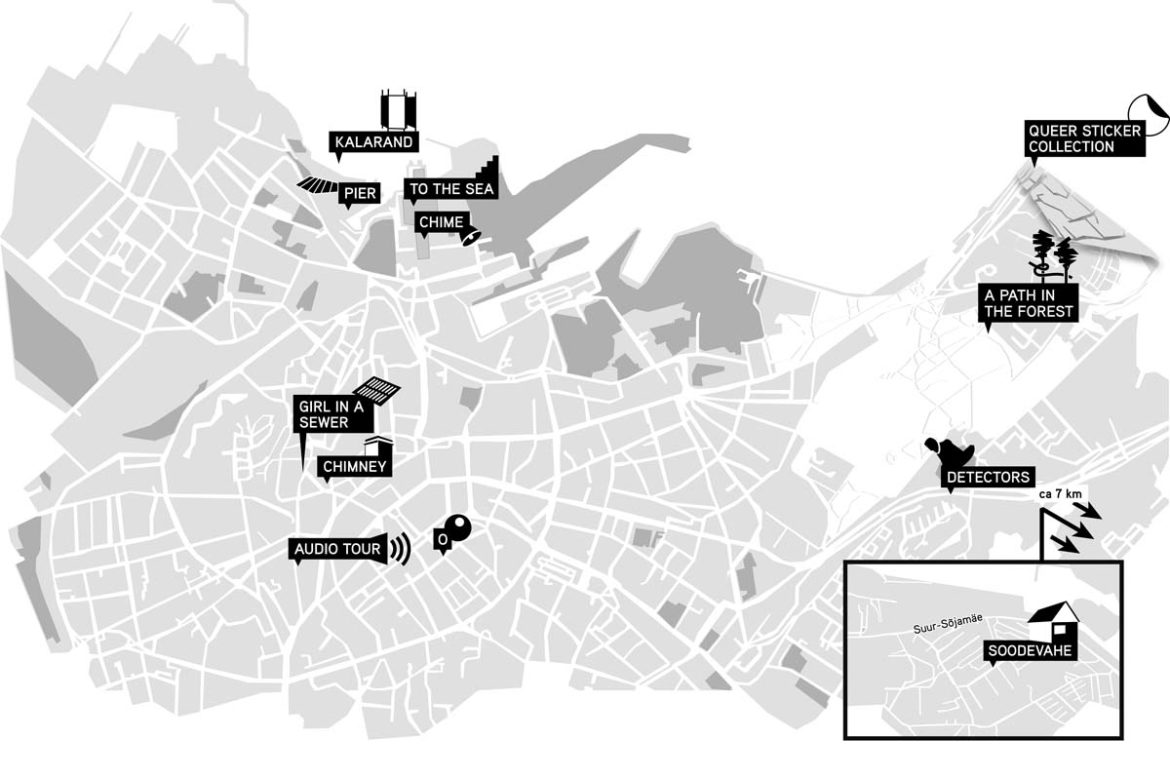 Tallinn is a town like any other: a diverse social and spatial association which allows material and space for different cultural practices, either spontaneous or arranged actions, permanent or momentary layers, soon to vanish from the urban space and consciousness. An effort has been made before to concentrate urban topics in the context of different events, although the issue of the town as a public space that belongs to everybody has not yet found any systematic outlet. In the year of the Capital of Culture, the urban installation festival LIFT11 (curators Margit Aule, Margit Argus, Ingrid Ruudi and Maarin Ektermann) took place from spring to autumn. It was the first undertaking of its kind in the public space in Tallinn, and it encouraged people to think about the many layers of the urban environment and invited them to discover the town and find more ways to use it. 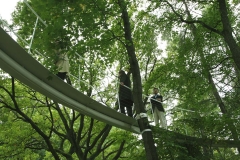 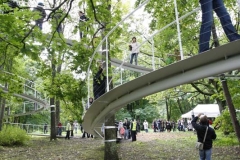 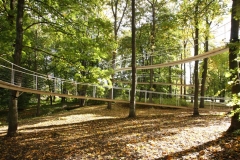 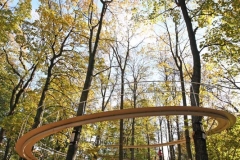 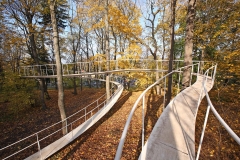 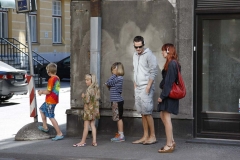 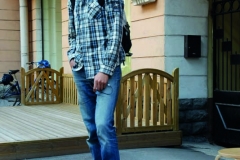 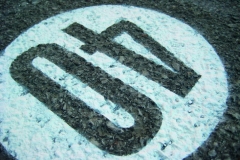 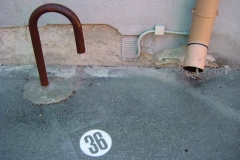 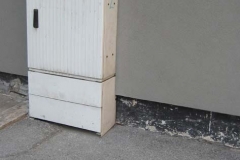 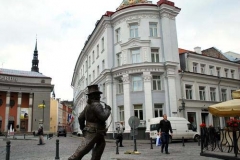 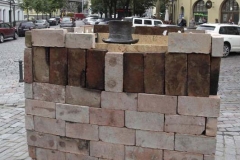 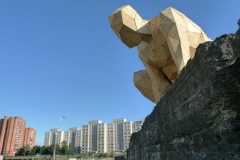 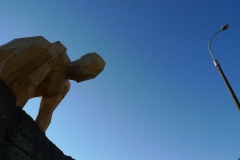 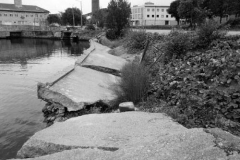 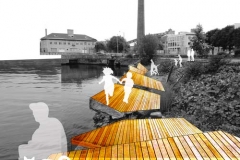 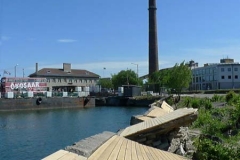 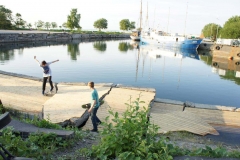 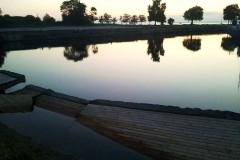 Contemporary urban installations, on the whole, try to sort out problems caused by mod- ernist society and the resulting urban space: the streets were transformed from places of work and leisure into temporary corridors between home and office. Although postmod- ernist culture has been criticising and easing the problems of controlled space for quite some time, today’s society and urban space are not a bit less ideologised. The rationalised and particularised idea of the bourgeois society visible in urban space has simply been replaced by the decisive role of the market. The change occurred after the principle form followed finance and was marked by commercialised and privatised city centres, the culture indus- try and tourism, gated communities or post- public spaces.1 Examples of the prevalence of post-public spaces and losing the public space can be seen in Ingrid Ruudi’s descrip- tions of how the curators, in preparation for the competition, had to map the locations for the participants, where public spaces actually were in Tallinn, or in Kadri Klementi’s work Audiotour, which through simple elements in the streets showed how ‘street space is busi- ness’, or is influenced by the all-embracing ‘philosophy of obstruction’.

Since the 1960s, contemporary sculpture and installation have been directly involved in criticising controlled public space and power relations, as well as psycho-geographical definitions. Eleven site-specific or moving installations selected in the LIFT11 competi- tion formed a kind of concentrated lesson on the topic of public space, including direct social criticism and actions that raised issues of space and place perception.

LIFT11 encouraged people to notice ‘different’ places and avoid ‘postcard images’ and, as a result, most installations were located away from active urban centres and busy locations. The works were meant for the city cen- tre, the Old Town, leafy Kadriorg and high- rise Lasnamäe, but the favourite place was the seaside wasteland area between the City
Hall and the Patarei (Battery) Prison. It is quite likely that many inhabitants of Tallinn found their way there for the first time during the Capital of Culture Year events. This area needs to be kept in the public eye because instead of developing the potential of a seaside city centre, Tallinn prefers to have apartment buildings and roundabouts, although economic pressure has temporarily turned it into a cultural location. On the other hand, the urban wasteland as a nodal point for events seems like harmless training: the designated use of space for the masses is not disturbed and those who control public space are annoyed from a distance – reality is not being signifi- cantly shifted.

At the same time, I do not think that the criticism is quite appropriate in the case of LIFT11, as enough attention was lavished on the seaside area. After all, it was central in the Culture Capital programme, and pri- marily because of the approach that made it possible to reconsider urban space rela- tions. The coastal ‘culture kilometre’, starting behind the Culture Cauldron (former power station) and running past old military and industrial objects, is the first ‘official’ public space in Tallinn based on the backyard idea, thus upsetting the concept of a main street and public space that requires quality back- ground architecture. Instead of admiring the power station’s grand façade, pedestrians see its industrial details, and the decorative regis- ter of this new street space is made up of side doors, ladders, ramps, chimneys, platforms and hooks. In that context, LIFT11 lo-fi pro- jects, such as Kalarand (fishing coast), creating a beach on an abandoned strip of coast, Pier, i.e seats-platforms on the deformed concrete chunks by the sea, and the 10 000 little bells called Chime in the grim tunnel of the City Hall are all perfectly situated in a suitable space and show how the changes are nothing more than a question of (re)thinking, or they are evident in mere ripples caused by tiny move- ments, and urban space becomes an exciting experience.

Most of the LIFT11 works encouraged people to perceive themselves and the urban space and notice the unnoticeable. We should mention a version of Tetsuo Kondo’s famous cloud path Cloudscapes in Kadriorg Park, called A Path in the Forest, Tomomi Hayashi’s instal- lation To the Sea on the City Hall roof, Audio Tour, which introduced Roosikrantsi Street as a socially determined environment, and the fascinating O (authors Aet Ader, Andra Aaloe, Kaarel Künnap, Grete Soosalu and Flo Kasearu), a huge inflatable black ball, which appeared and disappeared unexpectedly in various locations during the summer. It seems however that the favourite in the press and of
the inhabitants of Tallinn was Raul Kalvo’s Detectors – huge crouching figures on the edge of the road towards the Lasnamäe residential district. This classic method of investigat- ing everyday space and culture made people notice the mundane and habitual through alienation.

The LIFT festival actually presented only one serious social-critical action. The Queer Sticker Collection (curators Anna-Stina Treumund and Jaanus Samma), which labelled the town, was in a clear position, but was not much noticed. For me, the action organised by Timo Toots, involving the Soodevahe dis- trict of allotments that had sprung up near the airport, had an undertone of benevolent colonialism that inevitably accompanies such undertakings. However, a work that was not at first realised interfered most successfully in urban life: Chimney, a temporary installa- tion. This was supposed to surround the ‘bold and beautiful’ sculpture of a chimney sweep, which appeared in the Old Town as a result of the relations between politicians and their funders. The installation, which was banned by the author of the sculpture, Tauno Kangro, naturally became a symbol and was secretly realised early one morning by a group of activ- ists. The advantage of Chimney was its clear concept, which instead of adding something to the town tried to make the urban space and its political shaping visible by temporarily tak- ing something away from the town.

LIFT11 was the first serious attempt to point out the urban space and public sphere, or the lack of it, in Tallinn. It is impossible to say whether it succeeded or not, or at least this cannot really be measured. Still, LIFT11 did not aspire to solve real situations, but to encourage people to think about the town, and I am certain that there are now more inhabitants of Tallinn who do just that.