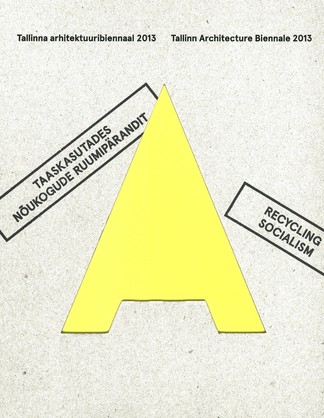 The publication covers both the events and exhibitions of the Tallinn Architecture Biennale, as well as the vibrations emanating from TAB post-factum. The substantial catalogue covers the Symposium of the Biennale, with presentations from Pier Vittorio Aureli, Andres Kurg, Robert K. Huber and Petra Čeferin and gives an overview of the panel discussions that focussed on intersections and differences in the broader Eastern European context as well as comparing possible future scenarios.

The section dedicated to the TAB Curators’ Exhibition introduces both the presented works as well as the research material concerning the buildings that provided the inspiration for the works. The exhibition is reviewed at length by Gregor Taul. The catalogue also provides great visual material from the unique space of Curators’ Exhibition – the Ceremonial Hall of the Estonian Ministry of Foreign Affairs in Tallinn. The Schools’ Exhibition is reviewed by Martin Melioranski, with ample images of the projects presented. The catalogue presents the winning proposals of the TAB Väike-Õismäe Vision Competition as well as a curated selection of the best ideas that sprung from the competition; Regina Viljasaar looks at possible future scenarios following the competition.