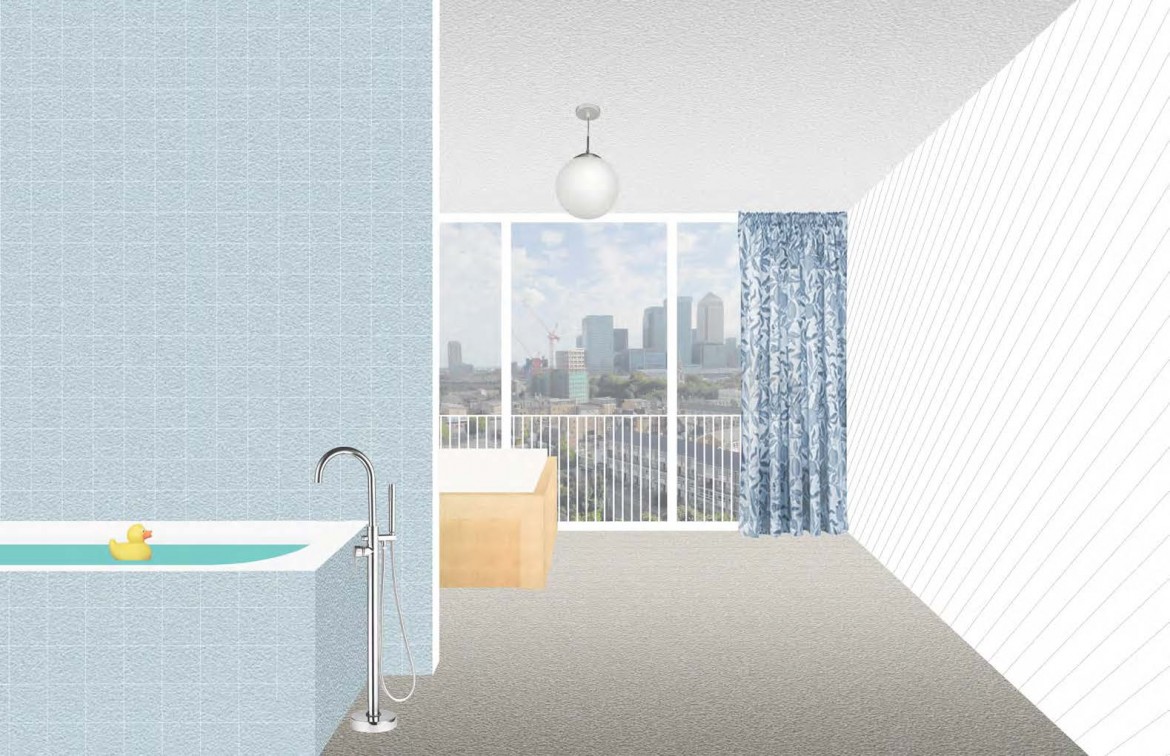 The London Festival of Architecture is a four-week long series of events offering a wide choice of various architectural and space-related undertakings: discussions, excursions, lectures, exhibitions, diploma work presentations in universities etc. In summer 2014, one part of the London festival was the International Architecture Showcase, organised by the British Council and partners. It constituted a fortnight’s residency programme, where I represented Estonia. My colleague architects came from Chile, Austria, Denmark, Nigeria, South Africa, Taiwan, Latvia, Iran and Uganda. In cooperation with British architects, various concepts for East London were developed.

London housing is for various reasons undergoing a crisis. According to the London Building Centre, London needs 42 000 new homes annually, but currently only 20 000 are added each year. Many of the new houses are built with the purpose of investment, and the developer often does not plan to immediately sell or rent the flats, because the value of even an empty building is increasing so quickly. In cooperation with the local architecture and research studio DK-CM, we analysed the current situation in the London accommodation market and designed a high-rise solution, where we tried to consider the surrounding environment and social situation, and suggested a business model of a cooperative which offers an alternative to the usual developer-buyer duo. A living space is a home for people – privacy, family, sense of security etc – although in legal terms it is purely a piece of property that can be measured in square metres and in financial terms. Soft values and poetic dreams add financial obligations which people have to take into account every day. 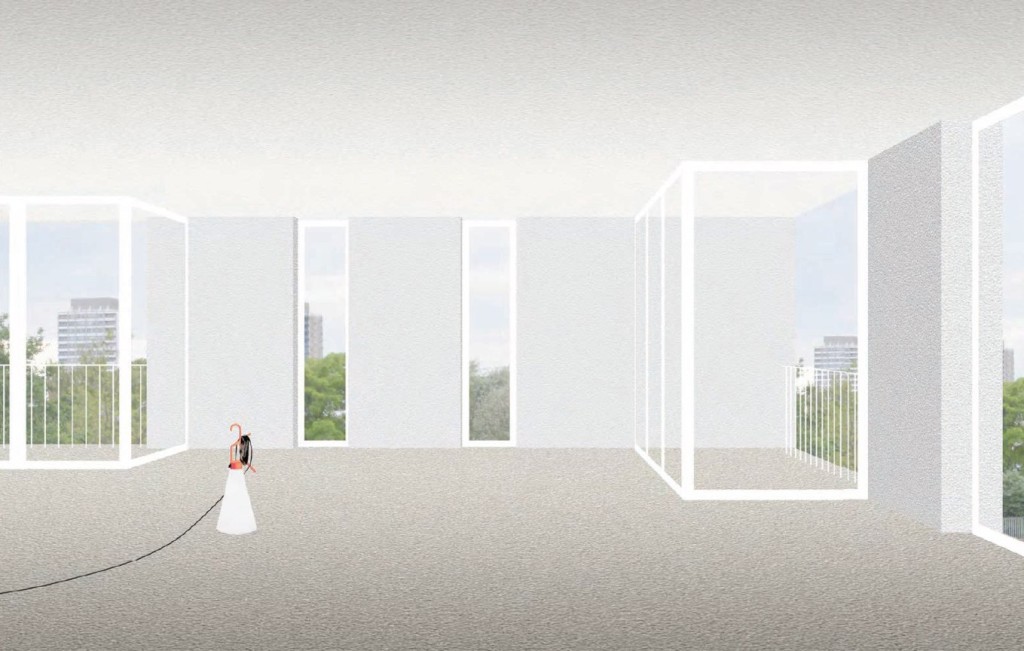 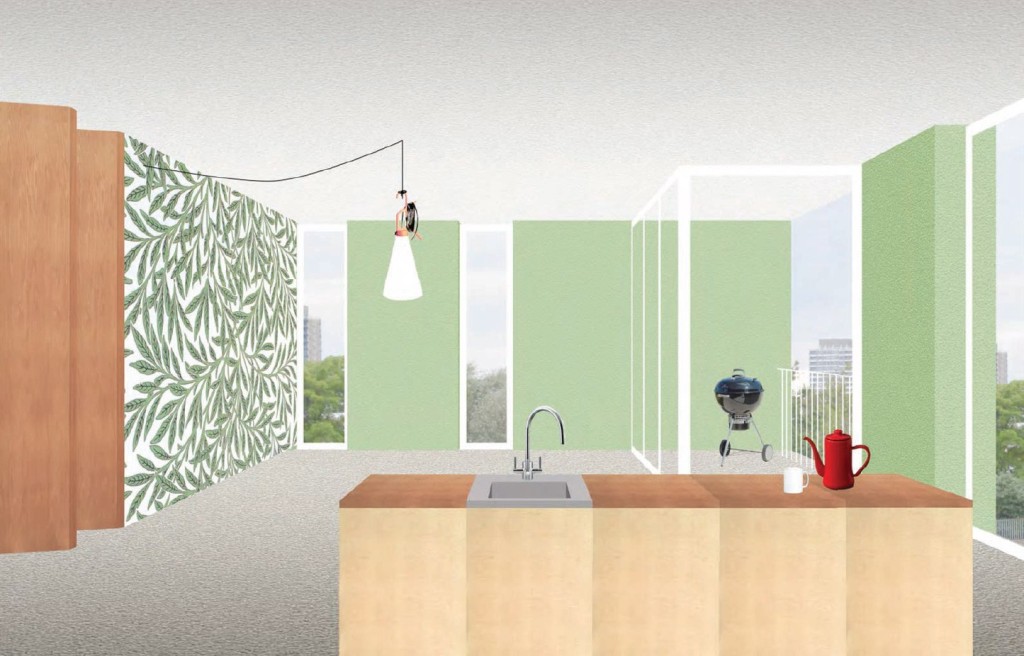 Crisis Point, the title of our project, refers to the existing London high-rise called Centre Point. It is among the first central London modernist office towers, and was established in 1963 for a mere five million pounds, but by 1973 the 32-floor building was already worth 50 million pounds without renting out any offices. After standing empty for eleven years, about 2000 squatters moved in for a short period in 1974, bearing the slogan “Centre Point is the concrete symbol of everything that is rotten in our society.” Economic schemes of the neo-liberalist society may not be morally acceptable to people when they involve homes. “If people hoarded food on the basis that its value was sure to go up when others began to starve and would pay anything, we would stop their hoarding. But hoarding is now happening with shelter in the most unequal and affluent parts of the world.”1

Background to the housing crisis in Great Britain

The accommodation crisis in London is partly due to Margaret Thatcher’s policy of 30 years ago. The campaign called “Right to Buy”, launched in 1979, offered any sitting tenant in council houses a chance to buy their flats, which belonged to the local authorities, at up to 50 per cent off the market value. 2

The subsequent 25 years witnessed the most extensive privatisation process in British history. Today’s opinion is that it was wrong to sell all the council housing that had required such an effort to build after WW II. Initially they were sold to their inhabitants, but after a while ownership ended up in the hands of people who ruled the property market. London boroughs did not spend the money received for selling the flats to build new social housing, and in addition the state support for construction fell by two-thirds. The then government probably hoped that the private market would compensate for the problems through the buying and selling of rental flats. As a result, those who suffered most were the less privileged members of society, pensioners, single parents and others, who now had to compete in the shrivelled market of social housing or at the cheapest end of the rental market. By the late 1980s the construction of new council houses shrank to almost nothing. There is a regulation today that in buildings constructed by private capital, about 20% should be affordable housing. However, according to locals (I mainly discussed this with my colleague architects), these are still too expensive for a person with an average income.

Crisis Point, the high-rise we designed was inspired by examples across the world. At the same time that the afore-mentioned Centre Point was going up in London, the highest building in Porto in Portugal was completed in 1969: Edifício-Torre Miradouro.

The building has mixed usage and belongs to a cooperative of stonemasons. The ground floor and partly the basement accommodate a shop and stonemasons’ workshops. There are flats on six floors, hotel rooms on the next six floors, followed by a restaurant with views all over the town and a radio station on the very top. The Miradouro cooperative is partly financed from the income from the hotel, restaurant and shop rentals, which allows the cooperative members to enjoy better living and working quarters. Someone even mentioned that the profits also provide a little extra for the pensions of the stonemasons’ widows.

A large number, 230, new high-rise buildings are planned for London. As the population increases, the urban structure can only become denser and grow upwards, as the Green Belt established in the 1930s prevents the city from expanding. According to London’s town planning system, higher buildings are possible near the underground stations. The site of our Crisis Point is near the location of the recent Olympic Games; the area is still slightly industrial. For example, the plot accommodates a scaffolding company and its storehouses. As in the case of Porto, we intended to include the industrial function in the programme of our building: a scaffolding company should operate where scaffolding is most needed, i.e in East London, and not out of town.

On the first floor of the new building standing by a noisy motorway we allocated rooms for the scaffolding company; on the other side we planned a café with views of the canal. The uppermost floor has a restaurant with city views and the floors underneath are hotel rooms. Besides rented rooms, the high-rise has a large room for common activities, i.e a library, a joint office or a sports hall, and also a daycare room. The cooperative manages the whole 32-floor building. All functions are on different vertical levels. The flats are not only meant for the inhabitants of the cooperative, as some are sold on the open market in order to earn additional income for the cooperative. The entire business scheme thus stipulates that various functions in the mixed-function 32-floor high-rise provide for one another.

To be sure that the business plan would work, we did a rapid calculation, based on the prices of plots of land, construction and rental.

Comparison is possible with what has happened and is happening in Estonia. As a result of restitution and privatisation, about 90% of Estonian people own their own homes. Fortunately, Estonia does not suffer from a lack of space, although the private market logic can often restrict the actions of local governments, because the public sector does not own much property. For example in new residential districts, the local government must buy land from private owners in order to create supporting structures, such as schools, kindergartens, hospitals, parks, car parks etc. The UK and Estonia have similar problems related to renovating modernist spatial heritage; most of our apartment blocks date from the Soviet era, when energy saving was not properly considered. The British, too, are currently renovating their housing of the 1950s–1980s. It is easier with the buildings belonging to the housing associations, because the housing association owns the whole building or even a large complex of buildings (the inhabitants are tenants) and thus the renovation is much simpler to manage. Bigger problems occur when the flats belong to different owners and problems emerge in reaching agreement to manage the renovation process and finance it, as in Estonia. Luckily, self-organised apartment owners unions in many Estonian apartment buildings have offered solutions to these problems. Unlike London, however, no grass-roots cooperatives for building new apartment blocks have developed here.

East London and the Balfron Tower

When I worked in London, I lived in the famous Balfron Tower, designed by the Hungarian born architect Ernö Goldfinger. This masterpiece of brutalist architecture was completed in 1967. The logistics of the building, vertical movements – such as lifts and garbage shafts – are separated from the main apartment block. The idea of modernism – the streets in the air have been fully realised here. A trip from the lift to your flat is like a walk on a bridge or a street in the air, where you can admire views across the whole of London. Living in this 27-floor building was a marvellous opportunity to lose preconceptions and find inspiration. 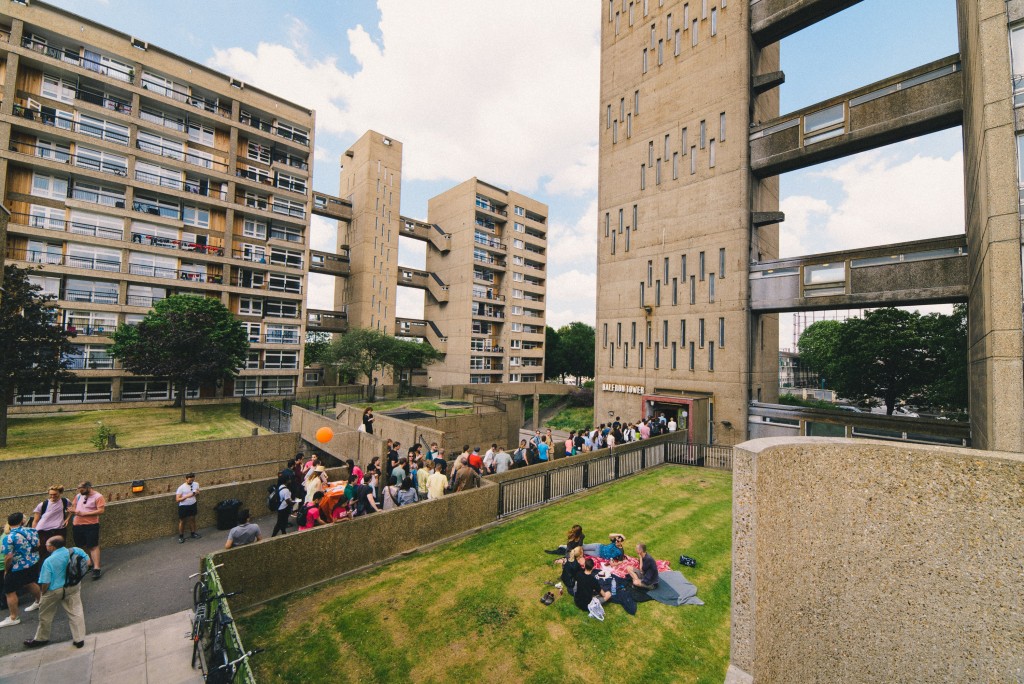 The building used to have a slightly negative reputation: many considered such concrete architecture extremely ugly, while others saw it as an urban district for immigrants. Recently, however, the building has become rather popular, and cultural people have moved in: the young and the successful. The housing association as the owner immediately seized the opportunity and evicted people who had been there for decades from over one hundred rented flats, offered them alternative accommodation elsewhere and planned to renovate the building in order to sell flats to private owners. There is nothing untoward about sorting out a piece of architectural heritage in this way, although the negative side of gentrification involves making property elitist. There are only two buildings like Balfron Tower in London. It is very unlikely that the Soviet concrete residential architecture in Estonia is going to become popular any time soon, as there are just too many similar buildings. Although Kalamaja has been the favourite location of the creative masses for a long time, I am curious when the same young people will start moving to the Soviet masshousing districts or join forces in a form of cooperative to commission new architecture at sensible prices.

1 Danny Dorling. All That is Solid: The Great Housing Disaster. 2014.

Aet Ader (1985), an architect, one of the two editors of Ehituskunst and the vice chairman of the Union of Estonian Architects. Ggraduated from the Estonian Academy of Arts Faculty of Architecture and also studied in Copenhagen. One of the founders of the architecture office b210 (www.b210.ee) based in Tallinn. Recently, she has been part of the design team of Tallinn University of Technology testing tank and laboratories building in Kuressaare and the curatorial team of Tallinn Architecture Biennale 2013: Recycling Socialism. She is involved with the topic of public space via various media and scales – from the booklet Tallinn’s Planning Guide, compiled together with Linnalabor, to urban installations produced in several contexts and by various teams.

Aet Ader (1985), an architect, one of the two editors of Ehituskunst and the vice chairman of the Union of Estonian Architects. Ggraduated from the Estonian Academy of Arts Faculty of Architecture and also studied in Copenhagen. One of the founders of the architecture office b210 (www.b210.ee) based in Tallinn. Recently, she has been part of the design team of Tallinn University of Technology testing tank and laboratories building in Kuressaare and the curatorial team of Tallinn Architecture Biennale 2013: Recycling Socialism. She is involved with the topic of public space via various media and scales – from the booklet Tallinn’s Planning Guide, compiled together with Linnalabor, to urban installations produced in several contexts and by various teams.