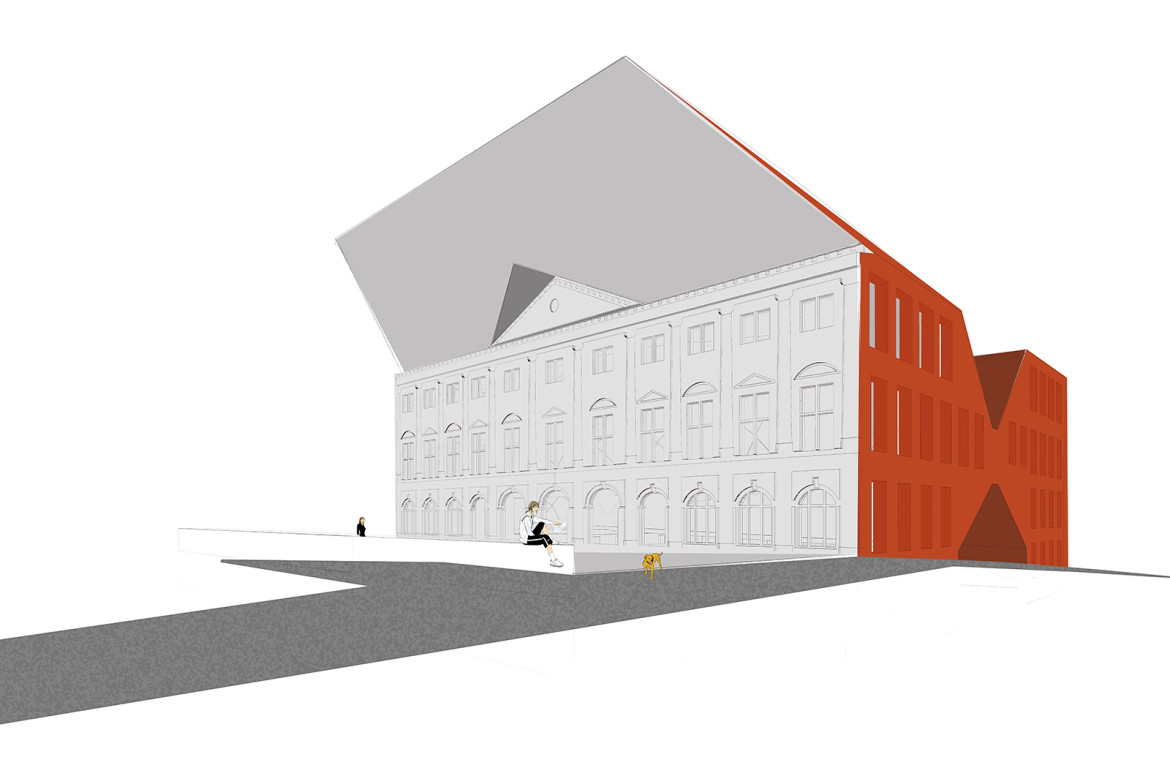 The openness of schools

Two schools. What is it about them that causes talk, publicly and privately, in superlatives? And if they are cursed then in secret and by builders who are always having trouble with such structures. It requires a personal approach. Their standard is being non-standard. Seemingly logical, but hidden connections and unexpected surface solutions demand unfamiliar construction methods. Those who have to calculate the building costs face the biggest challenges, as every non-standard solution has to be thoroughly analysed before a specific sum can be determined.

What do these schools have in common? First of all, openness. Outside and inside. Both face town squares. In Narva, there is the Town Hall square, packed full of historical context and dense significance. BMF (Tallinn University Baltic Film and Media School) has a main campus square, forcefully taken away from a car park. The inner square should become the main square of the entire TLU (Tallinn University). The spatial essence of TLU and, it seems to me, to a large extent the new imago have been hijacked by BMF by means of architecture, which defines it spatially as a square, as openness and a determined centre, big enough for everybody and small enough not to have too many meanings and dissolve people in them. The square of one is 40 x 40 m, and the other is the Town Hall square of 60 x 60 m. Quite enough, when compared with the Town Hall square in Tallinn, which is 65 x 70 m. Narva College has defined the development of the whole Narva Old Town, i.e there is now a key for how to handle hundreds of thousands of square metres of attractive, much debated building bulk in an area that has not seen any construction for decades. Compared to their significance, the number of square metres of both college buildings is very small. Could the cost of 1 sq m be calculated? My brain, when it comes to architecture, is haunted by the question of whether this is good architecture, which acquires a role and meaning, or if it is something else. It adopts the lead role by force and hence also the responsibility, for which some hate it and some adore it. Is it an egoistic actor who has suddenly, in mid-performance, begun to dominate, or has this been shrewdly written into the play? Or perhaps the play has left everything undecided: in the case of Narva, restoring the old or building the new. Maybe the building polarises space, just as politicians polarise important questions for people. In order to exist (the building), and in order to be elected (the politician), sides must be taken, a clear decision must be made. This does not mean that the building itself cannot be an entirety, a microcosm. The questions that are haunting about both buildings: whether the project was mediocre and acquired without competition, whether the Narva Old Town has not been defined, although the location is prominent, and in the case of TLU, whether the square gathering all the buildings is undefined. In Narva, considering the significance of the location, space would also have been defined by a poor-quality plaster box. This would have conveyed the message that here in Narva, and especially in the most important place, in the Old Town, it would be pointless to waste ideas and energy, as everything is lost anyway. Hopeless, безнадежный, hoplöss, although children must have a place where they can make preparations for their journeys into big centres.

Choosing the location for a building is certainly one of the most crucial decisions. It was impossible to do something quietly, in secret, in the Town Hall square without a lot of questions and without demanding, shouting, cursing and arguing. This is, after all, public space and visible to everyone. In BMF’s case, however, this building could have remained a backyard, a place simply providing more rooms needed for the education of people. BFM’s location itself does not brag, demand, quarrel or argue. The meaningless backyard has become a sign, especially when the sloping tribune/car park and green areas are completed as well. What is common for both schools is creating their own identities. Neither could have afforded to have a quiet box round the corner. In Narva College, whether it is present there powerfully or calmly, the role of the school administration is enormous. In fact, there was no need for them to make an extra effort – the lectures, after all, are taking place. For the content and significance to be in unison, the building had to have a clear identity. BMF, on the other hand, had no other option than to get its own building, which is a far cry from their previous location in an anonymous office block in the high-rise residential area. It would be interesting to know whether in 50 years art historians will think that the moment BMF College decided to join forces with Tallinn University instead of the Academy of Arts, the latter started its decline into solitude. You need friends to be noticed; you must exist in space. 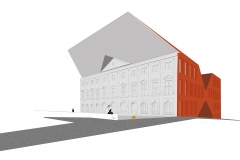 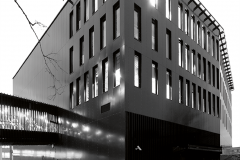 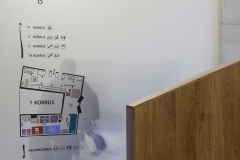 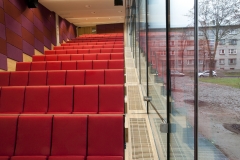 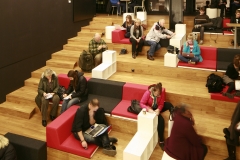 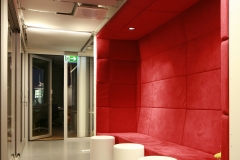 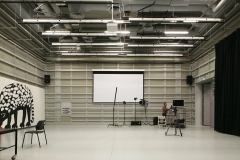 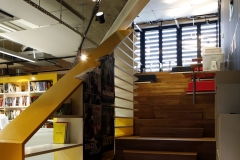 The inner rooms of both schools enable the students to exist without precisely defining what they have to do, a typical feature of the laptop era. You have everything with you, the library is in the computer, your work and your people are always there on the web. The only question is the environment where you sit down together with them. The environment should be rich in species, so you can have the position in the spatial structure that you like. It is interesting that in both schools the lobbies and libraries are quite open, and on different levels. In the course of history, the influence of space in lobbies and libraries has always been important. In these two schools, people take part as well. Especially in the libraries, both relatively small, but endlessly articulated, almost to the point where they resemble the library in Umberto Eco’s The Name of the Rose. When I read the book I could not understand, as an architect, how such a small room could hide so much. It is full of secret passages, concealed doors and opportunities to get lost. Small, but elaborate and dense.  The same goes for the gradation in the lobbies. We can draw parallels between the College lobby and BMF’s 3rd or 4th or 5th floor lounge/open lecture room. People sit on top of one another, like in the trendy bar Bella Sky Bar? OOOOO in Copenhagen, where visitors are seated on steps as on a tribune, without feeling either above or below others. The steps establish no hierarchy, which would have happened in the past; today, being above or below is the same: social equality, and a lack of hierarchies. These rooms are popular, as are niches in corridors. After all, what is a university if not a place where you can show yourself and look at others, and then make contact with the right people, pair up with some and multiply with others. What you study seems less important than what group you belong to, because belonging to a group provides you with direct information, knowledge and contacts, and ensures facebook invitations to events, which in turn shapes your soul, just as “a gym shapes your body”. Today’s university is/is not a place where young people go to listen to lecturers because it is difficult to get information elsewhere. Why go to school to hear a lecture if you can experience the best lectures in the world online, often live, in the field you are interested in and on topics you need at the moment? School is something else than sitting in a lecture room. You need a reference background to check whether your ideas are correct, whether the direction is northeast. A building that supports this should be free, definitely avoiding a hierarchic system. People should be able to be above and below in a free field, inside and outside, beside, round the corner and in the open. Considering this, it seems logical that both schools have skimped on classrooms. Priorities are important: position in town, i.e. the exterior, then the open space where real work takes place, with an occasional peep into lecture rooms, which are not primary. They function as workshops rather than places to listen to lectures. Even the classic classroom with chairs facing the teacher is now laid out in a wider circle so that the teacher is closer to everyone, because thinking is no longer clear and narrow but round and wide. Buildings like that have no specific style, as every room differs. Style is instead determined by the user. The building does not compress or teach; instead, it is a decoration or perhaps a structure in which you can operate.

Both buildings stay open late, and they do not close for dinner. The only 24 h school used to be the Academy of Arts, whereas now the ‘applied art school’ is losing its pre-eminent position. The openness of a school is crucial, seeming to provide extra time, a BA degree plus evenings. It’s like a Sunday or leisure time as well, when you can finally do what you want. Google has liberated people from Friday slavery; on that day, the employees are allowed to do what they please in the office. The fifth working day is for perceiving freedom. Most new Google ideas are reputedly born on such Fridays, when the employees can test their crazy ideas on others.

There is another similarity. Strangely enough, the roof terraces of both colleges face their Old Towns. Is this value in itself, has it come from the property-based world where a view costs a lot of money, or is it something else?

What other common features are there? In both cases, an open architectural competition was organised and in both cases the number of entries was considerable. In Narva 000 and in Tallinn 32. The winner really had to offer something, and ideas had a chance to compete. In both cases, the winners were young ‘old hands’. Kavakava and Salto simply won. No idea why this happened, but hopefully it will become clear when you go visit.

I have forgotten to mention the two staircases of Narva College, conjured into one, and sharp red chaise lounges in the corridors of BMF where you can daydream about fame and many other things, which you must experience yourself. After all, it’s architecture.

How to NOT Narrate Architecture