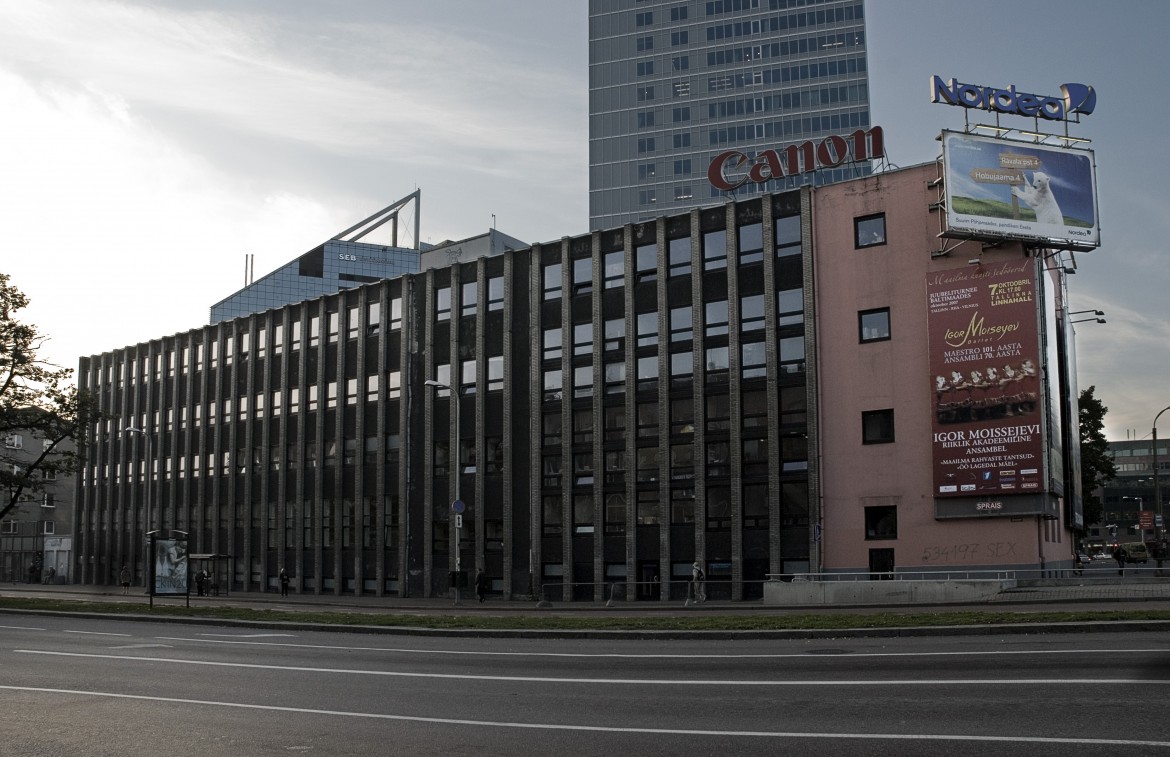 The Estonian Academy of Arts (EAA) was celebrating its one hundredth anniversary in 2014. In recent years, the Academy has attracted wider attention not because it is the most important art educational establishment in the country, but mainly because of the saga of its new building.

EAA’s former plot of land in central Tallinn has now been turned into the most banal form of everyday urban life: a car park. The absence of something significant is palpable. It is perhaps not too excessive to compare this to the void characteristic to the heart of Tallinn for years after WW II. The cultural layer of the plot both in a material and intellectual sense is – or rather was – dense. Thorough archaeological excavations revealed plenty of material information about the history of Tallinn’s neighbourhoods. The art school building managed to stay put on these cultural grounds for nearly one hundred years. 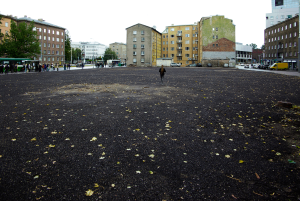 Although the building was repeatedly reconstructed in the course of the 20th century, it nevertheless remained one of the supporting pillars of Estonian art and cultural life.

Today, everything at Tartu Road 1 has vanished. The immovable property? is waiting to be sold, probably becoming some sort of business, another shopping centre or office block. EAA’s ambitious and bold plans to erect a new building with strikingly fresh architecture have failed.

Architectural competitions as a mirror of development in society

EAA’s saga vividly reflects the developments in Estonian society during the last decade. The social whirlwind caused by economic and financial crises generated radical decisions, forced many to change their minds, retreat from their previous decisions and make compromises. 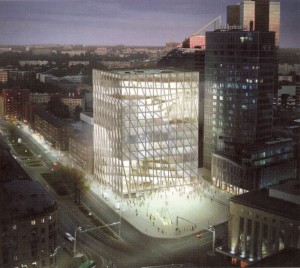 Art Plaza. The winning entry of the 2008 architecture competition of the new building of the Estonian Academy of Arts by the SEA and EFFEKT, Denmark.

During the past six years, there have been two architectural competitions for the new home of EAA. In 2008 a brilliant, extremely modern, but expensive entry was chosen. The cooperation of two Danish companies, SEA and EFFEKT, envisaged a high building with strikingly fresh architecture, plus a public square in front of it. It was an ambitious plan to manifest the presence of new Estonian culture in public space. It would also have been a strong signal to the outside world that Estonian society values and appreciates both its new culture and the continuity of art education.

However, it was decided in 2013 that EEA would forever bid farewell to its historical site and move to the other side of the Old Town, into an old industrial complex at the edge of the Kalamaja district. The recently finished new architectural competition sought to adapt the existing industrial building for educational purposes. Compared with the 2008 competition, this is interference at the micro-level. As money is scarce, changes will be minimal and the opportunities offered by the existing building will be used to the maximum. The winning entry of the KUU architects, completed in cooperation with the philosopher Eik Hermann, reflects the capability and social reality of our country in AD 2014. In 2014 very little has survived of the ambitions of 2008. Society as a whole seems to have realised that we lack the ability, people, competence and financial means for grand gestures and powerful manifestations.

Still, moving to the edge of Kalamaja is not necessarily a bad choice. The Academy will definitely enliven the urban space there and forge links between the Old Town, city centre and the Kalamaja area by attracting more visitors, both locals and tourists. It is crucial for the EAA that after years of operating all over town it can finally gather all departments, lecturers and students into one building. Contacts between specialities and people will be properly restored. Moving everyone in together will not only be practical, but will convey a strong imagological message to society: once again, EAA has a home of its own, one building, one location. 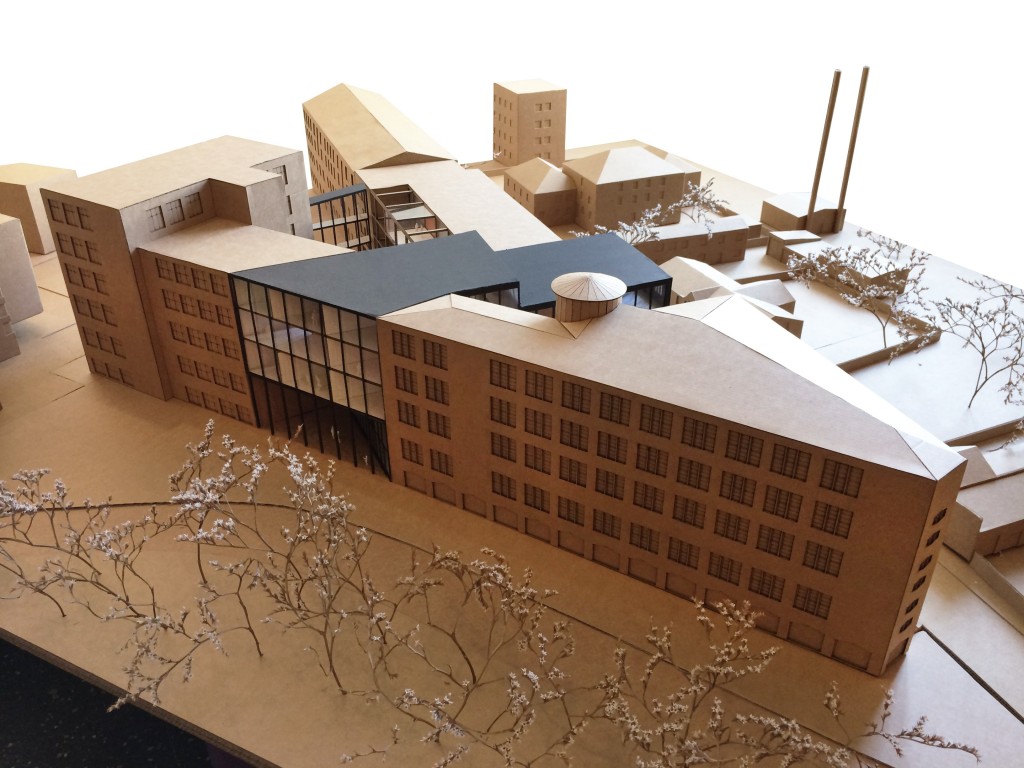 Despite all that, I still cannot shake the feeling that the keyword of the EAA saga is ‘missed opportunity’. How did it happen that the whole physical legacy and a large part of the intellectual layer of culture connected with the historical site on Tartu Road merely disappeared? Attempts have been made to find the guilty party, but with little success. Responsibility lies with politicians and public servants, and certainly with EAA’s own directorate, where internal conflicts lasting for years have hindered making clear, quick and sensible decisions.

However, if we want to point out the biggest culprit, it might well be the entire Estonian public: you and me, us. Why did we fail to protect the continuity of EAA’s activity on its historical site? Why did we not demand better decisions from the politicians and EAA’s directorate? Why did we allow the historical building of the academy to be demolished so easily? Why did we not demand that the then government protect EAA more forcefully? Or maybe we did all that and nobody listened …

Let us not moan and groan too much, however – not all has been lost: EAA still exists as an academy and there is a plan to move into a new building. Several specialities have been thoroughly refreshed and an impressive number of our brightest minds are included among the lecturers. EAA is an increasingly appealing destination for foreign students. It is to be hoped that the academy will get a new, energetic rector; the contest is on as we speak.

I believe that during the coming decades we will see many positive developments at the edge of the Kalamaja area. In 2016, when hopefully EAA will move into its new premises, the saga of the building will be finally and truly over, and EAA can start its second century with a clean slate. Step by step, cautiously.

Carl-Dag Lige (1982) is a critic and historian of architecture, and a curator at the Museum of Estonian Architecture. He focuses on the history of the 20th century and modern architecture. He has been a producer, moderator and co-curator of architectural events. His MA thesis in aesthetics at Helsinki University examined Ove Arup’s philosophy of architecture and design.