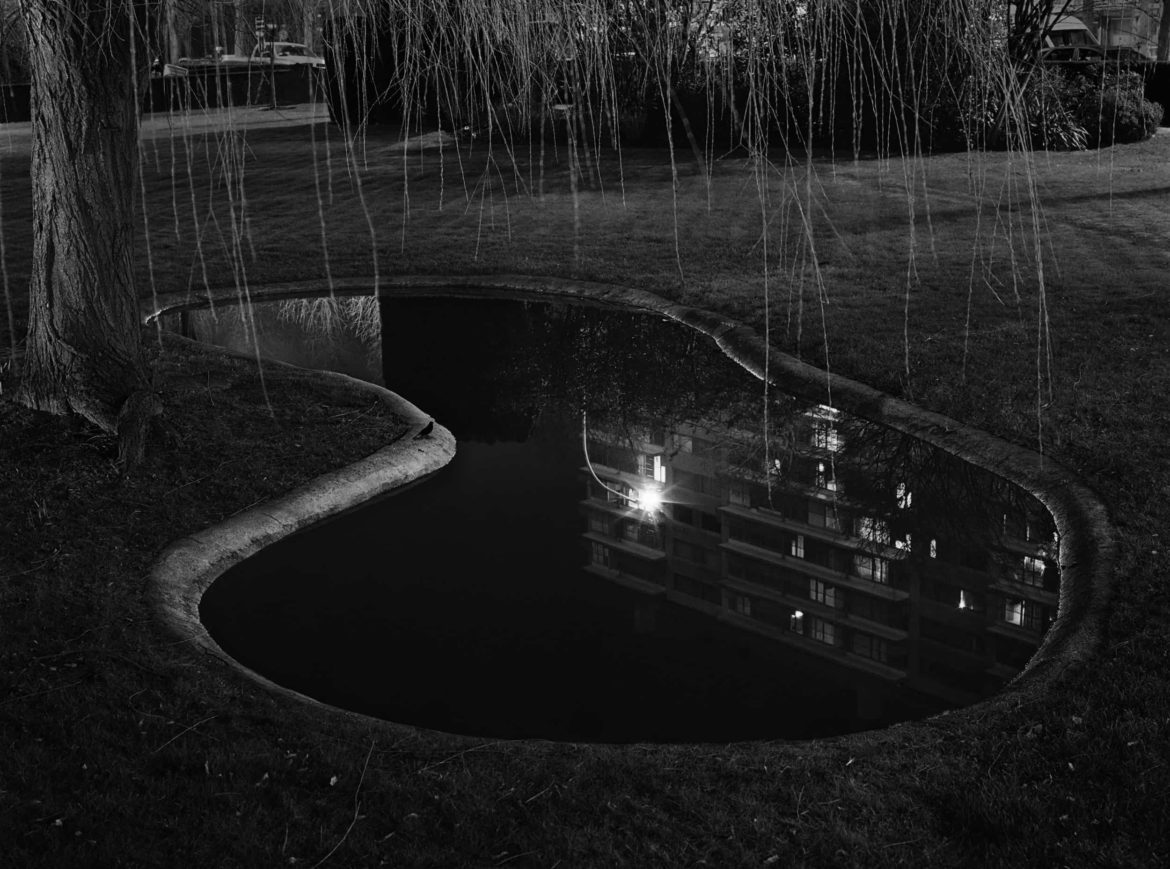 The Impact of Productive Frustration

The central thesis of Jacques Rancière’s philosophy of art is that art introduces changes in the partition of the sensible¹. This doesn’t mean that art’s primary function is to think, say, express or do something (although it does that too). Rather, it means that art transforms and renews the (existing) ways it is possible to perceive, think, say, express or do something in the first place. While doing this, art also transforms subjectivity: it creates new subjectivities.

In a specific way, this is also the effect exerted by Paul Kuimet’s recent oeuvre, an oeuvre that is quite easy to describe but quite difficult to address meaningfully. This difficulty can initially be characterised through the following question: how is it possible to meaningfully address something whose impact wholly precedes meaning?

In Kuimet’s recent works, one can detect a few clear-cut formal and thematic tendencies. Starting with “Horizon” (2013), his main form of artistic expression has been spatial installation, the central components of which are either (1) a darkened room with two lightboxes that photographically depict an object from two points of view, thereby creating a shift in sensory (but not so much in ‘meaningful’) perception (spatial manipulations), or (2) a 16 mm film projection that utilises inventive techniques to ‘animate’ otherwise static objects (temporal manipulations). The range of depicted objects is likewise quite narrow and clear-cut: sculptures or sculptural objects, buildings or architectural objects.

If one is looking for injections of (social) criticism in Kuimet’s works, it is probably best to study the choice of these thematic motifs: on the one hand, the cultural and historical connotations of the buildings depicted in the lightboxes – the Atomium, built for the 1958 Brussels World’s Fair “Perspective Study” (2016); the Palazzo della Civiltà Italiana, a prime example of Fascist architecture “Figure-Ground Study” (2016); and the now demolished building of the Estonian Ministry of Finance, which connotes neoliberal market policies “Grid Study” (2016) – and on the other hand, the sculptural objects that the films focus on: Edgar Viies’ Möbius strip-like sculpture, which suggests the utopian potential of modernist technological progress “2060” (2014), and the constructed object, based on an encountered sundial, which resembles an alien cosmic orb of artificial origin “Exposure” (2016).

But I will argue here that despite the rather distinct choice of these objects, and the possible joint critical narrative they might make up, these thematic motifs, along with whatever content or social meaning they might connote, are altogether secondary in Kuimet’s more recent works. In any case, it is very difficult to recognise them as something ‘meaningful’, since the buildings in the photographs are fragmented and the sculptures are almost non-figurative and extremely mute. What is of much greater significance are the ways in which these objects are presented in the overall construction of space, and the purely perceptual impact they exert on the viewer. We can be quite sure that Kuimet’s installations realise the work of pure form: responding to a specific impulse, they transform the familiar ways in which bodily perception is used to confront the surrounding material reality. If I had to name and specify that impulse, I would call it a productive frustration with photography’s traditional (and therefore seemingly inevitable) features: its two-dimensional and static nature, and its predominantly singular perspective.

Kuimet’s work attempts to overcome these seemingly inevitable features in various ways that challenge well-known oppositions related to the visual arts in general. The two photos in the lightboxes of “Le Lys” (2014) depict a sculpture that in the first photo is presented to the viewer sideways, thereby suggesting the possibility of meeting it face-to-face in the second one; however, this is disrupted by the second photo, where the sculpture has turned its back on the viewer. During the movement from one lightbox to the other, the photograph becomes an almost three-dimensional object, a kind of ‘light-sculpture in two parts’, which is in turn thematically mirrored by the depicted sculpture itself. The two lightboxes in “Late Afternoon” (2016) create a kind of parallax between foreground and background, between the abstract and the figurative: that presents itself as a hazy aphasia of colours and lines in the first photo turns out to be an office-space photographed through a window in the sharper focus of the second one. Once again, it is the movement of the viewer in the installation space that creates this perceptual parallax.

“Still Life” (2016) uses cross dissolves to create a play of light that animates a series of photographed stills, thereby dissolving the static nature of photography into the movement of the film material itself. “Perspective Study” (2016) breaks up the linear perspective through several reflected compositions that are glimpses from different vantage points in the centre of the photographs. In “Grid Study” (2016), the black grid in the installation space, the geometrical scaffolding in front of the depicted buildings in the photos and the collages in the centre of the photos together pose a challenge to the familiar notion of the frame of the work of art: as the viewer approaches the depicted buildings, it becomes clear that frames can be found both inside and outside the work of art and not necessarily around the work of art.

Objects in “2060” (2014) and “Exposure” (2016) are filmed in minimalist, hygienic monochrome. The seemingly autonomous movement of light in these works, together with their measured technical realisation, leave the impression that these objects, although evidently artificial, have a cosmic or science fictional quality, and have sprung into existence without the intervention of a human hand. These installations manage to subtract all human qualities from the exhibition space, as well as, in a sense, the (human) viewer himself who happens to witness the artificial immanence of these objects. The viewer’s perception merges with the ‘scene’ created by the depicted objects and their form of depiction, and hence the productive cognitive dissonance these works generate: it is as if witnessing these objects is both impossible and real. In addition, “2060” creates a cognitive contrast between the static object in the foreground and the moving space in the background; “Exposure” creates a contrast between the figurative quality of the object in the establishing shot and the abstract quality of the material’s texture in close-up.

All of these observations are, in essence, insufficient descriptions of completely perceptual effects. Words fundamentally fail to meaningfully address Kuimet’s works for one very specific reason: words, meaning and ultimately ‘language’ itself are completely secondary and utterly late with regard to such art. The transformative impact of these works primarily exerts itself on the level of affect: in the purely bodily and perceptual experience of the recipient. This kind of experience fully takes place long before the ‘meaningful’ intervention of any language: it is first and foremost an experience that precedes all meaning and therefore, in a sense, all subjectivity. Following Fredric Jameson², we may also say that these works primarily realise their transformative and enriching potential on the affective level of bodily consciousness. Jameson differentiates mere bodily consciousness from subjectivity, which is, for him, a purely lingual and meaningful phenomenon and, as such, only an object for this consciousness. Following this division, Jameson also rephrases the notion of ‘emotion’: he re-names conventional emotion that belongs to the sphere of subjectivity ‘named emotion’ (delight, sadness etc.), and differentiates it from affect, which is a purely pre-subjective and bodily phenomenon that is felt on the level of ‘mere’ consciousness and cannot be accessed through language.

In Rancière’s terms, it is safe to say that Kuimet’s work precisely redistributes the sensible on this affective level of pure consciousness. It does not convey any clear-cut (cultural, critical or whatever) meaning to us and is not associated with any clear cut ‘meaningful’ emotions; instead, it transforms our bodily potential for perception on a much more immediate and primary level, that of the impersonal present of the body, in regards to which subjective ‘meaning’ is completely secondary. Therefore, I’ll venture to claim that the impact of these works is not based on whatever ‘meaning’ they might convey, but on their simple spatial and material presence.

Jaak Tomberg (b. 1980) is a literary scholar and critic based in Tartu, Estonia. His main fields of research are literary theory and science fiction.

Jaak Tomberg (b. 1980) is a literary scholar and critic based in Tartu, Estonia. His main fields of research are literary theory and science fiction.