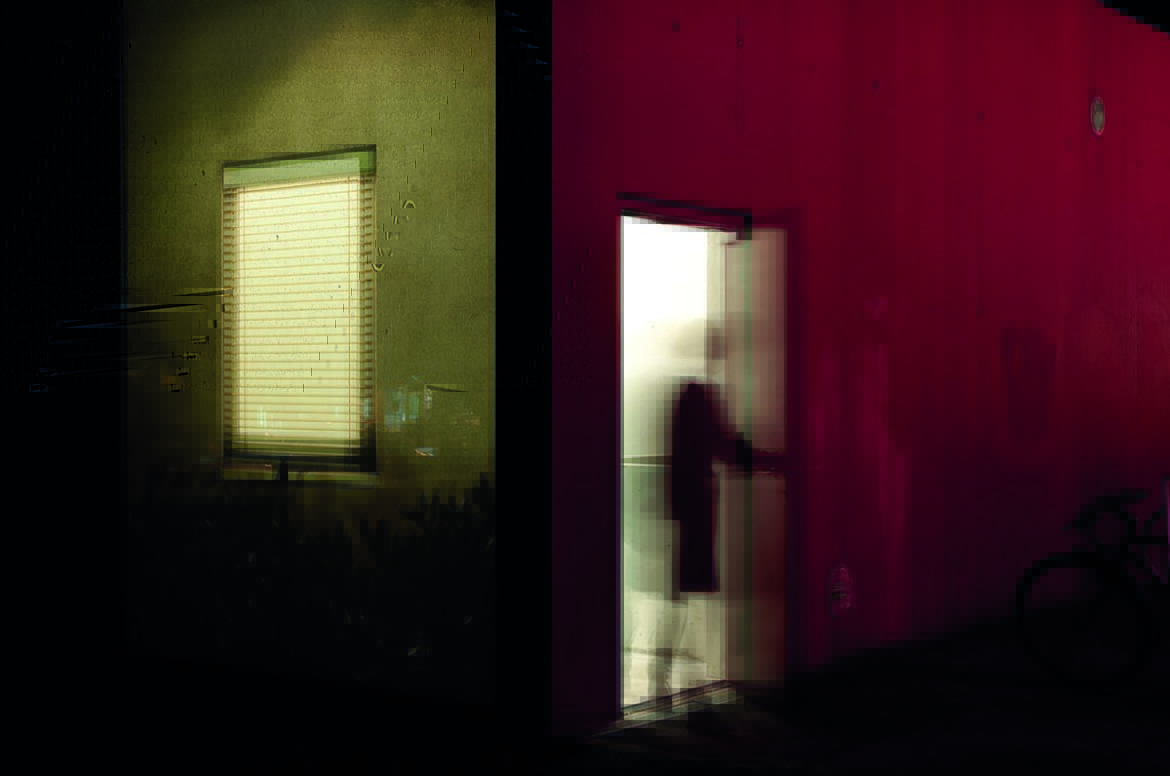 Paul Kuimet is one of the new names in Estonian photography. His work has stood out in recent years for its critical and sensitive treatment of topical themes. The young photographer recently received his BA from the Photography Department of the Estonian Academy of Arts. In addition to the Academy, he has studied in London and Helsinki, and also studied film and video at the Baltic Film and Media School for one year. He has participated in at least eight group exhibitions and one personal exhibition at the Hobusepea Gallery in 2010. Kuimet’s latest exhibition can be seen, outside Estonia, in Austria.

Kuimet, still a student, is naturally greatly influenced by the Academy. The peculiarity of the Academy of Arts’ Photography Department, compared with other local institutions with similar aims, is that it tries to prepare artists to feel at ease in the entire field of international contemporary art. 1 The emphasis is on a camera-based approach, but includes other aspects. The broad approach naturally poses the threat of becoming too vague. However, a chance to enter the art world early on certainly encourages students to actively seek their own themes and handwriting. Exciting artists thus catch the public eye and get their first solo exhibitions even before they graduate. This has certainly been true of Paul Kuimet. Photos of houses, architectural details and landscapes on the outskirts of a city – the man-made urban environment seems to be the theme Paul Kuimet records. However, despite his cool documentary manner of depiction, he is by no means a traditional architectural photographer. 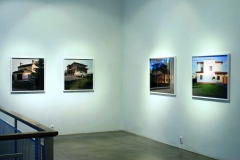 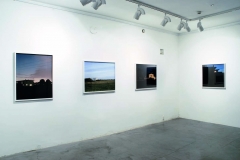 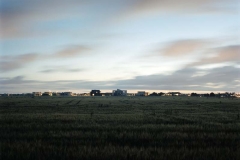 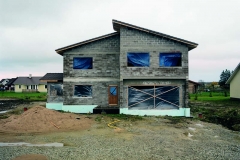 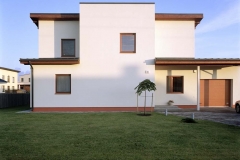 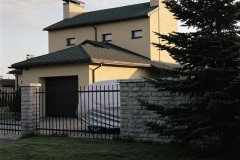 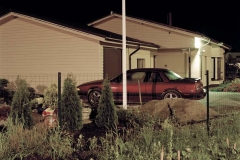 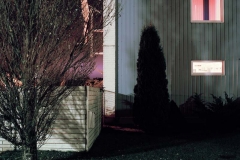 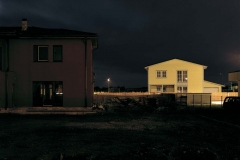 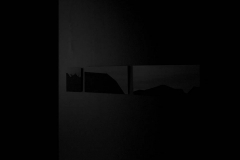 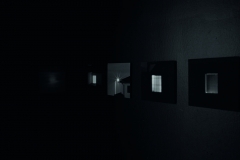 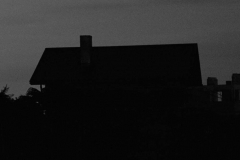 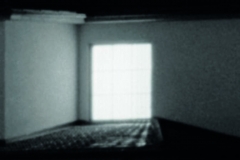 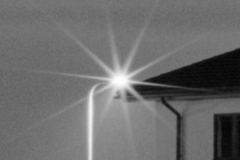 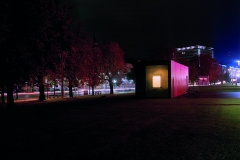 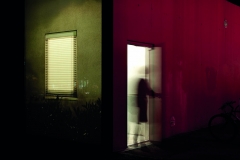 His approach is based on research, i.e the lens is pointed towards the physical environment, but his keen eye sees beyond it. We see the space for living, but we do not see life. Kuimet is right in thinking that having no people in his pictures emphasises the traces of their activities in the environment. Paul Kuimet’s first personal exhibition, In Vicinity, took place at the Hobusepea Gallery in Tallinn in 2010. It consisted of a series of photographs and two videos, and tackled the topics of (sub)urbanism and social space from his personal viewpoint. He recorded the area where he grew up near Tallinn, showing how it gradually mutated into yet another prairie on the outskirts. It is a melancholic illustration of the process which Estonian society experienced in the boom years of the early 21st century. Fresh plaster, new cars and a perfect tiny patch of lawn, with hay, thistles, brushwood, and heaps of building rubbish on the other side of the garden fence. Man’s presence is only evident in the bluish glow of a television (although the ear recalls the distant purr of a lawn-mower and the dull creaking of a trampoline).

A rising standard of living and favourable bank loans fulfilled the dream of many Estonians of escaping high-rise or slum areas and settling in small houses just outside the town amidst nature. An extremely liberal planning policy resulted in huge numbers of real estate villages spilling unchecked beyond the city borders. Unfortunately, these houses cannot offer any of the values the new inhabitants were looking for: privacy, security, originality or beautiful nature. Alienation from people’s more extensive living space – the neighbourhood – is further intensified by the Soviet legacy, i.e new inhabitants coming from urban apartment blocks identify only with their immediate living space, and ignore everything beyond it. Work and social communication occur in town and entertainment centres, so there is no motivation to create any public space in the vicinity of their homes.

An easy parallel emerges with the massive building activities on the outskirts of American cities in the 1970s and the dismal results of this process, reflected by landscape and urban photographers.2 The ‘new-topographic movement’ 3 united the fields of photography and art, a cool documentary style and a social- psychological message, and elevated the banal and mundane to an aesthetically acceptable state.
The Estonian photographer Paul Kuimet follows the same tradition: his critical social- political commentary on the destruction of his childhood places has been captured in an aesthetic, occasionally even picturesque form, which sharply emphasises the dysfunctional essence of the recorded environment and the ghostly, almost irrational atmosphere. In several subsequent projects, Paul Kuimet developed the topics begun in In Vicinity, although the manner of depiction is more ascetic and the content more concentrated. Relative Luminosity is a space-empirical installation which plays with the viewer’s sense of sight.

Most memorable from In Vicinity are perhaps the shots taken in early evening: the sky is still light, the clouds are dramatic, and the space between the houses is already vanish- ing into shadows. In vain, you try to see into rooms, behind the facades, where the inhabit- ants have withdrawn into their lives, passions and personalities. In Relative Luminosity, the viewer enters almost total darkness. When the eyes slowly adjust, dark and light details gradually emerge, which together form one view of a fragmented house on the outskirts. The artist’s aim was to produce a direct experience which would make viewers aware of their unconscious wish to peep into lit windows, to participate in other people’s lives. This wish is more intense in anonymous new urban districts, where neighbours do not know one another and where the fragmented photographic image clearly belongs. Who knows what kind of world will be revealed in that mute introvert box of a house?

In 2010 Paul Kuimet displayed two projects in Linz, Austria, within the framework of the EU project Urban Installations. Both tackle the relationship between personal and public space in the urban context. The place-specific installation Untitled (246×343), in the vicinity of the Lentos Art Museum, uses the entrance building of the underground car park as a light box. The photographic transparent, a window covered with Venetian blinds, is lit by lights inside the building, thus producing a new, partially illusory architectural element. This work relies on instincts similar to those of a photographic project in the darkroom: seeing the lit window, the human brain projects an imaginary room behind it, which only exists in the mind. The lit window exudes mystery and an urge immediately emerges to peep in and solve the mystery – to adapt the imaginary room to the real one.

The exhibition Not Necessarily So was compiled by Kuimet together with another Estonian photographer, Laura Toots. The central concept is unheimlich, a German word meaning ‘uncanny’, ‘eerie’, literally ‘non-homey’. The home videos of Toots’s and Kuimet’s photo-wallpaper depict the inner and outer form of expression of ‘home’, but from a strangely shifted perspective, producing in viewers certain perceptual disorders and a feeling that they are seeing something that is usually hidden from the eye. This phenomenon, in fact, constitutes the main charm of Paul Kuimet’s photographs. They show the surrounding world, the mundane everyday environment, from a slightly different angle, in a new light, and thus patterns may emerge which would otherwise remain concealed behind the veil of familiarity. Becoming aware of one’s surroundings, however, is a huge step towards improving it.

1 The work and aims of today’s Photography Department are directed by Marco Laimre, an artist-professor with anarchist views.

2 Associations with the phenomenon are also referred to in Liina Siib’s article about Kuimet’s personal exhibition: Liina Siib, In Vicinity, or this is what we bought, Kunst.ee 2010/1–2

3 New-topographic photography got its name from the 1975 exhibition New Topographics: Photographs of a Man- Altered Landscape (curator William Jenkins) in New York, which is regarded as one of the most influential exhibitions of photography in the last quarter of the 20th century.

The Impact of Productive Frustration