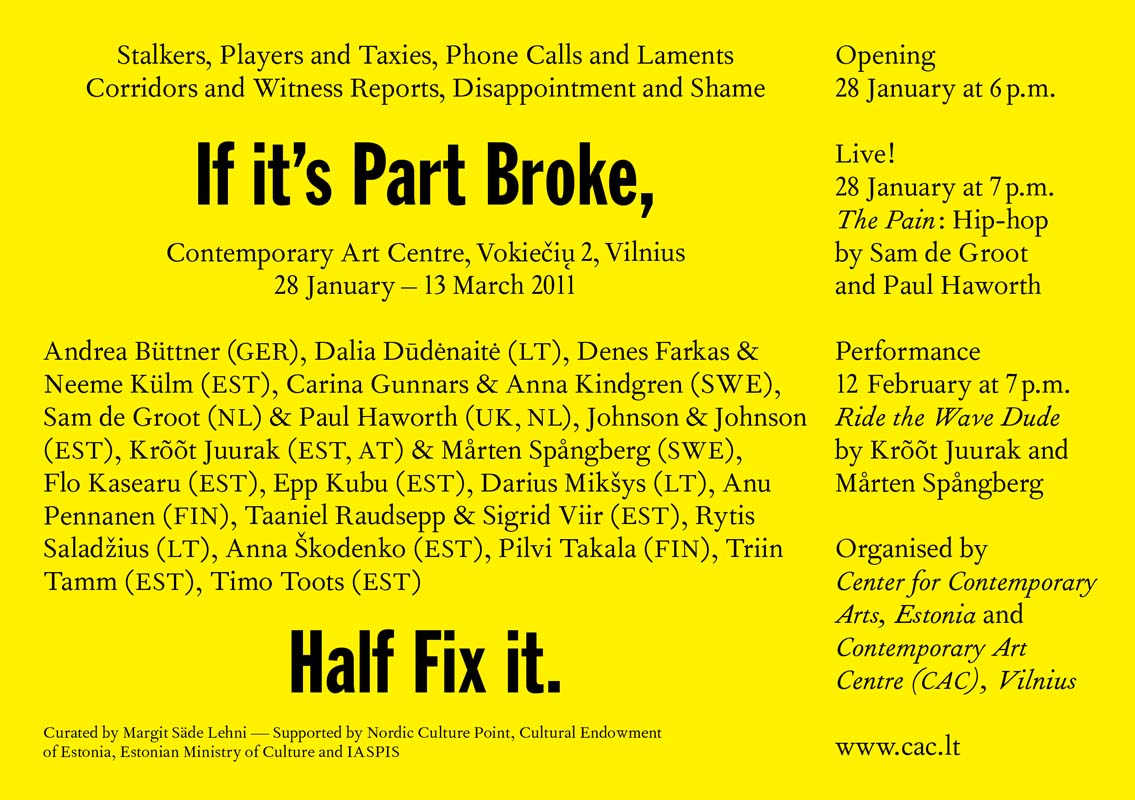 When I think back, the exhibition felt quite similar to the Contemporary Art Centre’s usual buzz. Several overlapping sound- tracks, uncovered equipment, black lettering, a few pale rectangles of unpainted wood, moderate traces of handicrafts and a few splashes of colour on a slightly worn modernist backdrop, finished in white wall paint and a light shade of epoxy for the floor. A list of artists, a booklet and an opening. A former Exhibition Palace with a couple of routes for visitors showing a few distinct takes on the world: two exhibitions on view at a time. 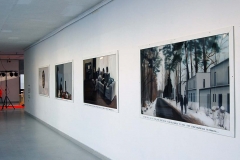 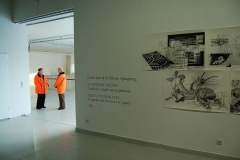 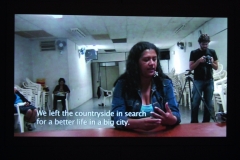 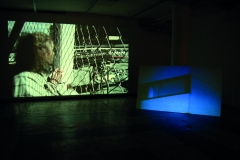 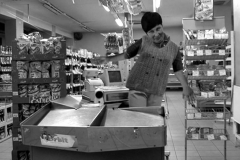 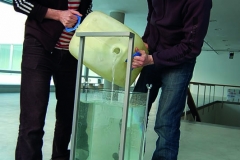 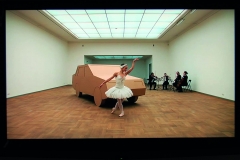 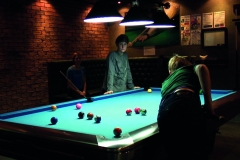 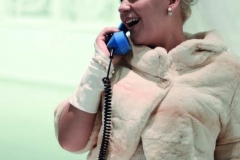 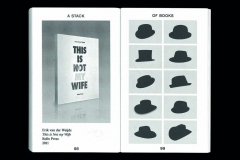 In the very centre of the room usually referred to as the North Hall, there was a telephone, a classic model from the Soviet times in blue plastic. Devoid of a dial, it was clearly meant only for incoming calls, if any. Once in a while, the telephone would ring. Arranged along the walls around it there was a group of other exhibits: very convenient if answering the call did not feel right. A flat screen ceaselessly poured out an adolescent voice and visuals that invoked some online virtual world, such as Second Life, or graveyard-slot overnight TV. On its right, there was a dark doorway that you could slip through to watch a cartoon mini-drama on a projection screen; it featured paper characters that were trapped in a permanent lazy hour of a grocery shop and thus failed to make a living. Apart from the soundtracks, the exhibits did not intrude on each other, so the visitors too could easily share the room without interfering. Someone with his/her back to you examined a small constellation of (photo)graphic images and texts that echoed the rap rhymes from the opening night, and that person was seemingly hesitant to lean down and pick up one of the posters off the floor. Someone was actually stealing a book from the stack behind the corner. You might as well answer the phone. Anu Vahtra’s letter that was printed inside of the cover of the exhibition booklet – a note of the artist’s declining an invitation to participate – spelled out what the whole exhibition seemed to be fuelled with: some deep doubts regarding the necessity of all this. In her introductory text, the curator, Margit Säde Lehni, described the exhibition’s primary aim as “looking into different ways of and reasons for disappointments and shame,” followed by an equally eager scrutiny of “speculation and chance,” and compared her exhibition- making method to a dice game (nowhere does it say that it needs to correspond with the visitors’ methods of unmaking the exhibition). Without clearing the passages between those sets of ideas, she chose to tie the whole project to the concept of something remaining in (or being paused at) an unpopular state of ‘functioning half-way’.

The themes of abandonment and distancing prevailed in most artworks, by way of irony, the dissolution of common beliefs, a focus on boredom or uselessness, the alienated market economy (Johnson & Johnson, among others) and estranged art techniques (as in the works of Krõõt Juurak and Mårten Spångberg) and surveillance, a technology of seeing through walls. To be more precise regarding their attempts: the document files in the installation Corridor by Taaniel Raudsepp and Sigrid Viir were filled with reports from different authorities stating reasons for not being able to provide the footage from their security cameras, most often citing their absence. The works often touched on the topic of the ultimate escape: utopia.

Utopia was referred to explicitly or latently on various levels; even if the visitor was never informed of the exhibition’s working title, Grey New Paradise, it was written all over the urban Brazil in Carina Gunnars’ and Anna Kindgren’s Coordinator, the myth of a mighty homeland in Denes Farkas’ and Neeme Külm’s Vytautas Didysis – Witold the Great, the narrative of Anna Škodenko’s series of paintings, and in the half-mentioned idea of a socially engaged exhibition in general. One way to try following the narrative of the exhibition was by following its characters, as if the exhibition had been put together like a Greek myth. At first glance, the most prominent roles seemed to be played by females. That is, assuming that couples and androids are genderless: the faces multi- plied in the works of Anna Škodenko and Pilvi Takala don’t count. (The gender of actual art- ists has very little to do with this.) One was the blind protagonist of Anu Pennanen’s film A Monument for the Invisible. Watching a film that translates the experience of a blind person can be… unnerving. Blind fencing, an episode of which is shown in the film, can only be fair if both fencers are equally deprived of sight; however, the exhibition’s insistence on ‘half- ness’ and speculation, and especially the video projector’s beam suggested a game involving privileges. Another was a coordinator of housing projects for the homeless in Brazil (in Coordinator), who had worked towards providing other families with what she had just achieved on her own. A third was a ballerina spinning around a cardboard model of an automobile in Johnson & Johnson’s Layers of Commodity, a personification of machine-like grace. And finally, most disturbing of them all in her persistence, there was a wicked clown in the darkest end of an alley – a woman who cried ceaselessly (Weeping and Moaning by Epp Kubu). But the exhibition seemed to suggest that, contrary to the prevailing logic of success, following one line would not lead any- where, and turning half-way through might prove to be more productive – in some paradoxical way, reminiscent of Andrej Tarkovski’s Stalker, a movie that could very well have been part of the show. The chart of different hats, including Rene Magritte’s signature one, printed in Triin Tamm’s A Book of Stacks and dedicated to The Man Who Mistook His Wife for a Hat, could perhaps best illustrate such a half-way detour from the gender-informed reading of the exhibition suggested above. The Stalkers of the exhibition were re-occur- ring, quirky, often stylish, narcissistic gestures, emerging with a pinch of history and a twist, like the above-mentioned A Book of Stacks by Triin Tamm, displayed as part of her installation A Stack of Books, the oversized exhibition labels, the hobbyist taxi driver Rytis Saladžius (a professional actor’s first appearance in contemporary art) or the text-performance by Darius Mikšys, Where is Your Piece (Dude)?. Mikšys was present at the exhibition opening and, in private conversations, introduced his piece as a ritualised answer to one of the most common questions at such events. In fact, his intention was to reconsider a list of participating artists as a medium with a potential for autonomy, as one could learn from the exhibition booklet, although the actual artists’ list of the exhibition remained fairly true to the customary format. Or yet another peculiar appearance: the bagels served at the exhibition opening by a group of writers who had never intended to work at a stove, but ended up settling for that job in search of a light-hearted way to deal with the legacy of Vilnius’ Jewish community.

At best, the exhibition seemed to suggest that stopping half-way to somewhere might let you emerge in a place you never expected to be. It might well be seen as a commentary on the managerial rhetoric of the funding schemes for projects, including this exhibition: the over-defined notions of goals, continuity, audience and others. And as an exercise in exhibition making, and unmaking, it begged to be compared with walking through a maze in an open field: a luxurious amusement in a field so prone to dead-ends as is the field of art (a statuette of Vytautas the Great in a container filled with water from the Black Sea – really?).

If It’s Part Broke, Half Fix It at the Contemporary Art Centre in Vilnius, 28 January until 13 March 2011. Curated by

Virginija Januskeviciute (1979), is a curator at the Contemporary Art Centre, Vilnius, and one of the founding editors of The Baltic Notebooks of Anthony Blunt (www.blunt.cc).