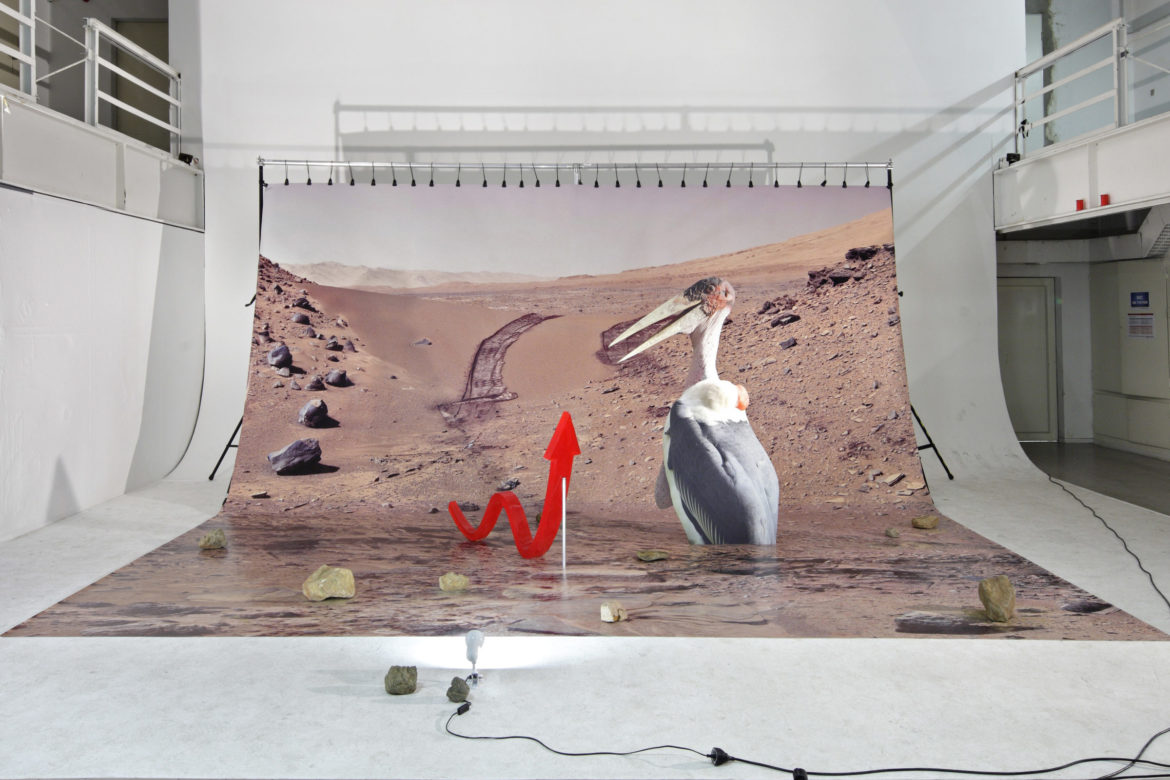 Post-Internet and Its Animals

During the current decade, the Estonian pavilion at the Venice Biennial has presented projects dealing with post-Soviet, feminist and queer topics, or has focused on pure aesthetic form while looking back at modernist architecture. This year’s project sits in a fairly recent layer of cultural history and does not trace its roots back to the modernist era, nor is it based on former political rule. Similar to her previous works, Katja Novitskova’s project If Only You Could See What I’ve Seen with Your Eyes for the 57th Venice Biennial focuses on contemporary culture. Katja has gained international recognition recently in Europe, particularly in Amsterdam and Berlin, as well as in Estonia. The historical significance of her work should be considered when thinking of her as a post-internet artist, as the term post-internet art is built upon prior ‘post’ movements in art history such as postmodernism.

The post-internet movement, which is characterised by a reaction to or extension of the internet, uses the internet not only as a platform or tool but also as a material to produce art. Net art blasted off in the 1990s as a way of making art that has no physical form and that uses the internet as a medium and final environment. As the dematerialisation of art went hand in hand with the ardour of technological developments, net art culminated as fast as it emerged. In the new millennium, the internet has become a commodity, something that is part of everyday life and, while more people have easier access to it, it retains its original technophilic charm. The initial collapse of the physical form and space created in the art world at the beginning of the digital era started to make a comeback as early as the 00s. After that, the field was heterogeneous for about a decade before one could identify a more concrete movement and name it.

‘Post-internet’, as defined by such artists and art writers as Marisa Olson, Gene McHugh and Artie Vierkant, is an artistic style that does not bypass the internet but rather is an expansion of it, reflecting the changes that have taken place in the web environment. While net art is an online platform, post-internet art focuses on the visual experience one gets while online surfing. At the same time, bringing this art into a material form and to a physical space made it more attractive to galleries, art collectors and visitors who were used to a more traditional medium as consumers. For artists it was a new way to explore and translate contemporary culture, while for the art market (as well for artists themselves) it was a sublimation of the internet experience to a more appropriate form. 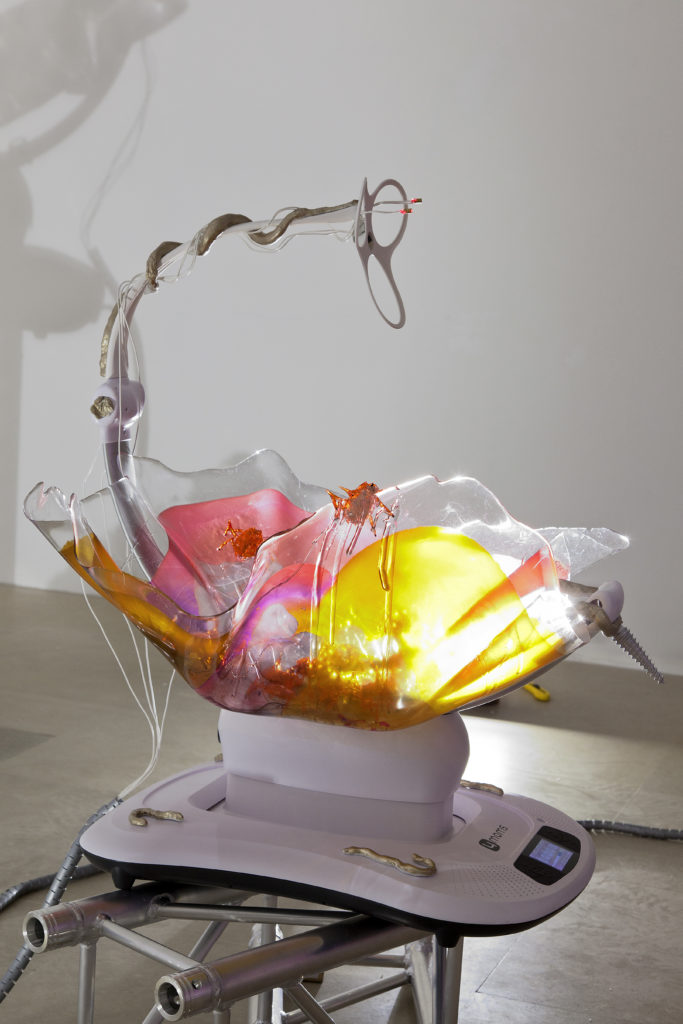 Katja Novitskova looks at contemporary culture through a wide range of essential topics, such as nature and science. Her work can be described as a collection of fractures that seemingly have no relation to each other: something inherent in everything one can find online, yet it all adds up to one meaning that can be described as contemporary life. Novitskova’s first art project, the Post Internet Survival Guide, made her well known as a post-internet artist and the project is still widely referred to when talking about her work. The multi-platform project, which has been a virtually ongoing, was first launched in 2010 as a publication. The ostensibly disconnected images and information gathered from the internet analyse the human condition in a world of advancing technology. The imagery used in the book consists of not only photography but screenshots as well, resulting in somewhat collage-like rendering. These fragments of art, science and news are like threads of various narratives. The (mis)matched collages predict the future and technology as part of ecology and geology.

The Survival Guide can be seen as a depot of the visually and intellectually stimulating material Novitskova is interested in. Bits and pieces of the book can be found in succeeding projects as topics she has targeted for closer study. The following projects have looked even more into ecology as a bioscience by using animals to explore the complexity of living beings and their status as image-based entities.
Photographs of living creatures are repetitively used in her work as the internet overflows with visual representations of animals. Photographs online, just like animals in the wild, struggle to survive and dominate. In terms of this hierarchical battle, internet users act as a higher power, a kind of force of nature that determines which images go viral and which don’t. Unlike the laws of nature, the internet has an inverted logic, in which strong intimidating animals are at a disadvantage compared to cute or aesthetically pleasing species. The logic of attraction on the internet and the attention given to adorable animals fuel this process. Novitskova finds her subjects by browsing through numerous images. The animal photographs she chooses from the internet are printed on huge aluminium plates and presented in a gallery space. While there is a strong element of physicality and materialism in her practice, her way of thinking is not material-based but focuses on the image. The lifespan of an image is important in a world full of visual attractions. Katja Novitskova’s projects of animal sculptures expand the life expectancy of the chosen images by creating a cycle. The artist finds photos on the internet, she makes large sculptures of them, the pieces are exhibited in a gallery where visitors take photographs with or of the art work and the photographic material eventually ends up on the internet again.

The loop created, where sculptures of images become images of sculptures not only addresses contemporary culture but also refers to the much discussed problem of the original in the age of reproduction. A photograph of a bird or animal gains a new meaning on the internet, as well as in the gallery space as a sculpture and eventually as a photograph of the sculpture again on the internet. The loop functions as a continuum of subject matter where the image ending up on the internet is something that has gone through a transformation without losing its similarity to the initial image. Through a circular structure, some sort of identity is established but it’s hard to decipher it completely according to one conception, leaving room for interpretations. The two-dimensional sculptures, zigzags and fluctuating arrows which are frequent symbols in her work are visually appealing. The law of attraction that initially makes a photograph stand out from other images still functions when the image becomes a sculpture. The realistic representation of subjects and usage of widespread symbols achieve recognition. It could reasonably be stated that Katja Novitskova’s creation is above all associated with animals, as these pieces contain familiar animals in a new setting. The sculptures are preternatural in a sort of gratifying way, making them memorable and hyping the animals in the sculptures.

Novitskova’s latest projects have looked more deeply into the artificial and its correspondence to nature. Curiosity about future technologies are revealed in odd artificial machines. Through these robotic installations, a search for a common denominator between biology and the synthetic is revealed. The 2014 project A DAY IN A LIFE with THINGS I REGRET BUYING includes kinetic sculptures that explore the borderline between the mechanical and natural, as the pieces made from electronic baby swings, polymers, rubber, metal and other materials resemble simple living organisms. The same kind of creatures can be seen in the 2015 project PATTERN OF ACTIVATION (planetary bonds). While the 2014 project still points to life on earth, with motorized caterpillars and artificial plants, the 2015 project relates to an environment outside of Earth, with sculptures of a comet’s surface, citing the mission of NASA’s space probe Rosetta. The polymers added to the white and light grey electronic swings are painted in bright colours and promote an HD image resolution-like experience. At the same time, the level of detail of the pieces with fish bait, circulating artificial hair strands and electrical cables on the floor create an entropy, making one wonder if these synthetic organisms and artificial plants represent a gradual decline into disorder. The visual language of her work has gained more depth, detail and visual noise. The mobile organisms are impersonal and uncanny as they have little to no resemblance to actual biological creatures.

Nevertheless, similar to the animal sculptures, or any of her two-dimensional sculptures, such as trees, comets and arrows, the weird electronic cradles photograph well. Maybe it’s the angle and lighting of the photographs or the fact that one doesn’t have to face their bizarre motions in a physical space, but they become more magnetic on the screen. While Novitskova’s work looks into the future, trying to predict the upcoming dynamics of the environment we will live in, it also functions as visual material that will end up on the internet again. The inner evolution of the pieces is to commute between the physical and virtual space, which makes the afterlife of an exhibition of the works fruitful, as it lives on according to the law of attraction on the interweb, especially if the photographs turn out to be half as cute as a sloth hugging a tree trunk.

Eva-Erle Lilleaed (b.1989) is an art historian and critic. She is currently working freelance and studies art history and visual culture in Estonian Academy of Arts.

Post-internet art in the time of e-residency in Estonia