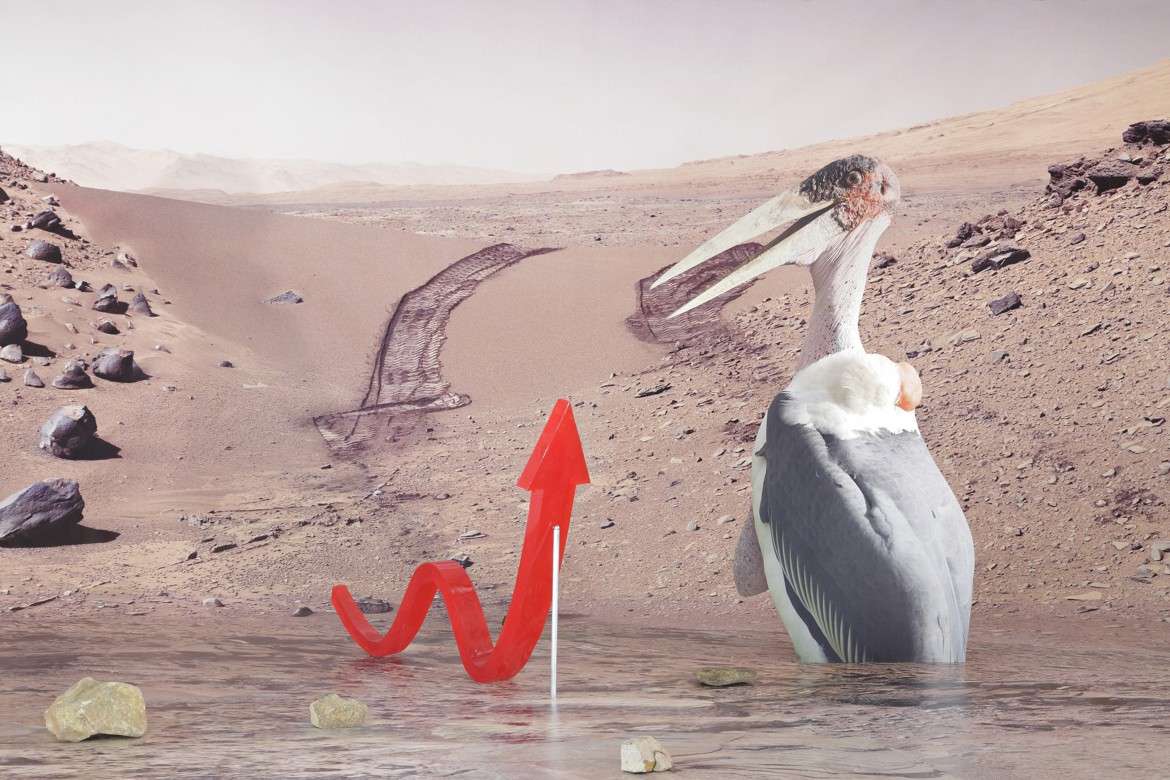 (NJL): The term ‘post-internet’ is rather ambiguous and slippery in terms of its generalised application. It seems to me that the term lacks specificity and rests somewhat too comfortably within its category: one that – quite rightfully perhaps, and at least expectedly – has avoided and resisted attempts at summation and definition, due to the vastness and diversity of the subjects at hand, and its differing approaches to culture as a whole, as addressed in and by a multitude of artistic practices. Thus, as a mode of enquiry, should we perhaps underline the term ‘post-internet’, move away from skirting on the surface of the category-as-container and come to terms with some of its specific workings instead?

Katja Novitskova (KN): Yeah, although I see the vastness and vagueness of it, for me the term has very concrete origins that I witnessed, with concrete people involved in a specific moment in time. The time was late 2009, and the place was Gene’s blog Post Internet in which he tried to outline certain emerging artistic practices that addressed the internet as an element in artistic production, structuring the art works in relation to or with it; the people were Gene McHugh and many artists that were addressed in his often loosely written essays: Marisa Olson, AIDS-3D, Harm van den Dorpel, Kari Altman, Martin Kohout and others. Gene was witnessing a network of young contemporary artists (who often knew each other from participating in the same online surf clubs, or IRL collaborations) branching from what was known as ‘net art’ into new territories of digital paintings, web-inspired sculpture, conceptual browser art that played with ‘contemporary art proper’ aesthetics, video art that was compiled out of visual blogs, etc. By 2011 the term became a catch phrase (not without the help of my editorial artist book project Post Internet Survival Guide 2010), and was picked up by the ‘cool’ surfing pop culture magazines, galleries and curators. A monster was born. I’m curious: how and when did you hear about it and what do you think are the most interesting sensibilities that the term is able to capture?

NJL: Although we are both from a generation that disposed of a ‘pre-internet brain’ in maintaining our daily living and working practices, one that has gradually dissolved into an internet of things, I must admit that my engagements with the field – this ‘collective entity’ of dispersed and diverging practices, unified by the common denominator of ‘post-internet’ – have been less gradual and smooth, and more distantly observed from the outside of the discussion proper. In other words, in my curatorial practice I have foregrounded several artistic positions – among your work, but also those of Xavier Antin, David Raymond Conroy, Oliver Laric, Silvio Lorusso and Artie Vierkant – in order to grapple with and address specific present conditions and tendencies.

What fascinates and interest me here, most of all, is the capacity of some of these artistic practices to establish material, physical and concrete analogies of essentially dematerialised substances, or data if you like. That is to say, a pooling and bridging of resources, pieces and traces of information, and materials that hover between and make us aware of the various dimensions we are both being responsive and subjected to as humans. In that, my current interest goes to the intersection of ‘the post-internet’ and ‘the posthuman’: the idea of our human indebtedness to the internet, and how that reservoir – as a boundless but not necessarily limitless expanse – has become an extension of our memory, or rather collective memory. The internet finding its inscription as an external hard-drive, so to speak, and moreover as a cognitive extension; not so much revolving around the posthuman in the sci-fi sense, with its physical body enhancements. Am I right to say that in parts of your work you also treat the subject of the posthuman? And in that, how do you perceive the linkages between the posthuman and post-internet art practice?

KN: Of course these terms are related, at least by their speculative declaration of a new state of being. Since I’ve started to make my own digital artistic experiments in conversation with my peers (before post-internet became a word) I’ve been dwelling on the relationship between technological advancement of certain human groups (like the military-industrial sector in the USA) and how those technologies reach and transform the rest of the world, both people and non-human organisms. Looking at iPad apps for cats or cute gif animations in a browser, it’s hard to remember that the computer originated as a military machine, as did the internet. Perhaps it’s even more interesting to be reminded that in the 1990s it was hoped that the World Wide Web would become a radical democratic tool that could provide an alternative space away from the structures of capitalist societies. Today when almost half of the world is online, we see war memes on our Facebook feeds, mixed with cute images, activism, advertisement, contemporary and vernacular art — all in one stream. The democratic potential never separated from the capitalist or military-industrial ones. There is a raw, actual material economy, history and reality to all the billions of data-orientated products, such as screen-based media, and all the signals we send through them: from universities and rare earth mineral mines, to shipping containers, Chinese mega factories, MediaMarkts and server farm buildings. I’m inspired by the visual and cultural ripple effects that are enabled by and that can be observed in these, if not ‘post-human’, then maybe mega-human extensions and ‘enhancements’ for networked communication. My work is almost a case-by-case aesthetic study of these effects I identify and then materialise, as sculptures or digital collages (in the end, they’re almost the same). What maybe then unites the ‘post-human’ and ‘post-internet’ is the necessity for ecological understanding of data and human culture, and their relationship to the non-human world.

NJL: As you say, both the richness of resources and the utter saturation of the internet – as a reservoir of attention-seeking materials and informations, on the cognitive trading floor, so to speak – are interesting foundations for any ‘post-internet’ practice and the works that might develop from that. Here we might observe a certain movement in ‘post-internet’ practice: to take certain information that is external to an art context, and embed it within the framework of artistic practice – through appropriation, displacement and manipulation – and to let the work reference and point towards an outside world. In other words, to go outside of artistic practice by means of artistic practice – by deploying that state of mind. To me it seems that ‘post-internet’ has value and critical potential in that area: not as the description of a movement, but in terms of what makes it turn, even spin, by what means and how it can slice through an often hermetic art world and move elsewhere. This makes me wonder: how do you proceed in establishing certain analogies in your work? What are your starting points and methods?

KN: I very much agree about the significance of embedding the ‘outside world’ in the contemporary art context. One of the anthropological explanations of art is that it is a practice that captures human attention and provides thrilling experiences of certain patterns to our socially activated brains (in numerous multiple ways). Online content and economies are fuelled by the attention of billions of people, and the dynamics of attention are at the frontier of content competition online. So maybe ‘post-internet’ as a mode of art-making began at the moment these things began to merge on a large scale, when screens became the main way for people to experience art or the documentation of it. One of the effects that I’ve dealt with in my work is the flattening of images and their origins that occurs within the constant flow of visual information. Images of art online co-exist and are materially equal to memes, nature, fashion, friends, rappers, ISIS, parties, products, protests, food, babies, pets, HD, low resolution, CGI, amateurs, advertisements, viral campaigns, Kim Kardashian, ebola, Mars rover landings etc. When I bring a widely-shared image of an animal into a gallery space, I physically connect what is already close online. The documentation of the installation becomes another online image, but hybrid and self-aware. Being internet- and attention-aware as an artist, gives access to new kinds of knowledge about human beings, new kinds of aesthetic tools and new kinds of ideas of what art is or can be, all in ‘the age of the social internet’ (prior to the internet of things… or whatever comes next). 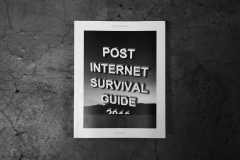 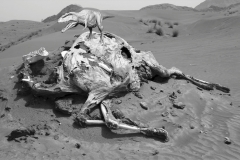 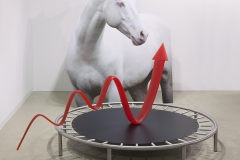 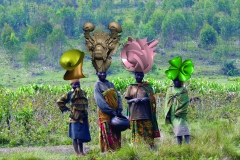 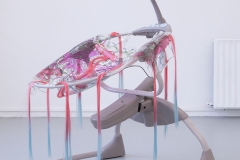 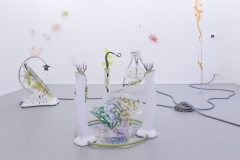 Katja Novitskova (1984), artist. Born in Estonia, lives and works in Amsterdam and Berlin. She researches ongoing evolutionary transformations of matter, social and informational processes in the present globalized world, developing personal strategies to render its future forms. With a background in visual semiotics, graphic design and new media, her works range from digital collages to sculpture and installation, collaborative projects and artist publications. Between years 2013 and 2014 she was a resident at the The Rijksakademie van beeldende kunsten in Amsterdam, Netherlands. See more at: www.katjanovi.net

Niekolaas Johannes Lekkerkerk (1988), works as a curator and a writer. In 2012 he founded The Office for Curating, which currently operates in and from Rotterdam, The Netherlands. The Office for Curating acts as an assembler of a growing programme of exhibitions (including publications, texts and speech acts) and as a support structure for initiating exhibitions as a rise to the occasion – presented in different shapes and configurations, along different temporal structures and rhythms, as hosted by different institutes. See also: www.theofficeforcurating.com