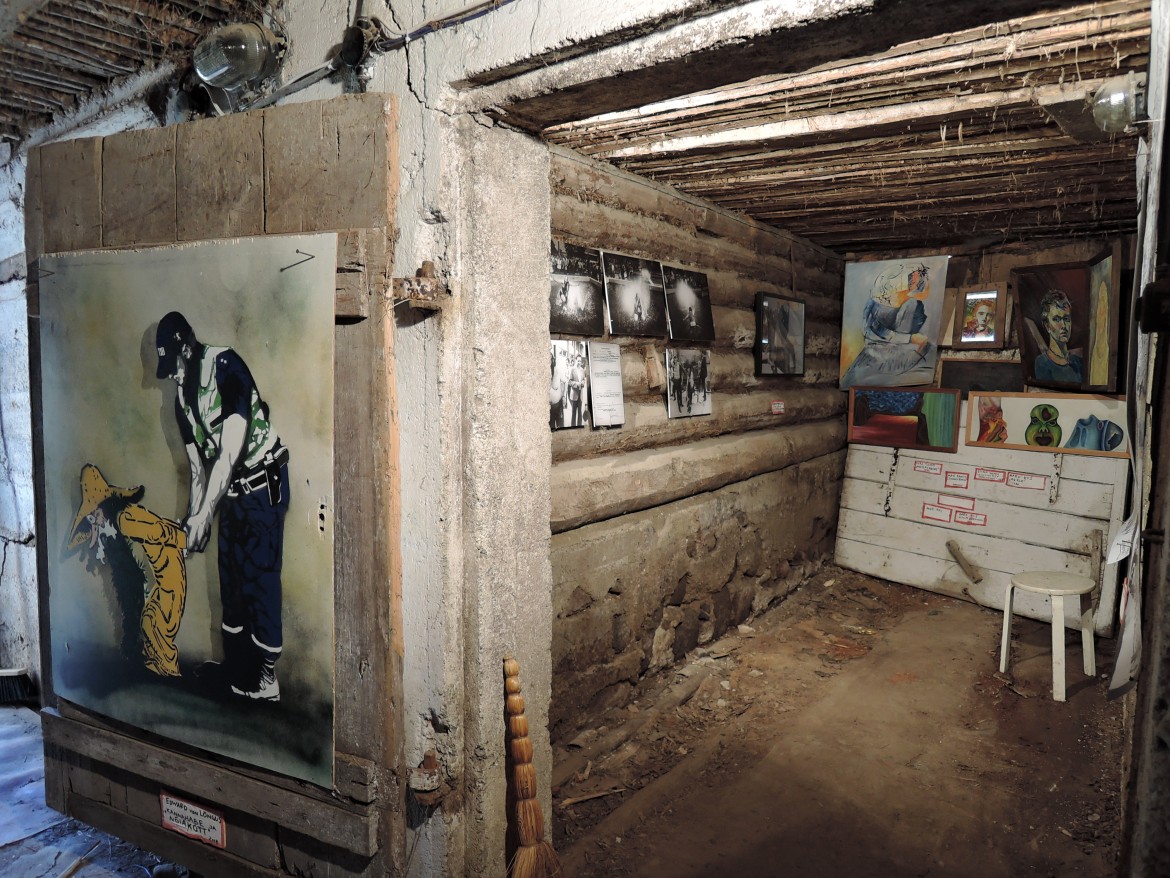 “My reaction as a punker to the surroundings was essentially the same as when I was a small boy and was forced to eat greasy sauerkraut soup with bits of hairy and wobbling fat in it; the soup with everything in it was extremely revolting to my digestive system, but the others nevertheless tried to convince me that it was very good, in fact the best food of all: my reaction was screaming and vomiting. The next day I overturned all the kindergarten dustbins. When I grew up I climbed up on the stage and disgorged everything that had been crammed into me.”

– Ivo Uukkivi on bumping into punk 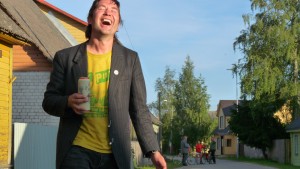 Punk as subculture began in the first half of the 1970s; Western influences, including punk, arrived in Soviet-occupied Estonia after some delay. The precise date is certainly subjective – punk can be seen in whatever activity, man or event – but the first punk bands in Soviet Estonia emerged in the second half of the 1970s. The movement really took off beginning in the 1980s, and the breakthrough was probably the unrest and brief rebellion of young people in September 1980 in Tallinn, in which punkers also took part. The event indicated the quietly growing dissatisfaction and mutinous mood among the younger generation in society.

In the second half of the 1980s punk became, almost overnight, hugely popular and by the end of the decade a punker could calmly walk across Victory Square to the Moscow café without having to worry about hostile militia. In fact, punk was probably the most popular youth movement-subculture during the days of the Singing Revolution. Hence the strange fact that punkers, generally the enemies of capitalism and nation-states, are regarded in today’s Estonia almost as freedom fighters without whose contribution the country would not have regained independence. This is why the first punk song festival took place here, and the president of the country attended.

Restoring independence had exactly the expected impact on punk culture: devastating. The sudden freedom and responsibility, cowboy capitalism and the grey 1990s in Eastern Europe meant that the majority of punkers either stopped being punkers (enemy number one, the Soviet Union, on which punk essentially leaned, collapsed), or found another ‘hobby’ or disappeared into into garage corners. This situation remained more or less unchanged for about twenty years.

We now arrive in 2014, when quite a bit has changed, although some indication of the process has been evident for several years (e.g the aforementioned punk song festival, the poet and musician Tõnu Trubetsky has produced quite a few works on anarchism and punk etc). In June 2014 the most extensive punk art exhibition in independent Estonia was opened in the Voronja boatshed gallery in a village near Lake Peipsi: Provisional Government. Forty Years of Punk. As a co-author, I was privileged to be present at this event and I must confess that at least for me it was the most memorable cultural event of the year. If we interpret art from an elitist and purist point of view, many artists would naturally refuse to associate the Voronja event with an art exhibition at all, although quite clearly the punkers do not give a toss, precisely the reaction of the normal viewer. 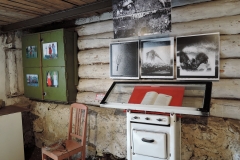 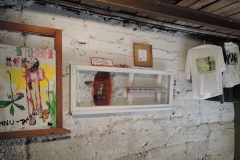 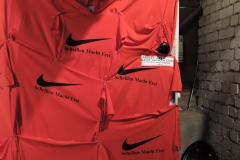 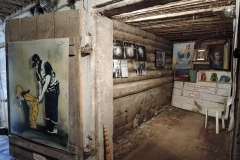 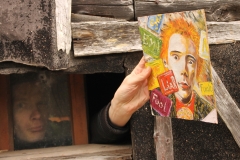 The issue of art and non-art is linked with the selection of artists who participated in the exhibition as, with a few exceptions, Voronja displayed works by punkers and not professional artists. Hence the key question: is punk art produced by artists or punkers? The Voronja exhibition took the latter approach, which does not seem such a bad thing to me, as it makes the display rather more credible. It would be difficult to accept works by professional and educated artists who just call their work punk, whereas there is no need to categorise Villu Tamme’s poems and Freddy’s artworks. Everything is crystal clear: it is pure punk.

The diversity of works at the punk exhibition is certainly worth mentioning. The Voronja display presented all forms of art: video, readymade, poetry, photographs, installations and even embroidery. As the exhibition was on the whole retrospective, the works included more than the usual number of documentations about punk art created during Soviet Estonia, e.g a photograph of Matti Moguči’s simple, but striking scribbling over a winter forest: “People, be careful, I love you. Moguči“. Mention should also be made of Anders Härm’s installation Three patriotic speeches: a functioning toilet made of red t-shirts. The writing on the shirts is still visible. Besides visual art, the display contained a lot of reading material, for example the work of various punk poets. I would like to present here just one of Freddy’s short and impressive declamations:

“I am a punker

I am poison I am vice

I am the will of the Estonian people

I am a hamburger

Come and gobble me up

Exhibition as a breath of fresh air

There were several differences from more conventional events. It was decided to have the exhibition in a small rural gallery, near the culturally rich Lake Peipsi. The far-away location did not pose any problems (people were brought by buses from Tallinn and Tartu); the weird location actually worked well, as it provided the event with a free and relaxed atmosphere: something quite rare at Estonian galleries these days. The non-compulsory ‘compulsory’ opening speech was followed by a noise and culture programme, where the stage was a windowsill in a room without doors. Freddy, Chungin, Kiwa and many others performed there. The charm of the undertaking lay in how free and punk everything was because, besides looking at art, the atmosphere and surroundings encouraged various other activities as well. For example, looking for the shop for cigarettes and beer in a small village by Lake Peipsi with Freddy and Villu on a mild summer evening remains one of my most beautiful memories of the year.

Although I did not get back to Voronja this summer, according to the newspapers a surprising number of people visited the gallery. We are all very grateful to Kiwa, who was called the ‘star punker’ by Õhtuleht; he has done a great deal to popularise punk. The pessimists can of course claim that too much exploitation is actually damaging to punk, or that it is nothing but pointless tomfoolery, but at least in my opinion that view is excessively cynical (considering the colourful history of Estonian punk).

We can only hope that the summer exhibition will not be the last of its kind, and that future years will bring other punk art overview exhibitions in some corner of Estonia. By supplementing visual arts with poetry, music, film, workshops and forums, an event can be turned into a punk festival, something that can attract attention worldwide. However, if people cannot be bothered to think about future events, it is worthwhile rummaging around in the past of punk (as happened in Voronja): so much exciting stuff is still waiting to be discovered.

Voronja gallery was established by Kaili Kask and Raul Oreškin as a private initiative. It is located in an abandoned boat shed by Lake Peipsi. According to the owners, over one thousand people visited the first season’s punk exhibition, one third of whom were tourists visiting the area. https://et-ee.facebook.com/voronjagalerii

Joonas Vangonen (1992) is doing his BA at the history department at the University of Tartu on the topic The Punk Movement in Soviet Estonia. He participated in the art project Die Jung and in the exhibition of the university’s MA students in painting. He is involved in the art group Projekt 55.