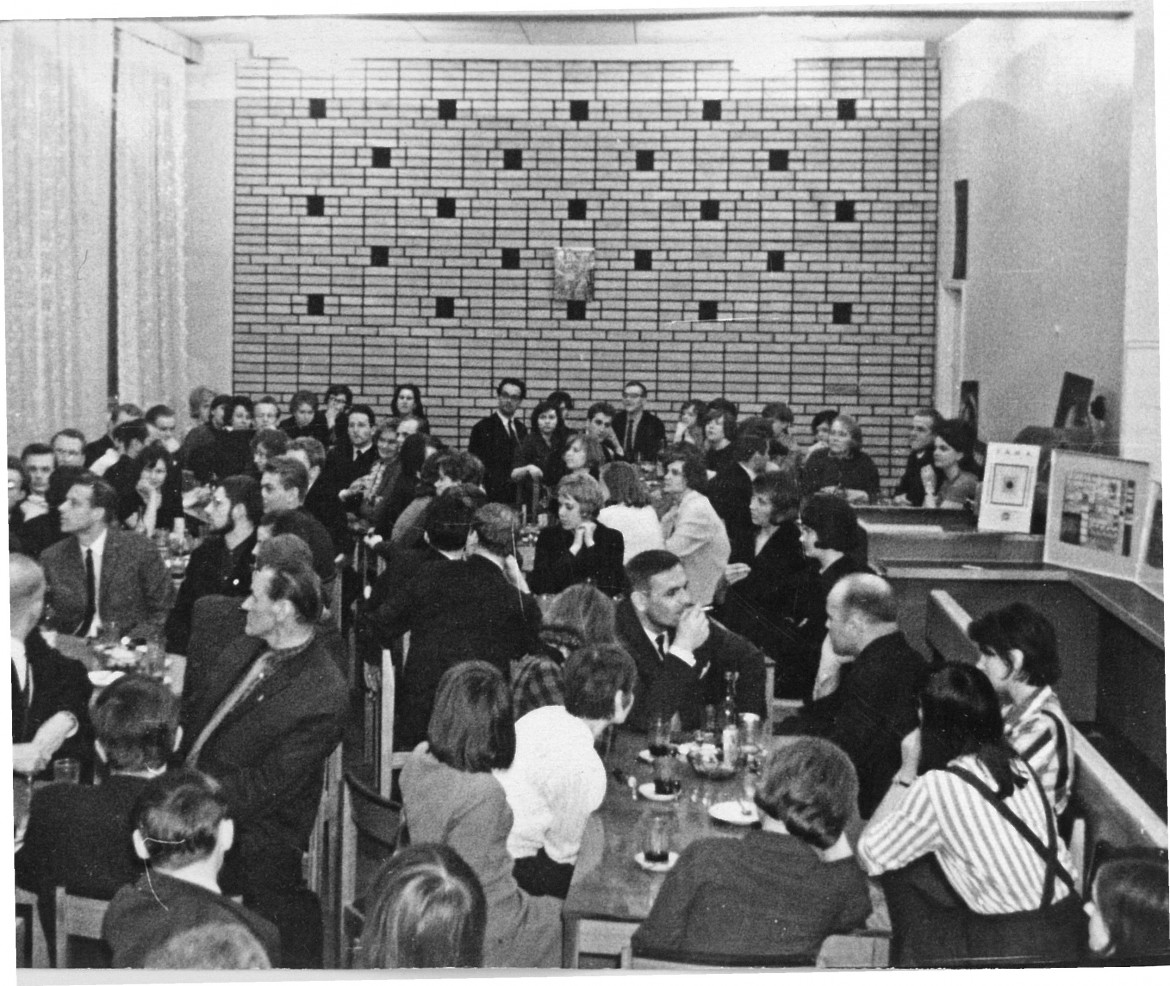 [Not a valid template]

I started at the Estonian State Art Institute in 1966, when the old neo-Jugendstil building was still standing. The entrance was via the grand main staircase, with artistic bas-reliefs above it. These were demolished in 1971 just when I was defending my diploma thesis. At the foot of the main staircase in the entrance hall, a woman sat in a glass cubicle dressed in white. She was the porter and switchboard operator who checked everyone coming in and connected the internal phones with the school’s main line. When I entered the school for the first time, a student, a friend of my sister’s, took me to the third floor to draw a plaster copy of the Venus de Milo, as I needed to prepare for entrance exams. Everything was very exciting, especially seeing my first nude in the drawing class.

The curricula at the institute at that time were neo-Stalinist, based on the art concept of socialist realism. Lecturers had to attend courses every now and then at a leading art school in Moscow. In addition, specialists from the capital arrived during every five-year plan period to check the standard of teaching. Today’s academy is being evaluated, i.e checked, by specialists from Europe  – which rings a bell, somehow.

In order to avoid the strong ideological control in most art fields, I was advised to opt for architecture, where several architects from the period of Estonian independence (1920s and 30s) were still teaching. These professors not only taught excellent architecture, but the customs of pre-war intelligentsia and broader attitudes towards the art of building: a good architect of the 1930s was not merely a specialist in a narrow field, but an intellectual who understood and influenced the whole cultural sphere. Architects had to learn realist painting and drawing, and our attempts at modernism were not totally suppressed. Drawing skills certainly came in handy later both in art and in architecture: the level of today’s young architects and artists is not exactly overwhelming. There have been plans to abandon all drawing in architectural studies, although it is particularly through drawing that an architect learns man’s proportions and understands that architecture is, after all, meant for living creatures. However, drawing lessons need not be quite so dry, boring and narrow as in my time.

Much more harrowing than the long drawing lessons, where only a few teachers were able to teach realism, were the numerous political lectures and on top of that two years of physical education – mens sana in corpore sano. All this was not taken too seriously, but the subjects had to be taken anyway, for example swimming 25 m in a pool and the totally absurd ‘scientific communism’. It was clear by the 1970s that the communist country, socialist camp and people’s prison had reached a dead end in its development, but this dramatic period lasted for another 15 years and demanded many victims. If anyone wonders why today’s Russia is so aggressive and brain-dead, governed by former KGB officers, we should think back to the Soviet Union that ruled half of Europe. It hid its militarism and nuclear weapons behind its supposed active fight for world peace, and behind the label of friendship between nations sneaked its agents and terrorists into Western countries.

Studying at the Art Institute would have been dismal without our inner freedom and without the Student Research Union. Beginning in 1964, it displayed work free of socialist realism, organised exhibitions of independent works, evenings of discussions, and performances with musicians from the conservatory. I took an active part in such undertakings, as indeed did the Komsomol committee, who were not keen on the institute’s communist ideals. The former Stalinist rector F. Leht had been sent back to Russia and replaced by the young sculptor Jaan Vares, who supported the students’ aspirations for free creativity. He described the students’ experiments to the Communist Party bosses as temporary childish play. After the Prague Spring of 1968 Estonian students organised protest demonstrations against its brutal suppression in the autumn of 1968 and 1969, called the ‘processions with torches’. More serious pressure on universities began in 1970, gradually gathering force until the period now called the ‘stagnation’.

In 1995 when I entered the low vestibule of the annex of the modernist, newly named Tallinn Art University, with its rather inadequate architecture, everything had been ‘revamped’. I was invited back from Finland to teach by the new rector, Ando Keskküla, who undertook a serious renovation of the barely alive, still neo-Stalinist university. He made a shrewd move by retiring all Soviet-era professors, bestowing on them the grand title of professor emeritus, and inviting a new generation to teach instead. As the lecturers from the Republic of Estonia had long departed from this world, this mainly involved those who had gained power after WW II as ‘Stalinist youth’, whether they were really qualified or not. Architecture was taught by graduates of the Tallinn Polytechnic Institute from the 1950s, several of whom held important jobs, but none of them were established architects.

Ando Keskküla’s plans were typically bigger than he was ever able to realise, but the new professors were at liberty to reform their respective areas and thus completely new specialities were introduced, e.g interdisciplinary art and new media. The school acquired computers, video projectors and other modern technology. International relations were pursued; seminars, workshops, conferences and exhibitions were organised, directed at the newest art. The rector began actively searching for a new location. Ando Keskküla, whose term ended in a scandal, achieved a great deal in terms of innovating the school and the study process; in Estonian terms his efforts were revolutionary, and the school, renamed an academy, managed to restore its authority in society by the early 21st century.

In 1995 I was appointed a professor of general composition, I managed to establish a special chair of composition and colour study, and tried to include them in every speciality. In the symbolic room no 312A, a centre of general subjects was established. The artists-professors from the centre later curated, now through different chairs, drawing, plastic anatomy, composition, colour study, painting and sculpture in all specialities. When the academy joined the Bologna declaration 3+2, the academic council decided that these subjects, together with art history and language studies, would continue in all specialities, with a few concessions only in art history. The idea was that everyone – architects, ceramicists and later also restorers – would know the main art subjects at more or less the same level. In practice, different fields of art are, after all, intertwined and supplement one another. A uniform aesthetic and intellectual level of artists is very important. In recent years, this principle has been abandoned. The academic council has so far failed to change previously taken decisions, and now the heads of every subject can invite anyone to teach these subjects, regardless of the lecturer’s abilities and creative standards.

The chaos at the academy began immediately after Ando Keskküla left: thoroughly worked-out study programmes were gradually forsaken. New ones were developed, but these were more like documents than plans to enhance creativity. The school has developed towards academic capitalism, where the only things that matter are formal documentation, and accounting to the ministry and to the institutions at home and abroad who finance the school; the number of officials has grown, the number of professors has fallen and the emphasis is on occasional low-paid lecturers. I have found that during the reign of Rector Signe Kivi over the last nine years, about 40 people have either been sacked, forced out or demoted! The directorate seems to think that the academy does not really need prominent people in various fields, but instead diligent pedagogues who follow the instructions of the management and who are virtually unknown in art circles. One exception is perhaps the Institute of Art History, a fiercely independent unit that has not fallen apart. I list myself among the demoted as well, as the moment I became emeritus the chair of composition and colour study was at once closed down. And my 13-year systematic work, including four books and one collection of articles, crumbled into dust. Professors emeriti were allocated ridiculous fees, four to five times lower than their salaries had been. The academy thus brought all former professors, the best in their fields in the country, to an economic level that does not correspond to their actual needs or their contribution to Estonian art education. Some professors emeriti occasionally lecture, and not because of the modest extra income, but out of their good will and wish to keep their specialities afloat. This attitude towards the pillars of the academy has certainly damaged its reputation.

And that was not all – a few years ago the academy building itself was demolished, and a new one has not even been started! Careless thinking led to the end of the traditional integration of different specialities, an end to creative communication of students, often lasting a lifetime, from various fields of art. The link between the fine and decorative arts and architecture, which had been a characteristic feature of our school internationally and had been realised in cooperation, was disrupted. No wonder that the University of Technology, well aware of our problems, wants to grab control of all architecture teaching! The academy is now spending a fortune on rented premises, whereas money is lacking to pay deserved salaries to the lecturers.

The academy is currently going through dramatic times and celebrating its 100th anniversary seems like a feast during a plague. In 2015 the rector and hopefully most of the administration will be new [In January 2015 Professor Mart Kalm was elected as the new Rector of the EAA – Ed]. I hope the new team will analyse what has happened over the last two decades in the light of joining the Bologna declaration, consider the academy’s development options and restore its authority. The paradigm of Estonian art education has of course changed: there are several successful higher education art, design and architecture schools, which means that there is no longer any reason to enlarge the Academy of Arts into a huge establishment; it should rather be a smaller international first-rate university with excellent lecturers, offering mainly art and architecture courses: a genuine academy at the higher education level. No self-respecting nation today can manage without high culture, which we need in our art and architecture. The communists were afraid of the elite, declaring that people were equal, even in terms of being uneducated, at the same time being the most equal of all whilst in power on the Animal Farm. In order to survive as a nation, we ought to aspire to be at the very top in fine arts!