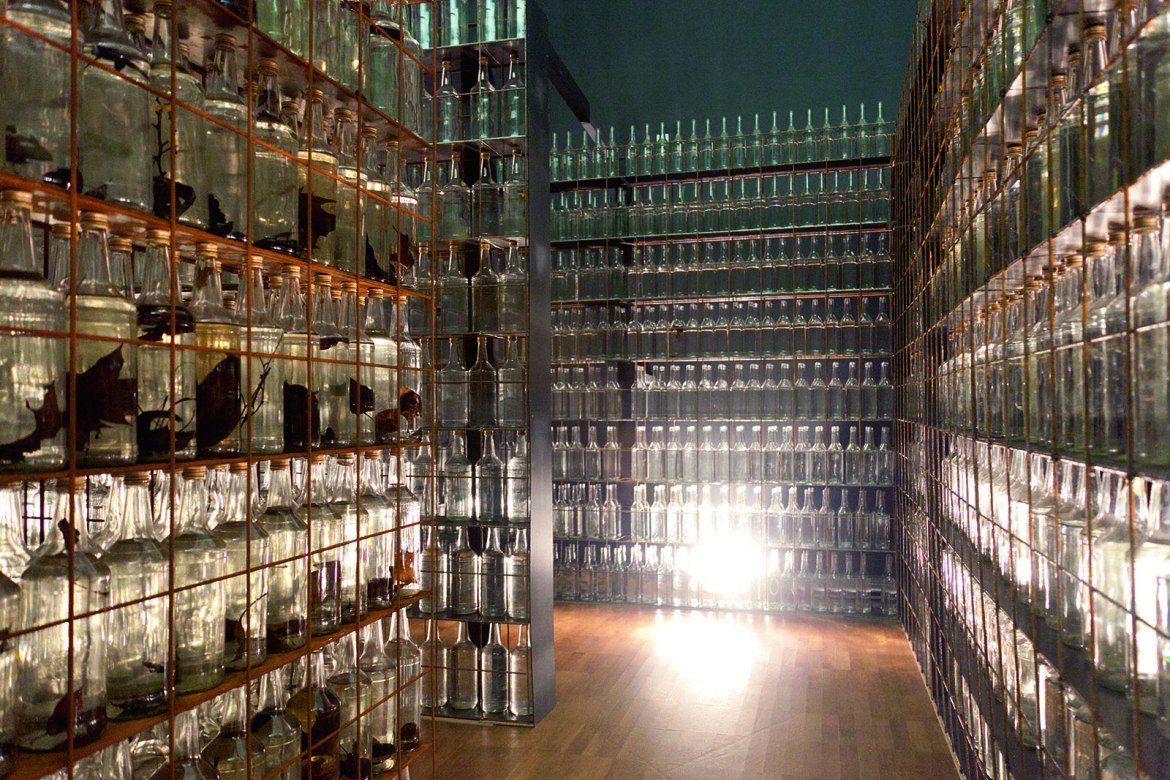 The exhibition of Raoul Kurvitz at the Kumu Art Museum cannot only be regarded as what it most clearly seems to be: a collection of artworks which manifests, among other things, a flow of meanings, religious solemnity, transcendental yearnings, expressive gestures and focusing on the subject. It is ‘something else’ too, something that in an institutional cradle makes the first memory-political attempt to perpetuate not only the art history of the late 1980s and early 1990s, but to structure one of the most contradictory and emotional periods of Estonian history and its state of mind through the format of an art exhibition. Irrational, emotional, expressive and Dionysian phenomena are placed under the cool dissecting knife of Apollonian analysis and for the first time become history. 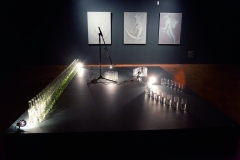 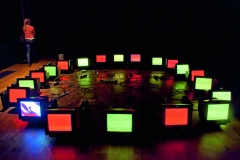 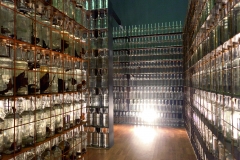 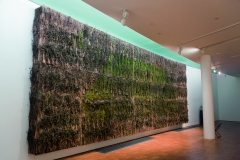 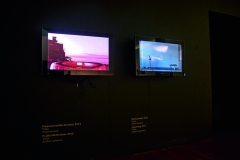 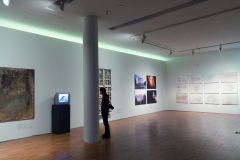 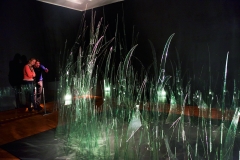 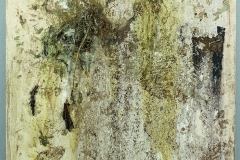 Raoul Kurvitz and Group T, which formed around him, were a collective author and the engine of the avant-garde of the second half of the 1980s, presenting a number of ambivalent performances, installations, paintings and other projects. Kurvitz’s creative activity continued, with intervals, through the end of the 1990s and is still going today. On the way, it passed through various checkpoints, such as vast installations, searching for quasi-religious experience and gradually more pulverised activity where music now dominates. Unlike two earlier personal exhibitions of Kurvitz’s contemporaries at Kumu (Ene-Liis Semper and Jaan Toomik), the current display has a clearly retrospective emphasis, thus focusing on Kurvitz, the late 1980s avant-garde and the relevant period for the first time.

What then was the ‘underlying tonality’ of the era that addressed not only transitional Estonia, but any society finding itself in clear political turmoil, especially in Eastern Europe? Various things have been mentioned: enthusiasm, expectations of something new, eagerness to roll up one’s sleeves, etc. In the context of Kurvitz’s work, however, what seems to matter more are emotions, especially anxiety (even slight schizophrenia), a sense of apocalypse (plus the fear and excitement caused by it), but primarily the accumulation of different (positive and negative) tensions and solving these tensions through the body and corporeality. Kurvitz has thus firmly distanced himself from any wish to ‘make art’; associating past performances with the concept of art was avoided, replaced by a ‘pure thirst of self-expression through bodily action’. Compared with the earlier Estonian performance tradition, the forceful actions of Kurvitz and Group T were considerably more corporeal, expressive and even more Dionysian – if one considers various jubilant rituals taking place in society at the time (mass nocturnal singing, demonstrations, processions, etc). Kurvitz has not concealed the intense relation of his work to quasi-religious aspirations, and hence he does not differ from but resembles one of the main roots of Estonian art that had – especially in the 1980s – and has highly valued various mystical, fairy-tale, folkloristic tales and also a certain vision and shamanist touch. However, I would not go so far as to describe Kurvitz’s actions in terms of being overpowered by others, sacrificing personal self and the like, all typical of religious practices (according to the participants all actions were ‘more or less under control’). Kurvitz, too, has denied going along with a sense of intoxication in society, because “in blasphemous pleasure and in a reverse manner we decided to show the rulers of the collapsing empire, who in their craze of destruction were having the last orgiastic party.”

How can Kurvitz’s work be described outside the folds of history? On the one hand, there is certainly a subject focus (which Group T stressed and also denied in their manifestos), reaching extreme individualism, an almost Nietzsche-like belief in ‘flame-throwing inside an individual’, which ‘makes everything around it sparkle a thousand times more brightly.’ The unhooking from the social obligatory sense of belonging together at the time was sharp and romantic. It could also be called the pleasure of an extravagant nobleman (that among other things (again) introduced to the local public the possibility of an artist who openly discarded the standard norms, as back then the more active authors were those who preferred conformism and daily comforts). One mirror of this attitude was a certain destructiveness, self-disregard or the surrounding illusory entirety, and being aware of one’s own dark urges. The self-aggressiveness of Group T was part of a wider demolition job, an elaborate mixture of irony, decadence and anarchy, and evidenced a decision to postpone the emergence of fixed meanings by producing an extremely brutal, almost de Sade-like atmosphere. On the other hand, there were frequent references (occasionally almost sentimental) to the praise of existence itself. The nobleman Kurvitz can thus unite, within one work, a sense of the apocalypse and the acute presence of natural material that symbolises continuity (e.g in Youth and Middle Age of East-European Plains), plus an irrational animal impulse and the relevant beauty of materiality (e.g in Sus scrofa). He often uses elements that indicate destruction, e.g fire, while employing fragile materials, such as glass or its fragments. Although he is an architect by profession, he constructed a church made of windows that barely avoids falling apart, a personal aristocratic temple, where he, with the slightly stylised name Raoul Kurvitz, celebrates religious experience.

Although the work of Kurvitz contains strong individualism, he also constantly veers towards different quasi-religious and self-diluting gestures, especially in painting. Kurvitz found himself in a situation where the local tradition of ‘picturesque painting’ had exhausted itself, but painting flourished despite the dead end, producing pseudo-expressive works that relied on mythological scripts. In their forceful aspirations for the sacral, the paintings of Kurvitz, with their poetic titles, formed an altogether different chapter. His works rely on the belief that a painting is not simply a painting, but something that makes existence visible: a painting is a revelation of ontology, a sacrament of the visible, where divinity and existence in their splendour become visible. Kurvitz’s fascination with religiosity is constantly traumatic, because it is hindered: in different contexts, he has talked about the ‘quasiness’ of his religiosity, as well as about the continuous postponement of catharsis, regarding the latter as a specifically East European existentiality.

In the context of art history, Kurvitz’s paintings also become fascinating through the perspective of Jacques Rancière, who thinks that existence is in the tool kit of those who mock the avant-garde. Our art history, however, is certain that Kurvitz’s work is a major supporting pillar of the local avant-garde. Is it enough to admit that the avant-garde nature of his art is hidden in its constant moving away, non-fixedness and incompatibility (and any perpetuating exhibition is essentially against such avant-garde and not for it)? Or should we recall his wish to be a ‘NON artist’ and see, instead of the avant-garde, an aristocrat wandering amongst barbaric social rituals, who, walking around in the mud of pastoral contexts, tries to preserve his existential nerve? And this is not the perception of the absurdity of a small nation’s existence (we shouldn’t exist, but we do nevertheless), which national romantics have been recently talking about, but oscillating between a physically (bodily, hence an uncivilised) perceived will of life and self-destruction, supported by decadent philosophical attitudes. A constant tension emerges when you wound yourself and then beg for a religious redemptive experience. There is an admiration carried by industrial romanticism towards extra-human existence, and a seeking for flow, existence, and the opportunity to perceive God. There is the will to live of the corporeal self and, at the same time, someone keeps whispering in his ear: let go.

Contemporary art encompasses all the rest