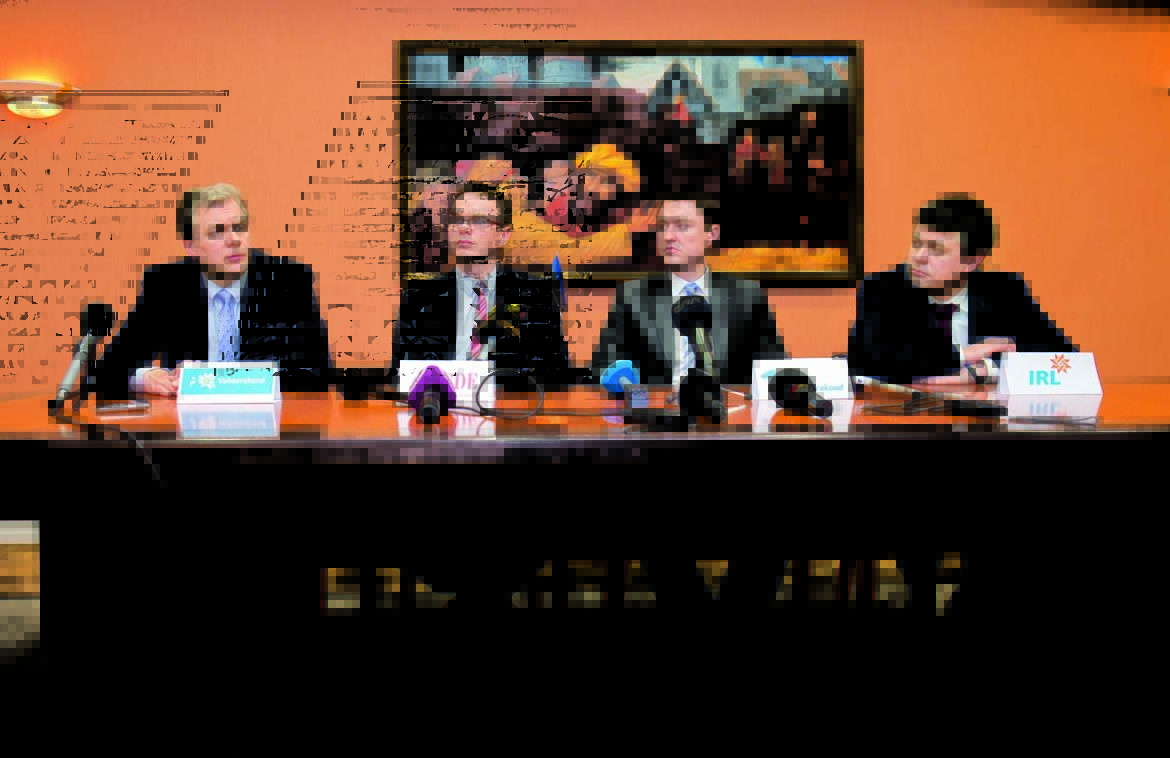 Spring 2015 in Estonia was like it always is: the weather never quite warmed up and the right-wingers won the elections. Less than 24 hours after the election results were announced, it was already clear which parties would form a coalition, and the following negotiations seemed just cosmetic touches. The leaders of three parties gathered every morning, and every afternoon they took a seat at a long table with a veneered top for a press conference to offer an account to society of what had actually happened behind the closed doors. During the first days, full of enthusiasm and expectations, the flower arrangement on the table was so big the cameras were barely able to capture the blooming chairmen behind the tulips. A few days later the bouquets became smaller and then disappeared altogether.

Another thing that changed was the wall behind the chairmen. On the first day it was simply white and citizens could project their dreams and wishes on to it. (More sensitive people were probably watching the alternating light and shadow, thinking about Robert Rauschenberg’s White Paintings (1951).) The empty screen for interpretations was however quickly replaced by a painting in a golden frame. Although the photographs in the media only show the lower edge of the painting, it is not difficult to recognize Roman Nyman’s (1881–1951) painting, probably made in the early 1940s. As is typical of Nyman’s works, there is a boat dragged ashore, a field of stones surrounded by a stylized contour and a bit of sea, where the blue nicely harmonises with the wallpaper and the chairmen’s jackets/suites?. Nyman painted dozens of similar northern Estonian coastal scenes, and a notebook preserved in the archive reveals that during World War II he used his paintings as exchange goods with German officers. Nyman received cigarettes and food and the officers posted views of the occupied territories back home, preferring paintings, as a much more ‘cultivated’ medium, to postcards and photographs. They were, after all, intelligent, as Germans are known to be in Estonia to this day. A few years ago when the art collection previously belonging to a prominent nazi, former head of the local Security Services (SA) was auctioned, the TV coverage focused at length on a painting by Nyman that the grateful employees had gifted to their chief. “This painting constitutes an escape from reality,” commented the TV host and added that Nyman was a good artist: “there is a reason why his work hangs above the desk in the president’s office.”

As the talks unexpectedly began to drag on, the press conference location soon changed and a new painting appeared behind the chairmen: Jüri Arrak’s Builders of the Old Town (1985). This painting circulated in the Estonian media for the next three weeks, reaching the social bloodstream every day via newspapers, TV programmes and internet portals. Thus they sat there – the chairmen of three parties – with Arrak’s painting behind them. The plot connections between the painting and the coalition talks are even too obvious: in the first, weird characters (probably biblical) are trying to build the town of Tallinn, stone by stone; in the other, the haggard-looking chairmen are trying to do something similar with the whole country. (Incidentally, Tallinn and the country are governed by different parties, who are in acute conflict.) The work was ideologised and it became the visual comment of power construction but, besides the painting, Arrak’s artistic mythology was hijacked as well. There are few visual images in Estonia which commonly circulate in the social consciousness, and Arrak’s original handwriting is one of them. He was among the most significant avant-garde artists of the 1960s, and his assemblages and early paintings greatly contributed to the development of the local art pour l’art trend of modernism. Like many other Estonian avant-gardists, Arrak was keen on various religious and esoteric teachings (he once told me how he used to be fascinated by Castaneda, went running in the woods with a blindfold over his eyes to seek spiritual teaching, did karate and built a stupa on the beach), and soon turned to Christianity. The paintings of his subsequent periods often rely on biblical motifs, where grotesque characters with the backs of their heads torn apart are doing great symbolic deeds with clearly recognisable moral aspects. “So singular and charmingly perfect, so original,” reads an internet comment. “One of the few truly Estonian artists,” adds another.

Builders of the Old Town is not the only Arrak painting that has been used by politicians as a suitable background in recent years. “The office of the Prime Minister is furnished with the dark brown furniture from Toompea Castle that has served all of Estonia’s heads of government, and which combines both Baroque and Gothic styles,” stands on the homepage of the government residence, and it continues: “The Prime Minister’s office is decorated with a painting by Jüri Arrak: Käskude saamine, 2001 (Receiving Commandments). The painting was specifically commissioned for this room. The artist took his time and spent a few hours sitting in the office for inspiration. The idea emerged to depict the Old Testament episode of how Moses, having got his commandments from God on the mount, descended and took the commandments to the people. In the artist’s view, the Prime Minister is the chosen one who, like Moses, conveys the laws to his people.” The introduction ends: “One of the two fireplaces in Stenbock House is also in this office. The big carved grandfather clock in the corner emits beautiful chimes every half hour.”
The problem does not lie in Jüri Arrak’s paintings. What is questionable is why Estonia, which in the last few decades has always aspired to present itself as an innovative, open, bold and swift country, surrounds itself at the state level with visual images that perpetuate conservative values. The party trio at coalition talks, where everyone promised decisive reforms, surrounds itself with homeland and biblical motifs, and the 35-year-old prime minister juxtaposes himself with Moses. It is probably not a wholly conscious programme, but instead a misreading. Things like that happen. A younger member of an extreme conservative party recently circulated an abusive message to all liberals, where he called for a fight against immigrants and for the nation, finishing his letter with … Bob Dylan’s line from the anthem of human rights activists, The times they are a changin’.

Still, there could be another character and his name is God. Looking through dozens of photographs of the coalition talks, the paintings in the background and the prime minister against the background of Moses, you inevitably recall Dietmar Elger’s claim about the paintings of Gerhard Richter: a photograph emphasises the momentary and fixes the situation in its present, whereas a painting is instantly placed in the art historical tradition, at once makes the motif transcendental and allows it to appear timeless and generally valid. If the coalition talks had reached us only in photographic form, they would have emerged for us as momentary and in the present. Paintings on the walls, however, afford everything quite a different pretension. Paintings that surround power in a sense belong there by right, organically and logically. The attraction of pictures and power are the same: we like both because they seem like openings into transcendentalism. Leaving a wall bare and open for interpretations would fill both politicians and viewers with horror. 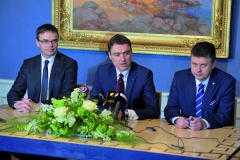 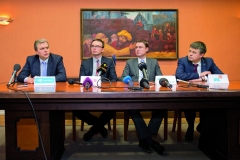 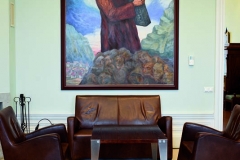 The one who breaks the rules wins in art