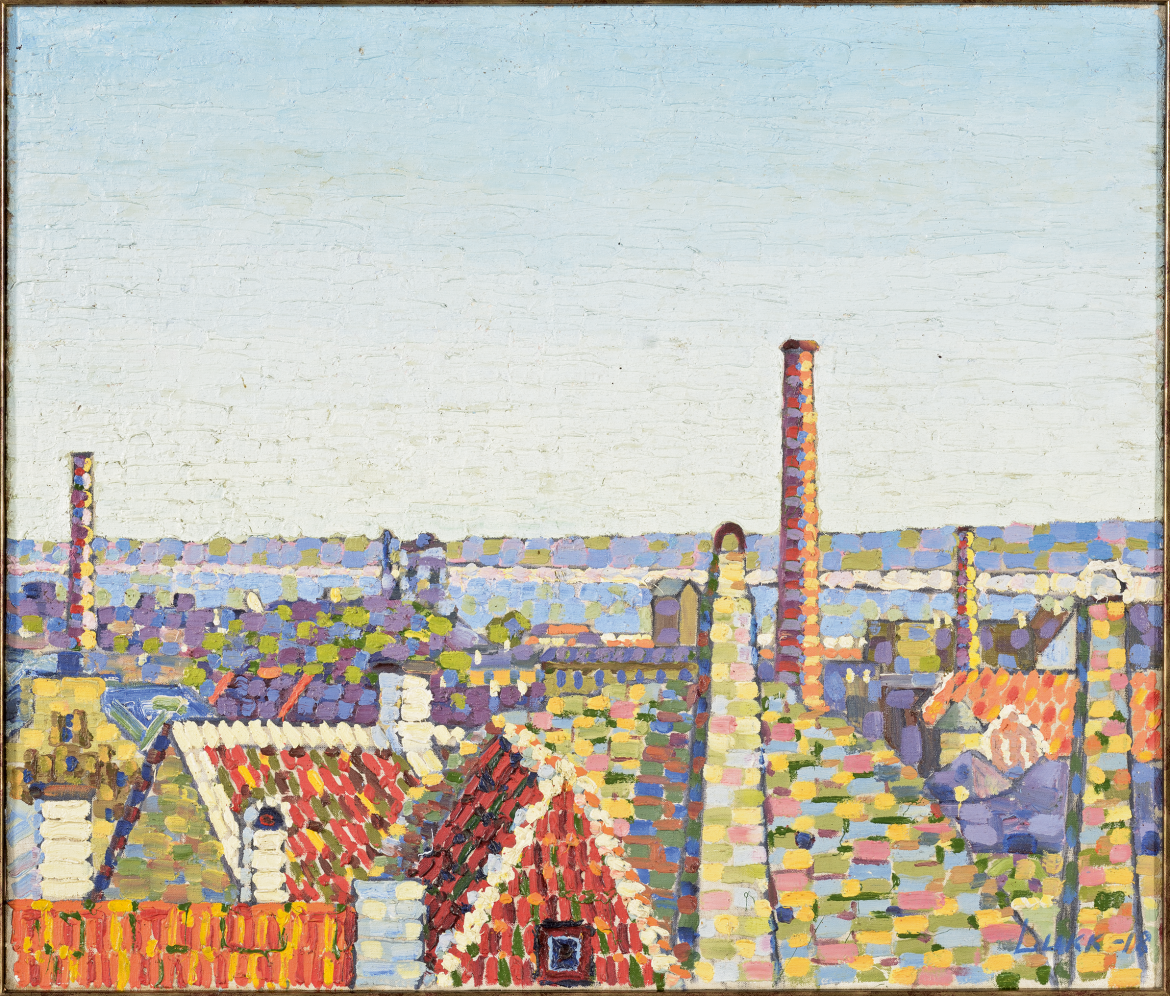 In March 1919, a newspaper published a few columns mixed in with adverts. “It is not right and proper that we send off the first few vital intellectual forces of our small young nation, which is only beginning to get its bearings, straight into the line of fire,” wrote Ants Laikmaa, one of the founders of Estonian 20th century modernism. “This is not right and proper housekeeping.”

Laikmaa’s fury is understandable. Several of his students had been killed during the previous few months in the War of Independence, and he had considered these students to be a crucial addition to the still modest number of Estonian artists. One of those killed was Herbert Lukk. Although every death in war is unexpected, Lukk’s was even more so. He was not one of the inexperienced schoolboys, full of enthusiasm and national ideals who had rushed into battle. He was a professional soldier, having served for years in the Russian army, in charge of elaborate machine guns. A few months before going to war, his good friend the artist August Jansen painted his portrait. Although barely 25, Lukk seems strangely grim in the picture, bearded, looking down, serious. No need to believe in omens, but less than two hundred days later the reconnaissance group led by him came under attack by an armoured train. Lukk is the only one who was killed.

Among the artists who arrived in art in the 1910s, attracted attention and died shortly afterwards, Lukk is part of the destruction that accompanies the older art history of Estonia. Besides hundreds of artworks that were lost – in wars, fires, evacuations and bombing raids, from homes, museums, studios and public places – dozens of artists were lost as well. The Estonian ‘art world’ emerged in the 1900s, and there were perhaps only a dozen or so people who established its foundation. They nevertheless quickly managed to create an environment through studio schools, exhibitions and the like, where a number of young talents appeared as a second phase of the process. And then almost all of them died, some of tuberculosis, some of war wounds, and some of a mixture of tuberculosis and hunger. A whole circle of artists gone before they even turned thirty.

It is rather pointless to ask, but I will anyway: what would have happened if death had not intervened? Would Estonian art history have been different?

Although the ‘artists of the second phase’ often developed under the instruction of the first generation modernists (Ants Laikmaa taught most of them), they were by no means inferior imitators. Their handwriting was fresh, different, and raced in new directions. It was somehow more refined, more intertextual, international, critical and conceptual. Herbert Lukk’s contribution would perhaps have been the most unexpected. Compared with other young artists, he was very clearly a painter. The history of Estonian art is mainly the history of painting. From the early 20th century until the early 1960s, with after-effects reaching into the early 1980s, Estonian painting was colour-focused, aspiring towards harmony and wholeness of composition, romantic, work-consuming, perpetuating motifs of nature and emphasising the sensitivity of impressionist subjects to the surrounding world. Lukk was different, and if he had had a chance to influence the local art history more strongly, maybe we would have had an additional stream here, or perhaps the entire mainstream would have been different.

This dramatic introduction to Herbert Lukk is almost the only way to talk about him as a human person, because we know next to nothing about him. We have no idea why Lukk painted as he painted. He was born in 1892, the son of a country parish clerk, and was introduced to art at the age of 18, when two artists decided to make some money as his father’s assistants: Jansen and Anton Starkopf. Lukk had had no contact with art before, but he quickly developed a taste for it and they produced art together, associated with cultural circles, and even performed plays for fun in the more intimate home milieu (under Jansen’s guidance, Lukk for example played Kalev, the father of the Estonian ancient hero). Art contacts became closer through family ties: Lukk married Starkopf’s sister.

In autumn 1911 the trio parted. Starkopf travelled to Munich to study, Jansen to St Petersburg, and Lukk went to Helsinki, where he studied painting for four years, but we know nothing about this period. We know almost nothing about him in general, just a few fragments of recollections, and a brief officer’s file in the archive. In the file, his biography fits on one A4 page. We learn that in October 1915 Lukk was conscripted into the Russian army and served in St Petersburg, Narva, Riga and Paide. He was allowed to carry a Brauning gun and requisition grain. There is no other information.

It is curious that while on active service Lukk exhibited his work. It is not known how he managed to combine a machine gun with a brush. The even bigger mystery is what made him paint and why he painted the way he did.

In March 1918 Lukk was discharged from the army. In the following eight months, Lukk earned his place in Estonian art history: he worked, painted and took part in exhibitions. The exhibitions were different than they are today. Instead of fetishizing an individual work, the walls were covered with pictures like wallpaper. One exhibition might well consist of several hundred paintings, but Lukk’s pictures stood out. Reviews appeared about them. Critics babbled about ‘lush brush-strokes’ and ‘seeking sunshine’. From today’s perspective, it is quite clear that there was something in Lukk’s art that was totally different.

Okay, maybe not ‘totally different’. Emphasising radical differences is, after all, one of the most banal methods of art marketing. Lukk was the child of his time, but not really a child of his environment. At a time when other Estonian artists mixed colours and painted ‘fascinating’ under-brush, Lukk also focused on colour, but his approach was far more conceptual. Instead of nature, he focussed on towns, instead of interesting angles his were banal, and his colours do not mix according to the emotional state of the subject at the moment, but try to capture something objective. Geometrical rhythms do not reveal the artist’s inner being, but instead resemble colour spot poetry à la Damien Hirst: the focus is firmly on colour itself, autonomous and independent, objective and real. Colour is here as matter, as an object, and not as spiritual expression. A cool, almost conceptual approach to art, and a romantic, almost heroic biography: Herbert Lukk’s place in Estonian art history was shaped by the integrating points of such contrasts.

Herbert Lukk (1892–1919), Estonian painter, cultivated Jugendstil and neo-impressionist art. Was killed in the Estonian War of Independence near Narva.