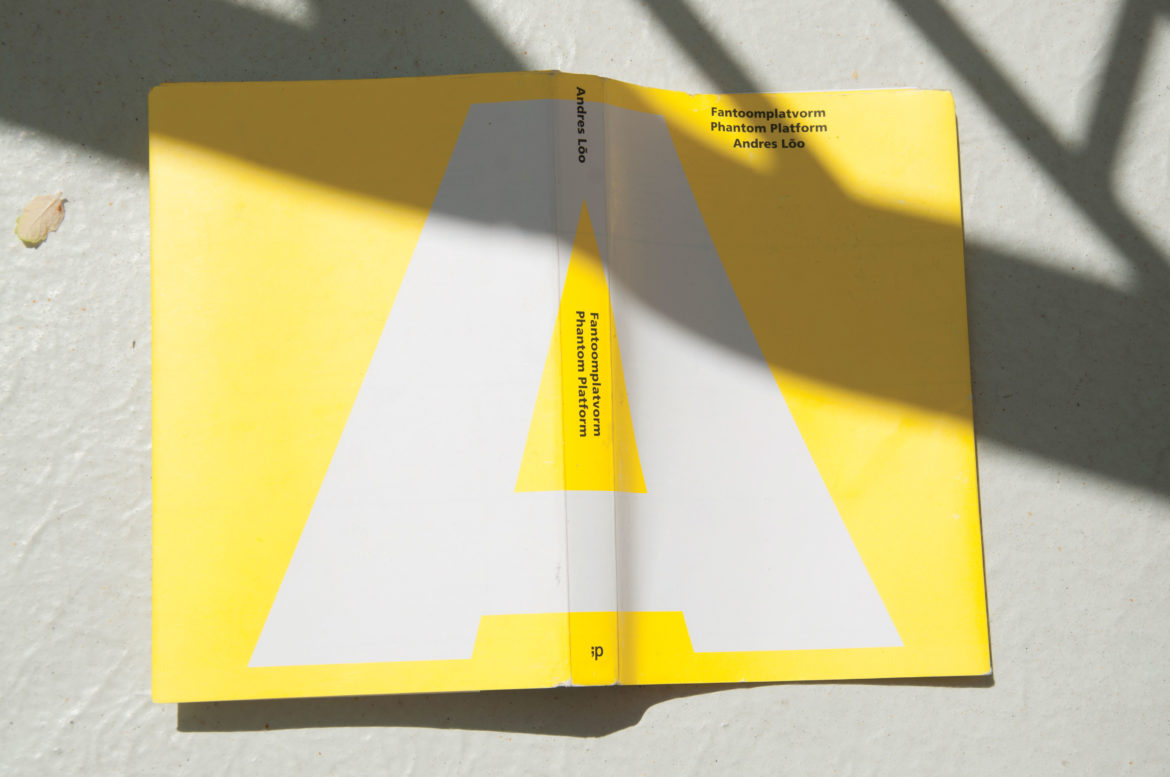 Phantom Platform: The Art of Heresy and Solution

There has to be a way to imagine a suitable, necessary and household sci-fi future, in which the today is already tomorrow. If we do not know what we are looking for, but know what the attributes of it are, then in order to pursue it we need to use imagination. A phantom platform.[1]

In my artist’s book Phantom Platform, I talked about phantom platforms as a conceptual tool, a way to get out of creative blocks. When fear is given a name, one overcomes it – it can be used to escape any ‘impossible’ situation. It’s a decision, a meta-land, a place where going forward is possible and laden with meaning. I speak of the phantom platform in the context of art and creativity because what the world needs today is the sensitivity and skillsets of its artists and scientists. In art, a paradigm shift has to be brought forward artificially – not letting it lay in the idle hands of those longing to keep the status quo in the art world. This opportunity to undertake needs to be seized.

The role of artists has to be re-conceptualized. In light of global developments taking place today, redefining the role of artists is not just a possibility but a necessity. If not intellectuals, scientists and artists, who else should conceptualize, describe and convey to the general public about the state we’re in and what to do in that situation? Leaving aside the logic of conquest, let’s not look so keenly to the future; let’s do it now and today. Now. Today.[2]

A phantom platform is a solution. A decision that there is a solution. The concept of the Anthropocene, floated out by Paul J. Crutzen, is today widely known and threateningly rich in meaning, but unfortunately the Anthropocene is also a story with a bad ending: a negative narrative. We also need a positive agenda, not just a threatening agenda of repentance in sackcloth and ashes. That is why we need the phantom platform as a positively charged state of not knowing: a statement of good will.

If we look slightly past the social metaphysics of Nicolas Bourriaud’s relational aesthetics, contemporary political and social art is mostly merely problematizing. It points to a problem much like the media does, but it does not manage to go beyond; it only points out the problem. For journalists, this is natural, because it is a journalist’s job to report, but in the art context it is equated with whining and complaining. I see contemporary art and anything resembling it as an opportunity for the rise of a new cognitive and cognizant platform that does not just problematize and worry but also tackles solutions. Art galleries (in its most  general meaning) have to become agents for displaying and developing ideas and possible solutions. Of course, research-based art already does just that, to some extent, but still quite far from canonical status. The art space is not predominant, and does not hold power. Not to mention the commercial fine art industry, which is more of a sophisticated by-product of the glamorous and ever larger lifestyle industry. Political art is just a feeble grousing, except for perhaps modern theatre and film, although they, too, are not much fresher than modernized versions of Shakespeare’s plays.

The Russian filmmaker Andrei Tarkovsky believed the role of the artist was to convey harmony that was otherwise not to be found in our imperfect lives. Isn’t the artist’s work to reveal – in the language of art – the truth and possibilities of truth in everything that people haven’t conceived of or are not able to conceive of?

This is an egalitarian perspective on art. Not individualistic; it is not that which the documentary film maker Adam Curtis criticizes contemporary artists for. Curtis rails against the self-expressive urge, saying it should not be the primary creative impetus.  Curtis is correct in that the radical individualism of the disciples of Ayn Rand and the likes shouldn’t be the catalyst for the creative being of the artist. Nor should the catalyst be the mercantilist cynicism that is embodied by Damien Hirst or, respectively, by two artists of the same line from preceding generations, Jeff Koons and Andy Warhol. Of course, we can argue about what truth is, and it can also be disputed whose truth is truer and that everything is relative after postmodernism,  etc. But isn’t it the whole point to discuss and seek the truth. If we were to bring scientists into the game, perhaps there would be a little more of that truth…. We are striving for it. The meta that we need as our everyday bread is the truth that can’t really be spoken of but which it is not possible to be silent about.

Art as we know it is over. Art isn’t doing what it should be doing. Contemporary art is blind and powerless. I’m not talking about commercialized aestheticized scientific achievements. I’m not talking about scientific propaganda. I am talking about a symbiosis of science and art. A symbiosis of functional, scientifically and empirically proved sublime detail and art’s power to shift the frame and open up the abstract. Alongside spaces that we still frequent today to view contemporary art, new spaces should be created which serve as joint platforms for the cognitive and the scientific: an art-science collider. These should become the phantom platforms of our immediate future.

Today, when untruths are all too available and trustworthy information is becoming subsumed in lies, we should deal with integrating science and art in art-and-science centres in which we try to convey our work and true, substantiated truth, facts and the “marvellous real” to people in undistorted form. In a manner that connects people, and not just people to people but also people to nature.

The symbiosis of art and science is a marvellous real, metaphysical wonder based on hard, physical facts. In the absence of a better expression, I’ll call it the ‘marvellous real’, but I’d like it not to be associated with magical or marvellous realism. Delving into the functioning and outcome of the natural forces prevailing in the universe is quite an amazing experience on its own. Understanding how plants and animals communicate with each other, how we act in this environment and where we are situated is all pretty amazing. It is more marvellous than the core objects of wishful thinking, especially the icons of monotheistic religions. The marvellousness that contemporary art as we have known it for the last 150 years and science have made available to us is valuable potential that begs to be used. Who will protect people from creeping corporate enslavement? Who’ll protect us from corporate monocultures? How can we make decisions on industrial food production? We don’t have a say in the quality and effects of GMO foods because that is decided by corporate private capital and the same is true for energy generation. The symbiosis of the artist and scientist – in my book I use the somewhat cumbersome term ‘visionary in practice’ – is the guarantor of marvellousness.

Today’s artists should not deal primarily with self-expression but with harmonization and smoothing the imperfections and injustices of society, shaping and designing justice and human dignity. They should do this together with scientists. Artists and scientists with similar sensitivities and a passion for in-depth work should create a new platform that seizes the reins when it comes to solving problems and communicating solutions. It has long been known that the robotization of industries and transport will mean such a lowered need for workers that entire economies could be brought to their knees. Increasing the sustainability of energy production and the growing use of renewables, coupled with the advent of new energy storage technologies, will soon and decisively create the cross-dependencies of human institutions. New cities will arise where the world economy’s power vectors intersect. Dealing with matters of such gigantic importance and vivifying the near future could be a priority in the collaborative work between artists and scientists. In this manner, science would be given a conscience and art would grow a spine. Combined, this is real power.

Such an initiative exists to a certain extent at the Arts at CERN residency programme (COLLIDE Artists Residency Award), Art&Science@ESA (European Space Agency), and the initiatives to aestheticize science at the Camargo Foundation Program and NASA, but a third platform should be created alongside science centres and art galleries. The science-and-art centres should make it their goal to convey scientific achievements to people in ways that speak to them and give life new meaning that enriches it intellectually. Solutions, whether related to food production, energy or IT, should be conveyed to people in language that is at once comprehensible and eye-opening.

We should start with education. This is the training ground for new generations, and its principles were articulated by the first generation of scientists in the Space Age and the first hippie generation. Through education and by establishing art-and-science centres that have as much autonomy as possible, scientists and artists can preserve, develop and save the world. This is a paradigm shift. This is a phantom platform.

____
“Generally speaking, communicated information should be substantial. The business world and its advisors have realized this too. […] As soon as information is viewed as capital, no one wants to communicate anything relevant anymore. We need to get back to good old-fashioned conversations where people trust each other, share their thoughts and play with ideas. Only then can things lead anywhere – slowly building confidence in the outside world and not attributing importance to every single idea.” [3] – Daniel Pflumm

Andres Lõo (b. 1978) is an interdisciplinary artist and composer.