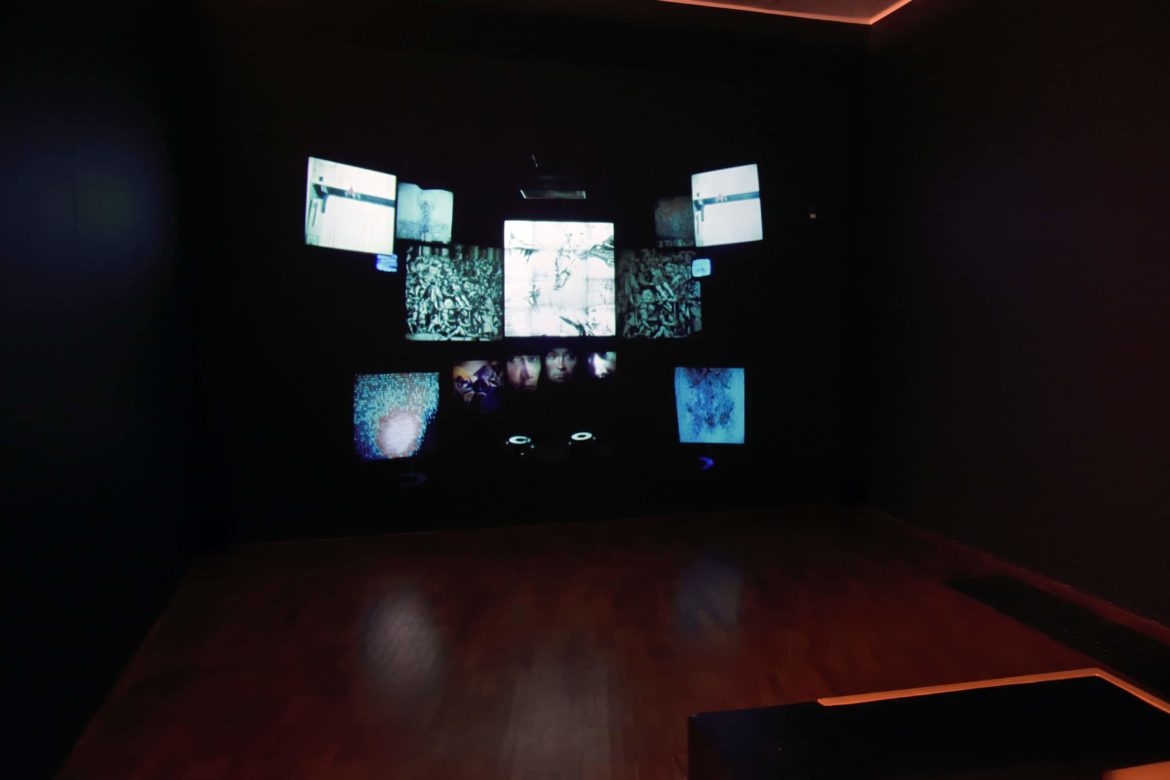 To write ten thousand characters on Yuri Sobolev is a daunting task and forces one into a choice: to list his life’s events or describe everything of significance in the context of the exhibition “The Archaeology of the Screen. The Estonian Example”. For an international audience, it is probably more interesting to get an overview of the branch of the Soviet art scene which dealt with the development of visual culture.

Yuri Nolev-Sobolev was an artist from Moscow who studied at the Moscow Polygraphic Institute. In 1956 in Moscow, he met the Estonian artist Ülo Sooster (1924–1970), who had been repressed and recently released from a prison camp[1], and so had no right to live in any big towns in Estonia. Sooster moved to Moscow, and with Sobolev’s help he found work as a book illustrator. Sooster encouraged Sobolev to see himself as an artist and to free his artistic spirit. In 1957, the two men started their famous project of mapping the ‘empty spaces’ in the history of art in accordance with the aspirations of the post-Stalinist era. During the exploration of empty spaces, both men centred their individual artistic platforms around Mannerism, metaphysical art and Surrealism. Sooster became the central figure in a circle of artists with Surrealist interests. Sobolev and Sooster were also among the artists berated by Khrushchev at the Moscow Manege for their avant-gardist extravagance; in the Soviet Union, this episode marked the end of the Thaw and the beginning of the stagnation. For Sooster, this meeting was a serious blow because, as a result, he was not accepted into the Artists’ Association of the USSR.

Sobolev was not employed as an artist but he kept working on prints on his own. In 1960, Sobolev became the chief artist of the publishing house “Znaniye” (Knowledge) and from 1964 to 1980 he also worked as the chief artist for the scientific publication “Znaniye i Sila”. In all of his publications, Sobolev employed future stars of Russian art: Ülo Sooster, Ilya Kabakov, Viktor Pivovarov and many others.

Together with Sooster, Sobolev dealt with mythological archetypes and opportunities to exploit them in his imagery. From non-formal artists, Sobolev expected new viewpoints and ideas that would help open up the irrational side of science outside of conventional logic. Andres Kurg has written about “Znaniye i Sila” that, in its own Soviet way, the magazine covered changes in the understanding of the environment: the textual level carried the subtext of the scientific and technological revolution, which was predetermined and censored by the official ideology; the illustrative material, which was copiously used in the publication, reflected the quest for an alternative language, describing technical effects with the subtext of surrealism or irrationalism in order to allude to the changes in the human being’s inner cosmos.[2]

After Sooster passed away in 1970, his role as Sobolev’s intelligent Estonian friend with modern ideas about art and a shared view of the world was taken on by Sooster’s young friend Tõnis Vint (b. 1942), an Estonian printmaker, art innovator, and student and practitioner of Oriental transcendental mysticism. The two men’s spiritual dialogue and cooperation peaked in the 1970s and 1980s.

Sobolev’s own path of life, in which contacts with visual culture assumed an increasingly important role, making his career rather atypical for a Soviet artist, took a significant turn in 1974, when Yuri Sobolev joined a team working on the first Russian polyscreen. It is a fascinating story, and began for Sobolev at the American National Exhibition in Moscow in 1959, where a domed building designed by Buckminster Fuller was used to display thousands of images on the lifestyle and work environment of the American middle class on seven screens. The images were compiled for the exhibition by Charles and Ray Eames.[3]

The world premiere of the polyscreen had taken place a year earlier at the Brussels World’s Fair in 1958 in the pavilions of Czechoslovakia (which became known as Laterna Magica) and the Netherlands. Russia turned to this effective method of presentation in connection with the 1975 Congress of the International Council of Societies of Industrial Design (ICSID) in Moscow. Sobolev’s previous experience with animation was the main reason he was chosen for the project[4].

In the preparatory project for the polyscreen, Sobolev was employed as the artistic director and, together with the project manager Yuri Rechetnikov, they developed a projection field of screens with a large central screen for the intermittent projection of films and slides, while the screen areas on the sides were somewhat smaller[5]. A huge number of slides were to be shown on dozens of Kodak Carousel slide projectors. The Congress, however, opened without the prepared polyscreen “ICSID”, named after the Congress itself. After the preparatory work in Moscow was covered by the Voice of America radio station, the project was criticised as ideologically tainted because it sowed pessimism and did not do justice, in the eyes of the rest of the world, to the Soviet Union’s possibilities of the creation of an ideally harmonious world. To approve the project, there was only one ICSID review, and based on its materials, together with Yuri Rechetnikov’s original soundtrack, ICSID 2012 was restored on the initiative of Andres Kurg, an Estonian designer and architectural historian[6]. The duo of Sobolev and Rechetnikov later constructed a number of polyscreens, which were commissioned by museums and memorials.

The next area that played a major role in Sobolev’s life was theatre, where he became one of the most unique designers with an audio-visual bent. In 1980, Sobolev joined the experimental Theatre of People, Objects and Puppets in Tjumen, Siberia (headed by Mikhail Khusid) and took part in the staging of Tagore’s play The Post Office in 1981. Khusid was not satisfied with the traditional puppet theatre, so he changed the context and focussed on the liberation of the actors and plays. Similarly to a number of Estonian theatres in the 1960s and 70s, Khusid and Sobolev followed the footsteps of the Polish theatre reformer Jerzy Grotowski (1933–1999). Without negating the creative accomplishments of the theatre, the director’s innovative platform caused difficulties that gave rise to many discussions of Khusid’s experiment. The actors who had been taught in Stanislavski’s system had major problems with a theatre that was based on such a contradictory logic and ignored the rules of staging. The theatre historian Anna Nekrylova characterised Khusid’s and Sobolev’s model as a carnival-type theatre platform, with the prevalent aspect being free self-expression. The artist and director had their own visions of the theme and chose what to use from the script or what to discard. The concept did not necessarily match the storyline; it was an improvisational theatre, with association-based thinking, where actors moved about and interacted with as many types of puppets as possible. This kind of theatre was only understood abroad, after it started to appear in such theatre festivals as the “Festival mondial des théâtres de marionnettes” in France and the street theatre festival in Lugano.[7]

Sobolev spoke Khusid’s language from the very first play and, as the theatre did not use stage settings, his task was to employ technology and slide shows to create a tense poetic imagery for the production. The staging was a score of living impulses, which the directors attempted to translate into a Grotowskian system of signs. In the restless staging, where the sizes of objects and puppets could markedly differ and where there was an inevitable turn to mythological truths and archetypes, Sobolev’s focussed and generalising structures left a powerful impression. In this period, Sobolev was interested in Jung’s work, which he read in German, and based on Jung’s ideas he looked for a visual equivalent to the expression of archetypes. The same problems occupied Tõnis Vint in Estonia; as early as the beginning of the 1970s, he had introduced elements of mandalas into his graphic art. The two friends even shared drama work, as both were asked to provide settings for Tagore’s “The Post Office”.

In the cultural space of the Eastern Bloc countries, the screen served in the 1970s and 80s as a bridge, a window to another reality, both virtual and metaphysical. Tõnis Vint’s studies of the archetypal collective descent were realised in the film-study “Lielvarde Belt. Tõnis Vint’s Hypothesis”[8], in which Vint proposes an analysis method derived from belt ornaments.

In Tagore’s “The Post Office”, Sobolev’s design followed the principle of the polyscreen, projecting mandalas onto the actors, their costumes and the backdrop. This has been viewed as an attempt to highlight everything that came in contact with the mandalas in order to show that there was another reality, the reality of dreams and the past, the reality of ethnic memory.[9] Sobolev stood out from his surroundings due to his focussed interest in archaic cultures, mythologies and local national myths. In the staging of “Don Juan”, Sobolev exploited Tibetan music and images from Irish sagas. The artist remained connected to Khusid’s theatre until the end of 1980, and then started his own studio near St. Petersburg under the name Yuri Sobolev’s School, in which he concentrated on performances that expressed the symbolic dimension of corporality.

The changes in his ideology in the 1980s are reflected in the first reconstruction of “Mandalas”. In 1986, when Sobolev had started to identify himself in a wider sense as a designer of audio-visual culture, he reconstructed the slides that had been preserved from “The Post Office’s” stage setting into a video version, in which the slides with mandalas were made to loop like frames in a film.

The last reconstruction of the reversal film “Mandalas” was made in 2017 for the exhibition “Symmetrical Worlds – Mirrored Symmetries. Ülo Sooster, Yuri Sobolev, Tõnis Vint, Raul Meel” at Kumu Art Museum. The reconstruction was made on the basis of the original colour slides from 1981 and video documentation from 1986 from the archives of the artist’s family. Of the 92 slides in the film, 84 have been preserved. During the reconstruction process, the colours of the slides were not corrected.

Materials for the reconstruction were made available by Galina Metelichenko.

Archaeology of the Screen: The Estonian Example