The seer meets the maker

Excerpt from a talk (15.03.13) between Arne Maasik and the New York architect Giuseppe Provenzano, the curator of Limen, the last photography exhibition of 2012 in Tallinn.

AM: You’ve begun to make a name for yourself in Estonia with new ideas you’ve shared here through articles, interviews and your work. Instead of adding more to that, I think I will go back to something you told me many years ago, when we first met. You said that you liked to be where stuff happened, or things were changing. You’ve lived, worked and taught in many countries across four continents so as to always be at that crossing point where the next train would pass. Now you live in Tallinn. Do you think the next train will pass through here, where do you think it’s going, and have you ever missed a connection?

GP: The way you framed this question is a great way to understand your work. How you frame it, the angles you choose, how far to move in or stand back from your subject so as to offer with your gaze a peek into the world that, despite being your own view, also offers the viewer an accurate view of that same reality. I think this quality is not very common. In my opinion, it encapsulates what distinguishes you and your art in the art world. It is this ability to filter tons of unneeded details, to percolate, and to arrive at this concentrated matter like a cup of superb coffee. 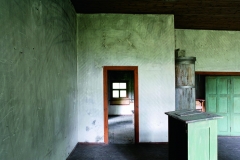 AM: Perhaps, yes, but you did not answer the question.

GP: The first time I came to Estonia, seven years ago, I experienced this as a place teetering on the brink of change. Just a feeling, but I could smell the unmistakable scent only an invigorating promise of the new has. In the past, if I knew about a train coming, I always tried to be there not to miss the connection. I confess this is a moot point though, since a few times I was run over by that train too. However, the important thing is to be there where something is happening and, most of the time, I have been. So yes, it still feels like a train will pass through here. Where it’s going isn’t important. The important thing is not to miss it. Then, if I don’t like where it’s going I can always get off. To a degree, Limen was a little bit like that, wouldn’t you say?

AM: Yes. Limen gave me the feeling that I needed to push my work to pass an important test. Two years ago I discovered this building in the middle of nowhere while working on a different assignment. I instantly knew something had to happen. I went back to visit it many times after that and photographed it in many different light conditions: day, night, summer, winter etc. When Parikaste Maja asked me to do a show, I knew exactly what it would be. The big test was to see how the big leap from my previous work, which Limen represents, would hold. Judging from how well the show was embraced by the local public and the attention it received internationally we passed the test successfully.

GP: To identify successful buildings, two aspects play a key role: light and space. The way natural light enters a building and fills its space, the constant mutations of this light and how it changes our perception of the space. Spaces that work well are designed with these aspects in mind. We cannot fully know what the building in Limen was designed for, but what we can say is that in spite of its simplicity a thorough experience of the light and space qualities in it could only have been achieved with many visits, over a long time span. Limen worked so well because it resulted directly from your cumulative experience. First and foremost, architecture is experience. Historically too, it has been the movement of the body through space that has provided the real dimension of architecture. Spatial perception changes with this movement. This is an extremely important concept that’s impossible to photograph. Making this statement while talking about a photography exhibition is a paradox. However, Limen also worked because it represented a threshold. Each photograph is, in fact, a threshold. The wonderful intuition was to allow the threshold points in the building to find the camera. Only then this most impossible of tasks could return such an authentic experience of this building. This becomes apparent once you start to move in the gallery space. It’s rather surreal how the space of that ancient building far away can be felt by moving through the gallery’s halls. It’s a major achievement. Many visitors to the show, in fact, initially thought the photographs represented the very space in which they stood, the gallery space. Remarkable.

AM: Exactly. These aspects are forever present in my work. I grappled with the hierarchy between space, light and materials for a long time in the early years of my professional life as an architect. As a photographer, though, I was able to free myself of all superimposed structures. I can now work with those aspects more freely. Space stimulates imagination. It contains light. You can play with light in space however you please, with the help of materials that are around and the ways they react to light. This is easy to understand for natural light, but it’s the same for artificial light. I’ve always been fascinated by how the quality of light can dramatically change how we perceive the space that contains it. I find the works of architecture of the undergrounds in New York and Moscow to be impressive, or such libraries as the Staatsbibliothek in Berlin.

AM: You are spot on and, yes, the reaction of those who saw Limen at the inauguration was truly memorable. You reminded me of something I once heard Peter Eisenman say. He was talking about a lesson he got from his teacher, the great Colin Rowe. They were in Italy to see the works of Serlio, Vignola and Palladio. As they stood by the buildings, Rowe asked him to say what he saw and, most importantly, what he didn’t see. Eisenman says that’s how he learnt that architects see what isn’t there. The importance of those architects lies more in what they did not express architecturally than in what they did. When LIMEN materialised the way it did, I was stunned. To feel so close to the statements it was making was exciting and very humbling.

GP: Jeff Wall talks about a phenomenon of unity in a work, something about how it might be experienced as a unity, even if, when you look at it closely, it may hint at its own contingencies. This moment of experiencing the work’s unity is important. It is always there when we experience good art, even if we’re faced with a work that rejects the idea of unity, as in radical avant-garde art. Thus, the unity of a good work of art is an unavoidable moment of making and experiencing it. I think we have this unity in Limen. But Wall also said that the mere experience of a work of art changes people and their personal way of seeing things. So do you think we have all been changed by the experience of Limen?

AM: Undoubtedly. All art can change people, their minds; at least, it affects the mind. Photography, film, architecture, all art changes us. I’m sure. It’s the story of my life.

Limen is often likened to a thin line where everything is

white on one side and black on the other, with no shades

of grey. The agony of the ‘here and now’ placed against the

dream of the ‘there and then’. It embodies both the promise

to disclose and become manifest, not without a daunting

fear of the unknown. It’s a limbo we are describing or, as

some have called it in the past, a living, infernal nightmare.

Another stare, then, unexpectedly, into the span of an instant

that tends to infinity, and that thin line expands into a new space,

Giuseppe Provenzano, founder of Studio di Composizione (worldwide laboratory and observatory for architecture, art and design) in 1988 in his native New York. Has taught and practiced in the USA, Canada, Europe, Japan and New Zealand, currently working from his Tallinn base.

Arne Maasik's exhibition in the Vittoriano complex in Rome