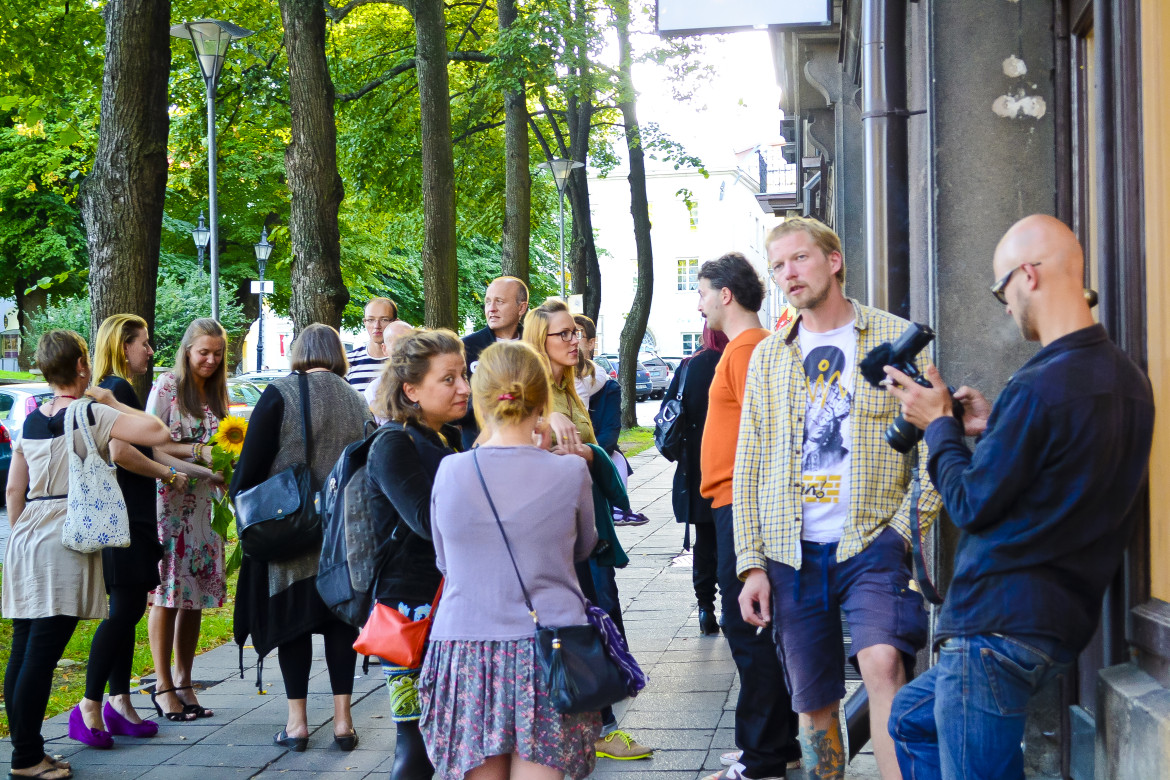 Tallinn as a new art city to watch 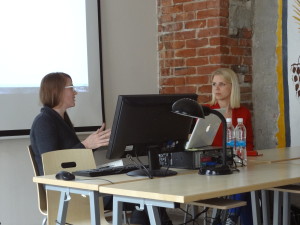 Karin Laansoo in conversation with
Gallerist Tanja Wagner from Berlin. Tallinn, 27 May 2013. Photo by Kadri Laas

The Estonian Contemporary Art Development Center is a small organization with a large vision. We are one of several national platforms working to build a bridge between the local contemporary art world and the international field, with a special emphasis on expanding the contemporary Estonian art market. Two equally important and closely connected areas of our activity are: enhancing the exposure of Estonian contemporary art on the international scene and supporting the international competitiveness of Estonian galleries. Encouraging greater interest in the work of local artists by the international art market is a joint effort involving many participants. Many European countries are in similar situations, from Scotland to Latvia, Lithuania, and Poland. Although Warsaw, for example, has more galleries, collectors, and artists than Tallinn does, the ratio of artists to pieces of art bought by collectors is quite similar in both Warsaw and Tallinn. In general, in countries with not enough private collectors, the lack of a local art market is compensated for by state support of the galleries’ export activities in order to help these galleries join the international art market more quickly.

The long-term vision of ECADC is the existence of an ethical and sustainable art market which, along with state support, finances a significant portion of the production of new art works and encourages the circulation of Estonian contemporary art in the global system of exhibitions and art fairs. This vision is not as unattainable as it might at first seem, but it can only be achieved through the joining of the Estonian art market with the international art market. Making the Estonian gallery scene more professional and providing Estonian contemporary art with an international reputation in the commercial sphere has only just begun. The two significant factors in achieving these goals are increasing the number of Estonian galleries and art professionals that operate internationally and increasing international representation for Estonian artists.

ECADC has been active for two years. How have the initial aims and focuses changed and become more specific?

ECADC’s initial focus has remained largely the same, although its vision has become more precise and specific activities have been initiated to achieve this vision. The initial general focus was on creating a professional umbrella organization that would encourage cooperation among local galleries and institutions and international organisations. After analyzing the needs of our partners, it became clear that the lack of qualified gallerists and art professionals with international experience was an obvious shortcoming to address. In addition, it turned out that a general understanding of the role of a contemporary art gallery and an understanding of the functioning of the art market among gallerists, art professionals, and artists themselves was not always sufficient to successfully operate abroad. Aside from counselling the already-existing galleries and artists’ associations, ECADC organizes master courses for gallerists in cooperation with the Institute of Art History of the Estonian Academy of Arts, which enables us to find the most capable group of young art professionals for practice abroad.

We have consciously avoided any increase in centralization or administration, maintaining only what is needed for the projects. In the current phase of the organization, we must maintain flexibility so that we can quickly react to new needs in terms of both partners and programming.

What are your bigger projects and programs, and what kind of interest groups do they involve? 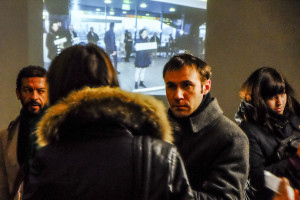 The larger programs ECADC has initiated are mainly intended for local gallerists, students, and artists, and, beginning this year, also art collectors. Among the most significant programs is the already-mentioned master course for gallerists, which is held every two years. Our experience with this course showed us that there is a demand in Estonia for this kind of education, and also that there are capable young people with the necessary language skills and basic art or art history education. In 2013, ECADC followed up on the gallerist master course with an internship program, where five Estonian art professionals worked for six galleries in Glasgow, New York, London, and Berlin. In the long term, it is likely that this group of interns will collaborate with ECADC in working on our international projects.

Five Tallinn Tuesdays took place during 2012-2013, and they attracted a good amount of media attention – something you can never get enough of as a gallery.

Tallinn Tuesday has become a form of collaboration for galleries as well as a platform for introducing Estonian contemporary art to wider audiences.

In terms of international exposure, ECADC has helped to introduce the work of 11 Estonian artists at international art fairs. The awards for Sigrid Viir at the PULSE fair in New York and for Denes Farkas at the Artissima fair in Turin – both in 2012 – were big acknowledgments for the artists as well as the Temnikova & Kasela Gallery. So far, Estonian galleries have been represented at regional, “B-category” fairs. Being accepted into A-category fairs (Frieze London or New York, Art Basel, or Art Basel Miami) is a huge challenge and usually takes a long time to achieve. The juries for these fairs select participating galleries according to the reputations of both the galleries and the artists. Although Frieze New York has stolen some of the hype that the Armory Fair used to have, the forthcoming solo project by Dénes Farkas with the Ani Molnár gallery at the Armory is still an important milestone and a significant event for both the gallery and the artist. From the artist’s point of view, representation by an international gallery or double representation by both an Estonian gallery and an international gallery is an ideal situation, as many people then work in support of the artist’s success.

It is quite clear that working internationally means that one cannot be one-directional. In parallel with creating and finding opportunities for Estonian contemporary artists outside Estonia, we must also offer a chance for artists, curators, and art critics from abroad to work here – constant dialogue always creates more possibilities. In the past two years, ECADC invited six curators and art critics to Estonia as part of the Visiting Curators Program, which was run together with the Centre for Contemporary Art in Estonia. As a result, Estonian artists were able to participate in international exhibitions, and articles about Estonian artists were published in international art journals. All of our guests visited artist studios or met with local artists, and as part of the International Focus series five curators and critics also gave public talks about their work and the art world in their respective cities. 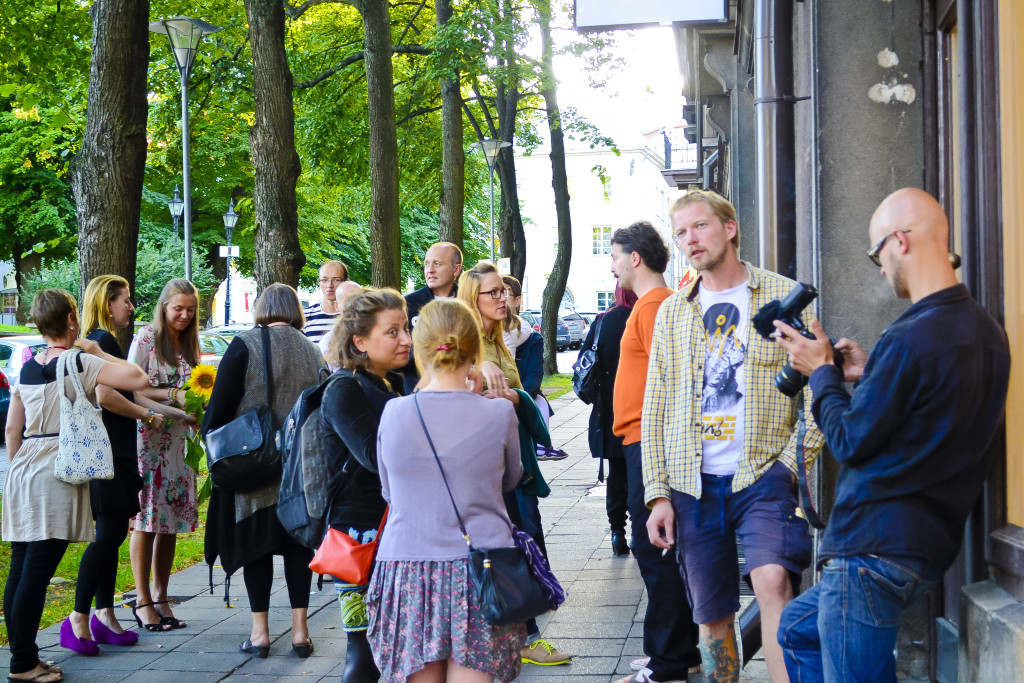 In terms of ECADC geography, what countries have been involved so far?

Mainly European and North American countries. We have focused our activities on certain countries that we selected based on already-existing contacts and international and regional art fairs. Our grasp will widen in the coming years as we prepare to find new institutional partners in Asian and Latin American countries.

As far as work inside and outside Estonia goes, have points of contact emerged, and how?

There are many points of contact, and we are working towards creating even more. At our first gallerist master course for example, the lecturers (all gallerists who were visiting Estonia for the first time) had a chance to personally meet our gallery internship candidates. When we suggested this, the international gallerists happily agreed to choose the right candidates for internships in their galleries. Also, visits by foreign curators and critics usually result in either exhibition projects or in an article being written about at least one Estonian artist. This is the natural give and take that the inherently social art world is relies upon – the more you give the more you receive back. Each time an Estonian artist is acknowledged it naturally results in more attention to all artists from the same country. Last year, for example, Katja Novitskova was nominated by the journal ArtReview as a “Future Great,” Katrin Koskaru received the Valerie Beston award, and Tallinn was recognized as “a new art city to watch” by the publishing house Phaidon. After her visit to Tallinn, British curator Ellen Mara de Wachter’s article on the Frieze blog evoked interest by other curators, who then immediately asked “Is there something else interesting in Estonia I should know about? What works by which artists can I find there for my next projects?”

Who do you cooperate with?

Our local partners are the Temnikova & Kasela, Vaal, TAM, and Okapi galleries, Rundum Project Space, FOKU, the Centre for Contemporary Art, and the Institute of Art History at the Academy of Arts. International partners include United Photo Industries (New York), the Elysée Museum (Lausanne), and Artprojx (London). In 2014 projects are underway with all three organizations: United Photo Industries will organize an exhibition for the winner of the Arprint Young Photographer competition, together with Artprojx we are planning the Estonian Video Artists’ Film Club during New York Frieze, and our collaboration with Elysée Museum includes introducing Estonian artists in their summer project “La Nuit des Images.”

What have been the key events in your work?

Probably the various accolades to Estonian artists – for example the above-mentioned awards to Sigrid Viir and Denes Farkas at international art fairs. Equally important projects last year were the debuts of two young art professionals: Anna Laarits presented her graduation project in the context of the de Appel Gallery Programme at the Liste art fair, and Mihkel Ilus worked with the Glasgow Gallery Kendall Koppe at the same fair. Merike Estna had her solo debut at the Winkleman Gallery in New York, and the publishing house Lugemik took part in the art book fair at MoMA’s PS1 in New York. The year was concluded with Phaidon publishing house’s acknowledgement of Tallinn as a new art city to watch. Additionally, two of the ten artists specially mentioned at the NADA 2013 fair were Estonians: Kris Lemsalu and Merike Estna. We are also excited that Eesti Ekspress selected several young art professionals who participated in our international gallery internship program as “Future Greats” in 2014: Sandra Veinla, who worked for Tom Cole and Hollybush Garden galleries in London, Merilin Talumaa who interned for carlier | gebauer Berlin, and Anna Laarits.

In 2014 we will continue the programs we have already started – programs that are aimed at making Estonian contemporary art more visible in the international arena and aimed at encouraging the development of the local art market and gallery culture. Our programming involves projects with our international partners, with foreign galleries representing Estonian artists, and with Estonian galleries. Together with the Institute of Art History, we are preparing another course for gallerists and art professionals in autumn 2014; with FOKU, we will present the Estonian Photography Fair in autumn, and, with the Centre for Contemporary Art, we will continue the program of visiting curators and the International Focus talk series. In addition, we are starting an art index that tracks contemporary art deals in the Estonian art market. In short, our goal is to help build a system in which galleries can support artists instead of the artists needing to support themselves, a local art market that is artist-centric instead of artwork-centric, and a new generation of Estonian art collectors who consider contemporary art a natural part of their worldview. Most of these projects do not need money, but instead a strong vision and people who can make that vision happen.  Although Estonians sometimes like to think they only have a small influence globally, in terms of culture we really can be exactly as big of a tour de force as we want to be.

Kadri Laas studied art history at the Estonian Academy of Arts and law at Tartu University (received her MA there in 2011). Project Manager at the Estonian Contemporary Art Development Center.