The Rode altarpiece in close-up project

Rode altarpiece in close-up. History, technical investigation and conservation of the retable of the high altar of the St Nicholas Church. Art Museum of Estonia, Niguliste Museum, 2013–2016. 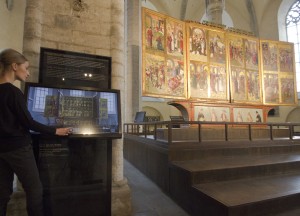 The project coordinator Hilkka Hiiop introduces the touchscreen set up in the Niguliste Museum, which enables to study the altar’s iconography.

In autumn 2013 the Art Museum of Estonia started an extensive project, focusing on investigating and conserving the retable of the high altar of St Nicholas Church. The altar is among the grandest and best preserved late medieval artworks in Europe, and was completed in 1481 in the workshop of the prominent Lübeck master Hermen Rode. In size, it is one of the biggest from the 15th century Hanseatic towns: the width of the open altar is over 6 m and the height over 3.5 m. The double-winged retable has painted outer wings and more than 40 polychrome sculptures in the interior.

The altar is normally displayed in half-open position and is fully revealed in the most festive, third view only three times a year, on St Nicholas’ Days (6 December and 9 May) and on All Saints’ Day (1 November). For visitors who wish to open and close various views of the altarpiece on their own, the first stage of the project in St Nicholas Museum set up a touchscreen, where modern interactive means enable anyone to enjoy the complex artwork and stories about the saints. 1

Clean up the saints

The altar was restored in 1975–1992 by experts from the Moscow Research Institute of Restoration under the supervision of Russian conservator Nikolai Bregman. During this period, the painted wings of the retable were cleaned, as were partially the interior décor and sculptures. However, the artwork has still not been fully conserved by today, as the political change disrupted the works. The general outlook of the retable is uneven, and sculptures covered with darkened varnish and overpaint sit like dull disruptions among glittering figures of cleaned saints. The aim of the conservation project, started in 2013, is to finalize the interrupted conservation works of the the most festive view of the altar. The further conservation methodology depends on various complex issues. The restoration of the 1970s based on the application of chemicals which have been later declared carcinogenic. As a contemporary alternative, the aggressive solvents have been replaced by less harmful ones. To intensify their impact, solvent-based gels are employed whereby stronger contact with the surface is achieved but the solvent cannot penetrate into the original layers. Thus the unwanted effect of the solvent on the interior structure of the object is eliminated, and the desired effect of intensified impact on the secondary layers on the surface is achieved. The method is economical in terms of both the conserved object and the conservator, and has proven effective in complicated three-dimensional structure of the Rode altar.

Even though the work process is quite time consuming and demands great precision, the altar’s original colour underneath the later layers has survived remarkably well. Revealing it fully not only means conserving its material and physical form, but also recreating viewers’ emotional experience.

Between the layers by means of natural sciences

Besides conservation work in Niguliste museum under the eyes of the visitors, the altar is undergoing large-scale technical investigations of the materials and techniques used in producing the altarpiece. These aim to place the artwork in a wider art historical context: stylistically, the altar was supposedly made in Rode’s workshop, but the authorship has not been confirmed either by signature or any document. Comparative researches with other works by Rode’s workshop will hopefully confirm this attribution and help to better reveal the creative practices of this prominent Lübeck workshop. Research carried out by Estonian scientists in October 2014 on the only altar signed by Hermen Rode, situated in Lübeck and known as St Luke’s retable,2 yielded fascinating starting information for a broader analysis of the technical means and character of Rode’s workshop.

Besides investigating the altar itself, a significant aim of the Rode project is to map, test and develop the capacity and resources of technical art research in Estonia.

Research inside and outside the subject field

The Rode altar research is carried out in collaboration not only with the expected institutions involved in art research (e.g the conservation and digitalisation centre of the Open-Air Museum Kanut, the Department of Heritage and Conservation of the Estonian Academy of Arts, and the Chair of Analytical Chemistry at the University of Tartu), but also seemingly irrelevant institutions. The instruments used in art research are often not primarily aimed at analyzing artworks, and therefore it is reasonable to take a look further from the specific field itself. An example here could be the x-raying of the altarpiece carried out in cooperation with the Estonian Tax and Customs Board. As the most institutions dealing with art investigations in Estonia do not have x-ray instruments, the artworks are usually x-rayed in hospitals. Transporting the monumental altarpiece was, however, quite impossible. Thus a portable x-ray machine used by the Tax and Customs Board at Estonian borders came in handy in our research.

Another example of cooperation outside the art field is with the Estonian Environmental Research Centre. The joint undertaking determined the chemical elements used in creating the artwork by the X-ray fluorescence (XRF) method. This is a portable instrument which detects the  elemental composition of each particular area of the artwork. The instrument is primarily effective for consumer protection: it determines the presence of such harmful metals as lead and mercury in, for example, toys or electronic products. The aim of art investigation, however, is not to find out the harmfulness but the existence of the elements and to discover whether gold is really gold, whether dirt is hiding blue or green pigments, which sculptures were later painted over and whether the white colour is chalk or perhaps white lead pigment. 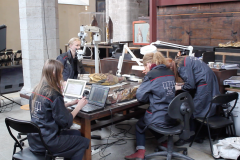 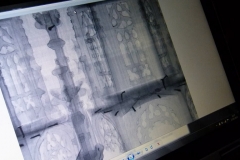 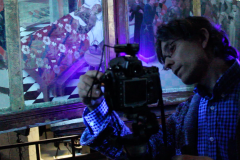 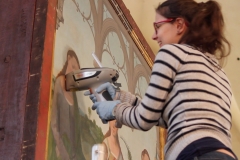 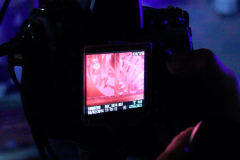 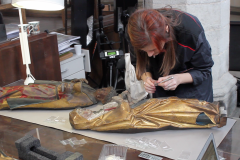 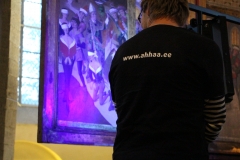 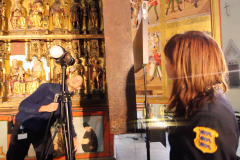 Besides natural sciences, the Rode project is launching wide-range innovative imaging and information technologies in the area of cultural heritage. This has an input to the investigation activities, e.g multispectral and raking-light photography are revealing those aspects of objects that ordinary observation does not. Different wavelengths (e.g infrared) of electromagnetic radiation have revealed the hidden world under the paint layer, which offers excitement, humour and different interpretations, as well as comparisons with other works produced in Rode’s workshop. Modern information technology also enables to contextualise, visualise and archive the extensive analytical data and to use it both for interpretation and for, communication the results of scientific information. A prototype of the altar’s 3D model has been developed, where two- and three-dimensional information can be stored and presented for the broader audience.

The Rode altar as a teaching resource: chemistry can also be studied at an art museum!

A significant part of the project is educational work. Didactic programmes for different age and target groups that combine humanitarian and natural sciences and introduce the heritage from new angles have been developed.

Gymnasium pupils can study organic and inorganic chemistry within the usual school curricula by means of the technical investigation used on the Rode altar. This will help children to better understand the links of chemistry and physics with everyday life and is certainly more enjoyable than the usual chemistry lesson packed full of formulas and numbers in a classroom.

Information connected with the Rode project is conveyed to the wider public via various media, such as film clips, multimedial means and a blog describing the everyday work of the conservators-researchers. All this is accessible in the Niguliste Museum, as well as on the museum homepage: www.nigulistemuuseum.ee

Hedi Kard (1969) works as a conservator of polychrome wood in the Art Museum of Estonia. She studied history at the University of Tartu and had further training in conservation in Sweden and Germany. She is currently studying in the doctoral programme at the Estonian Academy of Arts.