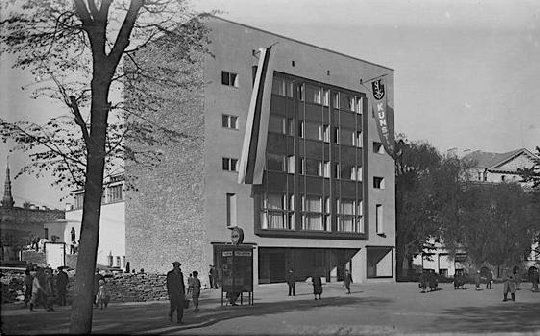 The Tallinn Art Hall was built on the initiative of Estonian artists in the 1930s. The joint effort of Anton Soans and Edgar Johan Kuusik is one of the masterpieces of Estonian functionalist architecture. The exhibition hall, the most imposing in Estonia even today, was opened on 15 September 1934.

Since then, the Art Hall has been the centre of Estonian art life, and remains so to this day. During the Soviet occupation, the Art Hall’ s architecture was an embodiment of the idea of the coveted, but forbidden modern architecture. Many of the exhibitions held there played an important role in maintaining our national identity, despite the fact that everything happened within the framework of official Soviet art policy, directed from the very same building.

Besides exhibition halls and numerous studios, the same building houses today the Estonian Artists’ Association which owns the place; the Experimental Studio of Graphic Art which unites the majority of Estonian graphic artists; the Soros Centre of Contemporary Art in Estonia and several smaller galleries, shops selling all sorts of artists’ materials and, since 1991, a non-profit organisation Tallinna Kunstihoone, the main task of which is organising exhibitions in the halls (550 m2) and in the Gallery (180 m2), and looking after the 6000-piece collection of modern Estonian art. Every year about ten exhibitions take place in the main hall, and 14-15 personal or group exhibitions in the gallery. Approximately 2/3 of these present Estonian and 1/3 foreign art.

In addition to the projects emanating from the current art process, the Art Hall does not neglect retrospectives. Their aim is to research and introduce the 1960-1980, which has not previously been completely documented. One of the largest and most interesting projects in this field was the exhibition Art Axis Tallinn-Moscow, Moscow-Tallinn that finally, after a long period of preparation work, came to be realised in December 1996. The objective of the exhibition was to make public the creative contacts between Russian and Estonian innovative artists from the mid ’50s to the mid ’80s (from the Khrushchev thaw to perestroika). Estonian and Russian avantgarde artists were brought together by Ülo Sooster, a surrealist artist of Estonian origin who after his release from a Siberian concentration camp settled in Moscow. He became one of the leading figures of avantgarde art in the ’60s, whose friends included Juri Sobolev, Ilya Kabakov, Vladimir Jankilevski, Eduard Steinberg, Erik Bulatov and a number of other outstanding personalities in Moscow. His Estonian circle of friends was made up of his former Tartu schoolmates, later of Olav Maran, Tõnis Vint and his followers in the group ANK’64, and even younger and more radical artists like Leonhard Lapin, Raul Meel etc. These artists were united and eager to maintain contacts because of their common oppositional attitude against the Soviet reality and ideology, their fascination with modern art and the general lack of information. The Muscovites were attracted by the western atmosphere still felt in Tallinn, the Tallinners were attracted by metropolitan Moscow’s colourful art life with its marvellous libraries, museums and exhibitions, and the possibility of seeing authentic fragments of the legendary avantgardist artists’ work dating from the first decades of the century.

The extensive exhibition introduced to the public a large number of fascinating works of art from both countries and private collections, recreating an image of the aspirations and stimuli of that period’s unofficial art. The bridge between the contemporary period and history was shaped by the works of three famous artists: Ilya Kabakov’s installation Memories, Vladimir Tarassov’s Concert for Flies, No3 and Vladimir Jankilevski’s graphic drawings. In a trilingual 370-page catalogue, Estonian and Russian art scholars and artists describe the contacts between Tallinn and Moscow and their influence on the art process. This publication presented for the first time the documentary photos of Jaan Klõsheiko who played an active part in establishing relations between Russian and Estonian liberal artists.

The other major art event in 1996 also took place in late autumn. The Finnish Museum of Contemporary Art brought to Tallinn an extensive exhibition of their media art collection. This was the Estonian public’s first chance to see the best international media art. Besides such well-known persons as Tony Oursler, Ange Leccia, Garry Hill and others, the viewers could also enjoy the work of Jaan Toomik, the internationally most successful Estonian artist at the moment.

The Tallinn Art Hall boasts a magnificent interior. For its restoration we are indebted to the Swiss artist George Steinmann. In 1992 he started a project called Return to the Room which was realised in late 1994, early 1995. Within the framework of the Swiss unreturnable foreign aid, George Steinmann together with Estonian interior decorator Rein Laur, art historian Liivi Künnapu and the whole Art Hall team, produced a holistic piece of work, as a result of which the Tallinn Art Hall’s exhibition halls were restored. A significant dimension in the project was the network of relations established between people who took part in the process.

This extraordinary enterprise thus gave the Estonian artists an exhibition hall which fills all international requirements; at the same time a piece of art, proceeding from creation philosophy, was produced which is unique in an international context.

The principle idea of the Art Hall’s work is that of keeping a dialogue going with the Estonian art world, supporting creativity and initiative in various fields of art through new exhibitions and art exchange in a time of complicated social changes.