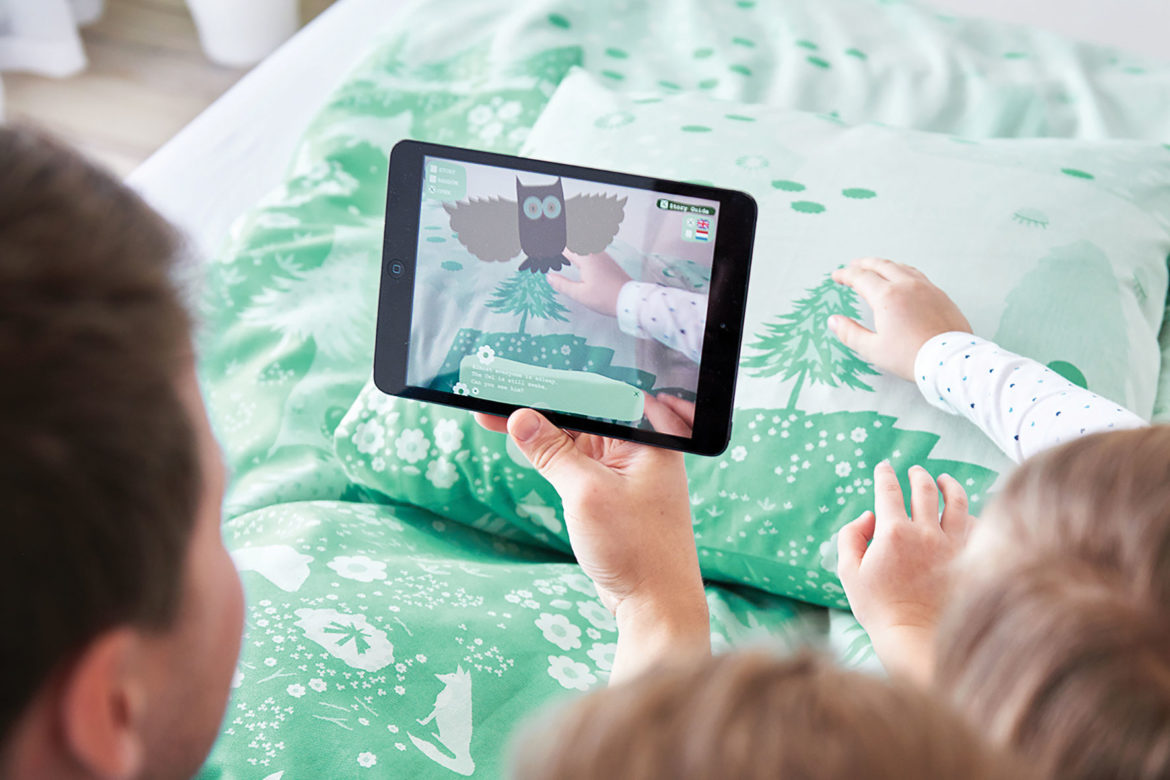 Art and technology in the twenty-first century are no longer segregated, as they were in the past. The increase in artistic activities using computers, the Internet and other areas of technological interest shows the impossibility of understanding the future of the arts without attending to technology. Such activities are apparent in Estonia, as can be seen in creative works by a number of artists and designers who attempt to bridge the physical and virtual worlds. These worlds are where humans have always lived, for example through two of the oldest art forms: storytelling and myth (1). Storytelling helps us understand our environment and personal experience; “[a]ll human beings have an innate need to hear and tell stories and to have a story to live by”(2). According to Benjamin, successful storytelling requires the storyteller’s craftsmanship:

The craftsmanship of storytelling is an aspect present in all of the creative projects discussed in this article. The three projects are: Kärt Ojavee’s and Johanna Ulfsak’s Live Streams (2016), Varvara Guljajeva’s and Mar Canet’s Chameleon (2016), and Kristi Kuusk’s Textales (2015). These projects deal with the creation of interactive screens and tell particular stories about our environment, national identity, and imaginative world, using storytelling as a strategy for connecting physical material and technology with the meaning of the creation. A position shared among these projects’ designers is their aim of making the spectator and/or user understand the surrounding environment and generating personal experience with their work. An artifact that tells a particular story seems to possess a power to captivate and maintain the attention of its viewer and/or user for a long time. The term “interactive screens” in this article refers not only to digital screens such as computers, tablets and mobiles, but also physical screens that are specifically designed and created for particular purposes. The traces of the designers who are the storytellers of the three projects are present in both the physical and the virtual screens.

Screen for Storytelling with Climate Data

Live Streams (Figure 1) is a real-time data-visualizing textile installation created through collaboration between two textile designers: Kärt Ojavee and Johanna Ulfsak. While Ojavee is a smart textiles expert, Ulfsak specializes in weaving. The nine-meter long textile screen imitates the fluidity and behavior of water, a story of waves that exist in the middle of the ocean but become visible and tangible in a gallery space. The textile is hand-woven with optical fibers and a variety of yarns that glow, reflect, and shine. An LED connected to each optical fiber is lit up depending on data on wave height and wind speed received via the Internet. A double-layer structure was used to add volume and three-dimensionality to the screen.

This textile screen tells not only the invisible story of sea waves and wind, but also how the traditional craft of textile weaving is combined with new materials and computer programming. While sea waves and wind are measured offshore, the receptors embedded in the textile screen receive the real-time climate data sent via the Internet and convert them into codes for controlling the emission of LED lights in the textile screen. This is a subtle dialogue between the physical work and the actual waves and wind that is facilitated by new technology, novel materials, and the Internet. The work captures, presents, and responds to natural phenomena through its physicality and interactivity. The physical presence of the textile screen is affected by the visual presence of the data of sea waves hundreds of kilometers away in the form of “rhythmic” light emission. Light and material interactions with the data create, on the textile screen, a luminous effect of sea waves and wind at night, which is changeable in response to weather conditions offshore, whether a storm, a gust of wind sweeping over the ocean, or a calm sea.

The work offers the spectator the experience of a phenomenon that is taking place at a particular moment in a faraway location beyond the physical reach of the spectator. The spectator can observe shifts in offshore weather conditions without being there through the responsive textile screen.

Screen for Storytelling about National Identity

Varvara Guljajeva’s and Mar Canet’s Camaleón (Chameleon) Figure 2 also visualizes data, like Ojavee’s and Ulfsak’s Live Streams, but in this case the data is collected from the spectator’s presence and the topic is the world’s changing national identities. Made of white fabric and embedded with LED light strips, Camaleón is an interactive screen that can become the national flag of any country. The flag screen alternately displays national flags of different countries randomly chosen from a database. It freezes the alteration process when the PIR motion sensor integrated in the top of the flagpole is triggered in response to the spectator’s proximity. The code gathers data from the PIR sensor and activates the LED strips embedded in the flag screen.

The light-emitting flag is intentionally designed to never be fully completed, but to mutate constantly from the flag of one nation to another. The endless transition from one national flag to another blends the colors and shapes of the flags in such a way that none of them is present entirely at once. As the title of the work, Camaleón, suggests, the work shares the idea of the chameleon’s adaptation to its environment by interacting with the spectator and his/her immediate environment.

The flag screen attempts to represent all of the nations on the planet, but ends up becoming an unidentifiable national flag. The aim is to communicate the problematic issues of national identity, the sense of belonging and tolerance in present-day multicultural cosmopolitanism, balanced by extremely polarized nationalism. In other words, the flag screen with constantly changing incomplete national flags can be interpreted as a critique of cosmopolitanism that in fact is illusory. Utilizing the national flag, which symbolizes the identity of a nation, the interactive flag screen tells the story of the contradictory identities of countries in the globalized world, in which people experience the tension between cosmopolitanism and nationalism. The work also somewhat reflects the experience of Varvara Guljajeva and Mar Canet who have developed their careers in many countries by means of artist-in-residence programs, exhibitions, and workshops, and who may question their own identities, nomadism, and the expatriate situation. The use of storytelling as a strategy in the creation of this project brings together a piece of fabric and electronically mutating light illumination to create a symbolic signal digital screen that urges us to reconsider topics related to individuals and their geographical restrictions or capacity to empathize and identify themselves.

Interaction Between Physical and Digital Screens for Telling Tales

Similar to Ojavee’s and Ulfsak’s Live Streams, Kristi Kuusk’s Textales is a project created at the intersection between textile tradition and technological innovation. The project uses jacquard weaving and augmented reality (AR) application to tell a fairy tale through the interaction between an analog, a tactile screen (i.e. bedding or carpet) and a digital one (i.e. a tablet or smartphone). Textales reveals the way in which digital properties can extend a textile product’s capabilities and life expectancy, by allowing the textile to change its functionality from a duvet cover or a pillowcase in the Dream Bear edition (Figure 3) to a woven textile screen for an interactive fairytale. By doing so, the product illuminates a novel idea of what textiles can be and proposes a new way of maintaining the user’s interest in a product.

Textales was created as part of Kuusk’s PhD thesis on craft and sustainability values of smart textiles services, completed at Eindhoven University of Technology (TU/e) in The Netherlands (4). In the creation of Dream Bear, Kuusk took on the role of a service designer who collaborated with multi-disciplinary stakeholders, including a weaving mill (Johan van den Acker Textielfabriek), a virtual reality developer (Unit040) and an illustrator-storyteller (Kerstin Zabransky), who told and illustrated a fairy tale about the adventure of the Dream Bear. With the woven textile screen alone, kids can follow the story narrated by their parents about the sleepy bear wandering around the forest and encountering various supporting characters, such as a star, fish, rabbits, and an owl. The tablet or smartphone AR application when used to scan the textile screen adds an extra layer to the story by generating imagery of these characters and sound effects. In other words, the digital characters of the fairytale come to life on the textile screen with the AR application.

The developed stories demonstrate the use of storytelling as a strategy in the creation of a production in which the AR fairytale application is designed and programed to interact with visual markers, which are the non-animated images woven onto the textile screen. When a visual marker on the woven screen is scanned and recognized by the application on a mobile device, it triggers the application to generate an interactive 3D image on the digital screen. By moving or manipulating the woven screen, the appearing animated image also moves. This allows parents to tell and share stories with their children. The shared tales can be personal experiences subtly woven into the bear narrative, the original Dream Bear adventures, or tales based on the randomly appearing characters of the story. To achieve a variety of ways to tell a story, the AR application has separate settings for the storyline behavior to be on, off, or in a random mode.

In the three creative projects presented above, “storytelling reveals meaning without committing the error of defining it” (5). The artists and designers have selected the stories that they want to convey from their viewpoints. Ojavee and Ulfsak, and Guljajeva and Canet are inspired by information but they do not report it in their works. The works are not considered carriers of information but rather stories of what happens in our environment or society, close to us or faraway. As Walter Benjamin points out: “The value of information does not survive the moment in which it was new. It lives only at that moment…  A story is different. It does not expend itself. It preserves and concentrates its strength and is capable of releasing it even after a long time.” (6) This is what Live Streams and Camaleón do; the stories they convey are based on stories from the lives of the storytellers, in this case the designers and the artists themselves, that survive in the viewer’s mind after a long time. This reveals not the fact of what happened but the expression of it. On the contrary, Kuusk’s Textales is a kind of hybrid storytelling that combines visual augmented reality on a digital screen with the tactile and visual properties of the jacquard woven textile screen. The tales told by the parents through Textales differ from those told in fairy tale books in that the stories are not fixed by any text, but vary depending on the storyteller’s personal experience and imagination in relation to the visuals of the tactile and digital screens. The work allows the storyteller to take “what he tells from experience—his own or, that reported by others. And he in turn makes it the experience of those who are listening to his tale” (7): children in the case of Textales.

Nithikul Nimkulrat (b. 1974) is a Thai textile artist, designer, and researcher currently working as Professor and Head of the Department of Textile Design at the Estonian Academy of Arts.