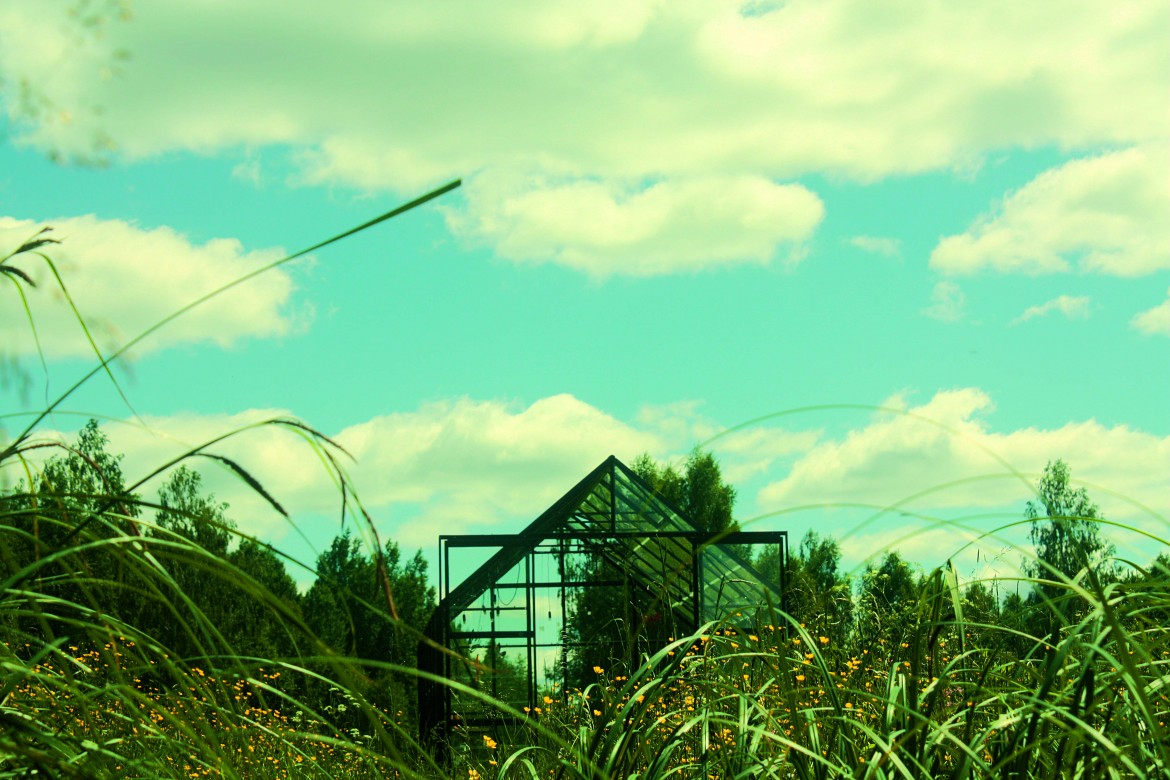 Gram – a roomful of jewellery artists and a travelling greenhouse

The Gram jewellery studio is comprised of ten young jewellery artists who all graduated from the Estonian Academy of Arts: Linda al-Assi, Merle Kasonen, Kristiina Kibe, Lisa Kröber, Marita Lumi, Kärt Maran, Maarja Niinemägi, Ettel Poobus, Birgit Skolimowski and Kertu Tuberg. The studio started working by hiring a joint space in Kadriorg in Tallinn. The artists later moved to a studio space of the Estonian Artists’ Association in Hobusepea Street. The house has historically accommodated many jewellery studios. Working side by side and sharing a budget, a crucial factor gradually appeared that galvanizes existing undertakings: the joint aspirations and effort needed to get things done. Inevitably, some members of the team have left and others have joined, but the eagerness to work grows steadily and mutual cooperation has become essential. The roles are distributed and the presence of others is perceived; it is easier together. The artists organise sales of their work in the oval hall, and take part in design events and exhibitions. The Gram girls have always attracted the public with special thematic solutions. On 15 December 2012, for example, shortly before the world was supposed to come to an end because the Mayan calendar was ending, a huge jewellery sale was arranged, entitled The Shroud Has No Pockets. It suggested people exchange their money for jewellery as the value of money would vanish along with time. 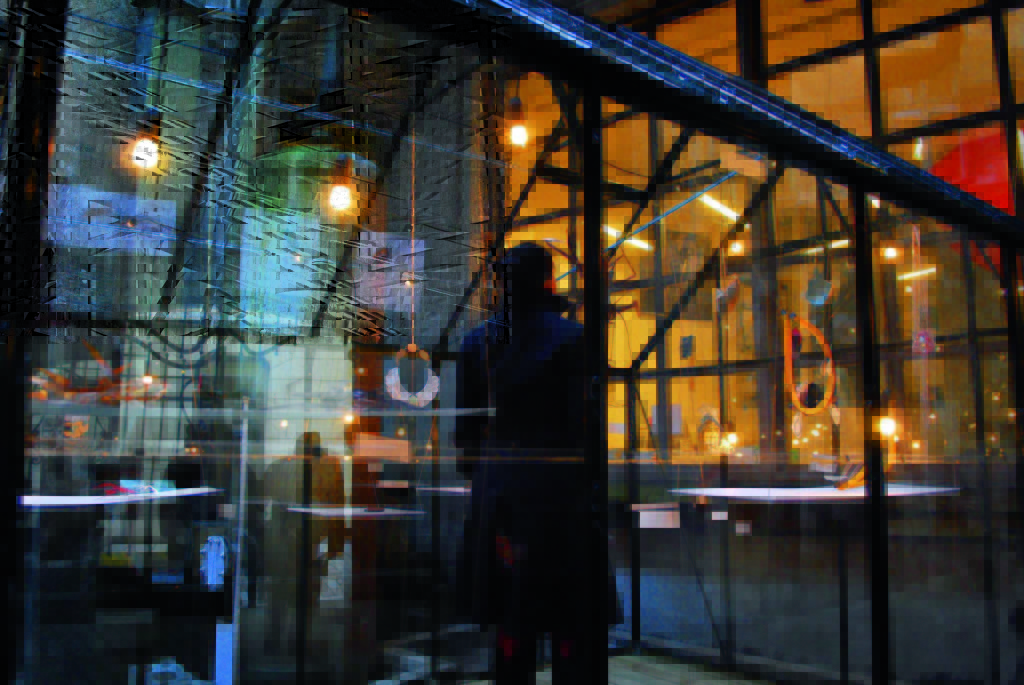 Gram jewellery studio. Around the Corner in the inner courtyard at Hobusepea 2, Tallinn, March 2014.

Last winter another idea began taking shape in the Gram studio. In March, the travelling exhibition of Nordic jewellery From the Coolest Corner arrived at the Estonian Museum of Applied Art and Design. During its opening, a number of satellite events took place in the Tallinn urban space; it was also a weekend of open jewellery art and blacksmiths’ studios. Gram welcomed visitors to the inner courtyard at Hobusepea 2, which presented the exhibition Round the Corner as a contrast to the ‘coolest corner’.

In the crisp Estonian spring, the Gram girls this time worked together with KAMP architects. Together they created an alternative movable exhibition space – a glass greenhouse – in a bleak abandoned courtyard in Old Town. Instead of warmth-loving vegetables, pieces of jewellery ‘grew’ there. The new space was a near-perfect exhibition interior space: at the street level, in an attractive Old Town area, and sheltered from the cold rain by glass walls. Curious visitors were also able to peep beyond the mysterious closed gates. At the same time, the greenhouse as a space offered a sense of security in the damp spring, an intimate place where jewellery and viewers could be together. 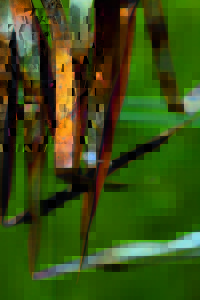 We can certainly draw parallels between local triennial events, the annual March jewellery event Schmuck in Munich and several dozen jewellery exhibitions in the Munich city space in all kinds of official and alternative exhibition venues. On a smaller scale, which of course is more familiar to us, the hullabaloo of the openings of the Nordic triennial and its satellite events in Tallinn was quite exciting, although the weather here is not as inviting and demands an effort to leave home, unlike the warm March in Munich. There was a sense of unity, belonging and triumph in the air. Gram’s display remained open for several weeks.

In early summer the greenhouse was moved to a farm in the national park of Soomaa. Jewellery and various objects created by the Gram artists were again planted there. The exhibition was opened on the day of a concert called Mosquito Buzz (“Sääsepirina alleges kontsert”). The after-party took place at the farm at night. I happened to move over to the party place shortly before the wider masses arrived. The scene was spellbinding: mist, dampness and warmth, a corncrake somewhere nearby, trying to find my way in the dark-greyish-blue nocturnal darkness to the greenhouse. I found the electric cord: the greenhouse lit up! Such simple, abundant and wild beauty cannot be imitated in any other environment. A greenhouse in a park works totally differently than one in urban space. The protective effect of a glass space in town here turned into a blending with nature; the contrast between the close-to-nature jewellery and the environment of the urban greenhouse formed an entirety with the national park. Kristina Kibe’s patinated bulrush-brooches continued acquiring a beautifully toned layer of rust in this ‘glass case’. The greenhouse itself gradually sank into the increasingly taller grass, and bright yellow buttercups squeezed through the floor boards.

All ten Gram studio artists participated in both exhibitions with jewellery specially made for the occasions. The starting point for creating jewellery was the greenhouse as an architectural image, and everything happening inside a greenhouse, and the relevant processes in people’s heads and in the plant world. The jewellery displayed at the Round the Corner exhibitions was produced in the spirit of a greenhouse: the collection was fresh in terms of ideas, inspired by nature and spring. Spring here means new buds and a tender sea of blooms, but also glorifying the beauty of decay and rot appearing from under the melting snow. 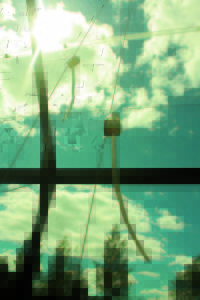 Marita Lumi. Brooches/ pipes/boxes If there’s a hunger, the stomach can hold
a cone. Smoking feet up, even cockroach feels good, so the rats were allowed to go in the world.

Everyone at the exhibition had a tale to tell. Birgit Skolimowski’s neck jewellery Butterflies in the belly, ants on the back, flies in the head superbly express the coexistence of birth and final destruction: the beautiful winged insects, engraved in bone and stone, on dull yellow rubber hosepipes, are like accidental finds from a spring wasteland. Kristina Kibe’s patinated copper and brass brooches imitating the leaves of various plants were this time sharper than ever before. Fear of nature is beautiful: to get stung, needled, nettled or suffocated under weeds. The same kind of painful beauty is expressed by Ettel Poobus’s needle-leaf necklace. People normally want to root out weeds, maybe even kill them off with pesticides, at the same time destroying the bees, despite the fact that none of us has ever seen an ugly dandelion.

Linda al-Assi conducted mysterious tests in small containers filled with liquid which you wear around your neck. Lisa Kröber’s tale is expressed in a lacy idealistic collar-necklace with anonymous empty medallions attached to it. Maarja Niinemägi’s wooden bracelets offer a contrast between material and form. Fabrics, seemingly trampled on or buried under snow, are sensitively carved into heavy and strong wood. Merle Kasonen, on the other hand, explores spatial effects, transparency and opaqueness in her neck jewellery. Kärt Maran’s earrings charm with their geometrically simple forms. A strong sheet of metal seems to be folded gently and effortlessly, defying the natural characteristics of the material. Kertu Tuberg’s fearsome, awe-inspiring sculptural skeleton of a winged monster of rusting iron and wood attracted a humble audience among Soomaa’s inhabitants. A family of deer and the farm tomcat offered wordless assessments. The cat also highly appreciated Marita Lumi’s mouse-brooches, charming creatures with especially forceful and repulsive tails. The greenhouse became a part of the local landscape, and people looked through it, trying not to crash through the glass. It was worth taking a look at the jewellery both inside the greenhouse and from outside through the glass in order to produce and lose a sense of distance.

The exhibition in Soomaa National Park closed in the second half of July. Glass, frames and jewellery were carefully packed into boxes, and the artists will have a brief rest. A natural continuation would be to move further on with the packages, perhaps to Munich to deservedly represent the Estonian contemporary art of jewellery. 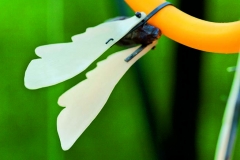 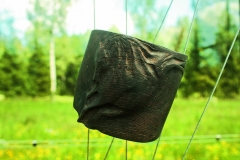 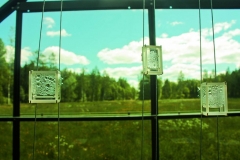 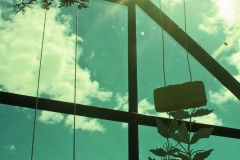 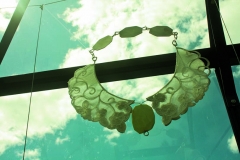 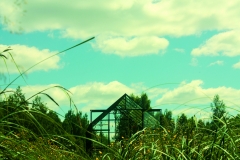