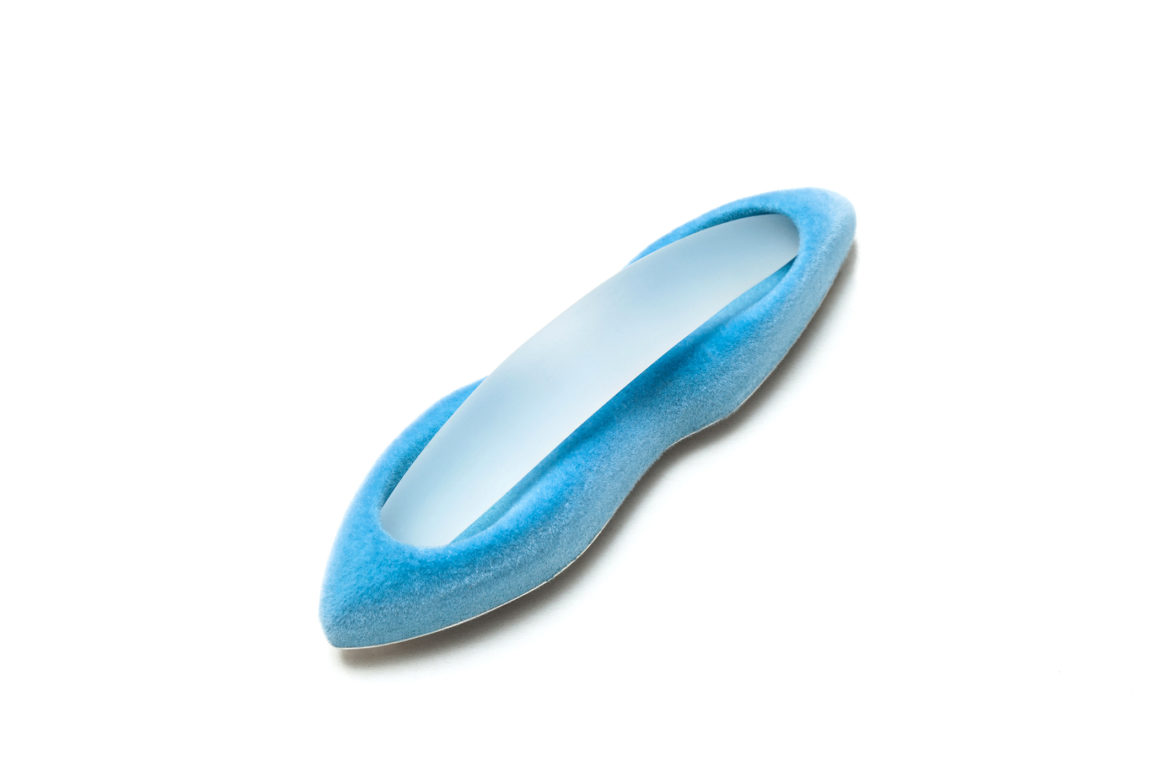 “This virtual world, that has become real, celebrates the end of ideology, history and ultimately of humanity”(1)
AES+F

WOA (work of art) is an acronym used in cyberspace correspondence, along with 2G2BT (too good to be true), 2EZ (too easy) and IVL (in virtual life). These terms are popular among the internet generation, which “refers to a generation that has had access to the Internet from an early age […] known as the Millennial Generation born between the early 1980s to 2000.”(2)  The internet generation work with digital technologies both in the workplace and socially, with a natural adaptation to binary codes. A WOA experiences similar adaptation when it ends up in the virtual world by way of Instagram post or online exhibition, or can even originate in the virtual world by the use of 3D modelling.

In the contemporary context, there is a mutation happening to jewellery art and design, one of the most physical and material of all art forms, due to its absorption into cyberspace and its interrelationship with technology. The concepts of hybrid authorship and manipulation are keys to define the influence of digital technology on the essence of jewellery and also answer the question of what happens when digital and physical, immaterial and material, meet.

Authorship refers to the creator of a work of art. However, a tricky thing happens when a creator enters into a relationship with technology: the definition of authorship is put into question. The non-author perspective is a process of removing the author as much as possible (but never completely) from the role of ‘creator’ by replacing him or her with a machine. During the “Craft and Technology, Experience and Evaluation” summit at the MICX, Mons International Congress Center, Marie-Josè van den Hout, the Director of Galerie Marzee in Nijmegen, Netherlands, gave her opinion on 3D printing. According to her, only handwork can be defined as true art, as 3D printed jewellery is soulless. In other words, as far as authorship is concerned, handicraft is winning the ‘hand vs. machine’ battle.

The machine and its autonomous creation are not neutral. On the one hand, machines and technology are seen as spiritual by some researchers and makers; on the other hand, some put handmade works in the foreground. This conflict is intriguing and is similar to the conflict that occurred during the emergence of photography. Walter Benjamin states that “earlier much futile thought had been devoted to the question of whether photography is an art. The primary question – whether the very invention of photography had not transformed the entire nature of art – was not raised”(3). It is possible that the definition of authorship in the contemporary context should be viewed differently, specifically as hybrid authorship of a WOA: with a neutrality relating both to handmade and machine made work, the refusal to accept the handmade versus machine antagonism, while still not blending these two concepts into one.

Manipulation is the implementation of control, digital manipulation is an act of creating a virtual rather than an actual version of the WOA, for example by using Photoshop or applying Instagram filters (in this way the WOA is deformed when presented to a viewer). Despite the fact that the concept of the ‘virtual’ seems ephemeral, its physical presence is actual and has been referred to as the New Aesthetic. This concept is described by the London-based artist and writer James Bridle as the “increasing appearance of the visual language of digital technology and the Internet in the physical world, and the blending of the virtual and physical.”(4) There is generally dematerialization and virtualization of the artwork happening in the aftermath of the digital revolution, which affects, among other things, an art form that is highly physical, namely jewellery. “The history of every art form shows critical epochs in which a certain art form aspires to effects which could be fully obtained only with a changed technical standard, that is to say, in a new art form.”(5)

Technologies such as 3D modelling/printing and CNC milling almost accomplish the virtual perfection of WOA. Using a 3D printed form as a prototype, it is possible to reproduce it infinitely. It is like a perfect DNA cell that can be multiplied into an army that rejects any imperfections. The machine in opposition to man never thinks approximately, and therefore operates according to certain idealized settings. The machine is a power manifestation disguised in abstract and dramatic forms.

Nevertheless, the goal is not the beauty of the machine, but the beauty of the machine’s function. There’s also beauty in glitches/anomalies/errors made by the machine; more than that, they are not always errors made by a person: sometimes they occur spontaneously. The only machine that can generate WOA autonomously is a machine that comes with AI (artificial intelligence), but while scientists are only trying to create AI it is necessary to understand why the non-authorial perspective, which is a process of removing the author as far as possible from the role of the creator, can never remove him absolutely. Using a 3D printer to create some kind of an item or utilizing the 123D Catch app for smartphones, which allows the scanning of any object or person, the choice is always the author’s. It follows that the absence of the body (the artist) cannot be defined as the absence of authorship.

With hybrid authorship, it is necessary to explain why ambivalence relating both to handmade and machine-made work doesn’t imply blending these two given concepts into one whole. It’s good to point out just how important the artist’s (at least the applied artist’s) particular ability really is in the contemporary world, an ability to combine hand work and machine work in such a way that one does not overshadow the other, and neither suffers from the other’s superiority.

Authors who use modern technologies in their works have the ability to create an item that is confusing even to the most experienced viewer. For example rubber has an ability to play tricks on the viewer. Nobody identifies it as rubber, and not even as a flexible material. Usually people mistake it for crystal or glass. But one of the most important aspects of jewellery is tactility: the capacity to experience the material by touching it. One almost unnoticeable flexible movement that occurs when direct contact with the jewellery happens is enough to cause the viewer to experience childlike awe.

Given the fact that the rubber is used for casting, which means the components A and B (urethane rubber) are in liquid form before their mixing, 3D modelling can be used to create the desired shape; after which printing the model obtains the mould for rubber casting. Naturally, after the casting the item is in need of mechanical processing, and thus the handwork aspect is not in any way inferior to the technologies applied to the item’s creation.

When talking about the application of technologies, we should ask ourselves if there is an inversely proportional interrelationship between machines and humans. The ability to use a machine usually does not imply universal knowledge in the field of technologies in use. For example, we use smartphones, rarely knowing just how they work. The same can be said about 3D printers, scanners etc. Bruno Latour has referred to unknown innerworkings as a ‘black box’.(6) Complex systems are not as important in relation to the machine as the material we provide and the material it produces. Such are the circumstances of post-digital reality, in which the creation process becomes less and less transparent and ambiguous. Objects created are presented as born-digital WOA, which refers to “any material that originated in digital form.”(7) 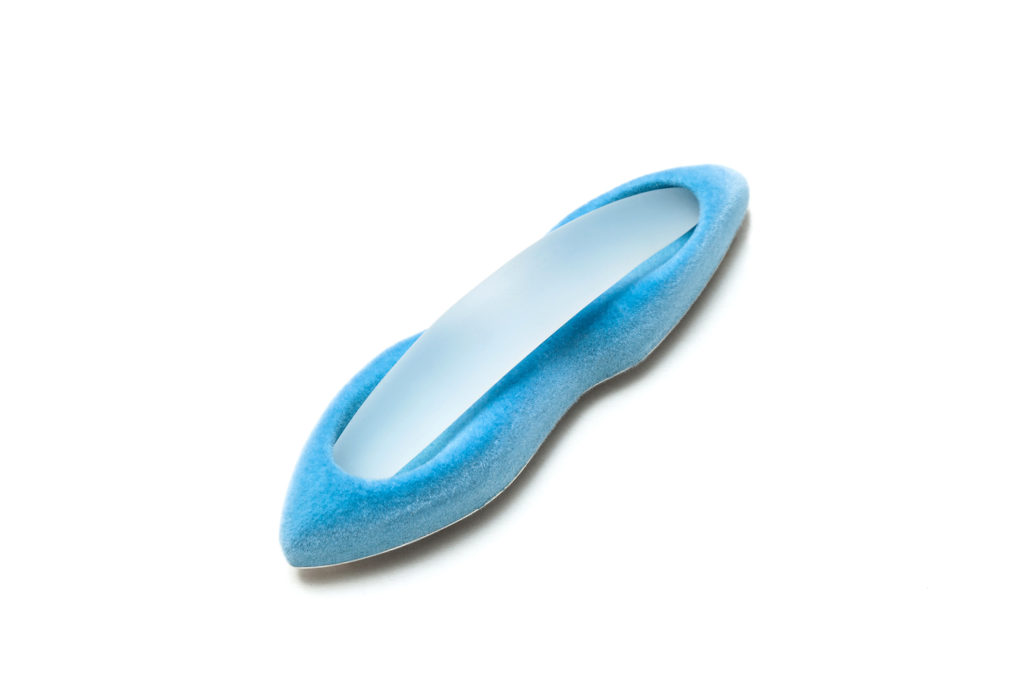 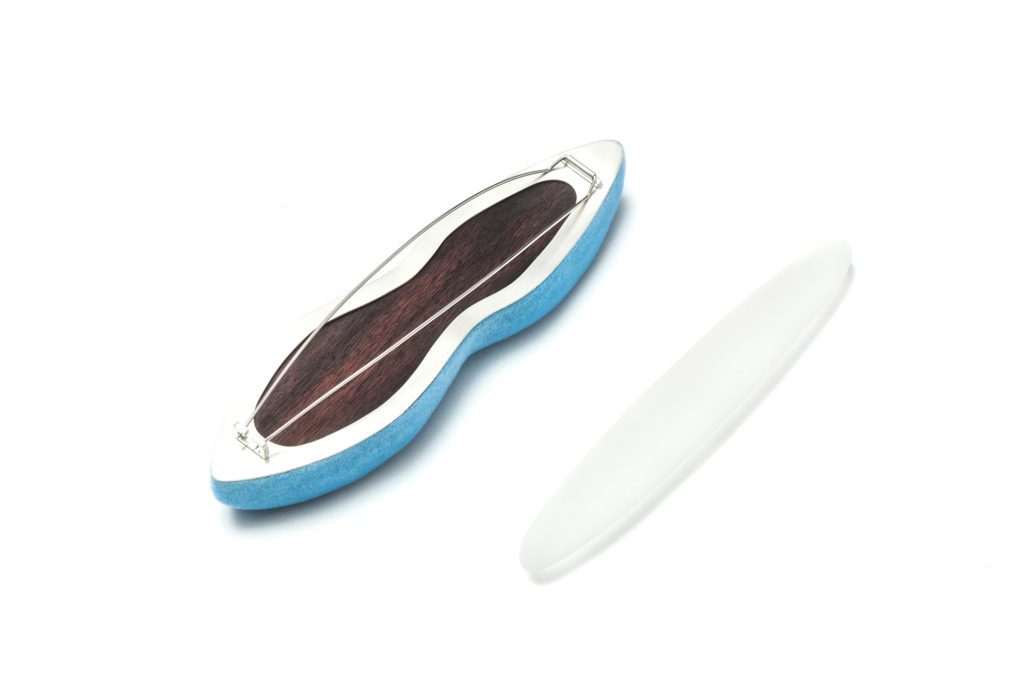 Jewellery is a highly physical form of art. Tactile experience is inherent in one’s relationship to jewellery, although with the advent of Web 2.0 all artworks were affected by the perception of photography or video on the digital screen. Presently, immediate contact with the WOA happens more and more often in cyberspace than in real life. For example on Instagram a user called @jewelleryactivist shares 10 reposts a day and has more than 24,000 followers on Instagram, while it is possible to look at 128,522 posts hashtagged #contemporaryjewellery. This amount exceeds the number of works you can see in real life in the same amount of time.

Consequently, the realm of cyberspace intervenes in the physical offline world and also in the physical space of WOA, and lends it new qualities. These changes are not always conscious. Coming back to the topic of manipulation, it is worth noting that most of the photos depicting physical works underwent Photoshop processing and/or Instagram filters. Countless digital layers are sometimes laid on top of a real object to manipulate the image, more specifically to give the object some desirable qualities that it does not have in the non-digital world. Usually, a successful photo in web 2.0 has definite attributes, such as specific colours, light, composition etc., not to mention the caption.

There is a whole art of drawing attention and likes online. However, very often the web absorbs and multiplies only the visual aspect, while the name and date of the artist and work are the first to vanish. “Like a wheel’s tire, the image gets stripped of its own form through its continued use. This creates a peculiar, inverse reaction: the more famous an art image becomes, the less its author will be attributed.”(8) Cyberspace as well as the machine eradicates the concept of authorship: everything on the web belongs to the web and can be used without restrictions by users of the web; these circumstances consequently generate a new hybrid authorship of a WOA.

It would be wise to separate social networking as a marketing tool used to attract viewers, followers and buyers from social networking used as a material for WOA for the artist. For example, Juliana Huxtable’s Tumblr “BLUE LIP BLACK WITCH-CUNT” is not a tool but a medium (material), by which the artist erases the boundaries between the real and the virtual. During the “Networked Images. Artistic Practices Before and After the Internet” conference in Basel, the art historian and literary scientist Dr. Antje Krause-Wahl pointed out that Juliana Huxtable’s artificial blue, Internet cable coloured lip-gloss emphasises virtuality. Perhaps that is exactly “virtual materiality”, a phenomenon in which the real becomes virtual and vice versa. We have the presence of jewellery, on one hand, and technology, on the other. As the purely digital is just numbers, is it possible to assume that combining these two opposite WOA creates a new status: cyber but real?

Sofia Hallik (b.1991) is a jewellery artist and PhD student at the Estonian Academy of Arts and the founder of SOMA jewellery.