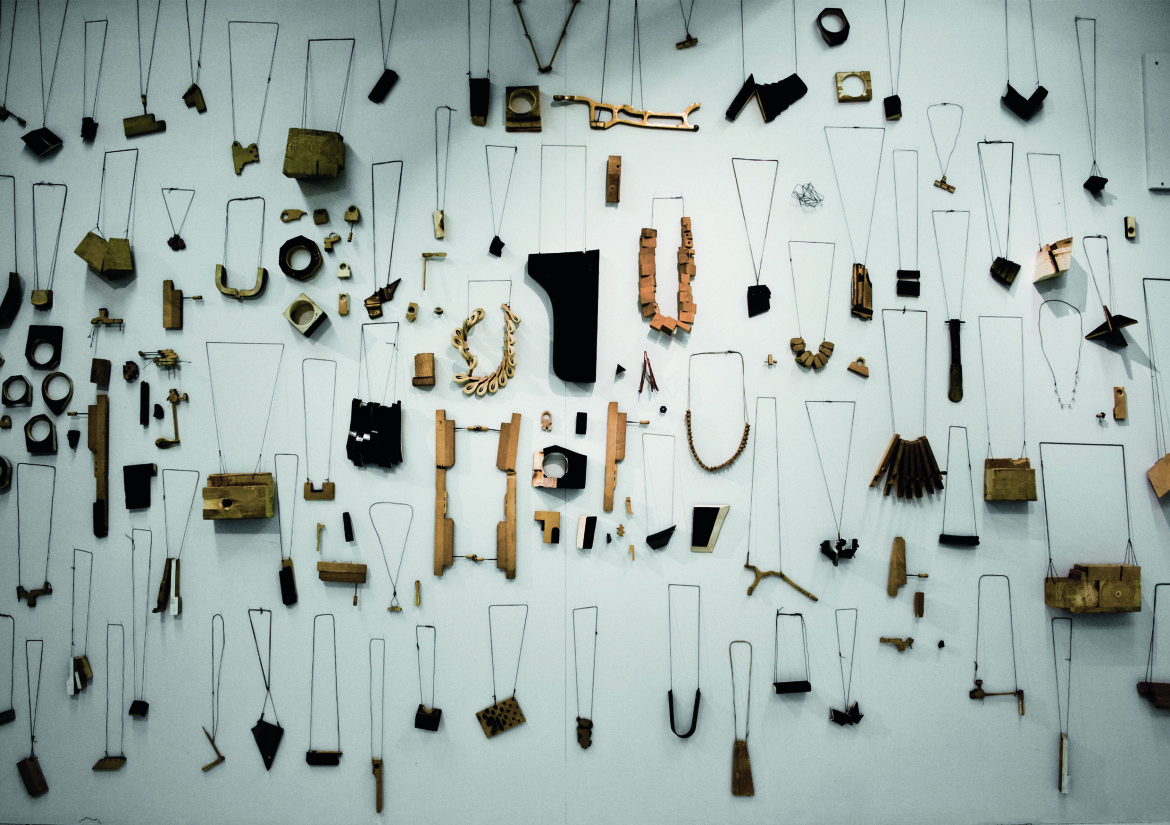 In November of last year, when Kristi [Paap – Ed] and I were about to display a work presented to the triennial – a jewellery series consisting of about 300 piano fragments (group A5, Sweden) – I saw it as a technical task. I was convinced that on the basis of detailed instructions prepared by the artists it would take us a maximum of two to three hours to install everything. We knew that the artists had packed every item separately and numbered them, and fixed each item’s position on the 2 × 3 m wall clearly in a photograph. However, the moment I started unpacking the works, the rational part of me retreated and I stared, spellbound, at each tiny revealed detail. I was amazed by all these pieces physically, and the mastery with which every one of the best-known musical instruments in the world had been crafted by artisans. The bold and marvellous choices of jewellery made by three artists were equally impressive. All these different bits of wood, unprocessed, painted and varnished side by side, partially covered with felt and joined, spliced and screwed together, and the screws themselves, in all sizes and weights, every single one transformed into pieces of wearable jewellery by means of simple string or wire clasps. I was fascinated by the collection of details with different forms. Looking at a piano, we certainly have no inkling that they are there, but we have all heard the sounds born out of their mutual cooperation. In choosing the source body for their work, the artists found that in their home town of Stockholm it was possible to acquire an old piano at the cost of transport only. The artists stepped in before a piano was discarded and thus changed its fate, making it available and alive in a new manner, perhaps even to a totally new audience who could appreciate it in their own way. 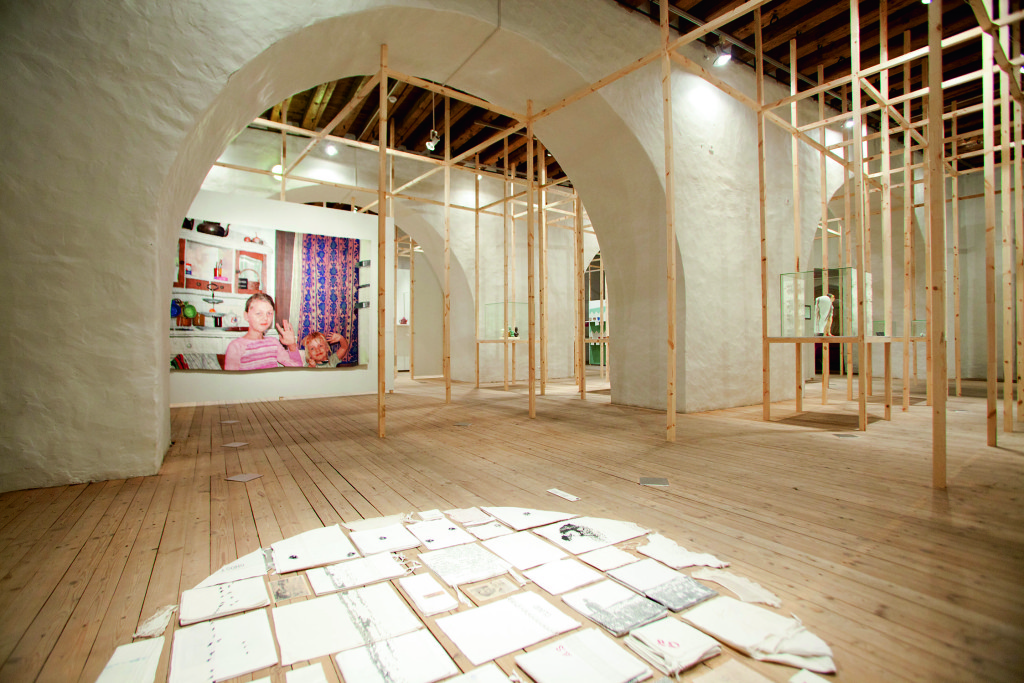 Later, when I guided tours at the exhibition, I often observed visitors’ indignant reactions when I explained the background of the British artist David Clarke’s work. An old silver tea set bought on E-bay, with a specially made silk-lined wooden case, into which the artist had burned holes with lead. For the artist, it was clearly a liberating act to give new life to an article that for years had been resting in its ‘coffin’, as it were, and because of its considerable value was unable to fulfil its original function, although it was polished until it sparkled during each pre-holiday cleaning ritual. The artist had thus irrevocably destroyed its original function and opened the work up to new meanings. For viewers, Clarke’s unexpected, decisive treatment of the tea set raised many questions, primarily from the point of view of ethics and authorship. I was often asked whether the character of the work was not due to the artist’s modest manual skills. I recently read that the artist had experienced similar criticism earlier in his career as well, but I would like to emphasise that he has superbly mastered the techniques for producing forms and is a much appreciated teacher in the field as well.
III

The 6th Tallinn Applied Art Triennial is over, but during the current Year of Cultural Heritage the title of the triennial – The Art of Collecting – continues to prove its topicality, raising issues of how to interpret and maintain already existing collections, as well as possible new heritage. How collecting and everything linked with collections were regarded by the participating artists is explained in the triennial catalogue. Whatever the initial items of the artworks – old documents or photographs, porcelain or ceramics, handkerchiefs or towels, a phone book, colour pencils, bottle corks, X-ray photos, used toys, a jacket or other items – they all revealed a fascinating story, offering food for thought on several levels. The weight of the unwanted accumulation of things was the focus of many artists, expressed at the exhibition through a lot of recycling, which is quite symptomatic of the modern world. Internet-based guidance pages warn victims of collecting, and others state that nobody has the obligation to accept or preserve other people’s things. It is increasingly obvious that not everyone wishes to turn his or her home into a family museum that reflects and commemorates the tastes and choices of relatives. This is exactly what the numerous pianos in Stockholm or the liberation of a tea set refer to. Items that can be significant shapers and bearers of local identity in a memory institution do not necessarily function like that, on the level of the individual.

On the day that papers were presented by triennial participants, the young German jewellery artist Deborah Rudolph told a story of how she was approached by a collector of an advanced age who was trying to find someone to leave his minerals collection to. The artist was interested, but the owner’s condition was that the collection be preserved in its original form. The artist refused on the grounds that if she were not allowed to use the stones as she wished, she would not know what to do with the collection.

The aim of the triennial is not to display pretty things made during the past three years or astonish viewers with technically complicated handiwork, but to show the artists’ very diverse ways of focusing on certain topics and of dealing with the practices of applied art. Among the record 515 submissions for the triennial, the jury excluded professional works which did not suit the given theme – this is the inevitable reality each time. Choices based on the curator’s concept and the vision of the jury members resulted in an exhibition greatly enhanced by the vision of architects. Displaying different collections side by side in a room under heritage protection could have failed, but the architects’ idea skilfully neutralised the historical spatial impact and arranged the most diverse works in a convincing kind of archive. The monumental solution focused separately on each collection and helped to emphasise it.
In the end, it took two people two days to install the A5 piano pieces, and this was just the first among many works at the triennial where I lost my sense of time when I became more familiar with them.

Main exhibition: The Art of Collecting at the Estonian Museum of Applied Art and Design, 515 submissions; the jury selected 75 artists

The Art of Collecting. The Art of Sharing; exhibition of MA students of the Design Department at the Estonian Academy of Arts, curated by Tiina Sarapu, at the Museum of Occupations

70 Cotton Smocks, Marit Ilison in the staircase gallery at the Museum of Applied Art and Design

(1972), jewellery artist and culture manager. She graduated from the Estonian Academy of Arts in 1995. Since 2002 she chairs the Tallinn Applied Art Triennial. She is also an active spokeswoman on contemporary jewellery art and lecturer.