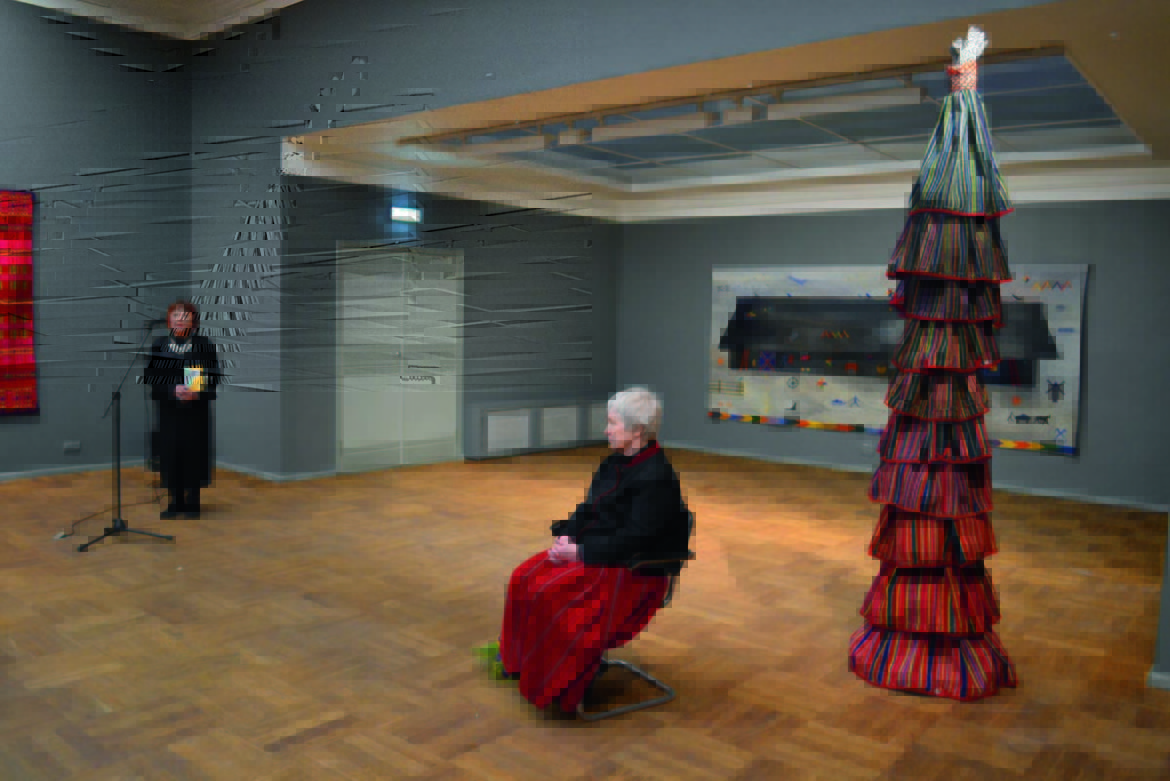 “Anu, you have Estonian eyes”: the textile artist Anu Raud and the art of generalisation

The retrospective of Anu Raud (b 1943), Estonian Cause (Eesti asi), opened in the Tallinn Art Hall in February 2013, just a couple of days before the 95th anniversary of the Republic of Estonia and less than three months before the artist’s 70th birthday. The exhibition featured over 60 textiles from six decades, starting with Raud’s 1967 graduation project for the State Art Institute. This series of blankets, rugs and curtains designed for an old country inn on the small island of Muhu contained the germs of what would become the hallmarks of Raud’s work: sheep’s wool as the preferred material and weaving as the preferred technique, octagrams and other elements borrowed from folk art, inspiration drawn from peripheral areas of Estonia, as well as from small details of everyday life, the aspiration to a harmonious coexistence with nature and with previous generations, and a tasteful palette of colours, ranging from countless shades of black, white and grey to glowing reds and yellows, from purple and blue to warm browns. 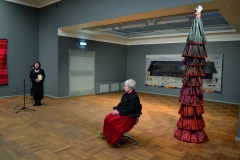 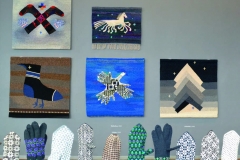 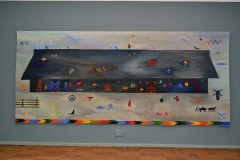 The curator of Estonian Cause writes in the little booklet accompanying the exhibition that Anu Raud’s approach to folk art differed, from the outset, from that of her supervisor Mari Adamson (1908–2000) and other textile artists educated in the interwar years. Whereas others used folk patterns to create decorative backgrounds or weaved national romantic scenes, Raud elevated folk art motifs to colourful constellations of symbols that spoke to contemporary viewers on contemporary issues – and continue to do so. As one visitor of the retrospective put it in the exhibition guestbook, a thick volume filled with words of admiration, “Anu, you have Estonian eyes.” The anniversary show was a magnet for people from all walks of life, drawing thousands of viewers in just four weeks.

Seeing and letting others see with ‘Estonian eyes’ requires a remarkable ability to generalise. After graduating from the institute, Raud worked for several years at the recently established Association of Handicraft Masters UKU, which produced souvenirs and household items in the Estonian national style. One of her tasks as a professional artist was to travel around the country and communicate as well as consult with local craftswomen and craftsmen. In this way she got to see every corner of Estonia and its regional patterns. Raud pays attention to details while keeping the whole in mind. More often than not, this whole is the ‘Estonian thing’ or Eesti asi. The Estonian-language title of the retrospective referred both to material culture, i.e objects deemed characteristic of Estonia, and to Estonia as a principle, aim and movement the artist feels a deep sense of commitment to. Raud uses folk art as a springboard to tell stories about simple things that create continuity and, especially since the late 1980s, to knit together the Estonian land, people and the nation-state by means of familial ties. Her folk (rahvas) are of Estonian descent and speak the Estonian language, attend the Song Festival regularly and are rooted in the Estonian dark soil. The colour combination blue, black and white has popped up time and again in textiles of the past two decades and also predominated in the design of the exhibition booklet. Raud’s representations of Estonia adorn numerous school buildings, churches and embassies – institutions that serve particular pedagogical functions or embody the Estonian state and values held to be eternal.

While Raud summons her domestic audience as the inheritors of ancestral wisdom, she also lives what she preaches. She left Tallinn nearly two decades ago to settle on her grandparents’ farmstead in southern Estonia and has since developed it into a centre for studying and experiencing folk art. In the early 1990s, a period of harsh economic uncertainties, Raud used the money she had made from selling her works in Sweden to buy an adjacent old school building and turned it into a museum that houses her vast collection of Estonian traditional folk art, which she started while still a student. In 2009, when the Estonian National Museum celebrated its 100th anniversary, she donated the museum building and its contents to the Estonian state. She taught for over two decades at the State Art Institute/Estonian Academy of Arts and later in Viljandi, at the Estonian Native Crafts Department she helped to establish. Nowadays, one can find her students in all textile departments in Estonia. Overall, Anu Raud follows in the footsteps of her namesake Kristjan Raud (1865–1943), one of the first professional artists in Estonia, who was likewise an avid collector of folk art and a museum enthusiast, made heritage a focal point of his aesthetics and was tireless in his efforts to explain heritage to the general public. Yet Anu goes one better than Kristjan by keeping a flock of sheep that provides her with raw material for her woollen art.
However, the art of generalisation works by means of detachment. Interwoven with Raud’s textiles in the retrospective were dozens of pairs of hand-knit gloves and mittens, as well as several woven blankets from her personal collection of material folk culture and those of others. The inclusion of these samples can be viewed as an homage to the artist’s major source of inspiration and learning, as a token of partnership and recognition that goes back decades. Even so, the anonymity of authentic ‘folk creations’ stood in stark contrast with the brand Anu Raud, raising uncomfortable questions about power and ethics that plague contemporary scholars of folk culture. Collecting was at the centre of the Soviet-era study of folklore and ethnology and, in the case of material culture in particular, could take rather ruthless forms.

One of the great contradictions inherent in the concept of heritage is that while it claims to safeguard traditions against oblivion and decay, it functions simultaneously as an agent of change and displacement. Whether a way of life, a song or a type of singing, a built environment or a festival, labelling something heritage endows it with new symbolic meanings, moral weight and economic potential. Objects considered to be a part of folk culture are likely to travel to museums and other new locations, but even if objects stay where they are, being classified as heritage tends to remove them from their ordinary contexts of usage and the cycle of wear, tear and modification. Looked at from this perspective, heritage is a thoroughly modern way to relate to the past, a metacultural practice in which phenomena are turned into representations of themselves and of supposedly homogeneous imagined communities. By emphasising roots and ancestry, heritage naturalises the conditions of belonging and diverts attention away from inequalities among ‘heirs’, and away from contemporary issues of diversity waiting to be addressed in Estonia and elsewhere. As was implied above, there are also questions of authorship and of authority involved in speaking on somebody’s behalf, in the name of the ‘Estonian cause’ – all very relevant in 2013, a year dedicated to cultural heritage.