A small history could be written about misunderstandings that would constitute a sub-division of Big History. That small history would contain everything and everybody, the symbolism of the entire human existence, and how the symbolism finds expression in an individual.

That history would inevitably be subjective, contrary to the aspirations towards obje 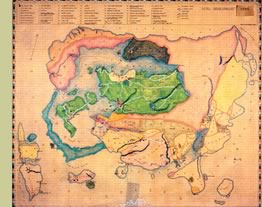 Estonia is a peculiar place. This slice of land possesses a strange historical-geographical dimension where the burden of heaviness and lightness join together, as Kundera might put it. Estonia is not situated at the edge of the world, but on the border areas of several worlds. When Samuel P. Huntington drew an imaginary line between the Orient and Occident, it ran along the eastern border of Estonia, letting Narva retain its status as a border fortress. What faces the fortress, however, is the Desert of the Tartars. Toomas Liiv once pointed out the significance of Tallinn’s silhouette, one of the dominant features of which is the Toompea Hill with the protestant Cathedral and the orthodox Aleksander Nevski 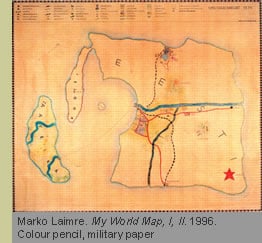 cathedral in close proximity to each other. In addition to the fact that Estonia is geographically ambivalent, part of the ‘window onto Europe’ and not Europe itself, it is ambivalent also historically. It has had its share of Eastern tyranny and Western democracy. Such experiences blend on the ground where a stranger finds very little besides stones and bread. Despite that, however, it seems to be situated at the ‘crossroads’ of various movements.
The national-romantic wish to see Estonia bigger than it really is, has not vanished even today. One should just listen to our sports commentators who can, after an outstanding achievement of an Estonian athlete, talk about ‘placing Estonia on the world map’. Since Estonia’s geographical position and size are marginal, this metaphor might be very suitable, dispersing the fear that Estonia can hardly be seen on a real map either.
Marko Laimre’s maps do have Estonia on them. However, the older Laimre’s map-maker becomes – and the smaller and more marginal Estonia becomes – the more complicated will be Laimre’s politics of maps. It inevitably means that the image of Estonia will be more realistic. In other words: the subjective world map will increasingly look like the objective world map.

Here I return to a misunderstanding that is significant to me, and I’d like to take it further. Maybe it wasn’t so much a misunderstanding, but too narrow an interpretation. In any case it seems highly meaningful to me. The first thing that struck me in Laimre’s maps – and my memory cells selected this sensation for permanent storage – was that they show different levels of national perception. The bigger Estonia was on the maps, the more ‘national’ – or ‘fiercely nationalistic’, depending on the point of view – I took the compiler of the map to be. I therefore understood Laimre’s maps as subjective cartography, albeit not with an age-historical, but with a national-perceptive emphasis.
Drawing a subjective map would thus be a means for an Estonian individual to reflect the image of himself as an Estonian. This is of course my personal opinion. After all, we are talking about a subjective map here.
As an Estonian, I perceive a contradiction here. The inhabitants of big nation states and simply big countries (Canada and Australia) as a rule fail to make this same perception, for the simple reason that a German in Germany perceives his subjective perception as overlapping the objective reality. When a Frenchman has feelings as a representative of a big nation, both in literal terms and figuratively, it is quite difficult to accuse him of being unreasonable. With Estonians, it is not so simple. The opposition between objective circumstances and ideals or imagination can develop into a schism. Since Estonia is not a big country or a territory, one of our national ideals is to ‘become great in mind’.
The opposition between national ideals and objective reality should in fact be revealed also on a hypothetical symbolic map. Ideally, Estonia on this map would be the size of the Ukraine, or failing that then definitely of France, but at the same time all other countries would exist on the map as well. In that case it would not be the difference in size that was important, but the very existence of various territories. Maybe this is indeed one way to do it? To map nationality balanced with reality, as it were?
I dare say that many contemporary Estonians have two contradictory emotions in them, emotions of which they may be aware to a greater or lesser degree. The first regards homeland as an area with unsurpassable significance. The other perceives how innumerable alien, rich and lucrative areas lure them away from the significant area. Schizo-analytically: the modern Estonian vacillates between re-territorialism and de-territorialism. Between the near-border areas and the ‘big wide world’. Looking at things from the latter, means that the border areas – home for Estonians – become even more marginal. There are many possibilities: one can (if one wishes) re-territorialise an alien area, but it can equally well be the other way round: it is possible to re-territorialise the previously de-territorialised home ground.
I could present the balance – a subjective vision of balance – in the form of a map where Estonia would be situated in the centre of the world, its area would be enormous, it would be visible, but it would still be surrounded by a diverse world whose territory in the end exceeds that of Estonia several times, however large we make Estonia. What’s more: the purely two-dimensional surface of the map could be the home ground of the drawer of the map. The rest of the world could be drawn spatially, three-dimensionally, thus denoting the partly alluring and partly frightening unknown – something one might perceive while setting off on a journey – and the multiplicity of possibilities smouldering in there. The only ground, however, without any devious depths, is the one supporting the golden roof of one’s homestead.