Using sounds in art, and the other way round

At the 10th anniversary of 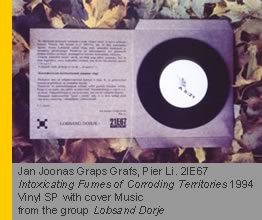 Group T* in 1996 at the Art Museum of Estonia, Raul Saaremets displayed his I Have to Think – a piece of music played in the Art Hall. The scheme of the piece was gradually moving, containing the hysterical-dramatic extravagance, keeping watch on its ideas, sounds and movements, typical of this legendary band. The author with his band Röövel Ööbik (Brigand Nightingale) also accompanied several Raoul Kurvitz and Urmas Muru’s performances. The Nightingale was a band at the time of a political turning point, establishing local music trends, then moving, offended, from its punk-status to more artsy things and later towards electronics, when the militia stopped arresting underground people with long hair or an Iroquois haircut. A demo-cassette smuggled out to John Peel from behind the Iron Curtain made the almighty BBC disc jockey jump with joy; the experts thought that Peel might have been charmed by the band’s attitude to music based on their art school background. Another composer was connected with Group T – Ariel Lagle who mostly worked with delicious ambient textures, using the synthesiser as an instrument of flowing, a slow shift in texture on the border of imperceptibility, and reaching the archetypal qualities of sound. 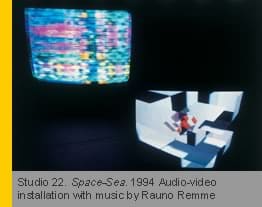 The few installations and videos of group 21E67 that existed for a short period in the early 1990s were, to put it mildly, weird and fluid, especially in the context of the art machine that chases its own meaning in unison. As part of the project for the exhibition Unexistent Art**, a vinyl record of the spirited ambient orchestra Lobsand Dorje 9” was produced. At the first underground events with electronic music, there were often performances by architect Marko Sula alias Out-Or, whose fusion-electro is dominated by a singular clear, optimistic-modernist mood. Aivar Tõnso, founder of record label Ulmeplaadid (Dreamy-records) and the festival Brave New Sound was later busy in the same area. At the 2002 Hamburg ArtGenda the latter participated in the organisation Hörbar e.V. project Noise Factory; the sound for the architectural photographs referred to an architectonically similar location in experimental music and architecture.
Performance and video artist Jaan Toomik often uses original sounds of meaningful places or persons, his videos are frequently like illustrations to books of Castaneda, Sanchez, Maurat or Mary Stewart: mirrors, ancestors, dance of conditions of the conscious, checked follies, summaries, illusory movements, nondeeds. In his audio-video installation Dancing Homethe author dances on the quarter-deck to the accompaniment of the sound of digitally untreated ferry engines. In collaboration with the art-rock guitarist and composer Rainer Jancis, Toomik has arranged a happening with typically simple imagery: the artist armed with a car engine and gas pedal, entered a dialogue with the hysterical guitar. Participant in the legendary indie band Metro Luminal and several international projects, Jancis, considers all his performances as so-called sound-art. In general, they are elaborate and unexpected; playing single-string guitar in the drawing room for two hours, or improvising on instruments with sacral acoustics almost without touching them.

Several approaches in the field of typically

contemporary sound experiment and environmental art were demonstrated by MKDK records Artist Unison Project, led by multimedia artist Raul Keller. Jüri Ojaver has created place-specific sound alienation, converting the sounds of a noisy bridge to the nearby quiet pedestrian bridge. The personal sound-lab Empty Space of artist and sound freak Andres Lõo has accompanied several of his own exhibitions, and those of photographer Peeter Maria Laurits as well. Lõo and the undersigned’s co-operation denotes a cataclysm of ignoring traditional discipline for experimental sound practices: performance 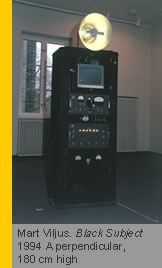 What do we mean by sound-art: communication acts that are difficult to understand through normal perception, sounds altering spatial orientation, phase shifts between left/right channel, influencing the brain waves by the same frequency sounds, everything that has already been or is no longer music, or is once again what there is plenty of. Musician and poet Lauri Sommer, synthesising with low-technology archetypal sacredness, has developed a practice that he himself calls Dictaphoneshamanism. The idea: The human head is actually the most powerful mixing machine of all, belongs to Sommer as well. /…/ After all, why cannot the world in fact constitute a huge number of records in God’s bag of records that He keeps on top of a small nebula, besides a grammaphone.

* Group T, operating since 1986, regarded as the establisher of performance art in Estonia and one of the first groups reflecting postmodernist art practice.
** Unexistent Art, the 2nd Annual Exhibition of the Soros Center for Contemporary Arts took place in several venues in Tallinn in 1994. Curator Urmas Muru