There are many people in the world who are worried about the present state of art and about its future. Conceptual art, for example, which started by investigating the deepest layers of culture and passed through the stage of fighting for social or political justice, has practically become a pointless heap of junk or a circus, and that mainly because of its most popular technique  installation. Modern technology has imposed on art the need for interactivity, but the public rarely has a chance to intervene in a work of art which would make any sense. The global village requires that everything be understandable to everybody. In most cases, the result is banality, which is not really surprising considering the wish to please everybody and the knowledge that we can all become artists. Theorists claim that it is impossible to create anything new, that everything has already been done.

They are right. Hence the principle  simply re-do the crap. The majority of young Estonian artists are certainly not among those who shed tears for the future of art. They are not really interested in art at all. Real life is much more fascinating.

The young Estonian artist is extremely flexible. He or she can crop up in any context, following their own ideas. Even the artists who have been invited to participate in commercial ventures as clowns still manage to get their message into the media. According to a local tabloid, the public at a cigarette company‰s advertising venture was somewhat disappointed to see a performance by the violent seagull-god Raoul Kurvitz and Ene-Liis Semper who, wishing to seduce him, kept throwing small herrings at him, some of which fell among the audience and all of which stank horribly.

Many elderly critics and artists are also disappointed: they think the young have completely sold out. But what is the use of exhibition halls when their message is meant for far wider audiences?

The most original invasion of public space is the roadshow, already becoming a tradition. Andrus Joonas, a self-taught man who lives in the country, started the whole thing with his own solo roadside shows near his home, which have been going on for years. The first joint project, the roadshow Speed near Tartu in 1997, organised as part of the Dionysia festival, had the critics saying that all had already happened in America, and had been done much better. The road artists are not particularly interested in what has already happened, they are interested in what is happening now.

We, unlike westerners, stand at the crossroads of the barter economy of an agrarian society, early capitalist jungle laws, totalitarian terror, romantic nationhood, industrial welfare state and the intangible information society. The view from that point is somewhat different from a view from inside any one of these. The road art and its derivatives in exhibition halls are currently called transpop. Its common feature with pop art is using the language of mass culture, but it is a far cry from making a fetish of banality.

At times, extremely refined forms are used. Tarrrvi Laamannn, one of the most original young Estonian artists, illustrated the Book of Revelation. The symbols he used were not ancient signs which are unknown to people of today, but everyday common things: a television set represents temptation, a lamp represents light etc.

An artist as a sensitive creature is not untouched by the absurdity of our surrounding world. We should not forget where we come from. Soviet Estonia was like a huge colony of artists: if you did not feel like doing anything, you could exist on practically nothing, just watch the clouds passing by and contemplate the meaning of life. Our current early capitalism has totally changed people‰s notion of values. In advanced capitalism, everybody already knows that the meaning of life is leasing; we still have to get used to it.

If a few years ago the artists‰ attitudes were rather uncertain  the market economy might, after all, make all the decisions both inside a human being and in society  then at this summer‰s roadshow Speed 2, so lavishly displayed on huge advertising posters all over Estonia, the tactics and strategy of transpop had already been clarified. Unfortunately it is no use to try to picture poverty of mind in art with the help of pop  it will only create more poverty of mind. The straight approach is not customary in elitist art, but it is the only possible solution for road artists. A picture by SÄtevaka Andres resembles a car advertisement, but instead of words inviting you to buy, the text declares that a luxury car is in fact an extension of the penis. And so it is. Let us remember here that the nouveau riche of Estonia are in fact in the habit of leasing an expensive car the moment they have purchased a new tie. It is difficult to imagine what happens when the business goes bankrupt. And it often does. 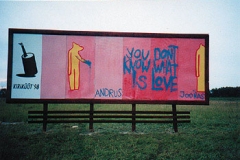 The road artists advertise the same things as the real advertisers, only in a negative sense. Viewers with some TV advertising campaign or other still fresh in mind may begin to think when they see the Kiwa mural. It pictures a stylised person (fashioned in a socially acceptable form) who is surrounded by the names of different TV channels. The person says: ėWho calls me, that is the question‰. (i.e. who will get my attention). Sometimes transpop takes absurd forms, rather like stupid jokes. Jasper Zoova, for example, paints in huge letters: ėZoova, king of the Universe‰. It is truly depressing that many a snobbish boss in the Republic of Estonia who has achieved his little power actually considers himself king of the Universe. This summer‰s media event No.1 was a gourmet evening for a few dozen of such snobs whose organisers had promised that no less than Luciano Pavarotti himself was going to sing. Before the event, all the newspapers were full of solemn speculations about whether the great singer would indeed turn up; there was a heated argument afterwards as to whether the rather heavily built swarthy gentleman who could be glimpsed in the nearby bushes was in fact Pavarotti or just an actor disguised as Pavarotti. It goes without saying that there was no Pavarotti. Stories like that, and grimmer ones too in which huge sums of money disappear from banks and people are shot and have heart attacks, do happen quite often. When the leaders of society go in for such crap, then occasionally the artists are well justified in holding up a distorting mirror. We are not as important as we think. A tourist‰s first acquaintance with Speed 2 occurred at the Estonian-Latvian border where stood Taave Tuutma‰s picture in the Estonian national colours. The picture showed a sombreroed Yank who was asking: ėWhat‰s the problem? Who the hell is Esti?‰

We use big words about integration, peace, economics, but these words mean nothing. Kaspar Toome‰s project of posters in city space at the festival KirikÄÄt ė98 (in which Speed 2 also took place) reminded us of the fact that war is not something you watch on a video, but a real disaster. The absent-minded viewers cast an eye over the hoarding which offers them a mixture of redemption, cat-food, disco etc., until they are jerked out of their apathy by a short message: ėDeath  the only certain thing‰. It works.

The artists want to warn us, and the warnings are mostly painful. Warnings are not part and parcel of the traditional features of art, like ėbeauty‰, ėthe sublime‰, ėtranscendency‰ etc. They are not actually suitable for an exhibition hall, they do not function as entertainments either, and thus no foreign curator knows anything about transpop. It is interesting that most of the young and talented are in to pictures: paintings, graphic art, videos. The first two have become total strangers to the international arena of contemporary art. There is no surplus money for art in Estonia, therefore it is extremely difficult for an artist, especially a young one, to arrange huge multimedia performances, complicated installations and gigantic colour photographs. Instead of wasting energy on running around finding the necessary equipment, it is more convenient to pick up a brush and a piece of cardboard, and convey your message that way. There is another good thing about a picture: a level surface allows information to be concentrated so that the viewer can easily read it. Although projects involving an enormous amount of material and technical support are certainly accepted in the artworld-wide-web, it is easier to hide emptiness behind their external effects. It is far more difficult to lie in a picture.

But more important than any impact on the outside world is that the citizens of Estonia should see the artists‰ work.