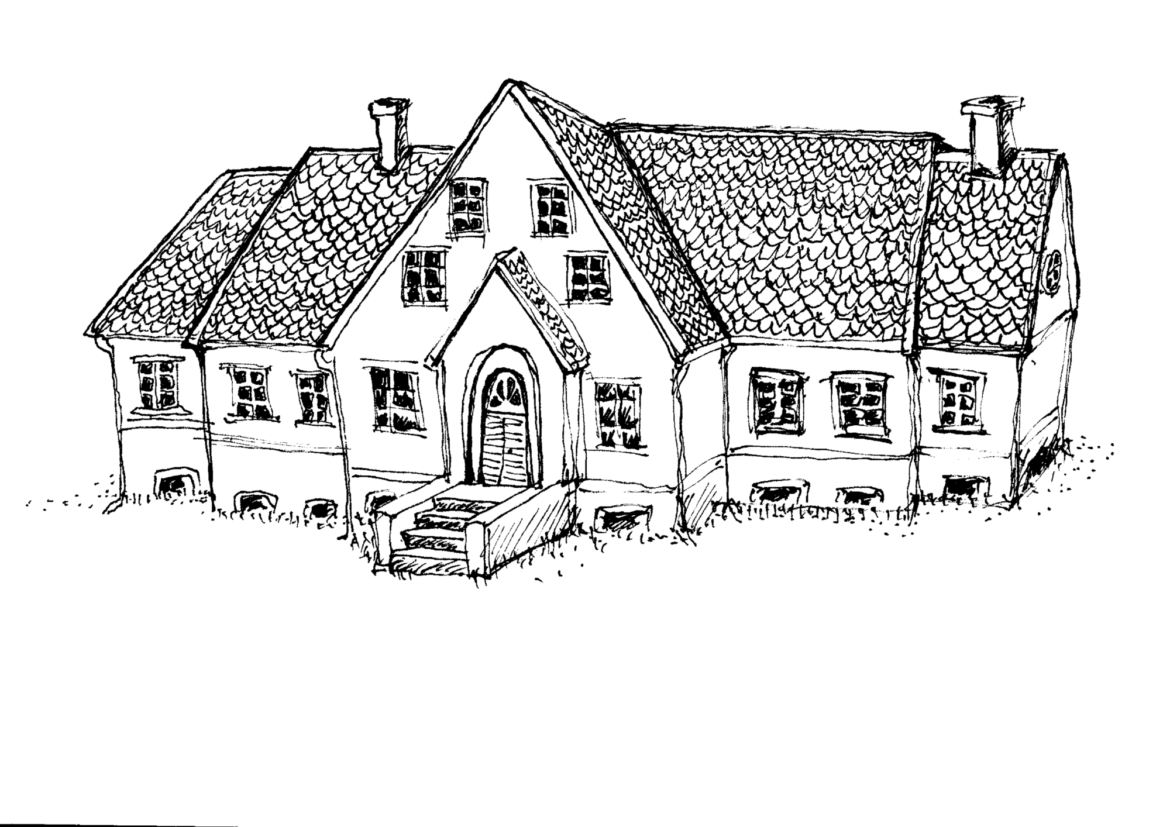 The first time I went to MoKS, I arrived by taxi from Tartu, since the buses were running infrequently.  It was a Saturday, I think, and I brought a bouquet of flowers with me from my hotel.  On arrival, the manor house buildings of Mooste Manor, some renovated, some in ruins, confused the taxi-driver as much as they did me. I felt that I had arrived at a mixture of different historical time periods, with the old manor house buildings restored and functioning next to the Soviet-era grocery store and run-down buildings from the time of collective farming.  Finally, we stopped when we saw a couple of people standing on the steps outside of a yellow house that looked familiar to me from their website. This was indeed the MoKS artist residency.

I was welcomed by the residency administrators, John Grzinich and Evelyn Müürsepp, along with their little daughter Kate and Siiri Kolka, the house manager.  That weekend John was giving a workshop on how to create different kinds of microphones. The students were from different places, including Tartu and Tallinn. I learned later that there had been a general interest in underwater microphones in this particular workshop.

Siiri took me on a tour of the building, and explained to me how the second floor had recently been renovated to add two new studios and living quarters, one of them used by Evelyn and John when they stayed at MoKS. Upstairs there was also a little library and a projector for film screening nights.  In this common area there were also mattresses for student groups or short-term visitors and enough table space to host dinners with local villagers.

I walked outside with Siiri, around the manor buildings. I had never seen such a place. Forming a square, the old manor had been the main farming centre for the local farmers for centuries, but maintained the unequal distribution of power between the Baltic-German Manor owners and the Estonian local farmers. History seemed overwhelmingly present. I felt naive in my own personal experience of Icelandic fishing villages, where instead of foreign lords and ladies, the people depended on fish and the weather to survive.

Siiri told me that MoKS was located in the old “governor’s” house, and that Evelyn had come up with the idea of the restoration of the old Mooste Manor.  There are still a couple of buildings not yet in use, and I tried to imagine coming to Mooste when the whole manor was in ruins.

Siiri told me about when the local people were farmers, located far from each neighbour, forming a circle around the manor.  Coming from Iceland and partly growing up in a little fishing village, the social structure of the farms and manors was as foreign to me as the Soviet block houses.  Icelandic fishing villages normally grow out from the shoreline, and modern freezing factories are built by the harbour.  I recalled being a teenager, when we all got summer jobs packing lobster for freezing.  At that time, the lobster had not yet been over-fished, and every possible working person was needed to get the catch ready for freezing. This included young teenagers, as I was twelve when I got my first summer job and fourteen when I vowed never to work in a freezing factory again.

The striking difference in architecture and social structure, both from what I knew and also from the two main structures seen in Mooste, stayed with me when I returned to the residency almost a year later.  This time I came to stay as an artist-in-residence, working on my doctoral research on the social value of artist residencies in rural areas.  Siiri was now expecting a baby, and I had accepted the offer of bringing a family member with me, so I was happily accompanied by my ten-year-old daughter.

In MoKS, I had a lovely big bedroom, with a separate large studio space.  I mainly spent my time writing and reading, using the floor space for my extended notes and drawings, kept on an endless roll of paper.  My daughter spent a great deal of time creating a paper doll family and together we walked around and tried to understand the history all around us.

“Mommy, when did the communist stuff start?” my daughter asked one night.  “Well, this was probably after World War II”, I replied, uncertain of my historical facts.  “But mommy, was it right after, like the day after the war ended, or were there some days in between?” she continued. Again, facing my ignorance about the history of this country that is only three hours flight away from my own, I tried to answer her question: “I am not sure. Probably not many days.. perhaps none… why do you ask?”  “Well, mommy, how can we say that the war ended here if the people were not free?” my ten-year-old asked, with her clear insight into the “rights and wrongs” of nations’ histories.

I thought about this. Could we say that World War II had not ended here until 1991, when Estonians regained their independence? I thought about the cultural isolation brought on by power structures. Then I thought about other sorts of cultural isolation, brought on by geographical isolation. In Iceland. When I was growing up, the national television station was the only one. They broadcast briefly in the evening, six nights a week, with Thursday nights off. Summer holidays were also needed, so television shut down for a month during the summer. I remembered the thrill when the first American TV series was broadcast in Iceland and wondered if glasnost had also opened up the possibility in Estonia of following J.R. from Dallas.

During this summer stay in Estonia the weather was unusually hot, which led to many walks to the local lake, where children and grown-ups joined in play and cooling off in the water. My daughter claims that she learned how to swim there, or at least realised that she could swim. She was afraid in the beginning, and thought that the fish or waterlilies might be mischievous but she quickly got as used to the natural lake as to our geothermal swimming pools back home. Having her with me created a healthy rhythm to my working schedule: we had to attend to lunch and dinner, walks and swims in between my reading and writing. I most certainly recommend bringing a ten-year-old along on a residency.

I felt somehow different when I came back to MoKS for the third time. Every visit has been unique. On my first visit, the resonant feeling was the wonder and admiration of the work achieved by Evelyn and John. That time, after walking around the manor houses with Siiri, I managed to get John to leave the microphone workshop for an hour and sit down with me, Siiri and Evelyn around the kitchen table for a recorded discussion. I was curious. “Who starts an artist residency and why?” “How does it work with the finances?” “Whom is it for?” “How do you select visitors based on the applications?”

The interview was valuable, not only in order to know more about MoKS, but as the first step in my PhD research on artist residencies in rural areas.

My second visit was very focused on the historical and geographical surroundings. Lake Mooste, warm enough to swim in. Trees shaping the horizon, rather than mountains and ocean, like back home. The experience of letting go of tasks brought from home, allowing myself to be influenced, to be interrupted even, by the space and place. Enjoying the large working space of the studio floor, compared to my normally limited office desk. Giving up on speaking English in the little grocery shop, and opting for Icelandic instead: “Góðan daginn.  Já, takk, eitt súkkulaði líka. Takk kærlega og bless,” with a smile. The second visit was the time when I read the publications by MoKS, about the PostsovkhoZ and GROUND projects. I also looked carefully through the MoKS blog, learning about community-affiliated projects that artists have worked on here. Ironically, the thought occurred to me that every visitor was surprised in the same manner. We all felt like outsiders in terms of social history; wanting to understand and become a part of it, we created projects that addressed something we had looked into personally.

Autumn is the time of harvest in Mooste and MoKS. I learned this through the futility of my store-bought apples next to the orchard apple trees swaying with the weight of their fruit.

This third time I was alone and sometimes my days, spent with my pile of books and at the computer, were lonely. The curiosity and excitement of the summer faded and even the ruins of the old Sovkhoz buildings had grown familiar to me.  Instead of struggling with the question of what the social value of artist residencies might be, I started reading Hannah Arendt and Jerome Bruner. Instead of walking around taking photos in awe, I started doing pencil drawings and portraits of people from photographs.  Life in the residency started to become routine. I was ready to return home.  What had been strange became familiar, the questions subsided, and my mind travelled north, home to autumn storms and rainy darkness. I would return home with work done and interviews recorded. My research on artist residencies will be completed in the unforeseen future, but I have a feeling that the experience of being in MoKS will always remain a favourite, a place of beginnings, wonder and awe. 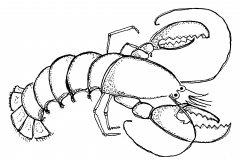 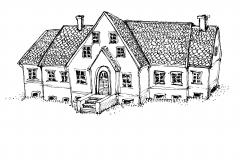 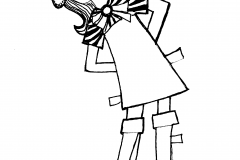 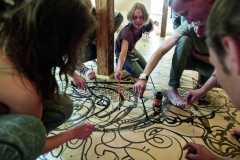 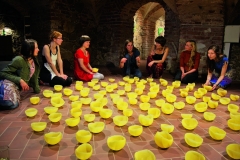 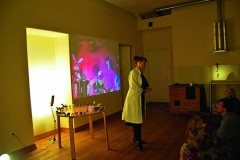 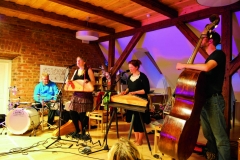 MoKS is a non-profit artist-run project space in Estonia, situated in the rural community of Mooste, southeast of Tartu. MoKS offers an international residency program and a gallery, as well as symposia, workshops and community events.

Gunnhildur Una Jónsdóttir is a PhD student in the University of Iceland. Her background is in fine arts, but she works now within the School of Education, researching the social cultural value of artist residencies in rural areas.
gunnhildur.una@gmail.com