The triennial drives graphic artists to the barricades! Possibility of politicizing art

The subtitle, Political/Poetical of the 14th Tallinn Print Triennial, borrowed from the Documenta X (1997), is exceptional and expected at the same time. It is exceptional because an official and quite ‘bourgeois and conservative’ large-scale art venture so directly turns to topicality, engagement and politics. This, however, also makes it rather likely: demand for political art is on the increase throughout the world, including in Estonia, where 40 years of forced politicizing of art has caused many to oppose the idea. What traditionally used to belong, at least at its moment of birth, outside the institutional boundaries of art is tackled by institutions. Institutions commission artists to produce political and social works and projects which deal critically with the current state of affairs. Politics has become one of the main arguments legitimating contemporary art, justifying the necessity of art in society. Apolitical attitudes, on the other hand, are regarded as inadequate, even arrogant, eg the unanimous criticism of this summer’s Documenta XII. In a world dominated by neo-liberal ideology and populist politics, this particular position of art seems impossible to many. The triennial’s thematic focus on the possible points of intersection of the political and artistic (poetical) practices thus precisely captured the trend of the era. 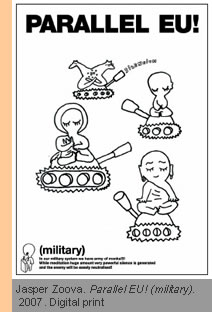 Anders Härm, author of the general concept, shrewdly finds politics in the otherwise rather anachronistic history of the triennial’s medium, taking graphic art to its own revolutionary moment of birth. Härm tackles ‘political’ and ‘poetical’ as two key characteristics of graphic art. The starting point is the idea of the political coded into graphic art, its significant political function directly derived from the possibilities of the medium: graphic art can be easily and cheaply reproduced and thus quickly circulated. In the service of reformation, the reproducible prints became an essential means in the political struggle. This historical perspective of graphic art as an enlightening and anti-aesthetic practice that appeals to the imagination of people/masses rather than the taste of the elite or the norms of power provides the triennial with an intriguing dimension. The invention of the printing press started a specific resistance-culture, which later gave rise to political graffiti, the Adbusters movement etc, creating new, or upending existing, identities and their representations. The history of the triennial fits into this tradition as well: on the web site of the triennial we can read that its birth in the significant year 1968 was ‘politically motivated’: graphic art, which in the hierarchy of Soviet arts occupied a secondary place compared with monumental art, sculpture and painting, became fertile soil for the growth of new, alternative ideas.(1) As a ‘small’ and intimate medium that held no interest for Soviet art ideologues, graphic art became a means of resistance that, together with graphic design, provided the occupied nation with an identity and a sense of dignity.(2) Finally, prints represented Estonian (non-official) art in international (East European) art. Graphic art could be reproduced and posted abroad.

The poetical backed the political. Härm understands this rather vague characteristic of graphic art, which could indicate the aesthetic, the opposite of politics, in the meaning of Russian formalists: poetical (language) as a deviation from the norm (ordinary language) becomes the critique of the norm, thus revealing the normative. Poetical language contains political potential. Thus art (in the given context, graphic art secondary to ‘big art’) automatically becomes political, a ‘weapon’ of criticism and political struggle, “that helps to shift and reveal power relationships”.(3) This is even more radically expressed by Eha Komissarov in her contribution to the catalogue, The Culturalization of Politics. She quotes Slavoj Žižek, based on Walter Benjamin’s ideas of politicizing culture and art, through which she replies to the general culturalization of politics as a strategy of liberal multiculturalism, presenting it as a proclamation, almost a demand on artists.(4)

What, however, was the triennial’s own political/poetical practice, as it was conveyed by the triennial exhibitions? The obligatory Baltic display was replaced by the exhibition 1987, put together by the Swedish curator Anders Kreuger from various museum collections in Estonia, Latvia and Lithuania. The idea of arranging a triennial that could have happened in 1987 in Soviet Estonia, was witty and intriguing, and raised expectations. Soviet graphic art (like post-Cold War East European art in general) urgently needs a fresh glance and untraditional interpretation, which could help it to shed the clichés attached to it, such as, paradoxically, the political nature of the poetic, interpreting the idiosyncratic expression and extreme aesthetics as the language of opposition. The exhibition in Kumu related to the graphic and poster art of the time not analytical-critically or theoretically, as promised, but instead affirmatively, but the resulting potpourri probably describes the exhibition reality of the time much more precisely than any lofty explanatory text. Showing reality as it was, without tracking down the avant-garde tendencies in it, which would suit our present understanding of interesting and progressive art, Kreuger repeats the already mentioned axiom of the politics of the poetic in Estonian graphic art. In reference to Estonian (and East European) ‘unofficial’ art, its occasionally extreme aestheticism is often regarded as a political choice: non-participation as an ethical gesture. This is one of the central models in its legitimization as avant-garde art. Still, poetic language does not automatically function as a political agent, and not at all in the sense that the triennial’s ideologue Härm would like. Graphic art and poster art (seen at the exhibition 1987) seems to function the other way round: not undermining, but producing consensus. The triennial born in 1968 helped to secure the identity of the Estonian national intelligentsia, at the same time expressing its consciousness. As an aesthetic practice, its role was appeasing and regulative, rather than critical or revolutionary. The triennial signified the establishment of elitist culture, representing the ‘pedigree’ of certain Estonian art: “The main point was to always make Baltic prints look ‘less Soviet’ than prints from Russia or the other eleven Soviet Socialist Republics”, writes Kreuger in the catalogue.(5)

1987 seemed to continue on the upper floor of the museum, with the main exhibition chosen by the international jury (although it is difficult to imagine the political criteria on which the jury relied). Kreuger’s display showed the ‘good art of the Baltic countries’ in its ideological and political modesty, whereas the main exhibition resembled what we had been told about Soviet-era official exhibitions and their ideological role. Not a bit less enthusiastically than the previous propaganda-artists, the graphic artists showed us the evils of the world: consumption, media, loss of individuality and intimacy, commercialising culture, surveillance, violence, war etc. The commission of the triennial – relating to the topic of the triennial is obligatory – produced numerous superficial and poster-like comments and ‘revelations’, but it was difficult to find imaginative works that could convincingly relate to the problems.

At the triennial exhibition in the Art Hall, curated by Härm, the concept was demonstrated in works where the strategies directly derived from the revolutionary history of graphic art, eg collages. Also there were heaps of newspapers and leaflets. As a symbiosis of the political and the poetical, some of them were glued to the white walls of the exhibition hall. Everything was as it should be: correct (assiduously political), and boring. Only Jakob Kolding’s poster made it into the urban space. Its conscious, although somewhat trailing, question Have there been any attempts, through planning, to either discourage or promote certain patterns of behaviour in your neighbourhood? (which/how?), and a restrained design in grey shades vanished into it. Posters of the Elfriede Jelinek School of English Language, Produce or Die, that almost at the same time appeared in the city space addressed the position of today’s art producers and institutions in the field of political and ideological struggle much more effectively and radically. I, nevertheless, do not think that the main problem of the exhibition was simply that the ‘white cube’ neutralises all political aspirations and manifestations, making them harmless and unconvincing. I agree with the frequently repeated thesis that sees the art space as a specific, (relatively) free platform, where it is possible to distribute alternative information and knowledge, and where marginalised groups in society can have a say. This exhibition, too, provided a lot of sensible and enlightening material, such as the St Petersburg newspaper What Is To Be Done? (three issues) or the publication titled Road Work by Berlin-based Michael Baers from America on the topic of the Iraq invasion. The Rumanian artist Dan Perjovschi’s series of drawings Press Stress (Cyprus), first published in a newspaper, was devoted to the Turkey-Greece conflict in Cyprus. The artist duo Johnson and Johnson from Estonia portrayed the independent candidates who participated in the 2007 parliamentary elections, “a kind of curiosity on the otherwise tidy body of the representative-decorative democracy”(6), the minority, as it were. (Which does not mean that the video clips of the eccentrics, overwhelmingly comical, were an expression of the author’s critical attitude.) Politically, everything at the exhibition was ‘correct’. However, does the question lie there, or in the position of critical and political art in the world conquered by cultural tourism, which increasingly desires political art? How to deal with political and critical practice in a situation where art institutions are reduced to a (loss-making) part of the entertainment industry? I am not accusing anyone of using a situation to his own advantage, or of not taking to the streets, as if this were an ‘authentic’ place for resistance. The triennial undoubtedly had its own noble purpose, but there was no critical relationship to its own position. When Benjamin talked about the necessity of politicizing art, he also included his own position.

Connections between art and politics were tackled by Hanno Soans’s work Victory Day, which, intentionally or unintentionally, was ironic towards the exhibition. It consisted of two video projections: one showing the celebration of Victory Day in Tõnismägi, in front of the notorious sculpture of the ‘soldier-liberator’ (removed in April 2007), and the other, opposing the first, showing Soans’s action at the monument of the writer A. H. Tammsaare, where the pedestal was covered with green apples marked with swastika-stickers. Soans thus introduced the central (and hottest at the moment) social, national and political conflict in Estonian society into the exhibition hall. The empty canvas, the third part of the installation, seems to question whether it is possible to say something decisive about this conflict in the language of art, without merely reproducing it.(7)

In conclusion, I think the problem – what happens when a (mega) exhibition takes politics as its slogan and invites artists to become political – is much wider. (I will ignore the question of whether it is sensible to organise a huge exhibition focusing on technology, and hope to update oneself only by means of a topical theme.) This was eloquently demonstrated by the 10th Istanbul Biennial last autumn: Hou Hanru’s arranged and militant concept, quite engaging overall, but in individual works it quickly became one-dimensionally propagandistic and banal, full of ‘little political pictures’ (Brian Holmes). We do not need political art, but artists, as well as institutions, who would make art politically. The ‘political function’ of graphic art, within the framework of the print triennial as an institution, was never tackled, although it would have been a suitable topic for the panel Political/Poetical. Especially curious is the fact that the triennial gives awards (another form of politics). However, what are the criteria for a political/poetical work: its impact, performance or ideology?

Mari Laanemets
(1975), art historian, studied art history at the Estonian Academy of Arts and the Humboldt University in Berlin. Writes about contemporary art and Eastern-European art.