The Textile Artists´ Vision in the Tallinn Art Hall

Alongside the works of established artists, notably recent tapestries by Mari Adamson, the grand old lady of Estonian textile art and Professor Emeritus of the Academy of Arts, works by younger artists, students and graduates of the Academy, were also on display. For example Tarmo Mäesalu‰s authorial technique textiles and Reet Sepp‰s small witty tapestry kisses.

The openness of the exhibition‰s curators Katrin Pere, chairman of the Association of Textile Artists, and Kadri Viires, and the jury of five members, is reflected in the participation of artists from outside the Association. The painter Kreg A-Kristring‰s objects from his recent exhibition Venice, Kadi Kurema‰s Dress with printgraphic elements, the experienced master of ceramics Leo Rohlin‰s vision of textiles etc. 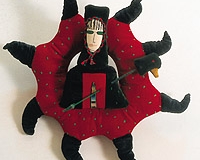 During the open 90s, Estonian artists have had many opportunities to become acquainted with comtemporary visions of textile art in Nordic countries and elsewhere in Europe. Among the textile and paper exhibitions which have indirectly influenced Visions, mention should be made of the International Triennial of Applied Art, titled Useless Things. The triennial in the Tallinn Museum of Applied Art contained conceptual works of art which interpreted the meaning of textile art, its self-definition and the boundaries of the phenomenon quite widely. Despite the variety of materials used ­ paper, leather, plastic ­ Visions stayed within traditional limits. The more conceptual side of the exhibition was downplayed and integrated into the exposition which was mostly based on Modernist tradition or allusions to it. A few years ago, the same Art Hall gallery housed a topical textile exhibition called Writings, with one of the key words being transparency. In the opinion of curator Katrin Pere, several artists elaborated on themes of that exhibition.

Besides being impressed by the glamorous general view of the first halls, where exotic rolls of silk and veils were displayed in abundance, the viewer could perceive intimate connections with everyday life and man‰s personal sphere, presented and made aesthetic in various ways. Considering the general conception of applied art, this was especially refreshing. Merle Suurkask‰s huge painted photo motifs on silk, so fashionable these days, invoked the world of personal recollections, as did 101 Correlations by Erika Pedak who was awarded the title ‰Textile Artist of the Year‰ and who is shortly going to take part in the ¸ódê triennial of tapestry art. 101 Correlations exhibits intimate documents and extracts of letters in transparent pockets.

Some works seemed almost to blend into elements of the exhibition design. For example, Signe Kivi‰s world of building ­ aestheticised scaffolding, and Kaire Tali‰s ironic­romantic apparatus where the fabrics seemed to try to leave the room by a rope ladder leading nowhere. The embroidered pin cushions by Lylian Meister, head of the Department of Textile Art at the Estonian Academy of Arts, represented the positive relationship between a feminist and a craftsmanlike treatment of art, attracting attention in the otherwise peaceful context of the exhibition with their witty refined naivism.

The laureates of the exhibition ­ Ülle Raadik, Maasike Maasik and Elna Kaasik ­ have represented the mainstream of their art for years. The plentiful woven woollen carpets demonstrated the strength of tradition in contemporary Estonian textile art. This markedly utilitarian, expensive, and time­consuming aspect of textile art requiring highly professional handicraft skills, is still widely practised in Estonia and dominated a significant part of the exhibition area.