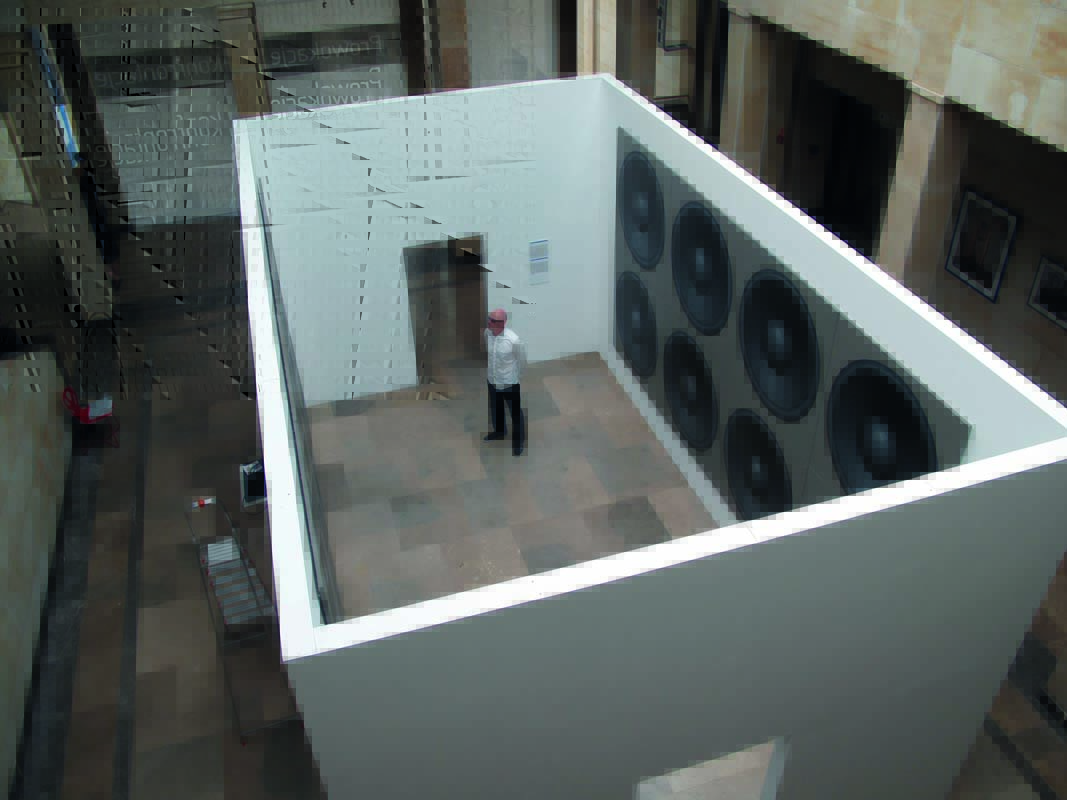 National exhibitions are what museums and galleries like. However, what we often get under the slogan ‘national exhibition’ is a simple ‘ticking off’. Usually, it is the art of less known countries, regarded as provincial artistic-wise, that is shown, and sometimes such exhibitions are the result of a courteous diplomatic exchange. They always carry the danger of succumbing to the temptation to show ‘the best of’, which usually means a hotchpotch of works that, while artistically sound, have little in common besides their country of origin. The curators of The Art of Estonia, shown first at the National Museum in Szczecin and then in Warsaw, try to avoid such conventional thinking about presenting the art of their own country abroad. What makes their situation easier is the fact that Estonian art is not completely unknown in Poland.

The two countries have a long tradition of cultural contacts. In the 19th century, many Poles came to study at the University of Tartu (the city then being known as Dorpat). During the inter-war period, several exhibitions presenting the art of the two countries took place as part of a mutual exchange between Tallinn and Warsaw, the two largest of those in the 1930s. First, the newly opened Tallinn Art Hall held an exhibition of the works of some of Poland’s most outstanding artists of the period, including the sculptors Xawery Dunikowski and Henryk Kuna, and the painters Bolesław Cybis, Antoni Michalak and Jan Gotard. Then, in 1939, President Ignacy Mocicki opened an exhibition of Estonian art at Warsaw’s Art Propaganda Institute, featuring works by Kristjan Raud, Eerik Haamer, Eduard Wiiralt, Ants Laikmaa and Andrus Johani, among others. Unfortunately, avant- garde art was not featured in either of the shows. In recent years, the Polish-Estonian cultural exchange became intense again. The Art Museum of Estonia, held several presentations of Polish art, while the work of Estonian artists was shown in Poland in smaller national exhibitions or large international group shows. The most important of those were Personal Time. Art of Estonia, Latvia and Lithuania 1945–1996 (Zach ta Gallery, Warsaw 1996) and Closing the distance: images of the body in contemporary art from Estonia (Ła nia Centre for Contemporary Art, Gdansk 2002).

The Art of Estonia has a characteristic time frame. The show’s first part, Adapting Modernity, encompasses the first half of the 20th century, and the second part, Provocations and Confrontations, begins in 2000. Such a choice may stem from an unwillingness to show art created in the Estonian Soviet Socialist Republic, a period that still needs to be thoroughly researched by art historians, its history yet to be rewritten. Another reason may be the fact that Estonian art of the 1990s has already been presented in Poland in sev- eral larger and smaller exhibitions, including, partly, the above-mentioned Personal Time.

The Art of Estonia can be treated as two separate shows that enter into an interesting dialogue with each other. Modernism and the present time and their two different approaches to art – adapting international trends to the national tradition versus using the contemporary artistic language to question reality – highlight the paradox of such provincial countries as Estonia and Poland, which succumb to cultural self-colonisation while trying to maintain their distinct identities. Eha Komissarov writes in the exhibition catalogue about the ‘postcolonial’ attitude of young artists who reject the invasion of Western ideas and values, trying to focus on themselves instead. However, it needs to be remembered that the artists she mentions do participate in the international art market after all, which means that, willingly or not, they have to play by its rules. They also use a system of signs and meanings developed in and by Western art. 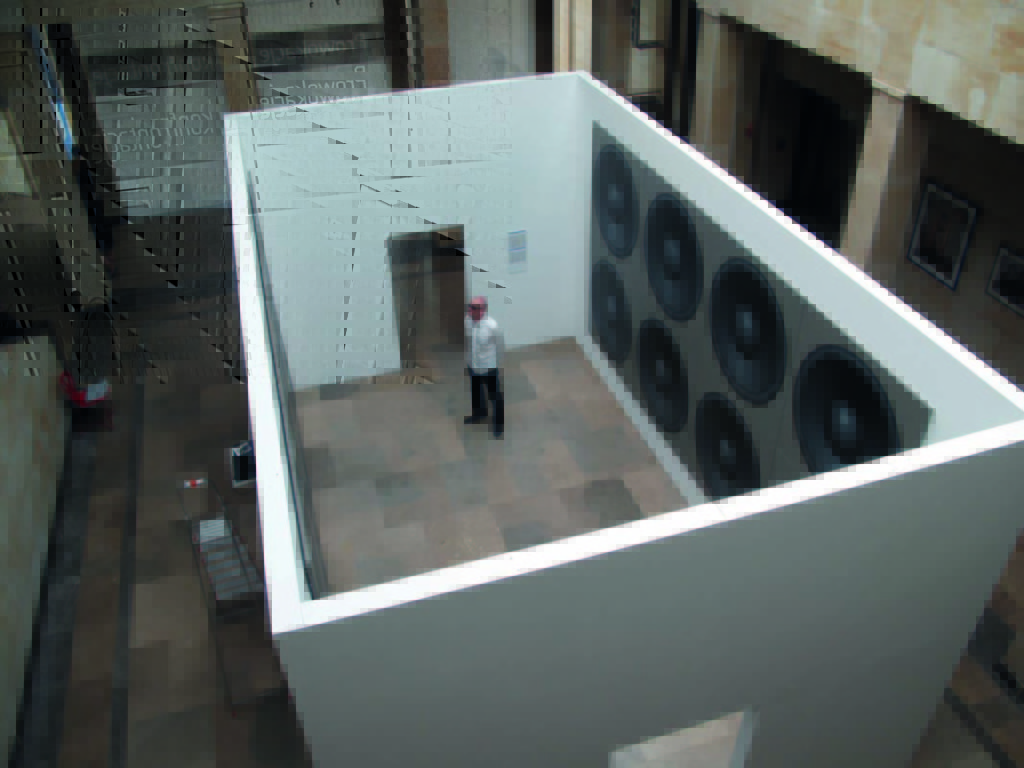 Adapting Modernity has been arranged as a separate presentation enclosed in a kind of frame. When entering and leaving the exhibition, the viewer is led through small rooms where archival photographs from Estonia are displayed. At the entrance are photographs from 1913-1915, showing very poor rural areas not yet reached by modernity. The selection provides the exhibition with an interesting context, presenting Estonia as a poor and backward country. Then the viewer is confronted with the work of artists living in such a reality and yet familiar with the most modern trends in art. Several photographs in a similar vein are presented in a small room at the end of the exhibition. Beside them hang photographs from the 1920s and 1930s, showing preparations for a party, a racing car, a popular singer performing, oil tanks, and the beach in Pärnu, with elegant sunbathers posing for the camera in the company of two young black men: the symbols of modernity, basically, defined those days through the rhythm of machines and jazz music. The exhibition’s structure, the choice of the works and the title all make the viewer aware of Estonians’ determination to absorb the most important European trends, if only in the sphere of aes- thetics. Although avant-garde trends were adapted on a rather superficial level by artists, the result was still a kind of dialogue between modernity and tradition.

In Provocations and Confrontations, a typically postmodern shift takes place towards pluralism and issues not dealt with before, such as feminism, nationalism, homosexuality and opposition to the Western monoculture. As Edward W. Said writes in Culture and Imperialism, postcolonial nations desperately
affirm their civilisational distinctness, which manifests itself as a rebellion against imperial cultures. Adorno discussed the attitude in the context of his negative dialectics. Examples can be found in the works of Kristina Norman, Mark Raidpere and Marge Monko, and in the project The Gas Pipe. Komissarov’s words on artists’ postcolonial attitude and her stressing, in both the exhibition and the catalogue, of Estonian art’s authority-questioning role fit in the broader experience of Estonia’s regaining her independence, achieving a status quo with the Russian minority, joining the EU and the euro-zone and, more recently, struggling with the effects of the global financial crisis. All of which has also brought about changes in the status of groups previously discrim- inated against, such as women and homo- sexuals. In this context, we find an interest- ing juxtaposition here of two manifestos of female independence, Monko’s work, where women factory workers discuss feminism, and the performance by Jõgeva, who tattoos a space for lovers’ names on her left breast, and between them, its meaning enhanced as a result, Mäetamm’s Little Dramas, where intimate household tragedies gain an extra sense of dramatic tension. This is because the experience of the victims of domestic violence, just like that of prisoners, presented by Toomik, is very seldom dealt with in the art discourse. Such persons do not speak up for themselves either, which only increases their social exclusion. 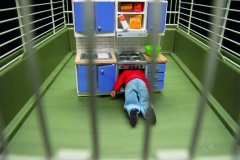 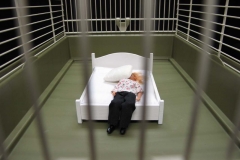 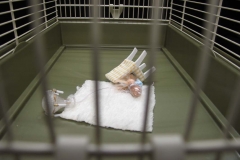 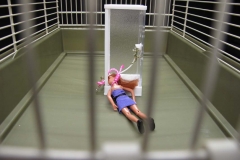 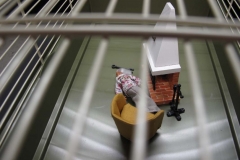 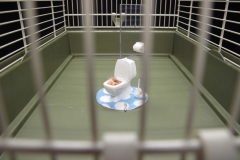 But do the featured works really provoke? The sex- and violence-filled language of the contemporary media means that the viewer can hardly be shocked or thrown off balance any more. It also needs to be noted that provo- cation is not something confined to contem- porary art. Though hardly identifiable as such today, it was also present in older art, includ- ing that presented in Adapting Modernity. Karin Luts’s 1930s paintings of emancipated women or Konrad Mägi’s Portrait of a Lady (certainly no self-respecting lady would have allowed her- self to be portrayed in a state of undress) may have been perceived by contemporary viewers as far more provocative than contemporary works are for us.

What may appear provocative to the Polish viewer is the use of national colours in the design of the exhibition space, particularly evident in the Adapting Modernity part. While the combination of black, white and blue is doubtless very attractive visually, it needlessly dazzles the audience with national symbolism, which in Poland evokes rather pejorative associations with the far right and ultra-conservatism. In the smallish space of Provocations and Confrontations, the viewer is exposed to a cacophony of overlapping multimedia pieces and to a crowd, which, paradoxically, benefits the paintings of Kaido Ole. In the cube specially constructed for him, the viewer finds an opportunity for a breather and, quite unexpectedly, silence and harmony.