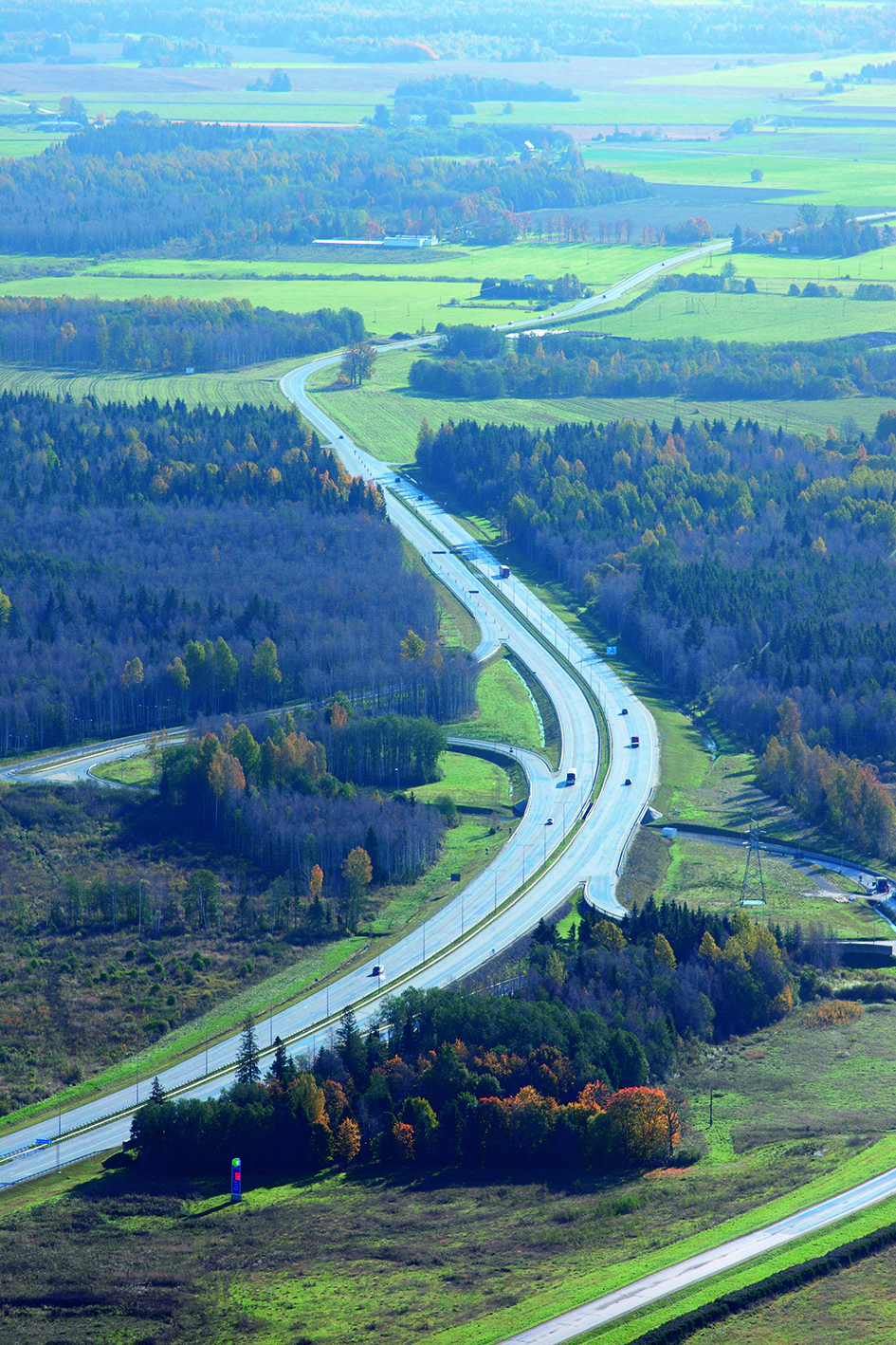 The meaning of crossroads in Estonian folk belief

According to Oskar Loorits (1900–1961), the classic of research into folk belief, Estonians have always considered roads to be dangerous. When a traveller found himself on the path of spirits, the devil, the Old Nick  or other supernatural creatures, he invariably lost his way and had to face uncomfortable situations. Belief-related tales of supernatural experiences on the road occur throughout history. The 19th century described ghostly carriages that raced along major roads at night and scared people; post-war horror stories included black lorries used for human-hunting by demonic strangers; today there is talk of mysterious cars which suddenly appear on dark roads with the screeching of tyres and then vanish into the night. It has always happened that someone setting out on a journey along a road has disappeared without a trace.

In the beliefs of settled peoples, longer journeys are associated with a sense of fear and danger, which they try to overcome with various customs. Slavery supported permanent settlement and the kind of work and undertakings that did not take people far from home. Monotonous everyday life was enlivened by journeys undertaken in fairy-tales and the fantasies of runic songs, where the hero has adventures in distant lands and foreign kingdoms. When a heroine sets out, for example to look for her lost husband, her journey is often full of suffering and mishaps. Folklore confirmed gender roles, where a woman was more trapped at home, whereas a man could travel around more freely. At the end of the 19th century the social situation changed; the developing urbanisation, improved economic conditions and a school system, as well as an increase in Estonians’ wealth, made life move faster. New contacts were established and a national movement got under way, which amongst other things was evident in the traffic on Estonian roads. However, the Estonian folklore of the late 19th century and early 20th century reveals a world of settled country people, who knew their home surroundings to the last detail, but whose insecurity grew when they had to leave  familiar grounds.

/…/ Any longer journey was connected with dangers that required preparation well in advance. People knew various magic and religious rituals which were supposed to help them return home safely. Silver and salt have been extensively used in Estonian folk belief to defend against evil forces, and it is not surprising that these substances also occur in preparations for a journey.

Before someone set off on a journey, he put some salt inside his gloves and walked three times around his house, so he would return home safely.
E 32483 (46) < Jämaja (1897)

The sign of the cross was a popular Christian means of protection in Estonian folk belief.

Various unwritten laws, customs and habits were also associated with a journey, which shows that Estonians used to pay attention to many details that modern people would not even notice. In the magical perception of the world, everything is connected with everything else and careless actions can lead to unwelcome results, even disasters:

You must not walk in wheel tracks: whoever does that causes the death of his mother and father, because you are walking on your ancestors’ eyes.
RKM II 37, 335 (16) < Tallinn (1949)

Because of its ambivalent meaning, the crossroads in Estonian folk belief can be compared with such religiously significant places as the sauna, cemetery or sacred grove. Many supernatural things could happen there, especially when people broke the usual norms of behaviour. One had to be especially careful at a crossroads:

No one dares stop at a crossroads on a Thursday evening – least of all at the hour of ‘ghosts’ (midnight), as the Old Devil himself might appear in a whirl of wind. For that reason many people are afraid to walk the road at night.
EKnS 37, 18 < ? (1906)

Matthias Johann Eisen (1857–1934), the tireless collector of Estonian folklore and one of the initiators of scholarly research on folk belief, tackled the meaning of the crossroads in his study The Offerings of Ancestors (1996; 1st edition 1920). He wrote that regarding crossroads as sacred did not reach back into the pagan period, but “it must be certainly seen as dating to the Catholic era. The Church of Rome saw the cross as holy everywhere. As a crossroads also has the shape of a cross, the monks and priests pointed this out to people”.

Eisen, well-versed in Estonian heritage, was however mistaken here, as it is unlikely that the crossroads acquired its religious significance only in the context of Christianity. Martin Puhvel, an Estonian folklorist and literary scholar working in Canada, published a monograph in English entitled The Crossroads In Folklore And Myth (1989). It shows the worldwide spread of the theme, not at all limited to Christian culture. He wrote: “In the folklore of many countries, crossroads are associated with various appearances and mischief of mostly scary ghosts, witches and demons. Mystical supernatural phenomena occur at crossroads and all manner of magic rites are carried out. It was an old custom to bury suicides there.” Crossroads are sacred places, where small sanctuaries are set up in many cultures: stupas in Buddhist countries, and crucifixes and figures of the Virgin Mary in Catholic countries. Ferdinand Johann Wiedemann (1805–1887) wrote that when Estonians came to a crossroads in the morning, they had the habit of crossing themselves and saying “God the father, dear Son, Holy Spirit”, so that the devil would not stop the traveller and his horse.

According to Martin Puhvel, the historical and psychological beliefs and fears linked with crossroads rest on ignorance and a sense of confusion about what might happen to someone at a crossroads. The possibility of making a mistake was huge and much depended on making the right choice.

The following belief shows that finding the right way could be quite straightforward:

When the road forks and you are in doubt as  to which road is the right one, spit in your palm and slap it with the index finger of your other hand. Follow the direction where most spit splashes.
ERA II 9, 37 (12) < Käina (1928)

Since the crossroads was a magical place, it was possible to get in touch with demonic powers, practise witchcraft and predict the future, the latter being especially successful on New Year’s Eve:

On the night of the new year, girls brought some snow from a crossroads, and when it melted they checked to see how pure it was; if it was pure, the coming year would be good, and if it was dirty and soiled, the year would be bad.
ERA II 31, 380 (167) < Märjamaa (1930)

The devil himself was called on at crossroads and contracts were signed with him there, even if only to make a kratt, a demon who stole and brought food, money and other worldly goods to its maker and owner, thus making you rich at the expense of other people:

To make a kratt, you went to the crossroads on three Thursdays and gave three drops of blood from your index finger to the devil. After you had given the blood, you were in his power, and when you died nothing remained of you but three drops of blood.
RKM II 363, 342/3 (12) < Otepää (1982)

If anyone wanted to call the devil, a crossroads at night was the best place in Estonian folk religion. Unexpected and unwelcome encounters with the Prince of Darkness often occurred on the road. The devil was occasionally in a terrible hurry, racing to claim the soul of a suicide or another sinner, but he would still stop his carriage, and invite the traveller to come aboard to ease his journey. Although sometimes the traveller escaped from the encounter with the devil unharmed, such incidents were still mostly unpleasant and dangerous. Many tales link beliefs with the social environment via specific witnesses and their friends who convey the experience of others. The tale below suggests that the appearance of devils on the road between pubs is not coincidental. Vodka, pubs and drunks are frequent motifs in Estonian devil folklore. This might explain the case where a traveller cleverly gets rid of his unwelcome travelling companions:

Ado Kanson from the Valtu district in Rapla parish told this story: a man from Valtu was returning from Tallinn, with a sack of salt in his cart. It was autumn, the roads were dismal and the horse was tired. They came to the road between the Selikivi and Hagusi pubs. The horse suddenly slowed down, seemingly out of breath. The man wondered what it was that required so much effort. As it was night, he thought this could be the old devil. The way to find out was to look under the horse-collar strap. So he did and saw a whole array of little horned creatures there. The man recited the Lord’s Prayer, and the creatures vanished.
ERA II 167, 512/ 3 (36) < Tallinn < Rapla (1937)

Much could happen while travelling along roads. People could get hopelessly lost, they could encounter crooks and robbers, and also face supernatural strangers. The excitement, anxiety and fear expressed in many tales can be linked to the emotions experienced by a traveller of long ago who was out and about late in the evening or at night, whose spirit was ready for anything unexpected. The traveller knew he had abandoned the secure home territory and was moving through an alien one. This ambiguous state placed him between the earthly and supernatural reality, and he could count himself lucky if he reached his destination without wandering into a mysterious space revealed in the ghostly darkness of the night. A door into this kind of mystical world opens up the genre of legends; a few examples have been given in the current article. For today’s Estonians, the door is basically closed, as a few examples of such tales are unable to bring to life all the images and encourage associations hidden in old texts. After all, these possible associations and images have largely been forgotten, and the paths of religious thinking are overgrown. However, anyone interested enough to explore can find a fascinating world, where the roads walked in reality lead us into supernatural places and then return us to our earthly reality.

* Excerpts from my correspondence with the Road Administration in March 2013.

Ülo Valk, (1962), Estonian philologist and folklorist, PhD. Since 1995 chair of the Estonian language and comparative folklore at the University of Tartu.