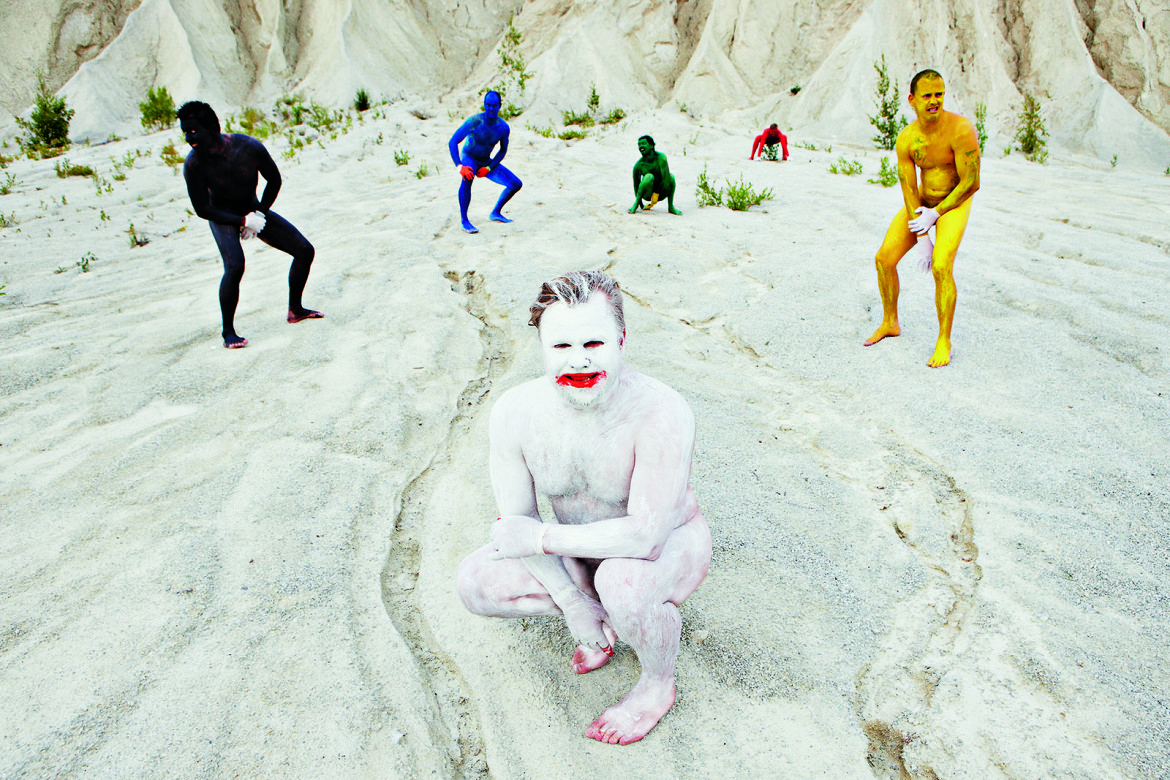 The culture industry of Winny Puhh

Who could have guessed that one of the kitschiest and most ridiculed of TV-show’s, the Eurovision Song Contest, would kick off one of the most talked about shows during a Parisian fashion week? This is exactly what happened when Rick Owens, a Paris-based American fashion designer with a cult following, came across a Youtube video of Winny Puhh, the enfant terrible of Estonia’s music scene.

To be honest, it wasn’t exactly the camp-laden and cheesy Eurovision finals that paved the way to Winny Puhh’s surprise appearance at Owen’s show in June 2013. The ‘big’ Eurovision is long past its musical heyday, if that actually ever existed. But its role as a spectacular show, a hilarious one-night-only entertainment, is stronger than ever.

Years ago, national finalists didn’t even dream of a second life after failing to win the competition to represent their country. The Internet and Youtube have changed the game. Each year, producing a stellar and shocking performance at your national show has become increasingly important. The long-established renommée and huge international fan base of the format incites people to hunt down undiscovered jewels from the national finals, to feed their hunger for new viral sensations at a time when the only fuel for our Internet society is newness. The keywords for such success are: sensational, spectacular, breathtaking and unsurpassed showmanship. The web is overflowing with real musical talent or exceptional vocal powers, but without a great performance a video will never stand out in the vast sea of clips.

Few of them are actually elevated to new heights, and most end up as one-viral-wonder curiosities. Obscurity seemed to be in store for Winny Puhh before Rick Owens, fashion’s dark lord, as some call him, invited them to reproduce their Eurovision performance at his men’s wear show in Paris. 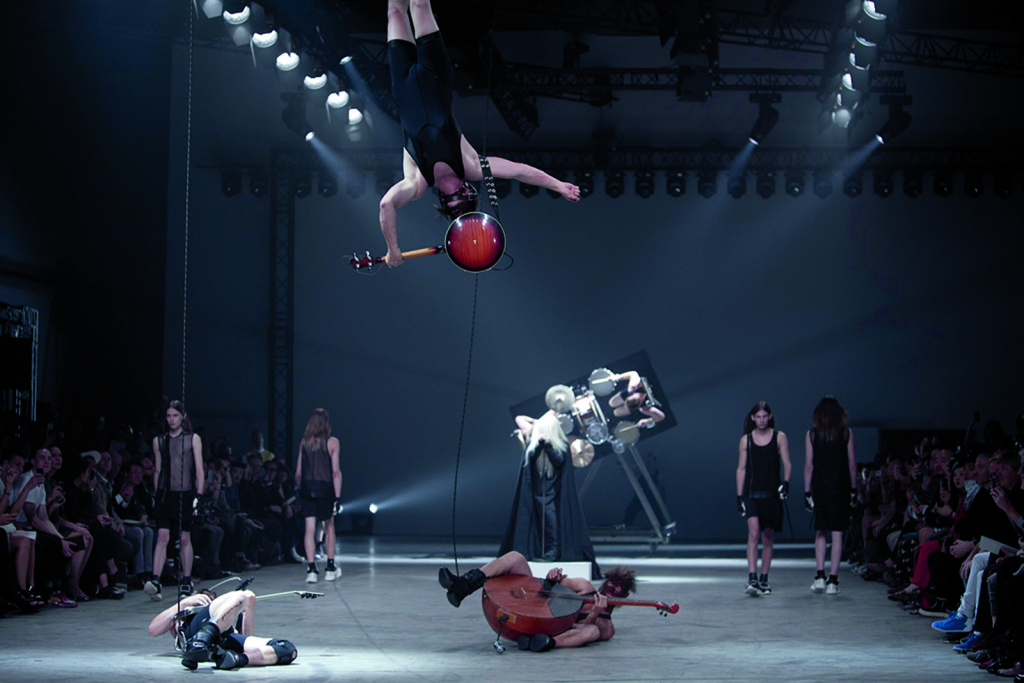 Rick Owens is an LA-raised American fashion designer, based in Paris. Owens and the mesmerizing Michéle Lamy, his visionary-thinking and looking wife/muse/business partner, who champions better than anyone else Owens’ futuristic tribal aesthetics, form one of the most extraordinary, singular and iconic tandems in the realm of fashion. Built on the heritage of ‘80s Japanese minimalism and the ‘90s deconstructivism of the School of Antwerp, and intertwined with gothic detailing, monastic cuts and post-apocalyptic mise-en-scène, the style of Rick Owens is so distinctive that it is often considered a cult.

His style stands aloof from the ever-changing fashion trends and tunnels perpetually into the unvarying vision of its imperturbable creator. Maintaining unaltered integrity in his style and business, not compromising on quality and avoiding ‘easy’ money from perfumes, spectacles or other licenses have ensured Owens a unique position on top of the fashion hierarchy, where one can be placed only by one’s peers.

There are several reasons why the Estonian goblins have entered his equation. The unpredictable and highly visual nature of Winny Puhh’s performances, coupled with their raw and surreal aesthetics, devoid of any pretentions of being beautiful, glamorous or pleasing anyone, manifesting genuine autonomy and not adhering to conventional codes of pop make them genuine and believable. Accompanied by testosterone-laden mischievousness, their performance is a powerful manifesto of the supreme level of personal sovereignty, which is so dear to Owens. You like them or you don’t. One thing is sure: they don’t really care and won’t make any effort to change that.

Winny Puhh succeeded in slashing a hole in Eurovision with their pure expression of Adorno’s and Horkheimer’s concept of the culture industry, at a time when even the most diverse-looking acts seem to have one uniform desire: to please. Winny Puhh has no desire to please – at least not the masses. They are there to make a difference. To express. To shock.

Fashion is visual expression and the identity of Winny Puhh made them a perfect match for Owens, a match that needed just a few tweaks from his art direction to make them fit seamlessly into his world.

Although the visual aspect of the group is essential, their sound was also a necessary part of making their relationship with Owens prosper. Labeled as punk-rock, the sound they produce is as far from mainstream airplay as Rick Owens’ fashions are from conventional codes of fashion and beauty. The dealmaker was their deeply outcast nature, which would never rise to the mainstream, just like Owens’ fashions. Even if a taste for Owens could be cultivated and even though his notoriety is rising, Owens sets a clear barrier with his prices. His clothes are not meant to be affordable and accessible to everyone. His aesthetics require a more complex mindset. You need to be devoted. You need to be not only intellectually evolved to appreciate and understand his universe, but also have the money to gain full access and participation. Although there are no financial restrictions on approaching Winny Puhh’s creation, the intellectual and spiritual thresholds are even higher.

What’s next for Winny Puhh? Will they remain forever under the wing of Rick Owens? Certainly his presence will always shape them, like the Versace pin-dress will always remain with Elizabeth Hurley (perhaps a sacrilegious parallel). But there are ways that Winny Puhh can maintain their independence and free themselves from the burden of this one show.

It is crucial for artists who have made a very strong visual impression to reinvent themselves, as Lady Gaga and Madonna have shown. But not by becoming caricatures of themselves, the destiny of artists who get stuck in and overexploit their breakthrough trick. Being ‘discovered’ by Owens is one thing, but remaining the mere representation of this unique performance is another.

In fact, reinvention is exactly what the group has consciously undertaken, according to their leader Ove Musting, a move to convey a more complex set of representations, and thus ensure their creative autonomy and sustainability. Their latest spread in the Italian Vogue  l’Uomo stems obviously from their Owens fame, but their visual aspect has radically changed. The sensational look of singlets-clad werewolves is gone. This has been replaced by body-painted rainbows. Their reinvention actually began in the shoot for Dazed&Confused, where they appeared with knitted face masks.

What’s next for Winny Puhh? One thing is sure: the boys are full of surprises. The result may fall anywhere between nothing to everything. Time will tell. 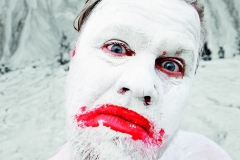 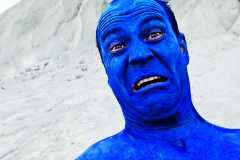 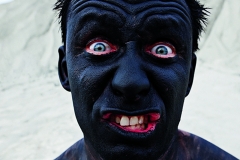 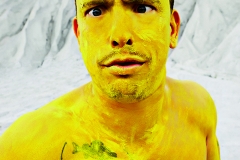 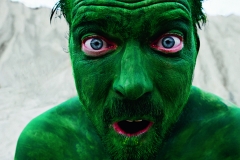