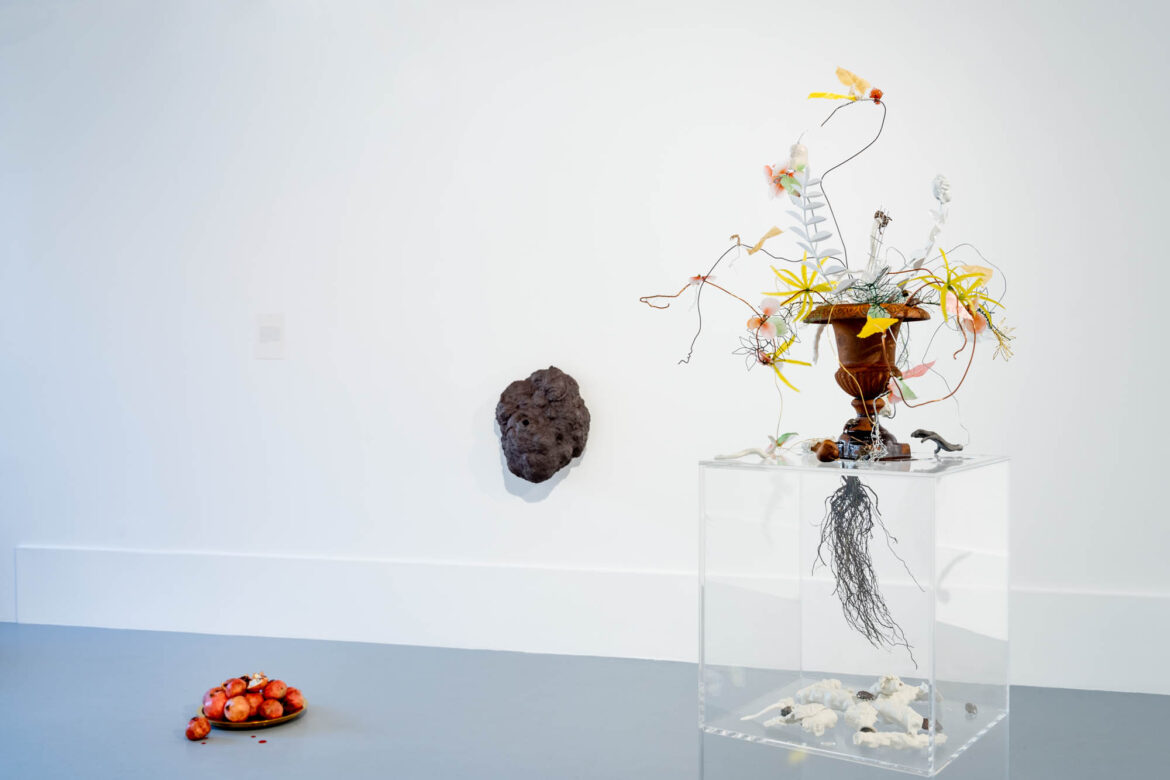 Where is the biomass? It’s hard to detect it in the streets, so I should go into the park. There are many hazy figures, some of them human, some not, but still I cannot find biomass among them. No sign of biomass in the whole panorama. Should I go into the bushes? Well, there are a couple of plastic bottles, empty syringes, a torn pair of tights, but still no biomass visible in the field. I must get on my knees and examine the place closer. Now I can see a tiny creature climbing up a blade of grass. She is so cute, with little green legs, long green antennae and a beautiful flat body. Maybe she is the biomass? However, shouldn’t a piece of biomass be more massive?

But I think I got lost. I have read that today the largest body of vertebrates is constituted by domesticated species – more than half of all the vertebrates on this planet. There is also an extensive mass of human beings, who are busy keeping, feeding, slaughtering and eating farm animals. Us and our pork, our mutton and meat, that’s almost everything made of flesh that is around, and of course, chicken. Besides that, there is also a tiny percentage of wild animals, inhabiting the few refuges left for them, although the refuges evidently won’t last forever. Wild animals are almost invisible today, like the tiny creature I found on the blade of grass. Does it mean that biomass is something else? Or, something that sounds much more plausible: that actually we are the biomass, us and our natural born slaves, the farm animals?

I think this is almost true. We definitely are a considerable part of the biomass, although not the most important part. If microorganisms are included, we won’t be the most significant creatures on earth. Our body consists mostly of alien biomass, small beings with a different DNA from ours because we are symbiotic organisms. But we are blind to this aspect of our being. We imagine ourselves to be an imaginary unity, identifying with the Lacanian mirror image that ‘symbolizes the mental permanence of the I’ and unites it ‘with the statue in which man projects himself, with the phantoms that dominate him, or with the automaton in which, in an ambiguous relation, the world of his own making tends to find completion.’¹ Thus, we fail to grasp our symbiotic nature and tend to conceive ourselves as a castle surrounded by hostile troops, an immune system constantly under siege. But that is just a minuscule part of all the activities taking place inside our bodies and during our interactions with other bodies.

Eike Eplik has made an attempt to represent the unrepresentable: the biomass itself, that has no face, no shape, no name and no place. It is hard to symbolize the concept of biomass, without using a quantitative analysis and statistical diagrams, just as Mehis Heinsaar has said in a text accompanying Eplik’s works: “Secretive, scattered, ambiguous states of mind; strange dreams that evade expression in words and seem not to even belong to the ‘ego’ . . . They may form into ciliates, lizards, beetles, amoebas, humming residents of spiral shells, sedgelings, water striders, water boatmen, or hybrid forms that fall between plant and insect, thus embarking on their own separate lives.” If we imagine the biomass as something alive, not just a row of numbers, it first appears as something formless, a substance without any attributes, but then gradually starts to differentiate itself, so that visible contours, lines and volumes emerge. In one sculpture called Ghost in the Corner, even a mouth with aggressive teeth appears, so that the spectator can suddenly realize: the biomass is no sissy, it won’t passively wait until it will be totally consumed and turned into lifeless matter. Biomass will bite.

What does this mean? First, it means that our concept of a ‘mass’ is somewhat misleading: we picture a mass as something homogenous, without individual traits and certainly without intellect. But mass consists of innumerable singularities. They were there before we came and turned them into a mass, into a pulp or a slime, and they will still reappear – if not altogether alive, then as ghosts of dead beings, as zombies from a new world that was not attended before. And zombies will certainly bite. From a zombie-viewpoint, we are a biomass par excellence because humans do not have individual traits anymore, just the smell of living flesh. This might sound like a joke, but after COVID-19 that joke is not funny anymore. In Great Britain, somebody printed a lot of posters, saying: “Humans are the disease. Corona is the cure.” This sounded terribly cynical at the time (and certainly could not come from Extinction Rebellion, a movement that clearly suffered because of the pandemic), but nonetheless it expressed an unpleasant truth. From the perspective of the virus, human beings are nothing more than an extensive quantity of biomass rapidly spreading over the earth. And this perspective is not worse than our perspective that turns other sentient beings into ‘natural resources’ – into a homogenous biomass.

Second, it points to a general problem in the opposition of human vs. nonhuman. If the nonhuman is defined by a lack of ‘humanity’, then we, the humans, should be something more than the other nonhuman beings, that simply exist without that distinctive feature of ‘humanity’. There is even a word coined to underline our distinctiveness: humanism, that seems to distil the quintessence of everything that is good, noble, intelligent and generous in the nature of the human species, that is definitely not considered to be identical with ‘nature’ by and large. However, this word underwent a terrible inflation during the twentieth century. As the gigantic waves of industrialized war, genocide and mass murder undeniably showed, humans obviously do treat other human beings as indistinct entities, as a biomass that must either be exploited or erased as something superfluous. That’s how humanism became a mockery. Sometimes I have thought that my cat is a humanist because she seems to have such unconditional trust in humans. But I cannot share her feelings: I just happen to know too much about the history of the human species.

In Eplik’s works, the dividing line between human and nonhuman becomes blurred. There is something human in the hanging white porcelain sculptures, although that humanity is not the standardized human form preferred in our civilization. And certainly, these forms are singular, they express something not easily defined but perceptible nonetheless. This might be called humanity without humanism – humanity that has given up the anthropocentric dominance and ventured into the realm of attunement to other beings. Or, to cite Mehis Heinsaar again, “So it may be that the early animal forms this strange state of mind delivers – the lizards, hydras, beetles, and those somewhere between plant and insect – wilfully adopt the sub-layers of the human spiritual landscape as their own, enriching and reviving it with their phosphorising rhizomic roots and decay; with their composting and pupation; with their refertilization and reproduction; thus permanently sustaining that state of mind within us as a sensory primeval forest of possibility.” What Heinsaar is describing here is the Eco gnostic manner of attunement that Timothy Morton has expounded in his book Being Ecological: “Since a thing cannot be known directly or totally, one can only attune to it, with greater or lesser degrees of intimacy. Nor is this attunement a “merely” aesthetic approach to a basically blank extensional substance. Since appearance can’t be peeled decisively from the reality of a thing, attunement is a living, dynamic relation with another being – it doesn’t stop.”² Eplik’s work is a discreet attempt at such an attunement, using the keyword ‘biomass’ as a pretext to a process that annihilates the industrial concept of biomass. Of course, the biomass case is not yet solved by this single approach. But we can see small threads that predict its unravelling in the future.

Hasso Krull (b. 1964) is an Estonian poet who has published fifteen books of poetry and eight collections of essays that include literary criticism as well as writings concerning art, cinema and society.