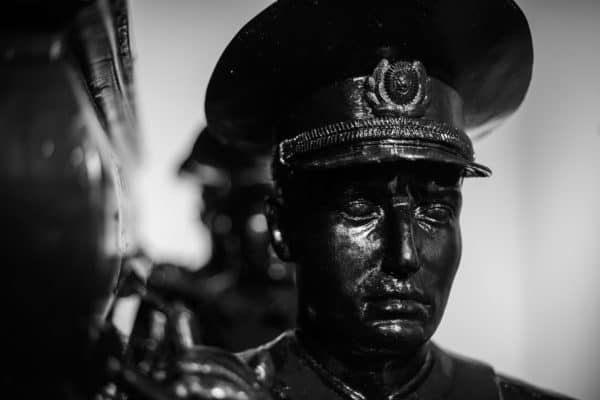 Talking About the Bear in Estonian Art

In October and November of last year, Tartu simultaneously hosted two solo exhibitions in different venues. Overtly political, both dealt with subconscious fears of the large neighbour to the east, Russia. Although art in Estonia is constantly exploring society and politics, most of it looks at the state itself and investigates themes that affect artists. Tanja Muravskaja’s photo installation “Hero” (Tartu Art House, 19 October – 12 November 2017, exhibition design by Yevgeni Zolotko, curated by Indrek Grigor) and Art Allmägi’s installation “Paint It Black II” (Tartu Art Museum, 29 September 2017 – 14 January 2018, curated by Joanna Hoffmann) were noteworthy exceptions in Estonia’s general artistic practice and made up a complementary tandem that, as their greatest common denominator, emanated a sense of chilling dread. 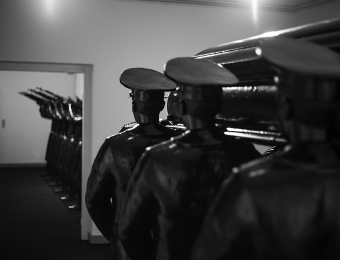 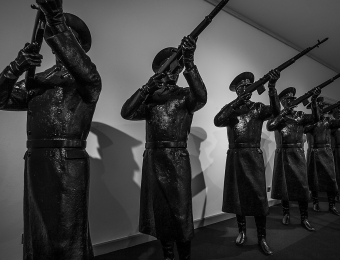 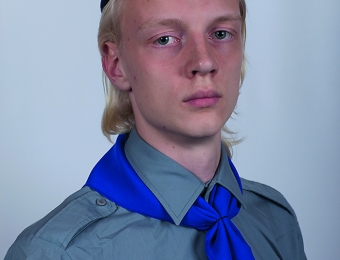 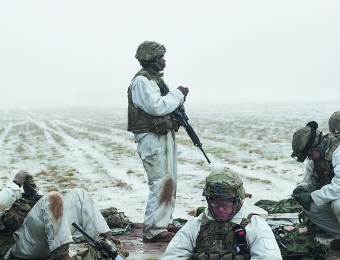 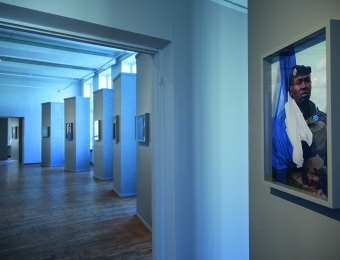 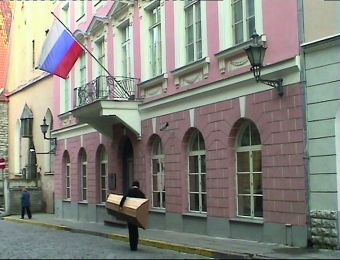 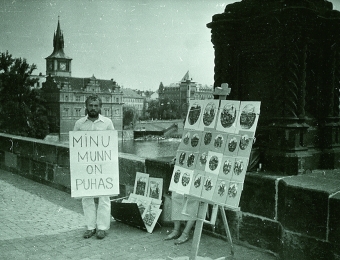 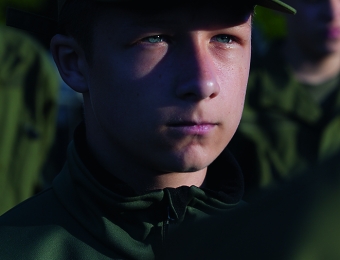 For his part, Art Allmägi continues the programmatic approach seen in his previous projects: his first two exhibitions were studies in white – “Cold War” at Draakoni Gallery (2014) and the exhibit of the Köler Prize nominees in the Contemporary Art Museum of Estonia (2016) – followed by a pair of “black” exhibitions, both titled “Paint It Black,” the first instalment of which was also held at Draakoni Gallery (spring 2017). Draakoni Gallery’s strategic location, across from the Russian Embassy, (which the artist himself saw in a dream-like apparition) has symbolic importance. In the first ‘white project’, Allmägi displayed a work that depicted the mutual surveillance known from the Cold War era, which in one way reflects the romanticism of spy stories but also the current political reality’s silent stand-off; the second project involved a public critique of the politics practised by the embassy in the neighbouring building. Its theme was the annexations carried out by the ‘little green men’ – irregular troops – and war, in which young men, despite their fatal bullet wounds, were listed on their death certificates as succumbing to heart attacks while on holiday, with their families unable to air their suspicions for fear of forfeiting their hush money. The context behind the exhibitions centres on the events in Eastern Ukraine, the discussion page of its Wikipedia (“War in Donbass”) is mainly preoccupied with the topic of how to label the conflict (the alternatives are “Russia-Ukraine War”, “Ukrainian Civil War” and “Counter-terrorism Operation in Ukraine”). During the outbreak of the conflict, Estonian military institutions considered it very likely that Crimea was only a smokescreen for the annexation of the Baltics.

While the action in Allmägi’s installation takes place in the dead of night, and the weapons sound silent salutes, Muravskaja has created a monument to heroes whose deaths have not yet been engraved in stone. Her earlier works that address nationalism made up a specific ensemble: “Positions” (2007), “They, Who Sang Together” (2008), “The Estonian Race” (2010) and, in principle, “Lucky Losers” (2009). At her previous solo exhibition in Tartu “Split Mind” (2010) she showed a video with the same title in which she destroyed the first works, giving the series a symbolic final act. Of her previous works, only the installation “Monuments” (2008) dealt with Eastern politics. It consisted of only a pile of limestone and a pile of glass, and was clearly inspired by the Bronze Soldier of Tallinn and the events that took place in Tallinn in the spring of 2007. Public unrest including rioting and looting took place in Tallinn on the 26–29 April 2007, mainly involving young Russian speaking Estonians which was sparked by the Estonian government’s botched attempt to remove a monument from the city centre, that extolled the Red Army (Soviet Forces) as liberators of the city. Russian state interests were mainly believed to be behind the organizing of the riots, which were in large part a prelude to the Kremlin’s ensuing politics.

Muravskaya took her next steps toward a more personal and political approach in the exhibition “Three Sisters” (2015), which dealt with conflict in the Ukraine through the lens of family tragedy – families pulled apart by different political views and everyday realities. It should undoubtedly be mentioned at this point that Muravskaja’s grandparents’ home (she herself grew up in Pärnu) is located in this indistinctly defined conflict zone in Eastern Ukraine. “Hero” (2017) looks to the future, where the events that both Allmägi and the heads of Estonian armed forces have theorized about have become reality. In the portraits, members of the Estonian Defence League youth organisation (Young Eagles) and NATO troops providing military deterrence have similarly resolute but strange looks in their eyes: it’s as if they know something that is still a secret to us, the observers.

A Treasury of Fairy Tales

Even though the approach to international politics in these two exhibitions (and more broadly in the two artists’ overall work) is relatively uncommon in Estonian art, there are nevertheless a few examples from other earlier artworks. Surprisingly, artist Neeme Külm, whom we are used to associating with space-twisting works of institutional criticism, has dealt with Russian themes on two occasions: in 2008 he and the architects Maarja Kask and Ralf Lõoke built the yellow gas pipelines linking the Russian and German pavilions at the Venice Architecture Biennale’s Giardini, and in 2006 he put on a performance, “Beslan”, in which he carried a wooden casket lid past the Russian Embassy to memorialise the victims of the hostage tragedy in Beslan.

Besides Muravskaja’s “Monument” (2008), a haunting commentary on Bronze Night – the aforementioned riots of April 2007 in Tallinn – was offered by artist Mark Raidpere (the two-channel video “Majestoso Mystico”, 2007), where news footage from Tallinn is accompanied by Stockholm street musicians who perform a Howard Shore melody from the film “Silence of the Lambs”. Continuing the commentary on the topic, in 2009 Kristina Norman’s work that represented Estonia at that year’s Venice Biennale (her installation “After War”) included a life-size golden replica of the Bronze Soldier statue, which was considered of such watershed significance that Kiasma (art museum in Helsinki) acquired the work. There are a few other individual examples where foreign policy is explored, for example, in a number of Peeter Allik’s works, but always with black humour.

It seems that Johannes Saar was correct when, in an article about Neeme Külm published on the Center for Contemporary Arts, Estonia website, he mentioned the “apolitical discourse” of the 1990s, for the favourite topic of Estonian art in the last few decades has time and again been The Artist. Jaan Toomik is living proof of the above: after two works from the restoration of independence period “My Dick is Clean”, with Vano Allsalu, 1989, where the artist walked along Prague’s Charles Bridge, carrying the slogan in the title, refusing to take responsibility for Soviet crimes, and the 1993 installation “Bed 75”, during which 75 Russian military beds were laid out on Freedom Square, which has always been the epicentre of (military) parades, the questions he poses in his video works and paintings have mainly been addressed to himself.

So why are two young artists like Tanja Muravskaja and Art Allmägi dealing with this topic? In one sense, it seems to come from their own backgrounds: the Muravskaja family is from Ukraine and the fact that Allmägi works for the Defence League is equally important. After all, blood is memory, and the environment makes the man! In a recent conversation with Muravskaja[1], with the art historian Indrek Grigor brought up the subconscious fears of the last Soviet generation: although the most active nuclear war rhetoric was in the past by the 1980s, gas masks were still lying around in every school for years after that, capitalism was still bad, and the lead-in music to the pan-Soviet evening news Vremya was stuck in everyone’s head.

It’s no wonder that now, at a time when spy scandals are flaring up, armed soldiers appear on the streets of Estonian cities with fighter planes overhead, and there is again talk of the division of the world into spheres of influence and deterring the enemy, these memories are climbing out of the back of our minds and into the daylight again. This is a generation for whom the fears of the Cold War were not daily ones – the real “duck and cover” mushroom-cloud video era was long past, but the things our parents subconsciously left unsaid and the silent glances they exchanged seeped into our inner being just as deeply. To be able to function on a daily basis, we have to release the tensions with a scream – and that is exactly what the Allmägi and Muravskaja works do. These exhibitions are cathartic for the artists, but it’s very clear that viewers need them, too. Entering the exhibition hall, we can say, “What do you know, I’m not the only one who’s afraid of dark figures running across the fields in the night” or “Someone else besides me is thinking about the time when the gravestones of new heroes will be lining the roadsides”. The other possibility is that this is yet another deterrence tactic: reality can never copy art. Even if you bring a bear into a fairy tale, the story will, as always, have a happy ending.

[1]  The exchange can be viewed on Tartu Art House’s YouTube channel, and a transcript was also published in the form of an article: I. Grigor, “Külma sõja lapsed,” Sirp, 24 November 2017.

Peeter Talvistu (b.1983) is an art historian from Tartu. He has previously worked as the photo and video collections holder and as the librarian and archives holder at the Tartu Art Museum and is currently curator and project manager at the Tartu Art House. Talvistu has curated numerous contemporary art exhibitions but has found the widest recognition for his restaging of Elmar Kits’ 1966 seminal personal exhibition on its 50th anniversary.