Some Day They’re Gonna Name A Street After Me

To build for the future
The Russian artist Zurab Tsereteli has developed a curious business strategy. He offers his sculptures as gifts from the Russian people to cities all around the world, specializing in huge monuments to commemorate victims of recent tragedies or popular historical figures. A gift is usually difficult to refuse because it is a gesture of sympathy, the object itself being a mere sign. Thus most of us have received gifts we don’t necessarily want to put on display. But Tsereteli is persistent.

Mayors play a crucial part in this economy of gifts. The monument To the Struggle Against World Terrorism was offered to New York after 9/11, but was rejected. Instead, Tsereteli turned to the mayor of New Jersey who happily agreed to erect the monument, but his sudden death coupled with a public outcry forced the City Council to eventually turn down the offer. Then the mayor of nearby Bayonne agreed to install the monument which was shipped from Russia and finally unveiled on September 11 this year.

In his own country, the mayor of Moscow has made it possible for Tsereteli to erect statues all over the Russian capital. But when Tsereteli decided to erect a monument to the poet Joseph Brodsky, Muscovites finally got fed up and started an internet campaign, collecting signatures for an appeal to the authorities and the sculptor himself to stop spoiling the capital’s image. “We’re really, really fed up with your bronze monsters” their petition read, adding that public support is needed because no one seems able to stop Tsereteli. Is this situation in any way comparable to what is going on in Tallinn right now? (1)

To leave a mark, to send a message, these are quite common human ambitions. We see the effects all around us every day – maybe most distinctly in the field of marketing. In our attention-fuelled society, traditional ways of gaining visibility are losing impact. In order to sell us goods, companies are instead attempting to communicate values through experiences. As for example when Sony got the buzz talk going by letting 250,000 superballs bounce down the streets of San Francisco. Or when Red Bull launches a speedway event with free drinks on the roof of Viru Centre in Tallinn. You gain street cred when the so-called opinion formers in various age groups start to spread the message by word-ofmouth. To create an experience you have to somehow touch the real, or rather: touch up the real.

The logic behind this communicative strategy is the same as when states and interest groups erect monuments in public spaces. The aim is to initiate or define incidents that will become the formative events of a nation’s (or corporation’s) identity. It is about impact and presence, either in the sense of being monumental, as architecture and billboards, or simply everywhere as bank-notes and logos. Seen this way monuments are not necessarily best understood as art, but as a very special kind of mass communication.

Tsereteli says he wants to fight evil through art and make life more safe and beautiful. In an attempt to legitimize art that’s usually where we end up – claiming benevolence and beauty. It is also a way to avoid criticism. 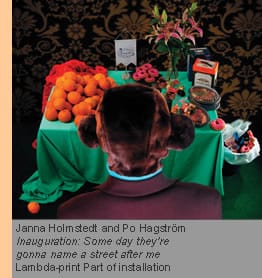 Let’s shift focus for a moment: The Swedish ship Vasa, intended to be the mightiest warship in the world, sank on its maiden voyage 1628 after just a few minutes. What was built to demonstrate grandeur and strength instead ended up as an embarrassing fiasco. But more than 300 years later the national fiasco has become a national treasure and one of Sweden’s most popular tourist attractions. That Vasa turned out to be more valuable to Sweden as a wreck than a warship thus reveals another meaning of the phrase ‘to build for the future’.

Not only military forces are mobilized to demonstrate the ability and power of the nation state, but also cultural forces. Artists are thus very closely related to this machinery called ‘the future’ – for example when we are commissioned to make art for public spaces. The questions then quickly follow: Whom do you serve? What is the context that forms our perception of the given situation?

As artists, focusing on issues related to the public sphere, we have been asked “How come you are so interested in public space?” One of the answers is: Because it is, and has been for centuries, the artists’ work place.

In Sweden there is a long tradition of commissions for art in public spaces. As a result of the cultural policy in the 1930s, the National Public Art Council was formed. The mission was to foster good taste among the people, provide high quality art in public space and to meet the demands for more employment for artists. The result, as it can be seen today, is a huge amount of naked bronze women spread all over the country. Naked women were considered to be ideologically and politically neutral, as if the female body itself signifies ‘high quality art’. Thus, at the same time as ‘good art’ was declared to be apolitical, it was used in a political programme to foster good taste. Can art be separated from its use? Where does the art ‘end’ and where, or rather when, does it ‘begin’?

Art as publicity
Miwon Kwon refers in her article ‘Public Art as Publicity’ (2) to an alternative way to look at art in the public sphere. Instead of genres, she suggests that we should consider art as different forms of publicity – that is, as different forms of communicative practices. The word publicity has a double meaning in English. One first comes to think of marketing and media attention, but more importantly in this context it refers to what in German is called ‘Öffentlichkeit’; how issues of concern are communicated, made available and handled in society. 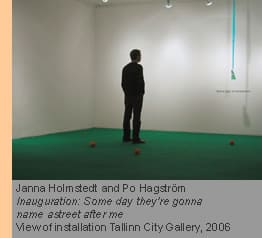 Kwon describes four modes of communicative practices: authoritarian, paternalistic, commercial and democratic. Estonians have a long and visible experience of the authoritarian model from Soviet times. Swedes, as mentioned, are well acquainted with the paternalistic attitude of ‘trust us, we know what is best for you’. The commercial mode of communication offers an alternative to state control through the freedom of choice on a free market, but another kind of power structure instead reveals itself based on profitability and access to different media. The general public also tends to be defined as consumers rather than citizens. A democratic practice though, opposes both state control and commercialism and aims to maximize individual participation. In reality all these different modes of communication are more or less mixed, but the perspective offered nevertheless helps us to think about art and its functions in new ways. Art seen as a communicative practice rather than an object also highlights the fact that the means of distribution you choose is part of the message you send. Beauty and benevolence is not necessarily enough.

A huge statue will be erected in the Bay of Tallinn and a competition has been announced in order to find the most suitable design. The competition, on Kalevipoeg, hero of the Estonian National Epic, is initiated by politicians and will be judged by politicians*. This could be described as an example of a paternalistic and commercial attitude, disguised as a democratic mode of communication. Open competitions, as this one, are a clever way to make artists work for free according to your own agenda. Those who do not respond the correct way are disqualified. So what are the options here? To abide by the written (and unwritten) rules of monument making, to make visible the game-rules at work, to boycott the whole thing or to infiltrate? How do you choose your fights and where should they be fought?

In our own project Monument for the Masses (www.trialerror. org/monument) we propose a monument for the city of Tallinn. We ask ourselves if it is possible to think in terms of a democratic mode of communication dealing with power manifestations such as monuments. Are monuments about art, politics, tourism, national identity, collective memory or a bunch of individuals who for different reasons want to ‘write history’? And, last but not least, what is our common responsibility to write alternative histories?

1 Here you can easily start your own petition to collect signatures: www.petitiononline.com

2 “Public Art as Publicity” published in: Simon Sheikh (Ed), In the Place of the Public Sphere? On the establishment of publics and counter-publics, Berlin: b_books 2005. The article is also available at www.republicart.net

Janna Holmstedt and Po Hagström
are two Swedish artists who work together under the name Trial and Error. Their work includes text, image, video and installations as well as intervention and online projects. View Monument for the Masses and their proposal for a monument to the city of Tallinn at www.trialerror.org.