Who knows whether the light still traverses the room that once gave meaning to shadows? It can be assumed that shadows of speech occur where the form is vanishing and all that’s left of colour is a broken shade. 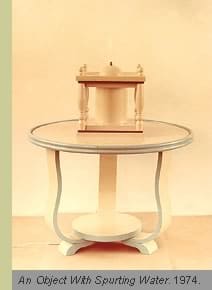 to some records, shadows of speech have been presented as a separate phenomenon, torn out of general context, restricted by a closed form. At the same time, other sources refer to the possibility that those shadows can be brought into contact with the main topic of speech, and this may concern us too.
However, these are but solitary fragments of the unreachable whole, to which the soul is now crying out.
I am standing at the foot of a ladder, and can hardly go any further when the point of view slides down from above. I have been waiting for just this moment when a sea wave rolls shots of a video film at the border of light and shadow, and at a certain moment it all repeats itself.
Decorative and anti-decorative shadows are ready to line the nooks and crannies of the soul, and who can tell what else? Everything is of course not derived from emotions as much as is generally assumed, and this has a disciplinary effect.
Suddenly somewhere a drum is heard. Bang, bang, bang.
Somewhere. Indeed, somewhere dark clouds, a clap of thunder, and the flash of lightning, and already the shadows carry an all-embracing continuity of the visible, disregarding the few exceptions that are prepared to present both the real and the imaginary in this world.
Soon. All my pockets are full of hail. 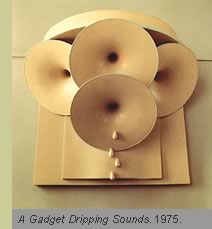 I feel an urge to shake that useless body whose scale has now changed, and it may well happen that the next moment I won’t see it any more, although my glance is as clear as five o’clock-tea. I notice and realise how the moss-green at my feet flings itself upwards in a relief column, and the down-to-earth reddish-browns bounce off their initial colour substance in order to stress the part of speech of which only a silhouette remains. There is no difference between the front and back when I notice the complementary couple of pale blue and orchid pink embracing each other with uncompromising passion.
I would like to stay very quiet, pick up the neglected line of musical notes, accompanied by an ill-tuned harp. I’d bow and hum along with the tune, if only the fiercely yearning blue didn’t form such a quiet and secret hiding-place where you, too, would fit in with all your transparent images, the existence of which I have always guessed; and when I now put as much distance between myself and the original world, whose temporal stretch is fading, then I’d only wish to ask: “How high is the Moon?”

Kaarel Kurismaa
(1939), the first Estonian artist since the second half of the 1960s to continuously tackle the problems of kinetic art. Shadows of Speech 1995 can be regarded as his manifesto.