‘Nothing’ seems to be one of the central notions in the turn-of-the-century art and culture as a whole. 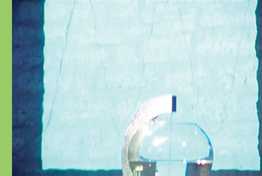 The fever of ‘nothing’, having started as early as the 1960s – 1970s in minimalism and conceptualism, is definitely back, stronger than ever before. ‘Cool of the blank generation’, ‘the void’, ’emptiness’ and ‘invisibility’ should be familiar words to everyone who understand anything at all about contemporary pop culture. Nothing matters once again.
As early as in 1997, the English artist Martin Creed, candidate for the 2001 Turner prize, immortalised the mega-pseudo-hit Nothing, together with his zero-music band Owada. This first album, too, was called Nothing. The most remarkable ‘nothing manifesto’, however, is the mega-exhibition Nothing, curated by the English artist Graham Gussin and Ele Carpenter, curator of the Northern Gallery of Contemporary Art in Sunderland. This exhibition tackled the topic criss-cross, inside out, historically and as a discourse, scientifically and ‘science-fictionally’. Last year, the physicist John D. Barrows wrote The Book of Nothing…

Simply the best of zero-zeros
I deliberately chose examples from the British cultural space, because Mare Tralla, one of the curators of this year’s Interstanding, has been living both in Tallinn and in London for these past few years, and has certainly been influenced by the art environment over there. “End repeat calls the artists to abandon the ‘flinging’, and discover besides interfaces created for the sense of vision, also possibilities for other, ‘invisible’ interfaces meant for other senses,” wrote Tralla and the other curator Ando Keskküla in the exhibition introduction. The essential difference between ‘end repeat’ and the works displayed at the 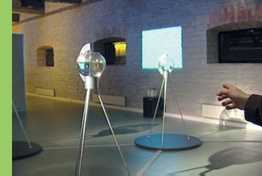 Nothing exhibition perhaps only lies in the emphasis on the rhetoric of digital art, maybe not even that. Regarding the perception of the world, all works represent quite similar manner of thinking. Entering the box of Tomo Saviç Gecan, a Croatian artist residing in Holland, we seem to find nothing at all there. However, a tiny, almost invisible pick-off has already spotted the visitor, dazedly wandering around in the empty box, and ignited a white rectangle hidden in the remotest corner, shifting it a centimetre along a rail. By the end of the exhibition, the rectangle hopefully reaches the other end of the rail. The majority of visitors never notice it at all. A wish to become invisible, non-existent, together with iconoclasm taken to the extreme, seems to be inseparable from the author’s position of Gecan. At Manifesta III in Ljubljana in 2000, he displayed two rather similar photographs of the Zagreb sports hall. The almost imperceptible difference lay in the slightly smaller box, produced amongst the lines on the floor denoting the volleyball field.
The English artist Matthew Crawley’s works My Invisible Friend (1994) and his video Film of Me Hiding in the Bushes (1996), shown at the Nothing exhibition, reveal much less pathos. The first consists of a label that claims that the artist is here displaying his invisible friend. Since the friend is invisible, there is, of course, nothing whatsoever to see. The title of the other work also says all – the film shows a bush behind which the artists allegedly conceals himself. Again, there is nothing to see and we don’t actually know whether the artist is there or not. Gecan and Crawley share the rhetoric of the same non-existence, but the latter’s work is funny and idiotic. Gecan, on the other hand, is feverishly existentialist. But it’s the nothing that’s the main thing. In both cases.

Zen-nothing of John Cage
Chris Meigh-Andrews’s A Tribute to John Cage provides the Interstanding’s search for ‘nothing’ with a historical dimension. As early as 1959, Cage delivered a lecture about ‘nothing’, saying amongst other things: “I 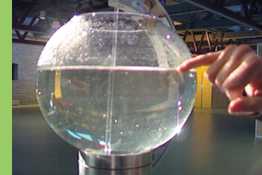 have nothing to say and I am saying it.” In his homage, Chris Meigh Andrews stresses the two main sides of Cage’s world perception: the Duchamp-flux ready-made symbiosis of music/art with zen and Oriental philosophy. Eight tape-players placed on music stands in a circle simultaneously play eight John Cage lectures. A circularly moving microphone, like a metaphor of the circular movement of the Buddhist life cycle, picks up bits and pieces of these lectures, and also occasional background sounds of the exhibition hall, and amplifies them in the loudspeakers in the foyer. Cage took over Duchamp’s idea of the ready-made, and transferred it directly into music, turning the street and other everyday noises into music under his conductor’s baton. Differently from Duchamp, who chose his ready-made objects very carefully, Cage does not choose his ready-made sounds, these become music quite accidentally.

The Nothing of Physics

Unlike Gecan who tries to turn the visible into invisible, Luc Jerram makes ‘the nothing’, the invisible, 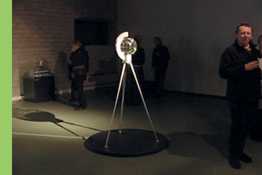 visible. The physical world seems to exist outside the visible world, as if being smaller or considerably bigger than the so-called ‘real’ world. It seems to function separately from our relativised perception of the world and concepts of art. Jerram’s Tide could be a study material in a physics lab that describes a certain process of physics. At the same time Jerram uses the laws of physics more like frames, creating works of art that depend on them. The tide naturally depends on the Moon, just like Tide. As the artist himself says: “In Tide, I aimed to give the viewer a sense that the work was being controlled from ‘out there’.” The undersigned has to confess that his knowledge of physics does not reach much further from producing electric current with a stick of ebony, and thus fnds it difficult to analyse this particular work any further.

Visible Voice
The Croatian artist Magdalena Pederin’s The Eye Listens, the Ear Sees, is a visually attractive, cool work of art, magnificent in its simplicity. The artwork consists of enlarged LED metres – this is the name of electronic display, measuring the intensity of sound on our CD-players and on other sound equipment. Pederin makes the voice visible by transforming every little sound the visitors make, into the abstract, 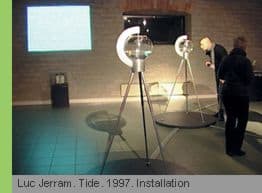 green and red light flow. It’s the minimalism ‘tuned on’ pop – by having a very certain link to the pop culture. As the artist says, this visual sign for sound signals is often used in music videos as a kind of trademark of modern sensibility. But it’s also linked to pop art – it is a small, almost invisible segment from our everyday surroundings made larger than life, like some hamburger by Claes Oldenburg. At first glimpse it seems to be just another ‘size-matters’ trendy contemporary artwork. But it is far more than just that. As Magdalena sees it from the context of performance art, movement, sound and images enter into dialogue and they are synchronised. However, whereas in such performances there is a particular performer (or generator) responsible for each of these elements, in this project sound, movement and images all come from the same source. As a consequence, the dialogue of these elements of performing art is internalised, and given the form of monologue. But what’s so wrong of being trendy anyway? The US fashion designer Sabine Seymour, for example, presented ‘smart clothes’ at the Interstanding conference – technology that can be worn, uniting fashion, pop culture, new cordless media. Clothes provided with digital sensors and other contemporary technology turn the body into a kind of ‘display’, which can be found and discovered at each point. It is perfectly possible, in a longer perspective, that fashionable technology enters our everyday life, becoming an indispensable part of the casual fashion.

Conference
The two-day long Interstanding conference had a more practical approach than the earlier ones. In addition to the artists’ presentations, mostly more practical projects were introduced, e.g. Seymour’s Fashionable Technology, or Adam Hyde’s Frequency Clock; historical researches like Chris Meigh Andrews’s Artist/Engineers: Pioneering Video Artists and electronic imaging technology: 1968-1978, or Darko Fritz’s Amnesia International – early computer art and the tendencies movement; Ando Keskküla’s Estonian retrospective. The conference ended with Beverly Hood’s performance Translocale where a video picture of ballroom dancing was despatched all over the world to all sorts of video chat rooms. At the same time, work in the Media Laboratory on the ground floor of the Rotermann Salt Storage continued, and the events took place until 18 November.

Conclusions
In the language of programming, ‘end repeat’ means the end of repeatedly fulfilled commands (the loop). End repeat determines the boundaries of a specific loop, fixing the point where the commands inside a loop are distinguished from the following that describe a new action. In simpler terms, Interstanding sought a new starting point, a new way in art that would, on the one hand, ‘finish’ the video art based on the flinging of the old, and on the other, would offer digital art a new outlet. But somehow it seems that art of zero-zeros deals with nothing. Regardless of technology.

P.S. It’s zero degrees outside at the moment.