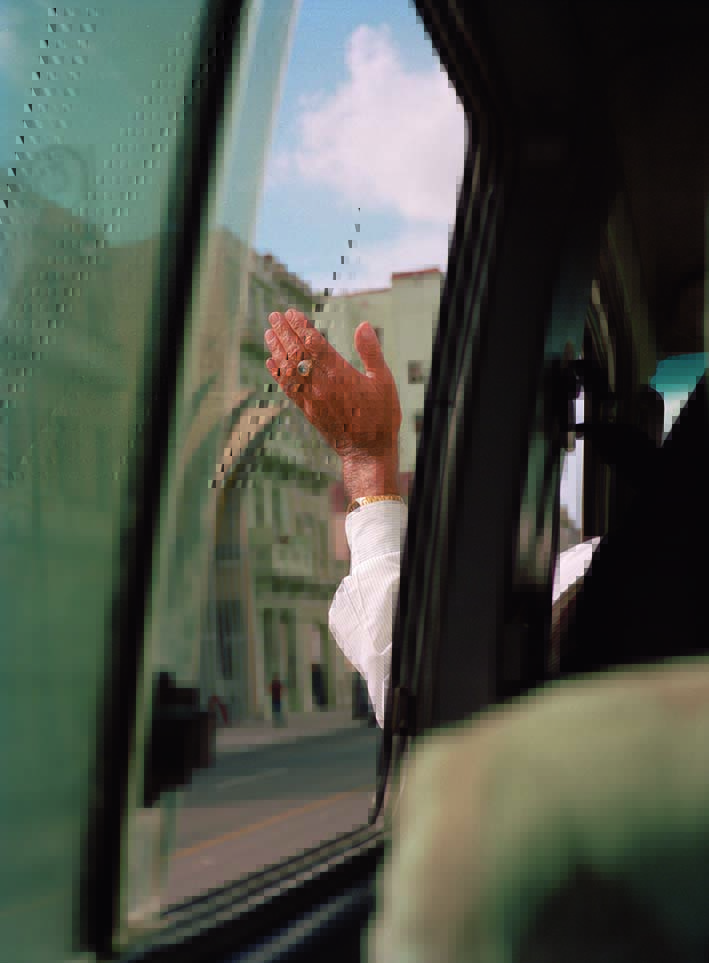 Meetings on a ‘blind date’

Irina Rozovsky was born in Moscow and moved to the United States as a young child in 1988. We first met in 2009 at Harvard Square in Boston on a ‘blind date’. She had emailed me a year before out of the blue, writing that she liked my work, and if I were ever around the East coast to come say hello. A year later I happened to be in Boston and we met. After hours of talking about photography and looking at work prints at a local bar, it was clear that we would become friends and have been ever since. Irina’s Eastern European background and genuine curiosity about the world around her is refreshing and contagious.

Irina grew up in Boston, where her family moved to from Russia, and now lives in Brooklyn, New York. “We first lived in Austria and Italy before we were allowed to come here. Growing up as an immigrant kid, whose parents speak with heavy accents and don’t do typically American things, you try to compensate and fit in, you covet what you are not, and you survive by adjusting to any situation in front of you. Much later you begin to appreciate and wonder where you are from and yearn for it, not knowing exactly what it is.”

Irina earned a BA in French and Spanish Literature from Tufts University and an MFA in Photography from the Massachusetts College of Art. While working on her projects, she taught photography at Boston University, the Art Institute of Boston, at Parsons of the New School, and at Harvard University, where she was a colleague of the British photographer Chris Killip, and she now teaches at the International Center of Photography.

Since our first meeting, Irina has had a book, One to Nothing, published by Kehrer Verlag in 2011, which she describes as depicting “an Israel we do not see on the news. These images go beyond politics: they do not defend a side or critique the conflict. Here, Israel is seen in the unexpected light of empathetic neutrality, as a mythological backdrop to the age-old struggle between man and the dusty, sun bleached landscape of his origin. The score of this existential battle is locked at 1–0, with no finish line in sight.” Her work has been widely exhibited in the U.S. and in Europe, where she has had recent solo exhibitions at the Southeast Museum of Photography in Florida (Irina Rozovsky: A Perpetual Hold), at the Noorderlicht Photo Festival in Groningen, Netherlands (In Plain Air), and at the Breda Photo Festival in Breda, Netherlands (One to Nothing).

In the past year, whenever we meet up, whether it’s at openings in Chelsea or drinking beer by the East River on the Lower East Side, I’ve enjoyed hearing about Irina’s trips to Cuba. She is putting together a new book, and I am thrilled to ask her some questions about it. 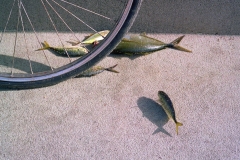 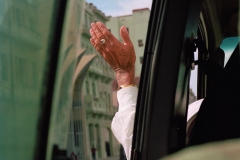 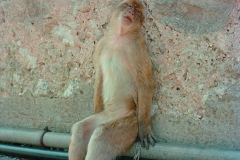 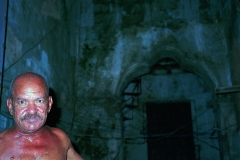 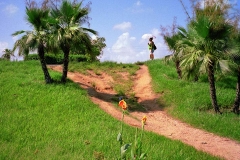 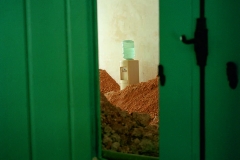 TU: Last year you travelled to Cuba to photograph. How did you end up there, and why? How would you explain this continuation of your work, which follows a thread from Russia to the US to Israel and most recently to Cuba?

IR: I first went to Cuba simply to go—I was curious. As in most places I’ve photographed, I didn’t go with a premeditated idea. It’s hard to make plans about somewhere you’ve never been. Of course you can’t help but prepare and imagine, but then the place takes over and brushes all your ideas aside. In the end, all you have left to work with is your interest in the world and an internal antenna that’s hopefully turned on.

I made a lot of images the first trip and decided to return a little later and try to make more. I now knew the place a little bit but it remained an enormous mystery and I wanted to delve deeper. There were specific images I was looking for, but there were mostly situations I wanted to find myself that might lead to making those images.

In regards to the previous places I’ve photographed, it’s a similar process: I find myself in a geography that somehow feels very charged and meaningful and I work with a pressing urgency to convey it. It’s possible that all the places that draw me in this way are related by an essential thread, and I hope it unveils itself much later. It’s too early to know.

TU: You’ve worked in Israel, Prospect Park in New York and now in Cuba, and while these are rather disparate places, the images feel like they could be any place or every place. There’s a strong sense of an emotional place rather than a mere geographical one.

Do you see this as somehow being linked to your upbringing and immigrant background?

IR: I photograph in very specific places whose names are somehow secondary to the result, as the images are more about the collection of time, and the breath that people breathe or fight for. I suppose I could draw a line between growing up and how it shaped how I see: as an immigrant kid, you have no roots, you’re always sort of passing through, and your attachments are strong but ephemeral. I think what keeps me from being a documentary photographer (whatever that is these days) is my reluctance to name the place I am and the hope that photography can give access to a common place, a geography of the mind.

TU: We have all seen Cuba photographed in a nostalgic or romantic way, e.g the old cars, colourful interiors, this other world just 90 miles from Florida that Americans are barred from visiting, and it creates an allure. Did you go out of your way to avoid those tropes?

IR: True, we’ve seen bundles of pictures made here, and that’s understandable: Cuba is utterly unbelievable when seen for the first time. In a traditional sense, it is hugely photogenic but it’s also a deceiving mirage: its surfaces, bright and languorous, trap your eye and keep it from wandering. The majority of photographs I’ve seen from there are seduced by colour and antiquity, and stop at the surface. I was curious about an internal sense of this place, its condition rather than its physicality.

In general, I find it interesting to photograph in a place that has already been looked at, chewed on and digested. I find it more problematic to photograph in an exotic, undiscovered place that inevitably yields never-before-seen imagery. For me, it is an inviting challenge to work around the edges of something seen, and peel back what we think we already know, a kind of deja vu.

TU: Certain types of photographers benefit from having a kind of innate ability to get themselves into favourable situations, or can be persuasive or transparent in different ways. What are your charms or special powers for getting what you’re after?

IR: Part of the genius of photography for me is that I hardly ever get what I was after in an image. It’s always different, sometimes much better than I hoped, and many times much worse than I feared. I do notice that with the camera I tend to be a visitor (different from a tourist) in every situation. This means I’m an outsider but try to get on the same page with the person or situation in front of me: to enter their moment and create an instant where we can make a picture together. This is very hard sometimes; it means not having a big agenda, and being awake, open and responsive in ways that make me uncomfortable. So I go quickly and try not to overstay my welcome. I ultimately don’t photograph people who don’t want to be photographed, and prefer a shared photographic space that’s something like a conversation.

Besides that, if I’m really interested in a situation or a person or a scene, there’s no time to even think or plan an approach: suddenly I’m there.  I think Diane Arbus said something like it took her exactly three seconds to realize whether she wanted to photograph somebody. That’s a wonderfully short moment for deliberation.

TU: There is a long tradition of the road-trip photographer. It’s a rite of passage most often associated with male photographers: Walker Evans, Robert Frank, Stephen Shore and many others. As a woman do you feel like your work contributes to or challenges that tradition? What is it like to travel alone as a woman?

IR: I’ve never thought about it, but if my efforts ruffle the feathers of the photographic giants you’ve mentioned, I’ll be damned. Being a woman certainly has its pluses and minuses (you’re supposedly less threatening), but at heart I think it’s irrelevant to me: I don’t know any other way, and I do what I can do being who I am.  Only in a handful of instances have I wished I was a brawny, intimidating man who could photograph in Prospect Park at night. But I think I’d rather be a girl and bring a tough guy along if need be.

I have the pleasure of knowing a few fearless, globe-trotting women whose artistic practice and spirit inspire me: I once assisted the photographer Sharon Harper on a photographic mission to Fairbanks, Alaska. Sharon photographs the night sky, so every night we’d find ourselves in the middle of a pitch-black snowy landscape, exposed to the elements under a celestial abyss, all in mind-boggling temperatures. In those moments it seemed like the scales were shifting and the rows of long-dead male polar explorers were parting to let us in, or else they were rolling in their graves.

TU: You have a background in literature. Which writer do you think has informed your work the most?

IR: Chekhov, and his painful beauty.

Terttu Uibopuu (1984), an MFA in Photography from the Yale University School of Art. She is currently teaching at Wesleyan University and at the International Center of Photography.
For more information see www.terttuphoto.com
See also Estonian Art 1/2, 2012