Kristjan Raud (18651943) belongs to the older generation of Estonian artistic pathfinders. Together with his twin brother Paul Raud and his contemporary artist, Ants Laikmaa, he managed to break through the obstacles set before the Estonians by the prevailing peasant mentality and the extremely class-conscious society of the time. Kristjan Raud was one of the first Estonian artists brave enough to try and make his career in his homeland, although his talent and connections in the art world, established already during his studies in Germany and St.Petersburg would have enabled him to easily merge in either place.

The long years of study in St.Petersburg, Dusseldorf and Munich ended in 1903 when Kristjan Raud settled at home. A great part of Raud‰s work is based on Estonian folklore; his drawings have been the first to give visible shape to strange and ancient creatures, ghosts, goblins and personificated natural forces, and even to tales of flying lakes etc. The magic world of Kristjan Raud‰s drawings charms the viewer with its epic poetry, just like the fairy tales themselves that, in the words of the artist, are ėfull of sounds, pleasant simplicity, pleasure, naivety and the unexpected‰.

In 1935, many Estonian homes acquired a copy of their national epic Kalevipoeg illustrated by Kristjan Raud. This made his name known to his fellow countrymen. Kalevipoeg with Raud‰s pictures was re-issued in 1975. To an average Estonian, Kristjan Raud is primarily known as the illustrator of the national epic, and as an advocate of national romantic art ideas in the 1930s, when quite different winds were already blowing even in the remote European province of Estonia. 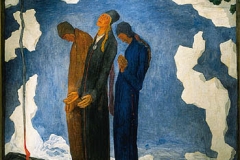 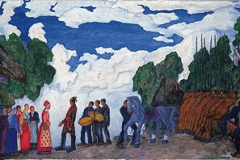 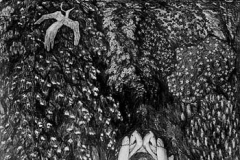 Several hundreds of Kristjan Raud‰s Kalevipoeg-based works, mainly pencil and charcoal drawings, were done between 1913 and 1943. The most spectacular of these were created in the ė30s, during the artist‰s later creative period. In these pictures, the nuanced picturesqueness is in festal harmony with compositional clarity and monumentality. In the late 1920s, after the artist‰s trip to Paris, he developed his highly individual style; the archaically heavy angular forms, the expressiveness and the monumentality of shapes resemble the forceful forms of Estonian peasant architecture and the simple ornaments in popular wood objects.

Characteristic of Estonian folklore, Kristjan Raud‰s work contains very few light and playful undertones. The image of a singing Kalevipoeg is one of the most joyful motifs in the artist‰s entire work. More than 40 drawings and sketches picture Kalevipoeg as a triumphant giant standing on a hillside and singing to his brothers. In Raud‰s work, Kalevipoeg is a joyous king, forever young  like the dream of ancient country people who wish for a crowned king of their own, a king never crowned.

In the spring of 1940, shortly before the forceful incorporation of Estonia into the Soviet Union, the last pre-war art event took place in Estonia  the year of Kristjan Raud. That year was dedicated to the artist in connection with his 75th birthday.

In the winter of 1942, a few months before his death, Kristjan Raud finished his composition entitled The Return of Kalev, a symbolic work in those complicated years when Soviet power alternated with German occupation.