The opening of the new museum in Tallinn was a long-awaited event that had been heralded by lots of discussions about what the museum should be like and whether its building would be good for the kind of programs which had been planned. I understood that there were differing opinions about the kind of art it should present and also debates about the direction the museum should take: 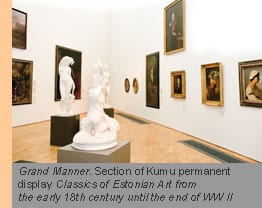 national/international, contemporary/modern, the voices of the curators/artists etc.
I came to Tallinn to attend the opening and also to take part in the board meeting of Manifesta Estonia, being interested in arranging the 2008 biennale. The meeting was preceded by a research trip, where the chairman of the board, Henry Meyric Hughes, and I were taken around to see the different possibilities that the city could offer. Then, the Manifesta 2006 was granted to Nicosia, but Estonia was encouraged to work further on their plan and try to secure the necessary economic guarantees for hosting the event in 2008.
These processes are still going on, so the outcome is not yet known. What we, however, learnt during our researches was that both the new museum and other venues in Tallinn were ready to co-operate on this plan and that the contemporary scene was really dynamic and able to co-operate.

The expectations about the new museum were high in my mind. When I entered the building on the opening night, it was already full of people. The entrance had the same kind of architectural solution as Kiasma in Helsinki, but was not as organic in its formal language. I went up the stairs/escalator to the main hall, where the equipment for the opening speeches had been prepared. 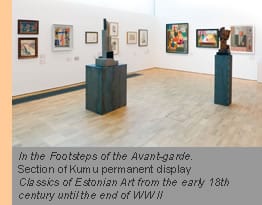 I went further up to the top floor in an elevator, with the intention of walking down and seeing the rest of the exhibition spaces and the exhibitions. The exhibition halls were half full of people and there was a feeling of jubilee in the air. Estonia had also won another gold medal in the Winter Olympic Games that very day and locals – unlike we Finns – were really excited about this. I met both Finnish and Estonian people I know and among all these greetings and small discussions, it was somewhat difficult to concentrate on the art shown. I did my best and found the opening exhibition quite bold in its approach. It seemed to focus on the large-scale and on clear statements.
The collections were perhaps easier to see, and by the time we reached the collection floors, the speeches had started and the floors were now almost empty. I liked very much the presentation of the early avant-garde: solid presentations of all the important names, clear spatial divisions and a good overall feeling.

I was positively surprised by the decision to show art from the Soviet era. This is the only way to 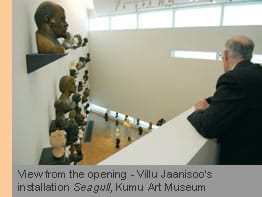 understand what it was all about and to put it in historical perspective. It was in no way the kind of art that I like, but I think it belongs in a museum that honestly tries to connect history to the present day, while also directing its tentacles towards the future.
This was the most lasting impression of this first visit to Kumu and I hope to be able to return soon to see more.
As for the Manifesta meeting, it did not have a quorum, so the meeting concentrated on discussing the preparations for the biennale in Nicosia.

Maaretta Jaukkuri
Chief curator of the Museum of Contemporary Art Kiasma in Helsinki, presently working as professor of ‘art and common space’ at the Faculty of Architecture and Art, University of Trondheim.