I know what I want

Painting is presently enjoying good times – after a longish interval, quite a few young people have emerged who have found their calling in painting. New media have not been exhausted, but they are very specific, and no technique or medium can ever replace what is already established. The latter has a certain spoken language that should not be rejected as long as it still works. True, the imminent death of painting has been proclaimed for centuries, mostly in the context of ideological cataclysms and especially in the context of the left-wing anti-luxury attitudes. Looking at the Münster Anabaptists and the destruction of pictures by the Reformists, it is obvious that the same ideological catalysts occur today as well, mainly carried by the notion that a painting is an item of luxury. When the concept that art for art’s sake is negative and art must be connected with ideologies becomes prevalent, it produces 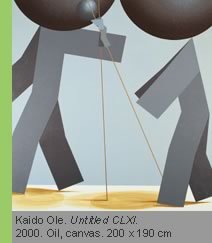 aggression against things that are impractical. Painting is clearly impractical; its usage by ideologies is somewhat more complicated than in other media. Even the changes by Italian Futurists and the Russian avant-garde artists, demanding ideological art in the fashion of Vladimir Majakovski, were parallel to the general developments of art as far as their language of form was concerned. For wider masses, however, this kind of art still remained alien and brought about a more extensive spread of neo-classicism: narrative plot and primitively realist form. After WW II it was the turn of conceptualism to declare the death of painting, although, interestingly enough, it was not pop art that was initially intended as a reactionagainst too decorative abstract expressionism. The works of Richard Hamilton or David Hockney easily fit into the development trends of traditional painting.
When we took up the avant-garde art more actively in the 1960s, I was very keen on painting. I was not merely interested in the contemporary art picture, but in painting as such, from Egypt and Rome onwards. I found a language for myself that has persisted, and therefore I am equally keen on Poussin, David and Warhol, although my interest follows individual works rather than artists. Despite that, my late 1960s work is labelled pop art, which goes to show that it was not a destructive anti-history attitude, but a new link in a chain.
In the mentioned context, the photo-realistic paintings of, for instance, John Smith (Marko Mäetamm and Kaido Ole) or Tõnis Saadoja are often accused of cold and cynical handwriting and of the lack of any ‘unique’ and ‘original’ values. Their handwriting is nevertheless highly original. This is a paradox – denial creates something new. Accusing Smith and Saadoja is strange, because the religious wish for anonymity and self-denial are certainly correct, but unattainable. An unconscious desire to create differently from others will never disappear; Warhol called himself a ‘machine’, but his way of thinking is highly ingenious and even his handwriting has become a trademark.

In the new Estonian painting, originality is therefore still on the agenda and in my opinion also necessary. At the same time I do not think that young artists are trying very hard to be innovative in painting.
It is, however, quite difficult to see any established trends at all because, unlike the artists who emerged in the 1960s, I cannot think of any group uniting young painters. New faces arrive, but independently. It could be said that new painting exists, but its character is indeed more fragmentary. (This does not reflect the ideological fragmentation of society and time, but rather the fragile nature of human relations.) 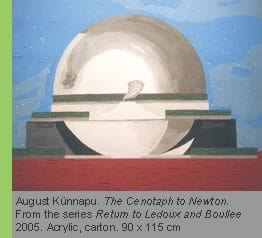 It really means nothing where quality is concerned – the existence of a group does not determine much, and as for today’s young artists, they seem to be more united by the spirit of the times, rather than any organisational framework. In Soviet times, a ‘young’ person was also determined by separate exhibitions where only artists up to 35 years were accepted, whereas today the new arrivals blend into the general art picture much more smoothly, and they do not fall into a clearly distinguished section in the local art world. In painting I regard colour associations as very informative and significant, and here August Künnapu is getting more interesting. I have no idea whether he does it deliberately, but colours play an increasing role in his paintings. It could be a question of training – colour as a structural component of painting inevitably becomes more refined and independent, and its task will no longer be merely to illustrate the idea. Although apparently monocromatic, the tonality and association of paintings by Alice Kask are fascinating. Not every eye can distinguish colours in her black-and-white or blackblack works, but this peculiarity is, at least for me, quite obvious.

As for our newer artists, I somehow believe that aesthetic qualities, primarily ‘beauty’, are going to make a certain comeback in painting. Looking at the works of, for instance John Smith or Kaido Ole, they are … beautiful. This is not the na•ve beauty of kitsch, but something else. Incidentally, Ole studied painting at the Estonian Academy of Arts and I have heard that young artists consider him a valuable model. Ole 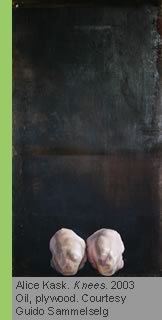 has said that whatever you are going to paint must first be ready in your head – this is a kind of rationality that younger artists obviously also follow in their work. As a bystanderit is difficult to judge how much they enjoy the process and how much they only focus on the results. And what’s more, Ole’s works have a large format, and younger painters have been producing bigger pictures as well. The reason could be that their approach and their wishes (eg using a large image) indeed require a big format. The emphasis seems to be on empty space and simple surfaces, as scarcity of images is generally preferred over wealth of details.
Against the background of art history, younger painters do seem to form a certain section. There are references to older predecessors, but no dense network emerges. Quotation is rare, but quotation as such in art history comes in waves, so that models for today’s young artists can be found in their predecessors; for Künnapu it is 1960s pop, for Saadoja 1980s hyperrealism, for Kask the works of Enn Põldroos, although I do not see direct quotations anywhere. However, unlike the early 1990s, it is possible to talk about a certain period of reconciliation with the heritage of painting.
It is quite difficult to make out which approaches prevail with young artists. On the whole, we could perhaps speak of the emergence of neo-pop and neo-realism, or more precisely, the neo-figurative trend. The first, neopop, seems to be the most widespread (Künnapu, Merike Estna, and John Smith with their large images). At the same time there is talk of the more conceptual or theoretical approach to painting by young artists, although I would rather call it a ‘conscious’ approach: they do not function so much on the level of emotion as on the level of wish. This kind of discussion about ‘theoretical’ painting resembles the 1970s, when pop-artists, especially myself, were accused of being soulless, cold and unfeeling. I have to confess that I am not interested in emotions, but in wishes – I know what I want. I believe that the ‘I know what I want’ approach clearly characterises the current generation as well. Moreover, I as a viewer understand what they want. I often cannot grasp what is being expressed – the author is vague and confusing on purpose. In the new wave of painting the artists have a firm wish to say something and they know how to say it; they have the skill to formulate idea and message. Idea is essential, as we can often see works at exhibitions without any founding idea, only a wish to ‘do something’. The ‘I know what I want’ quality is, at least for me, the most important.

Andres Tolts
(1949) is a painter and collage artist who emerged on the Estonian art scene in the second half of the 1960s, as one of the most outstanding avant-garde and pop artists