How To Survive Without Monuments Or With Wrong Monuments

In a country such as Estonia, which has been under foreign rule for centuries, most monuments can be clearly divided into two types ­ our own and foreign ones, right ones and wrong ones. Not until 1918 did the country become independent, and when a large number of monuments to the War of Independence (1918­20) were erected in the 1920s and 1930s, this was the first conscious attempt to erect monuments to episodes in our own history. The next wave of monuments, this time to the Soviet soldiers, ëliberators‰, came after the WW II, when Estonia had been annexed to the USSR. It would be most convenient to an art historian, if the  ëright‰ monuments were made by ëgood‰ artists and the ëwrong‰ by the ëbad‰, but this is, unfortunately, not the case.

Erecting a monument to the War of Independence in every community was the first substantial contact the Estonian people made with monumental art. Committees consisting of local people decided as to which kinds of monuments they wished to commission, and these monuments reflected the true tastes of people. Academic solutions prevailed, and even though a few cubist and constructivist projects were suggested, none of them were carried out. People were proud of their monuments, despite the fact that the Estonian art world found most of them lacking in artistic value.

Following the Soviet annexation in 1940, monuments to the War of Independence were destroyed. When Estonians started to move towards their independence in the late 1980s, many old monuments to the War of Independence were reconstructed. They were reconstructed as they had been before, despite the art historians‰ criticism that it is impossible to recreate academic bronze sculptures which had been melted down but their suggestion to commission modern monuments from present-day artists and erect them in the original locations was not accepted by the Estonian public. So today we can find numerous bizarre monuments across Estonia characterised by artists‰ helpless efforts at modelling academic figures.

The monuments to the Soviet ëliberators‰ and to Communist leaders were not born of the free will of the people, but were commissioned by the rulers. It was nevertheless important for the Soviet authorities that monuments should be of high artistic value. Yet since the restoration of independence in 1991, Estonian public opinion has demanded the removal of these monuments, and in many cases this demand has been fulfilled.

Most dramatic has been the conflict concerning the monument which was erected after the war in the centre of Tallinn to Soviet soldiers who were killed in 1944 while ëliberating‰ Tallinn. The monument occupies an important place in the city, between the 19th-century St Charles Church (Kaarli kirik) and the National Library built in the 1980s. This monument is popularly known as the ëBronze Man‰, since the central figure of the monument is a bronze statue of a Soviet soldier with his head lowered in mourning. The Estonian public has repeatedly demanded the removal of the monument, but the city authorities have not acceded, mainly fearing the protests of local Russians, as for many of these the monument has become a part of their identity. Instead, the monument has been modified Ö the eternal fire, a later addition, has been removed and the road system re-orientated in order to lead people past the monument to the new focal point, the National Library. The monument is now hidden from the street by a row of lime trees. 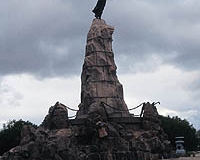 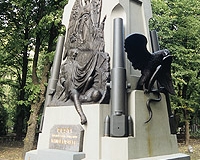 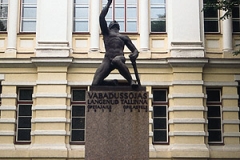 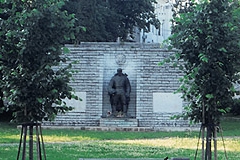 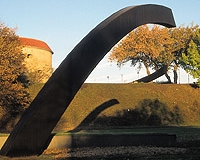 In the discussions concerning both cases Ö the reconstruction of the monuments to the War of Independence and the elimination of Soviet memorials Ö aesthetic considerations have been pushed into the background. Rebuilding the monuments of the War of Independence is an act of artistic reproduction, but in reality it lacks the aspect of creative art. For Estonians today, it allows a historical fact to be represented: the Estonian nation‰s struggle for independence between 1918 and 1920. Due to the fact that the monuments were destroyed by the Soviet authorities and later reconstructed, they also finally refer to the entire process of liberation Ö winning freedom, losing it, then regaining it. Their meaning has changed Ö when the monuments to the War of Independence were first erected in the 1920s and 1930s they were not so much monuments to ëvictory‰ but to the soldiers who had perished during the war. When the monuments were reproduced in the late 1980s-early 1990s, their main purpose was to symbolise the victory over Soviet power. So rebuilding the monuments to the War of Independence is definitely a political, not an aesthetic act. Although the defenders of the reproduction of old monuments have stressed the artistic value of old monuments, their argumentation has been purely rhetorical: mostly it has relied on the famous names that constitute the national art history and a more serious discussion of the conflict between the language of classical and modern art has not yet been initiated. It would seem that the postulation by Alois Riegl, i.e. that every work of art becomes a respectable monument only after two generations, is also valid in the case of Estonia. Or as Bachelard says in The Poetics of Space: ëmemories are motionless, and the more securely (i.e. the longer K.Kodres, M.Kalm) they are fixed in space, the sounder they are.‰

Initial location has also played very important role in the process of rebuilding the monuments to the War of Independence. If the reconstruction of the monument on the same spot is not possible, those reconstructing it have searched for another place which has been ëmonumentalised‰ by social practice and has as high a position in the city as possible, as regards historical and social status.

The claim that artistic quality of the monuments has not been the main issue in the discussion is further illustrated by the fact that when the Society of Art Historians stressed the artistic value of the Soviet monument on Tõnismägi in their public announcement and pointed out that it was the work of local sculptors already famous before the Soviet period, this was met with protests. When memories are still fresh, art does not matter.

Another problem connected with Soviet monuments is the belief that if a monument disappears, we also get rid of the unwanted episode of history it commemorates. The argumentation of those favouring the monument‰s destruction is linked to the main thesis of iconoclasm Ö if we destroy a ëpicture‰, we destroy its cause and its maker as well. We see the same phenomenon of ëout of sight, out of mind‰ with monuments as well: what irritates the public is not as much the symbols of foreign power which decorate the monument, as its location in an important place in the city centre. It is especially important to notice that as a last resort in the discussion the ëBronze Man‰, its opponents propose its being moved elsewhere. This is a ësoft‰ version of the same iconoclasm.

There are not many monuments in Estonia that commemorate facts that have no place on the political scale of right and wrong. Such is, however, the monument to the people who perished when the car ferry Estonia sank in 1994. Rather than attempting to reshape history according to one particular ideology, the monument‰s purpose is classical Ö to be a sign marking a tomb. The minimalist solution which consists of two lines that do not join up symbolises the idea of a journey stopped short. It was accepted without much ado, even though Estonian public opinion usually does not appreciate modern conceptual forms. The reason for this is that what is signified by the monument is more important than the signifier. Now, will time prove Riegl right, and two generations later the signified and the signifier will be seen as one Ö the form and the content will become the same, the idea will be condensed and conveying the message will become immediate, as one can now see in the case of the monuments to the War of Independence? It would also mean the adaptation of modern form on a broad scale Ö even though once again the reason would be not the form itself but the form as a body to historic memory. There is fortunately hardly a reason to predict, in the case of the Estonia, the iconoclasm that periodically occurs to historical monuments. This, on account of the fact that those to the Estonia are too apolitical.

Last we should remember that a monument (moneo in Latin) stands for ëcommemoration‰ but also for ëwarning‰ and ëadmonition‰. Political monuments ëremember‰ longer and more precisely because from time to time it is necessary to ërefresh‰ them in social practice, as are warnings and admonishments with and through them. A ëmore mundane‰ event like a shipwreck cannot mostly be used as an ideological argument and therefore nobody tries to constantly make an issue of it. Monuments as condensers of memory are not needed any more, and they start accumulating new meanings. As is the case with the monument to another shipwreck at the end of the 19th century, that of the Russalka, it may lose its original meaning and become simply a landmark.