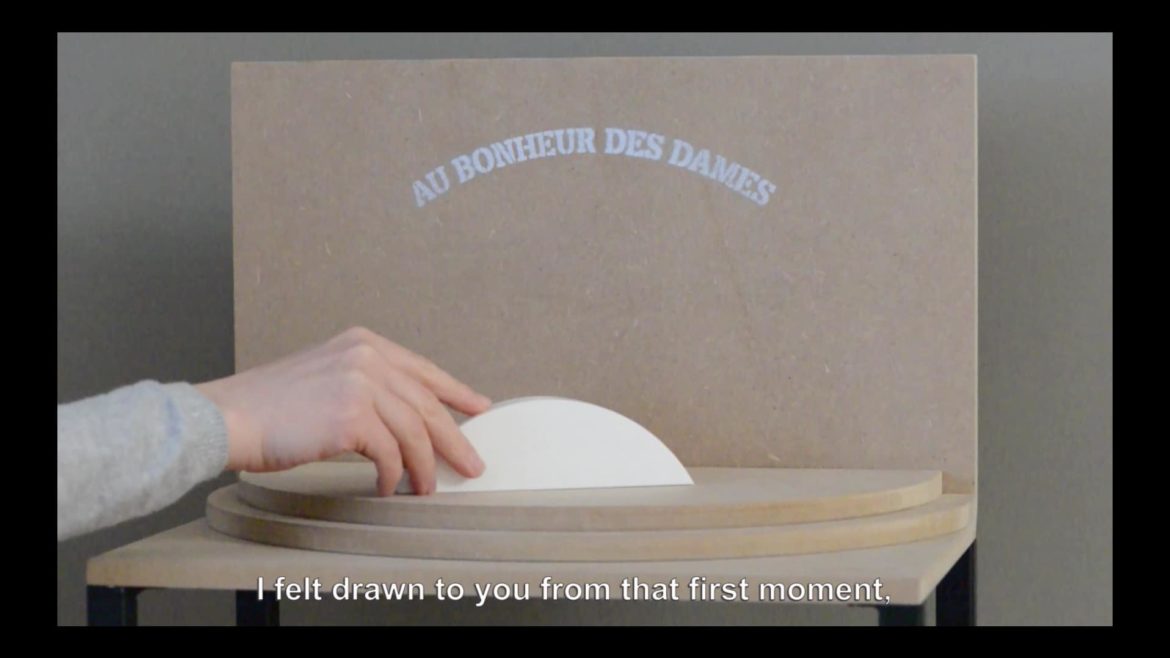 Marge Monko’s “Dear D” (2015) explores the basic dilemma of emotional disclosure: the act of declaring one’s attraction, even love, without any certainty as to its reception or the outcome. The piece is straightforward: it shows a computer screen where a love letter is taking shape, and the various other windows that the author navigates during the eight-minute exercise. The soundtrack consists of a female voice-over reading the emerging letter aloud.

The piece deals with the insecurities, vulnerabilities and risks that emotional disclosure entails should the love not be returned, for, as the author herself puts it, “affectations can bring about casualties” and “there is no zero-risk love”. With its confession of desire, the love e-mail taking shape on the screen moves from the realm of friendship to the uncertain possibilities of sexual encounter and the risks that the relationship may face in the course of this process. In addition, “Dear D” articulates the difficulties of making such disclosures in a culture saturated with depictions and analyses of romantic love and desire, from pop songs to films to literature, lowbrow and high, from autobiographical reflections to sociological analyses.

It is difficult to account for the particular hue and intensity of one’s affections, no matter how viscerally and acutely these may be felt, when the available words and phrases have been worn down by other people’s mouths, songs and texts, endlessly repeated. The words that seem to encapsulate the specific hues of emotional intensity animating one’s actions may well turn out to be the most banal ones, tested in social scripts of all kinds, as in the letter addressed to Dear D: “I’m intoxicated. I long for you every day”. The dilemma is not a novel one, and not specific to the early 21st century. The friction, or gap, between the intensely personal and the collectively recycled persists, and needs to be worked through.

In crafting her love letter, Monko’s author moves between windows and tabs on the computer screen, checks translations from English to Estonian, browses images and articles on the writers she refers to in her letter, listens to a Beatles tune she wants to quote and checks on accounts of physical attractiveness measured and explained to possibly understand her own cathexis of desire. The searches both support and rupture the flow of typing by shifting focus away from the singular – that which has happened, what is being felt and what may possible follow – to the networked, factually global flow of accounts of similar attractions and attachments.

Nearly real-time, the video witnesses the coming together of the longish letter on Gmail, which is aided by Google searches and Google translate. What in the not-so-distant past would have been an enterprise involving pen and paper, or possibly a typewriter, has grown into a networked, distributed act of multi-tasking, the rhythms of which correspond to the multi-stranded character of the endeavour itself: to express and to possibly understand personal experience and connection as unavoidably generic. As the corporate tech giant providing the infrastructure for such articulation and communication of intimacy, Google exercises tangible agency in how the act of textual emotional disclosure can come about, what elements it is to include and how the very process of formulating and crafting sentences has grown inseparable from constant horizontal calibrations for references, definitions and distractions on diverse web platforms.

As viewers, we witness the writer’s desktop and her movement across windows. The only human bodies seen are those on the computer screen within the screen that we are watching. The intimacy of the piece involves no displays of face, skin or body, let alone physical contact. The writer and her object of desire remain present through the means of language alone. Meanwhile, the voice reading the developing letter in “Dear D” remains soft and controlled, expressing no strong emotion and staying at the same tempo throughout. While this quality of voice brings the viewer-listener close, the piece holds her firmly at arm’s length, behind the screen, with access only to traces of communication taking place.

As the author writes in reference to sociologist Eva Illouz, “love letters have always been a fantasy, representing a better-articulated and sensitive self”. In other words, the exercise of writing a confessional love e-mail involves writing a particular kind of self into being. In the controlled space of the letter, displays of feeling and personality are easy to stylize, edit and fine-tune in ways virtually impossible to achieve in physical encounters animated by the intensities of the proximity, tone, scent, sight, actions, words and looks of the other. There can be pleasure in composing and re-reading such a letter, in terms of how the writing self comes across and the possibilities that such a letter opens up for both the writer and the recipient.

For Illouz, contemporary romantic love comes embedded in the interlaced fabrics of late capitalism and self-help culture. True love and its articulations have grown inseparable from the ever-accumulating reservoir of mass-produced words and images, the phrases, turns, scenes and dynamics of which have become internalised. On the one hand, this means that the ‘language of love’ is by necessity a reverberation or a remix, drawing from a range of representations and cultural templates. On the other hand, the foregrounding of emotions, and romantic love in particular, as a privileged arena of self-fulfilment also means that the suffering connected with it has come to occupy a central space in how people make sense of their selves and their lives. In the words of a popular song, “Love Hurts”, despite the thrills and intimacies it promises.

If conceptualisation is a means of generalising on the basis of the singular, then the singular is necessarily caught up in the general. Being aware of this, the author maps out her feelings in reference to the writer Siri Husvedt’s essay on romantic and erotic attraction, philosopher André Gorz’s account of his life-long love for his wife, and writer and filmmaker Kris Kraus’ novel “I Love Dick”. The latter consists of letters, with no replies, to a man who has become the object of the author’s obsessive desire yet fails to reciprocate much of the attraction. In “I Love Dick”, letters grow into diary inserts and lengthy self-reflections, where “Dick” ultimately becomes an instrument for the author processing her own self-understanding, marriage, career and future. It remains somewhat inconsequential as to whether these letters are ever sent to or read by the love object or not: the letters themselves become key objects of preoccupation around which the author’s creative energy revolves.

“Dear D” sets out to articulate the singularity of attraction against a network of intertextual references, models and samples of emotional disclosure. These templates allow for degrees of safety in the task at hand but also render it a somewhat scholarly, distanced one. On the one hand, there is the fact of the dense reservoir of words and sentences that has been used to express similar sentiment towards other people in other places that renders the individual effort a repetition on a theme both original and painfully not. On the other hand, the particular flutters of feeling remain evasive and difficult to capture within the available textual space. The author writes of wanting to see her love object’s face, even his mouth and teeth. She wants to hear him talk and laugh. She writes of his “lovely way of melodic sighing, which sounds almost like a voice exercise” and continues to ponder what patterns may lie behind attraction, both hers and those of others: indeed, “what is it that draws us to certain people?”

In “Lover’s Discourse”, Roland Barthes explores the scenes of first love, the resonances of intense attraction that make the beloved singularly unique as the focus of passion and interest, the pleasures of sex and embrace, the flames of possessiveness and jealousy, the sufferings and anxieties of waiting, as well as the eventual, gradual fading of the intensity of being in love. “Lover’s Discourse” is structured as an index of fragments laid out in alphabetical order, from “s’âbimer” (to be engulfed) to “vouloir-saisir” (will-to-possess). The fragments revolve around bodily desire but also around the dynamics and potentialities of language and writing. In fact, the two grow inseparable in how love can be communicated and made: “I can do everything with my language but not with my body. What I hide by my language, my body utters.” For Barthes, words themselves are thick with carnal resonance: vibrations that move the bodies speaking and listening, writing and reading. “Language is a skin: I rub my language against the other. It is as if I had words instead of fingers, or fingers at the tips of my words. My language trembles with desire.”

In the computer-aided exercise of emotional disclosure that it depicts, “Dear D” is fundamentally about the possibilities, limitations and contextual frames of language: reverberations of things read and heard, translations from one language to another and translations of intensities of feeling to textual terms. Like language generally, articulations of love develop as unique utterances that only make sense, and gain much of their power, from impersonal structures, dynamics and settings that precede the individual. The heartfelt may inescapably ring of cliché, yet the opportunity to rub language against the other, for language to tremble with desire, remains, even if the language comes in a format as impersonal as an e-mail.

Susanna Paasonen (b.1975) is a feminist cultural studies scholar and Professor of Media Studies at the University of Turku in Finland.