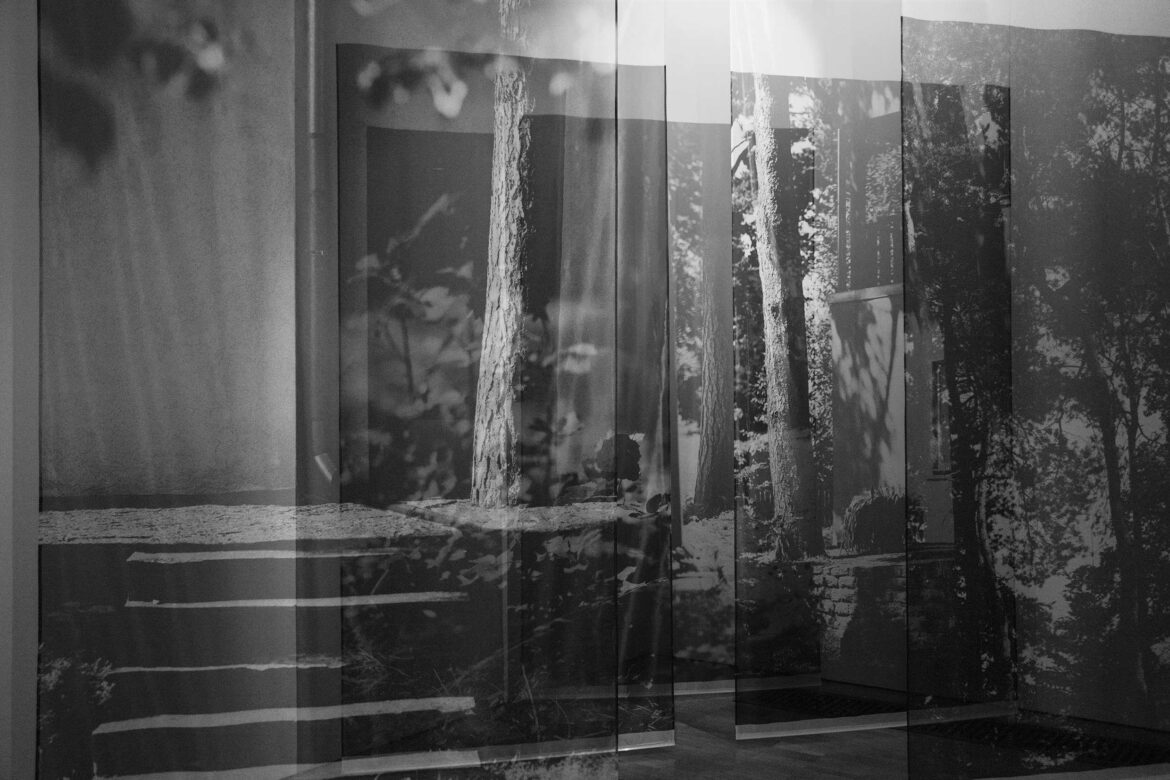 Garden Exile. A Study of the Sense of Nature

The exhibition “Garden Exile: The Tuglas’ Home Garden Through Tanja Muravskaja’s Camera Lens” in the Cabinet of Prints and Drawings at Kumu Art Museum brings together three parties: photographer Paul Horma, who documented the  garden belonging to writers Elo and Friedebert Tuglas in the suburb of Nõmme in Tallinn, the strong and charismatic photographic artist Tanja Muravskaja and the curator of the exhibition Elnara Taidre.

The starting point for the exhibition was three albums of black and white photographs compiled by the Tuglases themselves of their garden taken by Paul Horma between 1959 and 1961 at the request of the owners. The albums stood out as they focused solely on the garden and it could be seen that the arrangement of the photos was also well thought through, being carefully matched side by side. The pictures varied between general views and portraits of both the plants and the writers in the middle of nature, from close-ups of the few rare species to images of randomly growing semi-weeds. The classical documentary language, use of a standard lens and a viewpoint natural to the human eye all refer to a natural way of seeing, the aspiration of delivering a detailed and objective overview. One can distinguish a good balance between light and shadow, a good selection of the polychrome frame that preserves the grayscale dynamics in black and white photographs. The arrangement of the photographs in the albums was mostly based on aesthetic judgement, so, for example, there is also a picture of a young maple tree positioned upside down – it probably looked better this way. The photos present a diligently composed natural and abundant garden with walkways, arbors and a rock garden under the pine trees of Nõmme. Influenced by a romantic and impressionist concept of nature, the garden architecture follows an organic model rather than strict geometry.

And yet, why black and white photographs of garden plants and lush colourful summer flowers? What was the aim behind this rich collection of images; why were they taken? And how do they differ from contemporary vernacular photography and the digital images happy amateur gardeners share on social media platforms and turn into greeting cards and backgrounds for inspirational quotes using simple design programs? It was probably with similar questions in mind that in 2016 Tanja Muravskaja entered the Tuglas’ garden with her camera, taking these images as the starting point.

The title of the exhibition, “Garden Exile”, is a play on words. We know what exile means and we can imagine what it might be like to be ostracized from one’s country and acquaintances. The writer, editor and translator Friedebert Tuglas was not driven out of the country, he simply lived in exile here, in his homeland. The active left-wing writer, public figure in the Republic of Estonia and public speaker, suddenly became the target of controversial opinions in the early stages of Soviet-era Estonia: although, in 1946, he had been appointed an academic of the Estonian Soviet Socialist Republic and received the honorary title of national writer, only a few years later the tide had turned. He was expelled from the Writers’ Union of the Estonian SSR, his earlier work was removed from circulation and his name as a translator on the title pages of books was covered with ink. On the 16th of July 1950, by the decision of the Presidium of the Supreme Soviet of the Estonian SSR, he was deprived of the honorary title of national writer, which he regained in 1956 after Stalin’s death. During that same period, sculptor Paul Horma, the artist who took the photos, was also in a form of exile, having been expelled from the Artists’ Union from 1950 to 1963. During that time, he worked as a restorer. Before and after that period, he created many sculptural portraits of Estonian writers, among others the portraits of Elo and Friedebert Tuglas.

Gardening, photographing the garden (or arranging someone to do it) and creating albums of photographs is a therapeutic and creative endeavour: “It started over a year and a half ago, when our living conditions improved significantly. To keep our spirits up, we started to take care of the garden with a special zest” writes Friedebert Tuglas on the 26th of December 1970 to Marie Under and Artur Adson, the Estonian literary classics who had emigrated to Sweden. (It is also important to keep in mind that Tuglas’ house and garden were originally owned by Under and Adson who fled to Sweden in 1944.) At a time when they could not publish, their friends were too afraid to visit them and they did not have any correspondence, the writers turned to their garden, creating their own world out of it. They physically channelled their energy and attention to the only place that neither condemned nor abandoned them. In this way, the Tuglases were all at once the rulers, masters and prisoners of their own garden.

The garden as a symbol makes one think of oases and paradise – a safe confined area, familiar and personal, where strangers can enter only by permission. The garden is cultivated and offers an aesthetic experience, relief from stress, it does not wear one out with work. The garden is a possibility, while the field is an obligation. The garden also refers to monastery gardens, alluding to culture and cultivation, sustainability, care, as well as science and creation as viable values in the midst of a wild and barbaric world. At the same time, danger also lurks in the garden, harbouring a fruit that cannot be eaten and a snake that might want to tempt you. The oasis is also a fertile area in the desert. I believe that the Tuglases did not think in terms of such semiotic simplifications but lived and witnessed the multi-layered metaphoric qualities of the garden and nature in their everyday lives.
To talk about Tanja Muravskaja’s “Garden Exile”, I start with what is most surprising: the work is a black and white installation of nature photography, consisting of semi-transparent partly overlapping curtains or panes with large black and white photographic prints hanging from ceiling to floor. This is surprising, as the formal characteristics of the work are very different from Muravskaja’s practice to date. Black and white nature prints can be associated with Arne Maasik, the gardens with Eve Kiiler, and the use of a semi-transparent net makes one think of a conceptual photographic installation by Marge Monko. The artist has also used a light box in “Garden Exile”, there is a reflective pane on the floor of the exhibition space referring to the garden’s watery eye glancing light reflections onto the walls. The exhibition continues in Kumu’s garden where a large-scale black and white photograph of a garden stands out from the lush greenery, and where, by the rock garden, one can find and dig out Paul Horma’s photographs from the sand.

The exceptional character of the work, makes me think of an earlier collaboration between Muravskaja and the curator Elnara Taidre, which was also almost monochrome and consisted of a dialogue with another work of art. In the photographic pair “Untitled / Self-portrait I, II” (2015) Muravskaja presents herself as the black square on both a white and black studio background, wearing a black cape or cloth, emerging as a threatening figure on a white background, and blending in and becoming invisible against the black background. Muravskaja’s “I as Malevich’s Black Square” is a clever composition that reveals itself, like most good art works tend to do, in a simple, albeit not straightforward but rather a twisting and turning manner. It is a portrait in the studio – Muravskaja’s most common working method – but also an unexpected allegory. The nose and cheekbones emerging from the black hooded cape turn the black square into an Islamic burka covering the entire female body, which also appeared in one of her earlier works – the poster “Positions, Self-Portrait” (2007), where the artist stands in a black burka on a blue and white background. The dialogue with Malevich points to the Ukrainian origin of both artists and a positioning of oneself in the context of another nation. This brings us to the important political and interventionist element common to Muravskaja’s work. A black square on a black background evokes thoughts of merging, conforming and assimilating, while the artist embodying a black square on a white background appears intimidating and authoritative, which is again nullified by the submission involved in covering herself up, hiding the physical body behind a veil. As in “Garden Exile”, the varieties of the black square are contemplative and inward-looking.

What is Muravskaja doing that Horma hasn’t already done? Muravskaja has taken upon herself the difficult task of attempting to create and present the supposable experience of the Tuglas’ garden 60 years later, after the death of the writer, after the political conditions have completely changed. She has tried to capture the feelings the writer might have had while sitting in his office, looking out on the garden through the curtains fluttering in the wind. Compared to Horma’s objective and documentary approach, Muravskaja has taken over his monochrome style, but sought a much more natural vision with her camera – instead of surrendering to the modernist aim of objective photography, she has tried to find ways to put photography at the service of a subjective point of view. The main stylistic approach has been to distinguish the foreground from the background, using a shallow depth of field, using the gaze into the distance so that, for example, a tree branch hanging in the foreground becomes slightly blurred. This is yet another way to emphasize looking through, being in the moment, drifting, having perspective and moving towards something. The motif of translucent curtains or drapes invites us to experience nature as a whole, not conceiving it as a separate tree trunk, staircase or rose bush, but rather recognizing it as an intertwined and blended phenomenological process.

The whole setup creates a pleasant environment in the gallery, well balanced between poetic and informative content. The atmosphere is well supported by Elo and Friedebert Tuglas’ journals, letters and quotes from literary work, clearly communicating the writers’ relationship with their garden and attitude to nature in general. Yet, the gallery remains a gallery, it does not transform into an oasis, nor does the viewer feel as if in exile. Without doubt, “Garden Exile” is a nice study of nature, a great attempt to reconstruct a sense of nature by means of contemporary photography, and a step closer in contemplating how and why we need gardens also during politically calmer times. 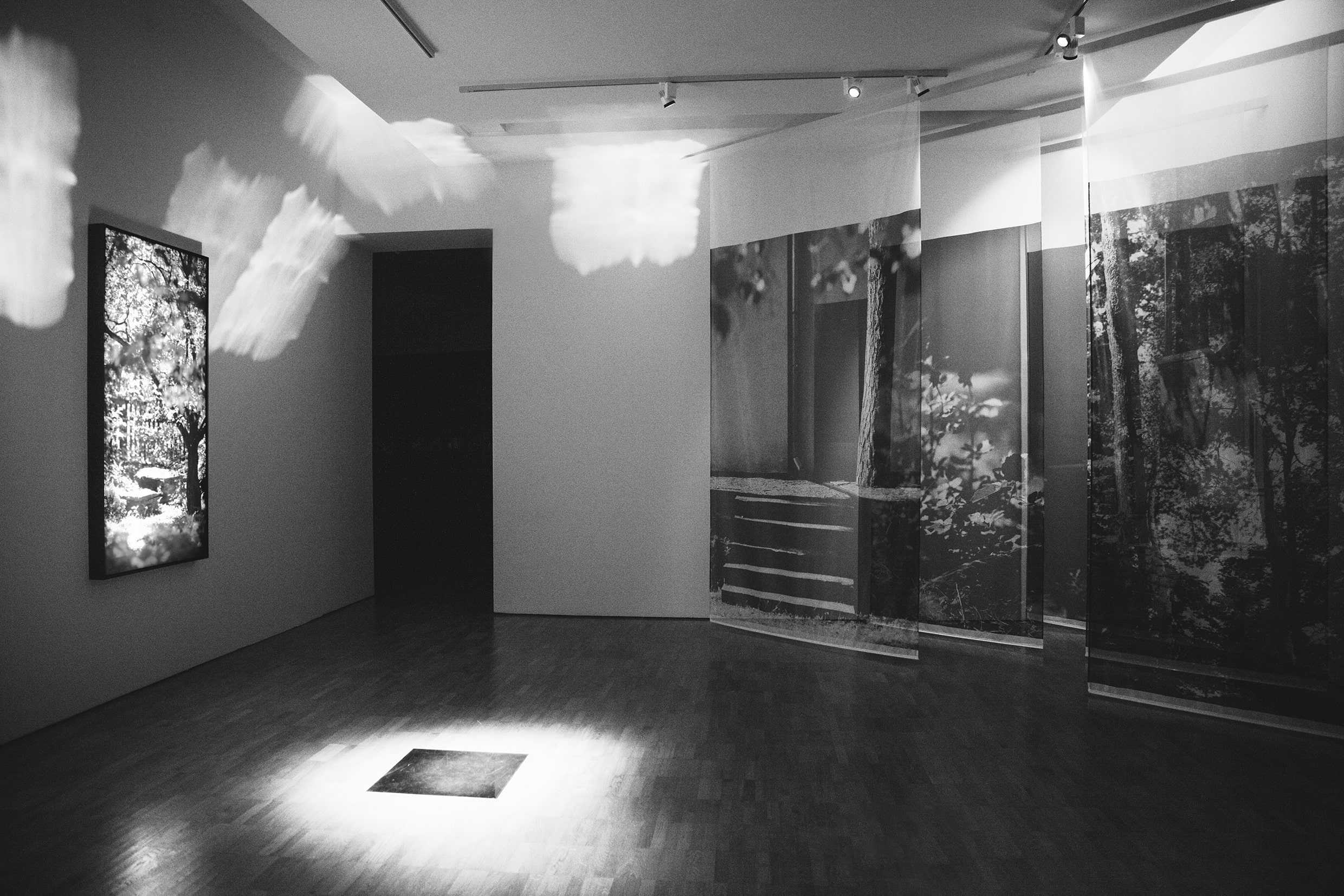 Anneli Porri is an Estonian art historian, curator and critic, as well as a lecturer at the Estonian Academy of Arts.